No backside, no problem! Some sea spiders can REGROW their rear ends after amputation – including muscles, reproductive organs and the anus, study finds

It has long been known that different types of arthropods, like centipedes and spiders, are able to grow back limbs after amputation.

Now, scientists have found that some sea spiders are also able to regrow their entire rear ends after losing them – including their anus.

Experts from the University of Greifswald in Germany have witnessed the Pycnogonum litorale sea spider grow back its hindgut, anus, muscles and parts of reproductive organs.

‘Nobody had expected this,’ said senior author Dr Gerhard Scholtz, from the Humboldt University in Berlin. ‘We were the first to show that this is possible.’ 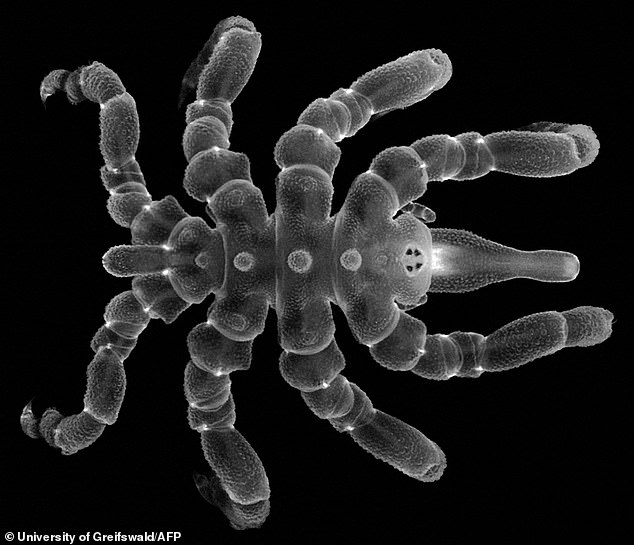 Experts from the University of Greifswald in Germany have witnessed the Pycnogonum litorale sea spider restore much more than just their legs. Pictured: Fully regenerated adult sea spider 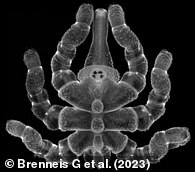 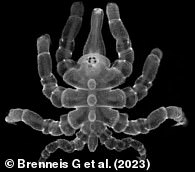 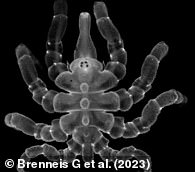 Regrowth of the posterior was observed in 14 of the young spiders, and 16 of them went on to moult at least once. Pictured: Sea spider regrows its hindgut, anus and two legs after three successive moults, each shown in left, centre and right images

Back in 2016, Dr Scholtz’s team witnessed a young sea spider regrow its leg, several months it was accidentally removed in the lab.

Sea spiders are so small that they keep some of their organs, like part of their digestive tract, in their legs.

The researchers also noticed that this spider had grown a gut diverticulum, or outgrowth, in its new leg, as well as part of an ovary. 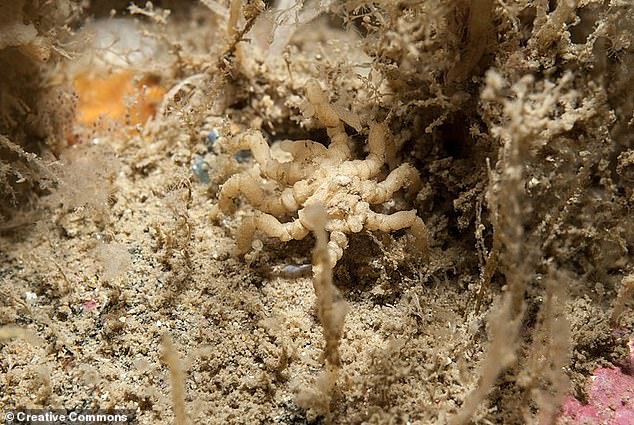 Sea spiders (pictured) are so small that they keep some of their organs, like part of their digestive tract, in their legs

Back in 2016 , Dr Scholtz’s team witnessed a young sea spider regrow its leg (pictured) several months after it was accidentally removed in the lab. Scale bar 5 mm 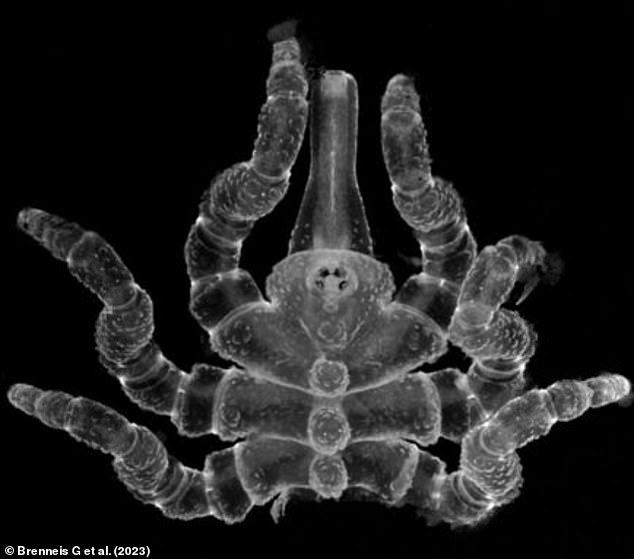 The team amputated different hind limbs and posterior parts of 19 immature and four adult sea spiders, and monitored the results. Pictured: Juvenile sea spider after the last quarter of its body, including two legs, hindgut and anus, were amputated

WHAT ARE SEA SPIDERS?

Sea spiders are marine arthropods which are distantly related to arachnids.

Like regular spiders, however, they also typically have eight main appendages – through which they also take in oxygen by means of diffusion.

They number in the region of 1,300 individual species.

Sea spiders range in size from just a few millimetres across to ones that span as much as 20 inches (50 centimetres).

While most commonly spotted in shallow waters, they can also live as deep as 23,000 feet (7,000 metres) underwater.

Sea spiders are carnivorous and either predatory or parasitic.

They will generally eat other creatures like sponges, moss animals and worms – while some take bites from, but do not completely kill, molluscs.

For the study, published in Proceedings of the National Academy of Sciences, the team set out to further investigate how much of its body P. litorale can regrow.

The researchers amputated different hind limbs and posterior parts of 19 immature and four adult sea spiders, and monitored the results.

Many of the juvenile specimens experienced a complete or a near-complete regeneration of the missing body parts.

Regrowth of the posterior was observed in 14 of the young spiders, and 16 of them went on to moult at least once.

Moulting is the process of shedding their existing exoskeleton when their body grows too large for it, and they have grown a new one that is folded up underneath.

However, the regrowth did not go perfectly every time, as some of the sea spiders only ended up with six or seven legs, rather than eight.

Indeed, two of the young spiders did not recover any part of their rear body after amputation, and survived with just four legs.

They also had no anus, so instead were forced to regurgitate their excrement through their mouths.

While 90 per cent of all the spiders survived long-term, none of the adult specimens moulted or regenerated.

Despite this, some of them are still alive two years later.

The researchers believe the older spiders’ lack of ability to regenerate is linked to the fact that they no longer moult their tough exoskeleton. 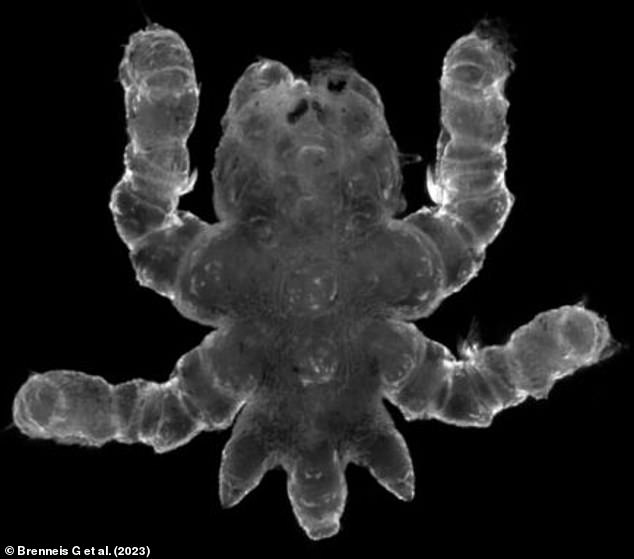 However, the regrowth did not go perfectly every time, as some of the spiders only ended up with six or seven legs rather than eight. Pictured: An amputated sea spider with three stubs which could reform into its rear two body segments. These would include its two pairs of hind legs as well as its anus and hindgut

Flatworms, for example, can regrow their body from just a few cells.

‘Crabs can even automatically get rid of their limbs if they are attacked,’ said Dr Scholtz. ‘They replace it by a new limb.’

Vertebrates, which include humans, have virtually no regeneration capability, with some exceptions such as lizards which can regrow tails. 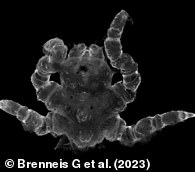 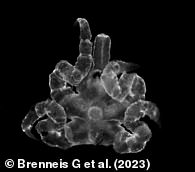 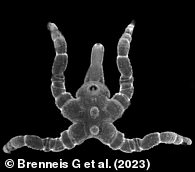 Left: An amputated sea spider missing both its rear body segments and any stubs that could reform them. Centre: After this spider’s first moult, it shows no sign of regrowth. Right: After its third moult it still had not regrown any of its missing body parts. As it had no anus, it was forced to regurgitate its excrement through its mouth

Dr Scholtz said the findings could pave the way for further research in the field.

‘There’s a wealth of different species that can be tested in this way,’ he said.

The next step may be to try to discover the mechanism behind the regrowth, and see if any other arthropods possess this ability.

‘We can try to find out on the cellular level and the molecular level what indicates the regeneration,’ he said.

‘Perhaps there are stem cells involved which are undifferentiated cells that can assume new shape and fate?’

He added: ‘In the end, maybe the mechanisms we detect in arthropods may help medical treatments of limb loss or finger loss and so on in humans. This is always the hope.’

Nightmarish giant sea spiders breathe through holes in their legs that get bigger as they grow, allowing them to take in more oxygen, a new study has found.

Scientists have wondered for decades why marine animals that live in the polar oceans and the deep sea can reach giant sizes there, but nowhere else.

One leading theory is that animals living in extreme cold can grow to giant sizes because their metabolisms are very slow.

They found that increasingly big pores that cover their legs, which researchers compared to Swiss cheese, let the spiders grow to beyond their expected size even in warm waters. 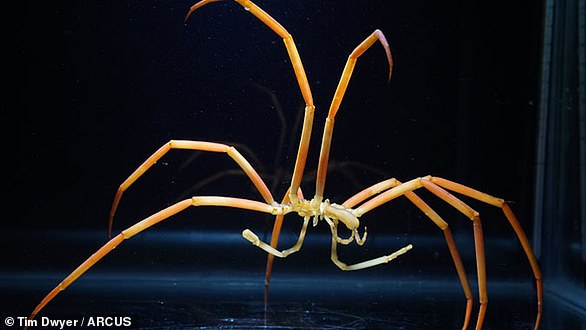 Sea spiders are nightmarish-looking creatures that scuttle along the deep sea floor on their eight disproportionately long legs. Found across the globe, they are carnivores that feast on sponges, moss animals and worms