A volcano that sits off the coast of Indonesia could cause the global economy to collapse, and experts warn it is due to erupt.

Mount Merapi sits 1,129 miles from the Strait of Malacca, which has been described as the world’s chokepoint.

The waterway sees 90,000 ships travel through the narrow channel every day carrying grain, crude oil and every type of commodity on the market.

The more than 9,000-foot-tall volcano would shoot a cloud of ash 21 miles above the route that caters to 40 percent of the global trade, along with blanketing Earth in a volcanic winter for three years.

The dramatic drop in temperature would lead to global food shortages, inflation and climate abnormalities, according to a stark warning from researchers at the University of Cambridge.

And these disasters would cost the world an estimated $2.51 trillion. 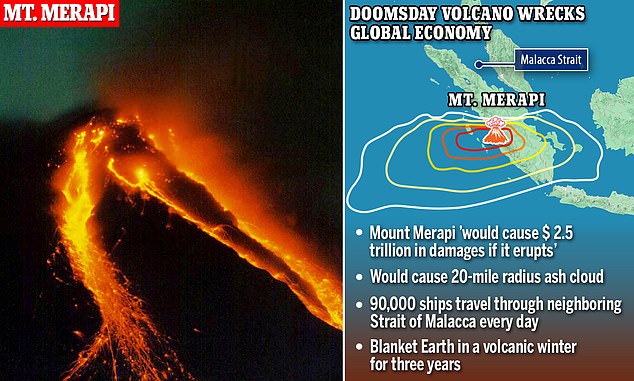 While Mount Merapi currently lies dormant, it did experience a devastating eruption in 1006 that wiped out the entire existing Hindu kingdom that once lived in central Java.

The volcano’s last major eruption was in 2010, which sent a plume of volcanic ash more than 2,000 feet above the crater and killed 353 people.

A series of photos of the Indonesian volcano Mount Merapi has gone viral after a photographer captured images that look like a laser is erupting from the massive peak, but it’s most likely a meteorite, according to experts.

The team at the University of Cambridge released a report detailing potential doomsday scenarios for when Mount Merapi awakens with rage.

The ash cloud would be carried miles away from the volcano to various airports across Indonesia, Malaysia and Singapore, halting all aviation activity.

The region is one of the busiest airspaces in the world, with the aerial route between both cities alone comprising over 5.5 million seats per year, according to a 2021 study published in Nature.

This would pause tourism in all the countries, which would lose billions of dollars – it is a $3.35 billion industry for Indonesia alone.

Lara Mani, a volcanologist at the University of Cambridge’s Centre for the Study of Existential Risk, told BBC that Volcanic Explosivity Index (VEI) four through six is enough to disrupt the trading channel – the highest the index goes is up to eight.

But the rest of the world would also suffer from Mount Merapi erupting.

‘Global mean temperatures fall 1°C for up to three years, resulting in severe climate abnormalities that lead to major global food shortages,’ the University of Cambridge shared in the report.

‘Unpredictable rainfall patterns and unusually low summer temperatures cause massive crop failures across the world, leading to soaring food prices and high global inflation in the summer months of the second year. 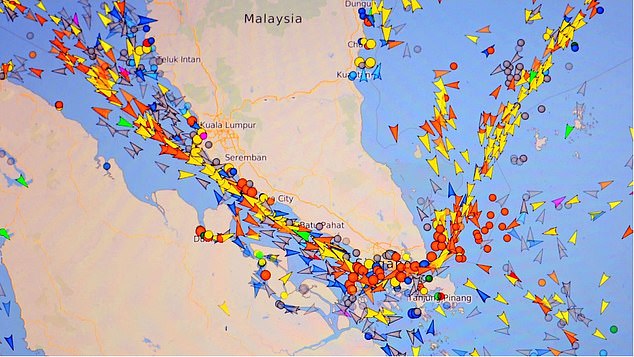 The volcano is near the Strait of Malacca, which sees 90,000 ships travel through the narrow channel every day carrying grain, crude oil and every type of commodity on the market. 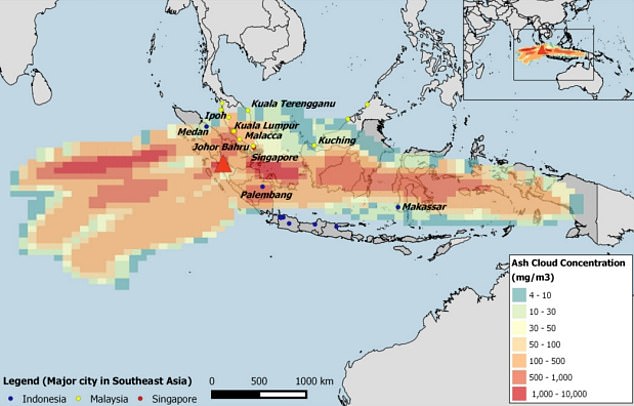 Mount Merapi would shoot a cloud of ash 21 miles above the route that caters to 40 percent of the global trade, along with blanketing Earth in a volcanic winter for three years

‘It is not until the beginning of the third year after the eruption that technological advances catch up with the crisis and help to rebalance global food supply and demand.’

This region is also highly active volcanically, with numerous volcanic centers present along the Indonesian archipelago, such as Mount Sinabung (VEI 4) and Mount Toba in Sumatra, and Mount Merapi (VEI 4) in Central Java.

Mount Semeru, also known as Mahaneru, has erupted several times over the past few centuries.

However, its most recent eruption occurred in December 2022, causing smoke flumes to shoot over a mile high.

The eruption from Mount Semeru, the highest mountain in Indonesia, caused authorities to alert the neighboring communities. 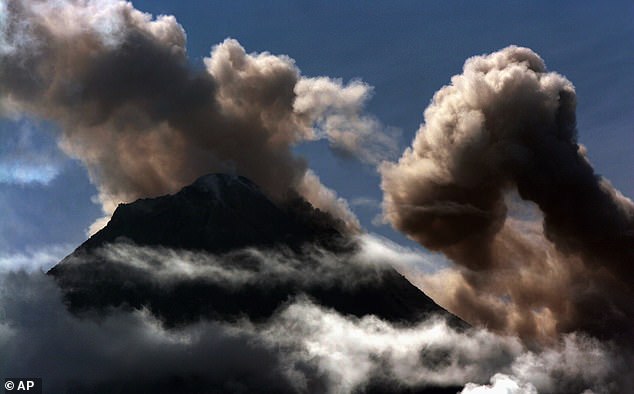 The volcano’s last major eruption was in 2010 (pictured), which sent a plume of volcanic ash more than 2,000 feet above the crater and killed 353 people 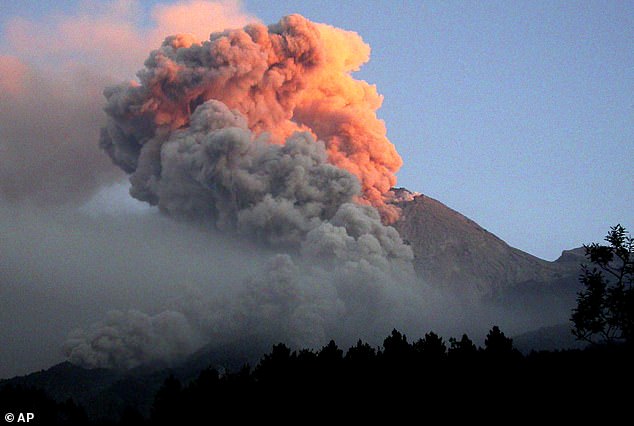 The team at the University of Cambridge released a report detailing potential doomsday scenarios for when Mount Merapi awakens with rage. Pictured is Mount Merapi erupting in 2006

Mount Tambora had one of its largest eruptions in 1815, causing crops to die as far as Europe. This led to food shortages worldwide.

‘The death toll of the 1815 event was 11,000 from pyroclastic flows and more than 100,000 from the resulting food shortages over the following decade,’ said the National Environmental Satellite Data and Information Service said on their website.

The Tambora eruption was a magnitude VEI7, but a volcanic blast this intense happens once every few hundred years.

Although nothing can be done to prevent natural disasters from reaching the Strait of Malacca, there are possible ways to send out early-warning systems and signs to warn people of an impending disaster.