Nearly two-thirds of coral reef shark and ray species are at risk of EXTINCTION – with overfishing named as the biggest threat, study reveals

Nearly two-thirds of coral reef shark and ray species are at risk of extinction, with overfishing named as the biggest threat, a new study has found.

The study looked the species on the International Union for Conservation of Nature (IUCN) Red List, threatened with extinction.

Researchers studied 134 shark and ray species, and say the findings indicate the need for immediate conservation action on coral reefs. 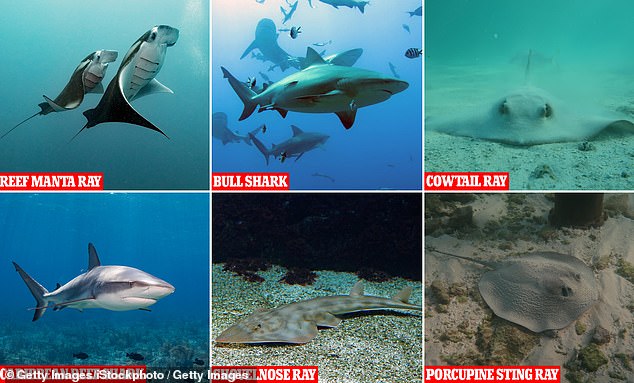 Just some of the endangered coral reef sharks and rays at risk of becoming extinct, according to a study published in Nature Communications

The study, conducted by researchers at the Simon Fraser University in Vancouver, found 59 per cent of coral reef shark and ray species are threatened with extinction.

There are 14 species, five sharks and nine rays, that are listed as Critically Endangered.

As a result of climate change, coral reefs are some of the most fragile ecosystems in the world.

In the study, published in Nature Communications, researchers from Simon Fraser University in Vancouver, led by Dr Samantha Sherman, said: ‘Population declines have occurred over more than half a century, with the greatest declines prior to 2005.

‘Immediate action through local protections, combined with broad-scale fisheries management and Marine Protected Areas, is required to avoid extinctions and the loss of critical ecosystem function condemning reefs to a loss of shark and ray biodiversity and ecosystem services, limiting livelihoods and food security.’

There are currently 150,388 species worldwide on the ICUN Red list, with 42,108 of those being threatened with extinction.

This means 28 per cent of all species could disappear off the face of the Earth if action is not taken.

The IUCN estimates that around 37 per cent of all types of sharks and rays, in all habitats, are facing extinction.

The study by Dr Sherman further revealed that the extinction risk of sharks and rays who live in and around coral reefs, as a percentage of threatened species, is almost double that of all 1,199 known shark and ray species.

The fact that 59 per cent of coral reef sharks and rays, including the topeshark and coach whipray, are endangered means that they are the second most threatened group in the world. 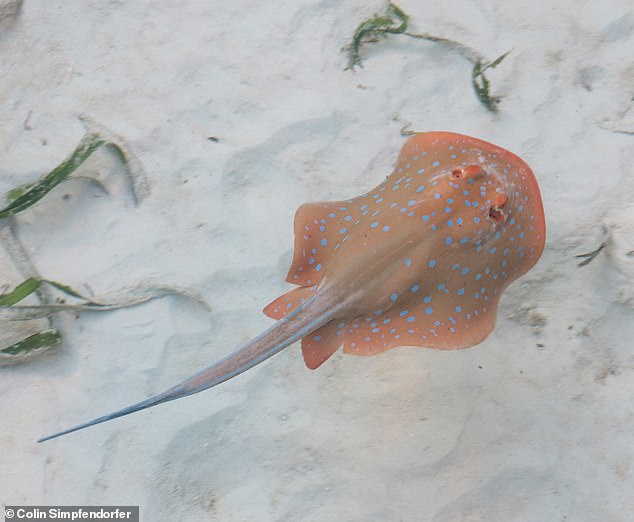 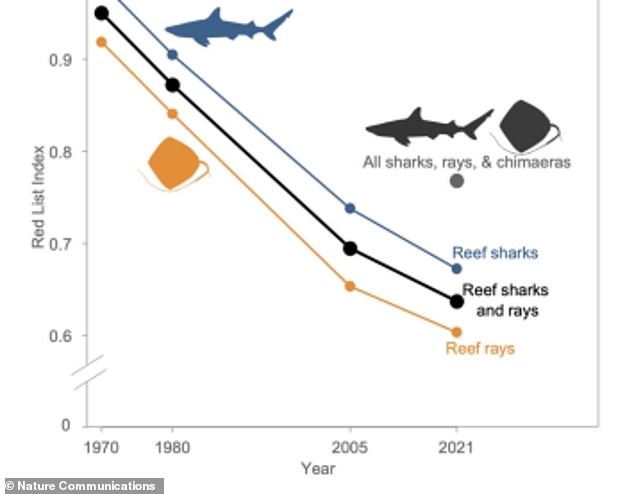 Graph shows the increase in extinction risks of coral reef sharks and rays over the past half century, comparing dates from 1970, 1980,2005 and 2021

How many species are threatened with extinction?

According to the International Union for Conservation of Nature (IUCN) Red List, 42,100 species are threatened with extinction.

That amounts to 28 per cent of all species.

They are just behind marine mammals, such as dolphins and manatees.

Most of the shark and ray species (around 70 per cent) saw a decline in population levels, with only 10 per cent remaining stable.

Overall, rays were more threatened than sharks, with only the bluespotted ribbontail ray seeing its population increase.

For larger species such as Bull sharks and Reef Manta Rays, who live off the reef, extinction risk is greater.

Several reasons were given for the increased threat of extinction, including loss of habitat and climate change.

Overfishing, however, accounted for 75 per cent of the sharks and rays studied.

Fishermen targeting sharks or rays were a threat for two thirds of the species, whereas unintentional catching was a threat for 98 per cent of species.

Of the 134 species measured, 109 were still being used in some form for human consumption.

This included creating leather out of ray skin and selling fins and shark meat on the international market.

In countries with greater fishing pressures and weaker governments, such as Brazil, Tanzania and Indonesia, extinction risk of sharks and rays was even greater. 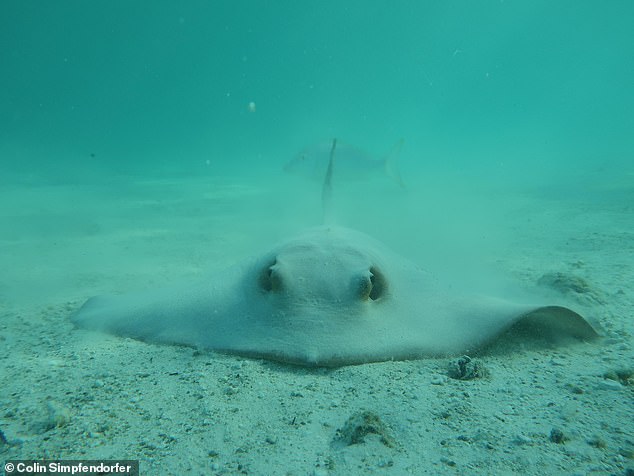 The study found 59 per cent of coral reef shark and ray species are threatened with extinction. Pictured: a cowtail ray in the sand 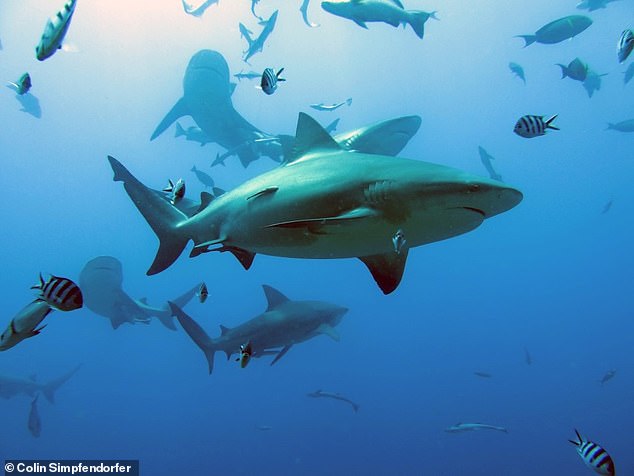 For larger species such as Bull sharks and Reef Manta Rays, who live off the reef, extinction risk is greater

The IUCN’s Red List of Threatened Species was created in 1964.

It has since evolved to provide a comprehensive list of animals, fungus and plant species most at risk from extinction.

It provides information about population size, habitat and ecology.

It documents each species use or trade, threats and conservation decisions made to help protect the species.

The paper concluded that, if conservations efforts to improve sharks and rays are not improved, the health of coral reefs could continue to decline, with negative effects for millions of people that rely on them.

It said: ‘Sharks and rays are key functional components of coral reef ecosystems, yet many populations of a few species exhibit signs of depletion and local extinctions.

‘Alongside marine mammals, sharks and rays are among the most threatened groups found on coral reefs.

‘Overfishing is the main cause of elevated extinction risk, compounded by climate change and habitat degradation.

‘The question is whether these declines forewarn of a global extinction crisis.’

Coral reefs are becoming an increasingly at-risk habitat that are extremely sensitive to small changes in their environment.

A University of Hawaii study found that half of the Earth’s coral reefs will be permanently damaged by 2035 if climate change continues unabated.

This was based on the effects of sea surface temperature, ocean acidification, tropical storms, land use and the human population.

Their results revealed that, when looking at a single stressor under current conditions, half of the world’s coral reefs will be permanently damaged by 2050.

However, when multiple stressors are considered, this date falls to 2035.