Ancient Egyptian tomb dating back 3,500 years may be the final resting place of one of the QUEENS or princesses of the 18th Dynasty, experts say

Archeologists have uncovered an ancient Egyptian tomb dating back 3,500 years that may hold the remains of an 18th dynasty royal.

The never-before-seen tomb was unearthed by British and Egyptian researchers on the west bank of the River Nile, in the modern day Egyptian city of Luxor.

It’s close to the Valley of the Kings, one of the country’s main tourist attractions, situated next to the Giza pyramid complex.

Although the tomb is in a poor state of preservation, it could date to the era of famous Egyptian pharaohs Akhenaton and Tutankhamun. 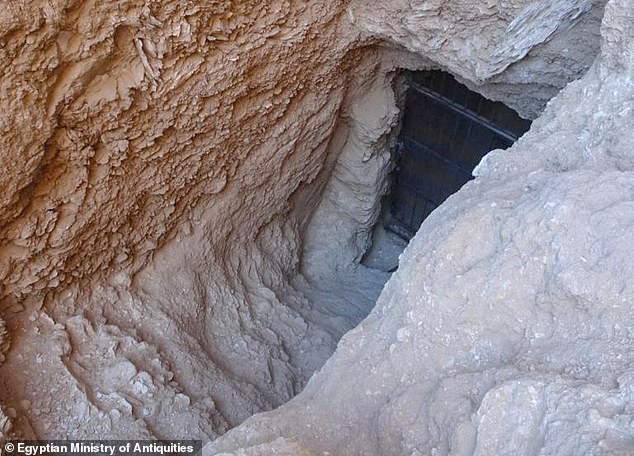 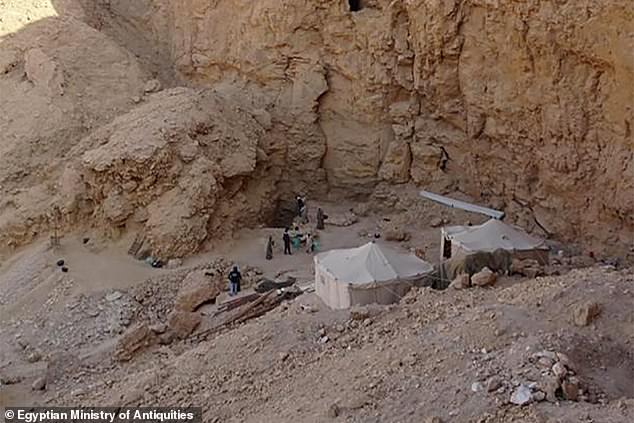 The new tomb, probably that of a royal wife of the 18th dynasty, which features kings such as Akhenaten and Tutankhamun nearly 3,500 years ago, was discovered in Luxor, on the west bank of the Nile. Pictured, a view of archaeologists working on the site

The 18th Dynasty of Ancient Egypt (1550 BC to 1292 BC) was the first dynasty of the New Kingdom, a period when Egypt became a global power.

This dynasty ended in 1292 BC after around 300 years and is now considered among the most prosperous years of Ancient Egypt.

Also known as the Thutmosid dynasty, it includes some of Egypt’s most famous pharaohs, including Tutankhamun, Hatshepsut and Akhenaten.

However, who exactly is inside the tomb is a mystery – for now.

‘The first elements discovered so far inside the tomb seem to indicate that it dates back to the 18th dynasty,’ said Mostafa Waziri, head of Egypt’s Supreme Council of Antiquities.

The 18th Dynasty of Ancient Egypt (1550 BC to 1292 BC) was the first dynasty of the New Kingdom, a period when Egypt truly became a global power.

Also known as the Thutmosid dynasty, it features some of Egypt’s most famous pharaohs, including Tutankhamun, Hatshepsut and Akhenaten.

Piers Litherland at the University of Cambridge, head of the British research mission, said the tomb could be of a royal wife or princess of Thutmosid lineage.

They ‘probably belonged to one of the royal wives or princesses during the period of Thutmosid rule’, he told The Times.

However, he ruled out any chances of it containing the remains of Nefertiti, one of the most famous queens of the dynasty.

Known for her great beauty and power, Nefertiti is thought to have been stepmother of the boy-pharaoh King Tutankhamun.

But the location of Nefertiti’s resting place has triggered speculation for decades. 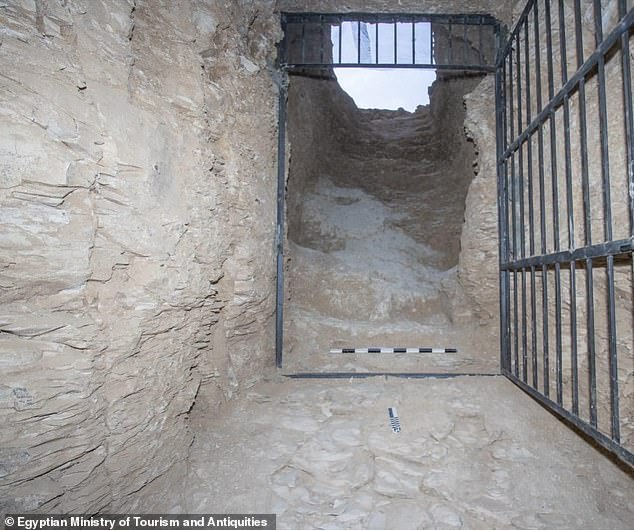 Photo shows inside the entrance of the tomb looking out. The tomb has been secured with a metal gate to prevent looting 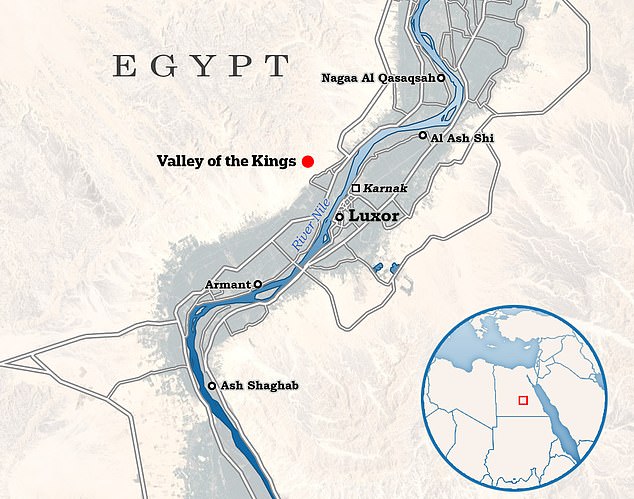 The never-before-seen tomb was unearthed by British and Egyptian researchers on the west bank of the River Nile, in the modern day Egyptian city of Luxor

A treasure of ornate gold jewellery delicately placed on the remains of a young woman who died 3,500 years ago has been unearthed in an ancient Egyptian city built by King Tutankhamun’s father.

Archaeologists found the woman, wrapped in textile and plant-fiber matting, wearing a necklace with raindrop-shaped pendants, three wrings and soapstone.

She was buried in the Tombs of the Nobles at Amarna, a cemetery designed for courtiers and elites of the city formally known as Akhetaten, suggests a woman of power.

Parts of it, including inscriptions, were ‘destroyed in ancient floods which filled the burial chambers with sand and limestone sediment’, he added.

It’s unclear whether a coffin has been found inside the tomb.

MailOnline has contacted the Ministry of Antiquities for more information.

Egypt has unveiled several major archaeological discoveries in recent years, most notably in the Saqqara necropolis south of the capital Cairo.

Last year, a pink granite sarcophagus of Ptah-em-wia, a high-ranking Egyptian noble who served as head of the treasury under Ramses the Great, was found in the necropolis.

Inscribed on all sides with emblems, hiéroglyphs and titles, the up to 3,300-year-old stone coffin was found in pristine condition and in its original tomb 23 feet underground.

Egypt’s Ministry of Tourism and Antiquities also announced last year the discovery of mummies in Qewaisna necropolis with golden tongues in their mouths.

It’s thought their real tongues would have been removed during embalming and replaced with the gold object so the deceased could speak to Osiris in the afterlife.

In Egyptian mythology, Osiris is the ‘Lord of the Underworld’ and judge of the dead, and one of the most important gods of ancient Egypt.

However, possibly the biggest discovery of 2022 was an underground tunnel beneath Taposiris Magna Temple, which experts believe may lead to the long-lost tomb of Cleopatra, one of the most famous queens in history.

Cleopatra was Egypt’s last pharaoh and the ruler of the Ptolemaic Kingdom of Egypt, from 51 BC until her death 30 BC, at the age of just 39. 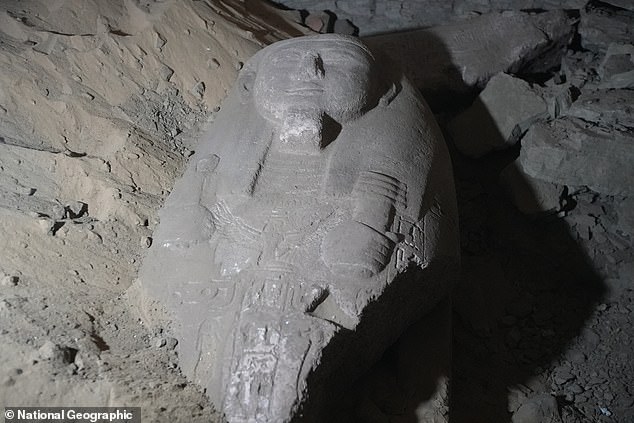 In 2022, a pink granite sarcophagus of Ptah-em-wia, a high-ranking Egyptian noble who served as head of the treasury under Ramses the Great, was found in the Saqqara necropolis 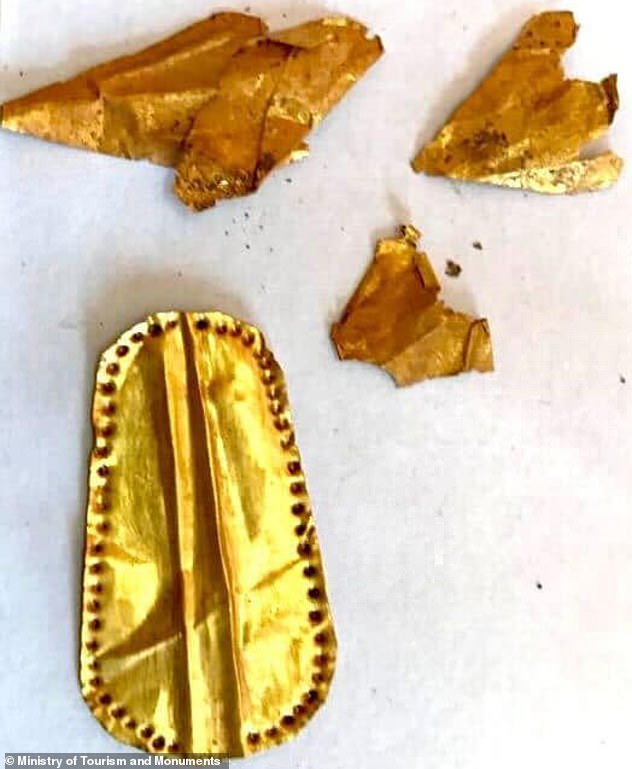 Famous for her seductive personality, she is thought to have been interred together with her lover Mark Antony.

Experts believe Cleopatra made plans for herself and Antony to be buried at  Taposiris Magna in order to imitate the ancient myth of Isis and Osiris.

According to the myth, Osiris was hacked into pieces that were scattered across Egypt before Isis was able to find all of the pieces and resurrect him.

Recent discoveries have been a key component of Egypt’s attempts to revive its vital tourism industry, the crowning jewel of which is the long-delayed inauguration of the Grand Egyptian Museum at the foot of the pyramids.

The archaeological museum under construction in Giza is set to open this year, although there is no announced opening date.

Has Cleopatra’s tomb been FOUND? Tunnel carved in rock is discovered 43 feet below an ancient temple that may lead to her long-lost burial site

A tunnel carved through layers of rock has been discovered beneath Egypt’s ancient Taposiris Magna Temple, which may lead to the long-lost tomb of Cleopatra.

The tunnel, which is being hailed as a ‘geometric miracle’, stretches for more than 4,800 feet and measures about six feet high.

Archaeologist Kathleen Martinez of the University of San Domingo has been convinced for more than a decade that Egypt’s last pharaoh Cleopatra and her lover Mark Antony were laid to rest within the temple, and is sure the tunnel could be the path to this discovery. 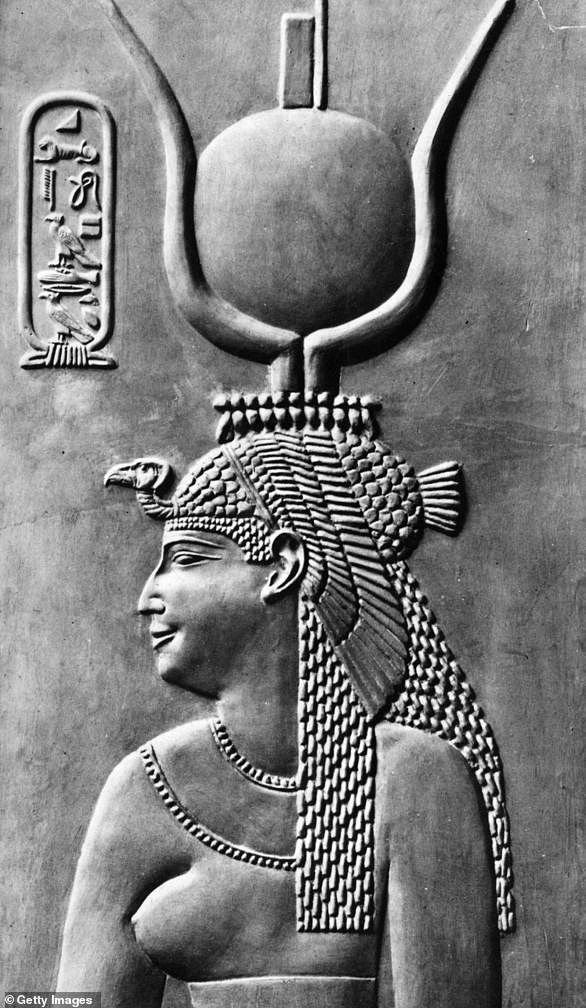 Cleopatra ruled from 51 BC to 30 BC – right up until the day she died. She was the queen of Egypt and the last and most famous of the Ptolemaic dynasty

The Taposiris Magna Temple, whose name means ‘great tomb of Osiris’, is located near the Egyptian city of Alexandria, once the country’s capital.

Martinez said there’s a good chance the queen is buried there and if she is, finding the remains of Egypt’s last pharaoh would be ‘the most important discovery of the 21st century.’