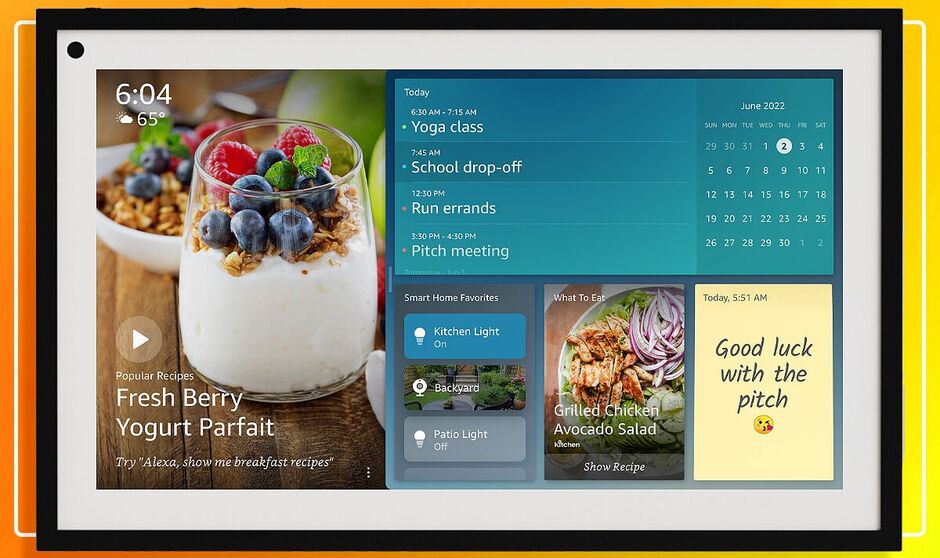 If you fancy an Echo with a screen you’re not exactly spoilt for choice right now. The online retailer has an extensive range of display-packed devices including the cute Echo Show 5 and bizarre Echo Show 10 which follows you around the room like an overly excited puppy. Now there’s another new Echo Show joining the ranks and this time it’s gone supersized. The Show 15 arrives packing a giant 15.6-inch full HD screen and a design that’s been created to make it look just like a picture.

The Echo Show 15 features a huge display that comes packed with widgets to help guide you through your day. It can be mounted on the wall and even used as mini TV.

The concept is pretty simple with Amazon wanting customers to stick this device to their walls and use it as an interactive photo frame. It’s a really neat idea but does it actually work and is it worth the whopping £240 asking price?

Express.co.uk has been putting the Echo Show 15 through its paces and here’s what we think of it.

Right out of the box Amazon has made things super simple to set up and install. Switch the speaker on, link it to your Amazon account and you’ll be barking orders at the ever-helpful Alexa assistant in a matter of minutes. It’s so super easy that even the biggest technophobes shouldn’t have any issues getting things up and running.

As we mentioned earlier, the Show 15 has been designed to cling to your walls with Amazon including everything you need to keep it firmly in place.

You’re going to need some basic DIY skills and a drill to get it installed but we found it all pretty easy with the supplied mount making sure the screen stays securely positioned in place. One thing to note is that this device needs power from the mains so you will end up with a cable dangling down from underneath the frame which does slightly spoil the appearance.

Amazon also only supplies this device with around a metre of lead so make sure you place the Show 15 close enough to the power sockets otherwise you’ll need to add an extension cable to your shopping basket which costs around £13.

If you don’t want the Show 15 drilled into your freshly painted plasterboard then you can also mount it on stand although this isn’t included in the box and will set you back another £30.

Once things are all set up the Show 15 is pretty useful as it not only does all the usual things such as setting timers, showing weather conditions and the day’s news but you can also pack the large display with a bunch of widgets to help guide you through the day.

There are Sticky Notes, To-do Lists, Shopping Lists, Calendars and Alexa Tips. You can also see the day’s weather, recent music playlists plus there’s quick access to all of your favourite smart home gadgets such as light bulbs and thermostats.

Glancing at the screen and seeing all of this information makes it ideal for busy homes and should mean nobody forgets to take the dog for a walk or buy some milk from the local shop. To make things more personal, the Show 15 can also be switched into a photo frame mode which will then display all of your family albums – it’s a really nice touch.

There are also stunning landscape images pre-installed on the Show which will certainly brighten up a dull corner of your room.

Another great feature of that 15.6-inch screen is that you can watch TV on it thanks to compatibility with services such as Netflix, YouTube and Prime Video. Just ask Alexa to launch these servcies and the display will spring into action and soon be full of things to view.

It’s all good stuff although, sadly, there are still quite a few platforms that don’t work with Echo Show devices including Disney+ and BBC’s iPlayer. The Echo Show 15 feels like the first screen that could really take advantage of these hugely popular video players and the missing content is something Amazon really needs to fix.

That lack of Disney and BBC shows isn’t our only gripe as there are some other niggles to be aware of.

Firstly, although the screen is bright, colours do appear a little dull and there’s no way to boost the contrast or make things more punchy.

Then there’s the pretty terrible sound. Amazon’s design team has popped the speakers on the back of the device and, if mounted on the wall, the audio becomes really muffled.

If you’re simply using the Show 15 as a big screen this won’t be a concern but it’s pretty annoying if you’re hoping to listen to music all day or settle down for a blockbuster Netflix binge.

Then there are those useful widgets. All the pre-installed options are great but Amazon could definitely do with including more third-party services. Latest action from BBC Sport, access to your Facebook feed or a glance at Google Maps would all be welcomed although we doubt they will ever make an appearance on this device.

It would also be nice if you could change the size and shape of the widgets as they currently sit in a grid that can’t be customised. That means you can’t slap a Sticky Note over everything to remind you of an event or make a shopping list more visible on the screen.

It’s a real shame and it’s something the team at Amazon might want to address in future updates.

One final thing that’s pretty annoying is the speed of the screen. Swipes and taps seem to constantly stutter and it always feels one step behind your finger. The experience is definitely not as slick as other Echo devices we’ve used.

PROS: Big screen is useful • Easy to set up and install • Alexa remains one of the best assistants
CONS: Very expensive • Sound quality is terrible • Needs more widgets and more ways to customise them • No Disney+ or iPlayer

The Echo Show is back and bigger than ever. This 15.6-inch device clips neatly to your walls and offers a fun and pretty useful way to use Alexa.

The large screen means you can pack it full of those widgets or use it as a way to binge on the odd boxset.

The fact it looks just like a photo frame means it won’t appear out of place even in the most style-conscious of homes and there’s the brilliant Alexa assistant who will answer pretty much anything you ask of it.

At over £230 it is pricey and we do have some niggles with the quality of the screen and dismal sound.

We also hope Amazon releases a software update that brings more ways to customise the screen and speed things up a little.

Despite those gripes, we like what Amazon has created and, with a few tweaks, we could see plenty of homes loving everything the Show 15 has to offer.