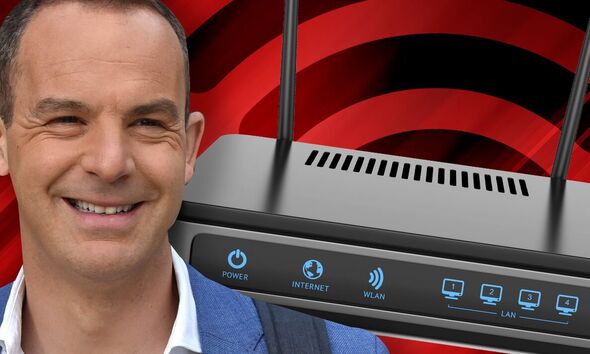 If you think your broadband isn’t up to speed then there’s a very simple test you can try today. The top tip was revealed by Martin Lewis on his popular ITV Money Show last night with the MoneySavingExpert urging viewers to give it a try. Anyone who is certain that their downloads are dismal should grab their laptop and run a quick speed test using their Wi-Fi.

Once finished, note down the result then take the portable PC to the room where the router is positioned and try the same test using a wired Ethernet connection. If the speed is faster via a cable then it’s not your supplier that’s letting you down but your Wi-Fi instead.

“Go online and do a speed test on your computer,” Martin Lewis said. “Then, if you possibly can and have a laptop you can plug an Ethernet cable into, go and do it when it’s wired in.

“If it’s much, much faster when it’s wired it’s probably your router or your router position that’s wrong. It’s the signal in the house, not to the house that’s the problem.”

If there is a big difference between wired and wireless speeds then it’s a good idea to make sure your router is placed out in the open, as high up as possible and doesn’t have anything blocking the signal. Even objects such as fish tanks, mirrors and the microwave oven can disrupt things so do your best to give the flashing black box some space.

As well as urging viewers to check their Wi-Fi, the MoneySavingExpert also issued an urgent price warning as millions face a huge hike this spring. In fact, due to the way that most Internet Service Providers (ISPs) work out their increases, some customers could face rises of over 14 percent this April.

Many companies hike bills by the rate of Consumer Price Index (CPI) inflation or Retail Price Index (RPI) inflation, plus another amount on top – that’s why this year’s hikes will be record-breaking.

It’s now vital that anyone out of contract finds a better deal and lowers their price. Although new contracts will still be hit by the rise, the lower your bill, the smaller the amount things will go up by.

There are plenty of deals on the market which can help reduce bills and it’s also worth ringing your current ISP to see if they can drop the price.

Before you make the call, do some research on the best deals and then haggle.

“I’d make sure you’ve seen what other providers are charging in your area, because it’s postcode dependent… and say I’m not willing to pay that amount, can you offer me a better deal?,” Lewis advised.

“If they say no… you say I want to go through to customer disconnections… this is where they can do the big deals.

“Always be polite and if they don’t give you that price, I would be pretty annoyed and I’d want to ditch and switch and go elsewhere.”