The drone doctor that can drop off your drugs: Robots flying at 90mph and up to 130ft in the air could soon be used to deliver life-saving medical supplies

Drones flying at up to 90mph could soon be delivering life-saving medical supplies within minutes.

Emergency operators will be trained to send out the machines loaded with EpiPens or defibrillators as soon as someone rings 999.

US firm Blueflite said its drones – which are being trialled – were aiming for ‘near instantaneous delivery’.

Flying at a height of about 130ft, the autonomous drones can navigate their way to anyone within a ten-mile radius. 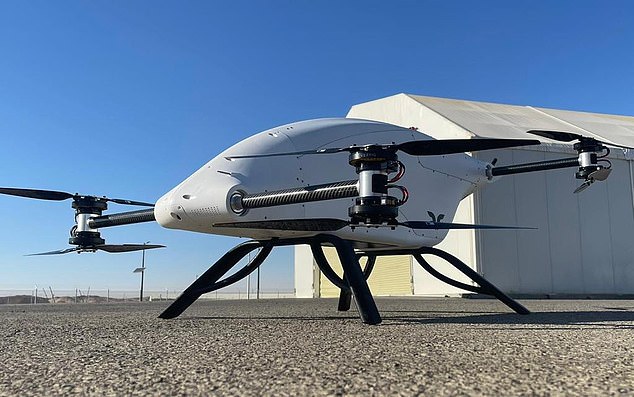 On arrival, they would hover and drop the equipment to the patient, who they would identify with a camera.

Blueflite announced at the Consumer Electronics Show in Las Vegas that it had signed a deal with Acadian Ambulance, one of the largest private medical transport companies in the US.

Chief technology officer James McClearen told the Daily Mail it was also finalising a deal with a company in Ireland and hoped to roll the drones out to the UK in the future.

The company said its drones and the platform they run on were the ‘first of their kind’ and they were still developing how the process will work.

Mr McClearen said: ‘We will train up a team of operators so that when someone calls requiring help, they can immediately check the flight path is clear and press the go button. Our target will be to get the supplies to the person in need within three minutes of them calling.

The firm has built two types of drones that will be sent out depending on the cargo – Slate, which can carry about 2lbs at up to 50mph; and Cobalt, which can travel at up to 90mph on a 20-mile round trip.

Mr McClearen said the drones were ‘not toys but industrial machines’ and would cost between £30,000 and £75,000, depending on how many were bought.

Blueflite chief executive Frank Noppel said: ‘Using drones to deliver critical medical equipment will shorten emergency response times considerably. And when every second counts, that can save lives and reduce costs in healthcare.’

He added: ‘Drones are becoming more and more mainstream, and there is increasing acceptance from society.

‘These are exciting times for us and the sector as a whole, and we believe that we are best positioned with our technology to enable drone operators through innovation.’