It is a spectacular natural phenomenon that puts on a multi-coloured light show across the Arctic Circle.

But tonight, lucky skywatchers in Britain might just have a chance of spotting the aurora borealis, as it creeps as far south as Edinburgh in Scotland.

The Earth has just reached its closest point to the sun this year – known as perihelion – but in doing so it is set to be slammed by a huge solar storm that will reach us today and tomorrow.

The Met Office’s Space Weather arm said a sunspot region in the southwestern quadrant of the sun had ‘led to a possible CME (coronal mass ejection)’. 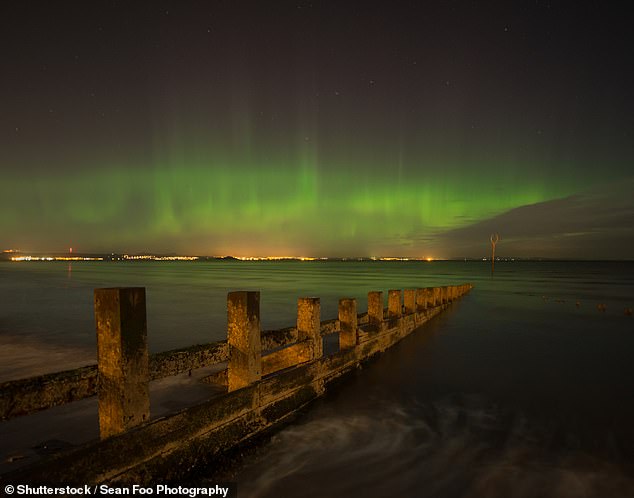 Look up! Tonight, lucky skywatchers in Britain might just have a chance of spotting the aurora borealis, as it creeps as far south as Edinburgh in Scotland 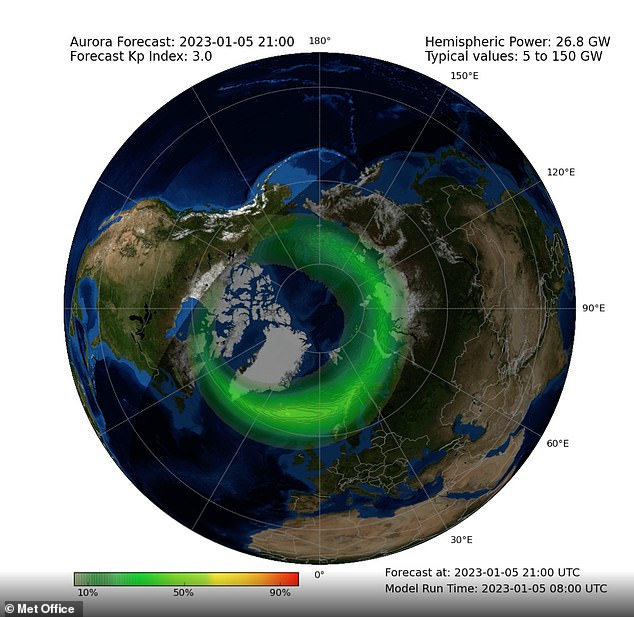 Coronal mass ejections (CMEs) are large clouds of plasma and magnetic field that erupt from the sun.

These clouds can erupt in any direction, and then continue on in that direction, plowing through solar wind.

These clouds only cause impacts to Earth when they’re aimed at Earth.

They tend to be much slower than solar flares, as they move a greater amount of matter.

CMEs can be triggered when a storm on the surface of the sun causes a whirlwind to form at the base of plasma loops that project from the surface.

These loops are called prominences and when they become unstable they can break, releasing the CME into space.

It added: ‘The auroral oval will likely extend southwards during the next 24 hours, initially owing to the ongoing influence of a coronal mass ejection (CME), but then one or more coronal hole high speed streams connecting with the Earth.

‘Both of these events are likely to lead to some enhancements to the auroral oval with overhead aurora possibly visible across Scotland and equivalent latitudes.’

The Northern Lights are predominantly seen in high-latitude regions, so any glimpse across the UK is a rare treat for stargazers.

But CMEs caused by intense solar activity can make it possible to spot the spectacle much further south.

The problem, however, will be cloud cover.

‘There is an area of low pressure that will be moving to the north of the UK that is going to bring cloud and some rain to the region,’ a Met Office spokesperson said.

‘There could be some clear spells overnight in Edinburgh at times but they won’t last particularly long.’

Sunspots are areas on the sun’s surface where powerful magnetic fields, created by the flow of electrical charges, become tangled and eventually release a huge explosion of energy that results in a solar flare.

Although our sun gives us life, it also frequently ‘sneezes’, ejecting billions of tonnes of hot plasma into space in colossal blobs of matter threaded with magnetic fields — in other words, CMEs.

CMEs usually take around 15 to 18 hours to reach Earth. 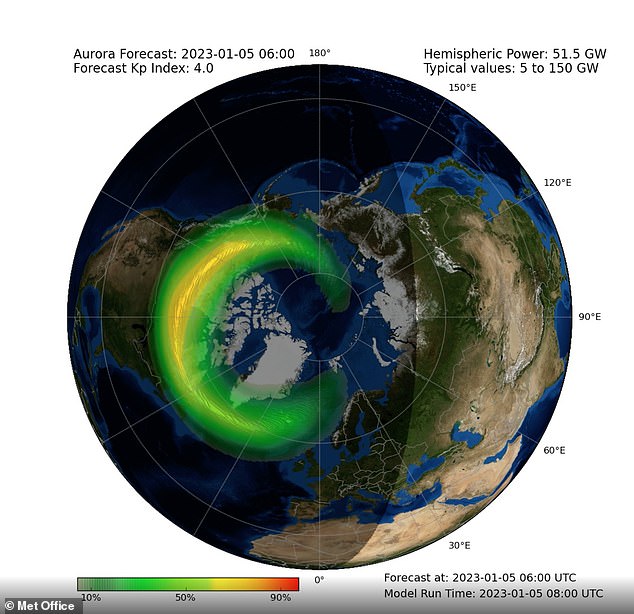 The Northern Lights are predominantly seen in high-latitude regions, so any glimpse across the UK is a rare treat for stargazers 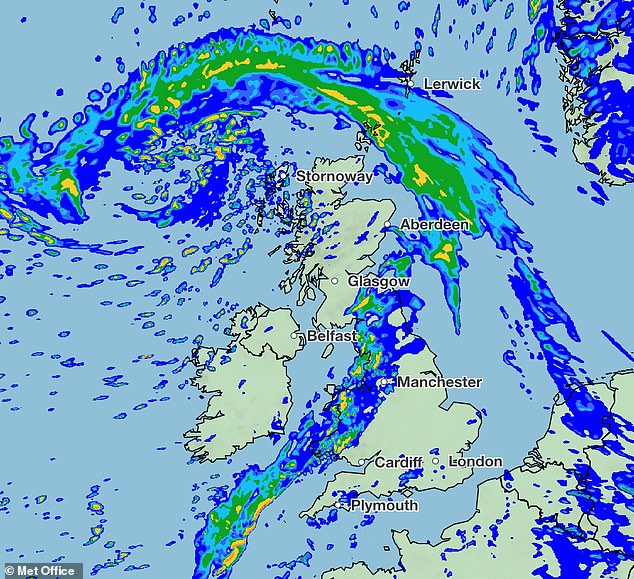 The problem with seeing it across Scotland tonight will be cloud cover. ‘There is an area of low pressure that will be moving to the north of the UK (pictured) that is going to bring cloud and some rain to the region,’ a Met Office spokesperson said

The Met Office said a possible one is expected to arrive today, with its effects set to continue into tomorrow (Friday).

The aurora appears when atoms in Earth’s high-altitude atmosphere collide with energetic charged particles from the sun, creating breathtaking colours of green with a hint of pink, red and violet.

It is more often seen in winter when the nights are cold, long and dark.

When a solar storm heads our way, some of the energy and small particles can travel down the magnetic field lines at the north and south poles into Earth’s atmosphere.

There, the particles interact with gases in our atmosphere resulting in beautiful displays of light in the sky — the aurora, or Northern Lights. Oxygen gives off green and red light, while nitrogen glows blue and purple.

The aurora can be seen near the poles of both the northern and southern hemispheres. In the north the display is known as the aurora borealis, and in the south it is called the aurora australis.

The Northern Lights have fascinated people on Earth for centuries, but the science behind them has not always been understood.

Our planet has an invisible forcefield, the magnetosphere, which protects us from dangerous charged particles from the sun.

The magnetosphere is the area around Earth controlled by the planet’s magnetic field.

Dr Marty Jopson, who studied Natural Sciences at Cambridge University, said: ‘Whilst it shelters us, it also creates one of the most impressive phenomena on Earth — the Northern Lights.

‘When the deadly solar winds meet Earth’s magnetosphere, some of the charged particles get trapped, and are propelled down the Earth’s magnetic field lines straight towards the poles.

‘And when they reach Earth, they strike atoms and molecules in our atmosphere, releasing energy in the form of light.’

From meteor showers and solar eclipses to the crescent moon beside Saturn and Venus: The astronomical events you don’t want to miss in 2023

In extra-terrestrial news, aliens could be discovered within 25 years when telescopes more powerful than James Webb are built to see distant solar systems