Walter Cunningham dies aged 90: US astronaut who was the last surviving member of NASA’s Apollo 7 mission passes away from natural causes after a ‘full and complete life’

Walter Cunningham, the US astronaut who was the last surviving member of NASA’s Apollo 7 mission, has died aged 90.

The Iowa native was lunar module pilot on the Apollo 7 mission in 1968, the first successful crewed flight of NASA’s Apollo programme.

Mr Cunningham was one of three astronauts aboard Apollo 7, an 11-day spaceflight that paved the way for the first moon landing less than a year later.

NASA confirmed his death but did not include its cause, although a family statement said he died in hospital ‘from complications of a fall, after a full and complete life’. 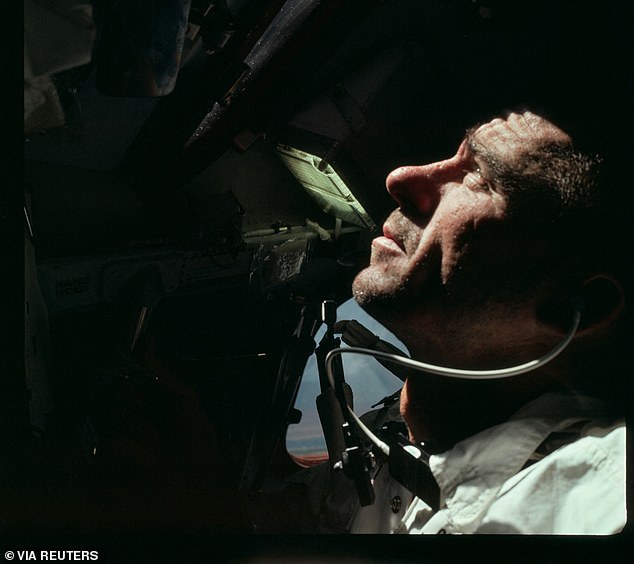 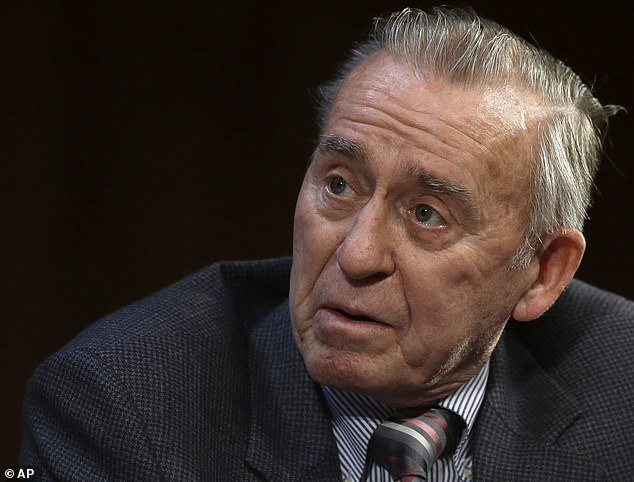 Mr Cunningham speaks on the campus of Massachusetts Institute of Technology in Cambridge, Massachusetts during a program ‘Celebrating 100 Years of MIT Aerospace’ in October 2014

Apollo 7 was the first test of the command and service module with a crew.

The crew orbited the Earth 163 times and spent 10 days and 20 hours in space.

The mission was a success, although all three astronauts developed severe head colds.

In a statement, NASA Administrator Bill Nelson paid tribute to Mr Cunningham, who was also a physicist and a fighter pilot with the US Marine Corps before being selected by NASA.

Apollo 7 was NASA’s first crewed space mission since the deaths of the three Apollo 1 astronauts in a launch pad fire January 27, 1967.

‘Walt Cunningham was a fighter pilot, physicist, and an entrepreneur – but, above all, he was an explorer,’ said Nelson.

‘On Apollo 7, the first launch of a crewed Apollo mission, Walt and his crewmates made history, paving the way for the Artemis Generation we see today.

‘NASA will always remember his contributions to our nation’s space program and sends our condolences to the Cunningham family.’

Ronnie Walter Cunningham was born in Creston, Iowa, on March 16, 1932 and joined the US Navy in 1951 after studying at Santa Monica College in California.

Following his active duty, which included flying 54 missions as a night fighter pilot in Korea, he resumed his studies at Santa Monica College and then transferred to the University of California, Los Angeles (UCLA) in 1958 where he studied physics.

He also worked as a scientist for the RAND Corporation, a US non-profit organisation, before his NASA selection in October 1963.

He crewed the Apollo 7 mission with Navy captain Walter Schirra (who died in May 2007) and Air Force major Donn Eisele (who died in December 1987). 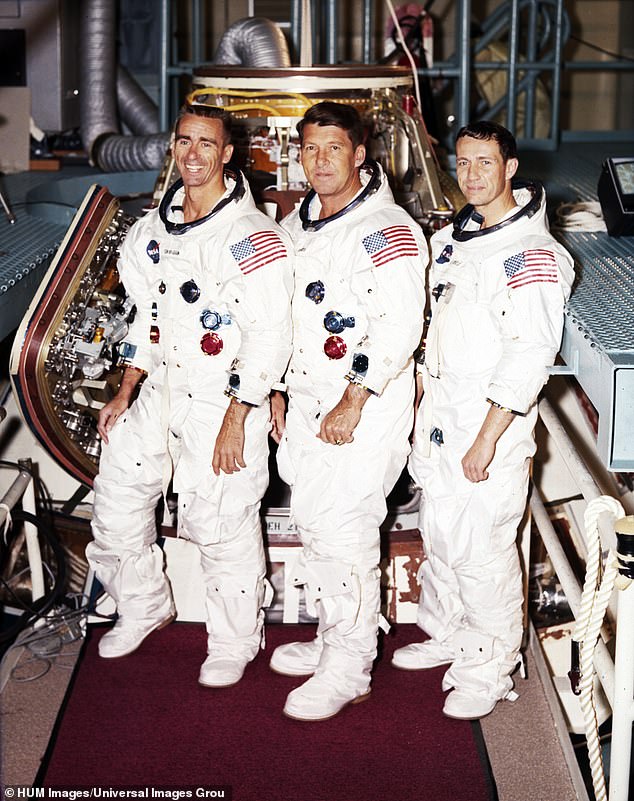 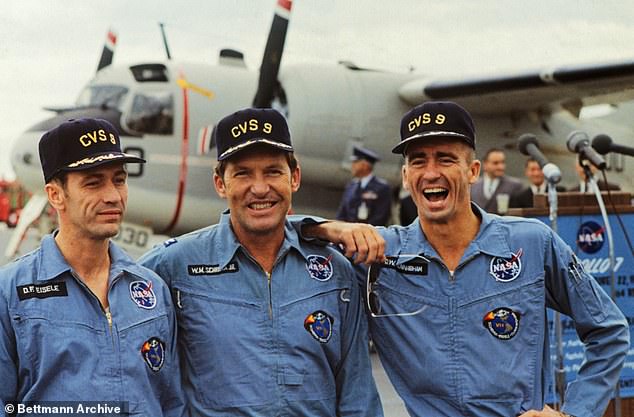 Pictured, the three astronauts of the Apollo 7 mission are all smiles following their successful splashdown and recovery on October 22, 1968. Left to right: R. Walter Cunningham, Walter Schirra and Donn Eisele 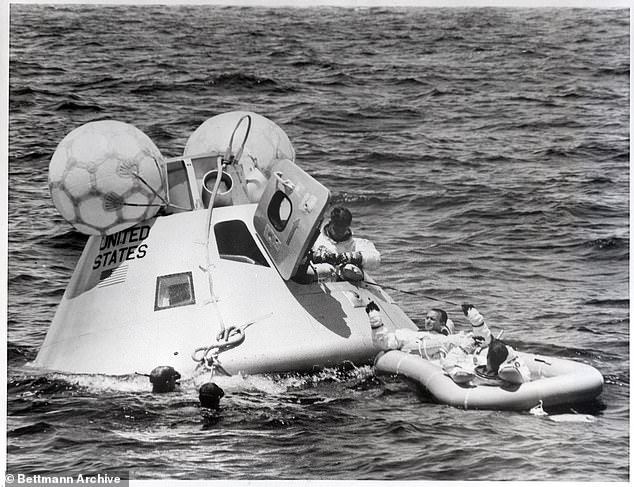 Frogmen help astronauts during egress training. Walter Cunningham and Donn Eisele are shown pulling Walter Schirra out of a space capsule onto a rubber raft 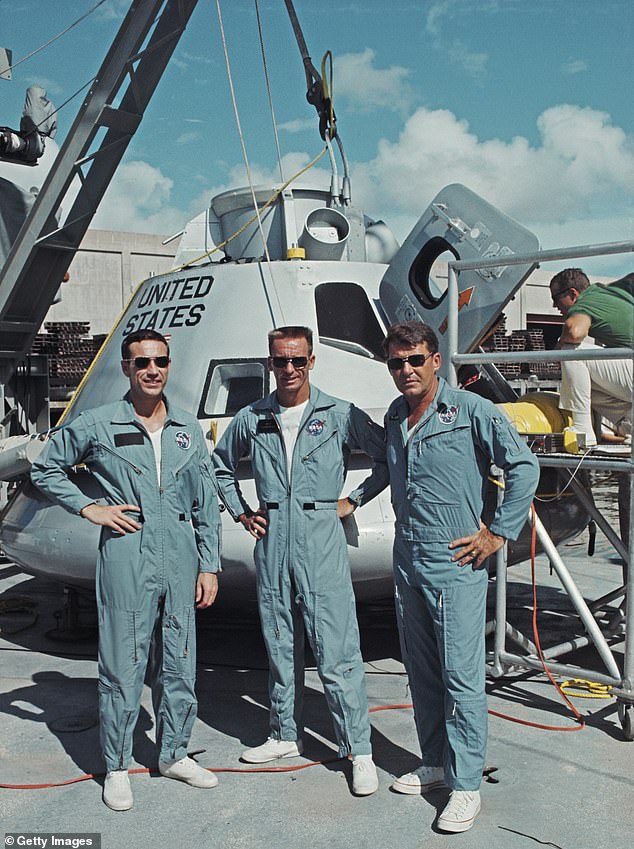 From left to right, Donn Fulton Eisele, Walter Cunningham and Walter Schirra on the deck of the ‘MV Retriever’ during training for water egress procedures from their capsule in the Gulf of Mexico, August 5, 1968

The mission launched from Cape Kennedy Air Force Station, Florida, on October 11 and splashed down in the Atlantic Ocean south of Bermuda on October 22.

The crew orbited the Earth 163 times and spent 10 days and 20 hours in space – a near perfect mission, NASA said.

Their spacecraft performed so well that the agency sent the next crew, Apollo 8, to orbit the moon as a prelude to the Apollo 11 moon landing in July 1969.

Apollo 7 astronauts also won a special Emmy award for their daily television reports from orbit, using a black-and-white television camera that was carried aboard. 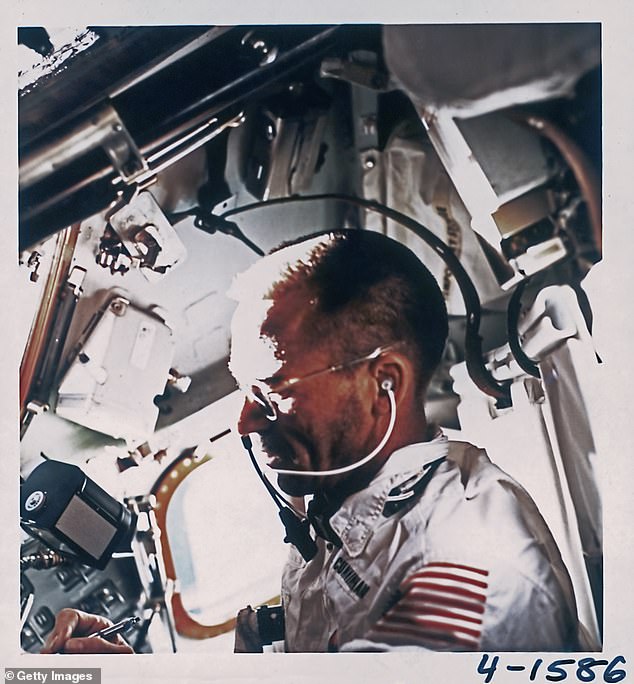 Walter Cunningham during the Apollo 7 mission, October 1968. The mission launched from Cape Kennedy Air Force Station, Florida, on October 11 and splashed down in the Atlantic Ocean south of Bermuda on October 22 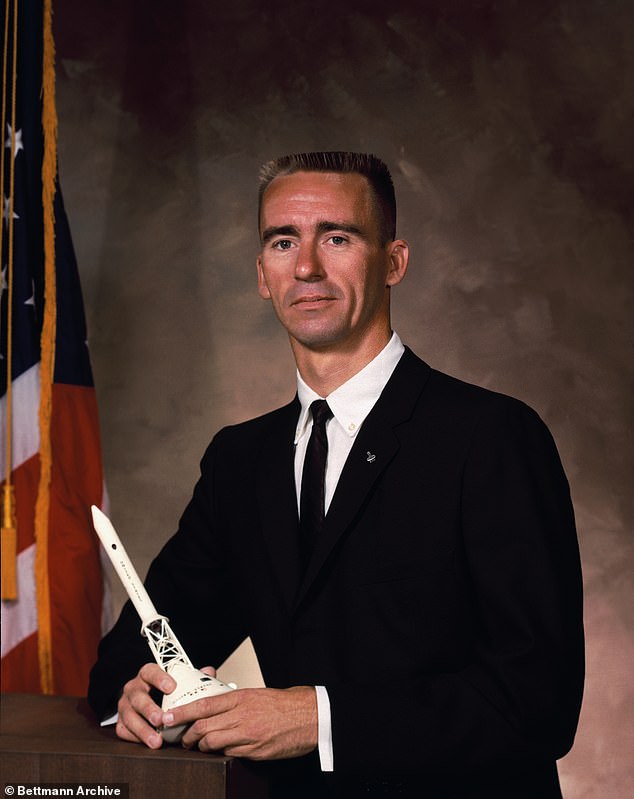 Portrait of Cunningham in 1964. Apollo 7 was NASA’s first crewed space mission since the deaths of the three Apollo 1 astronauts in a launch pad fire January 27, 1967

In an interview the year before his death, Mr Cunningham recalled growing up poor and dreaming of flying airplanes, not spacecraft.

‘We never even knew that there were astronauts when I was growing up,’ he told The Spokesman-Review.

After retiring from NASA in 1971, he worked in engineering, business and investing, and became a public speaker and radio host.

He wrote a memoir about his career and time as an astronaut, ‘The All-American Boys’, published in 1977.

He also expressed skepticism in his later years about human activity contributing to climate change, bucking the scientific consensus in writing and public talks, while acknowledging that he was not a climate scientist. 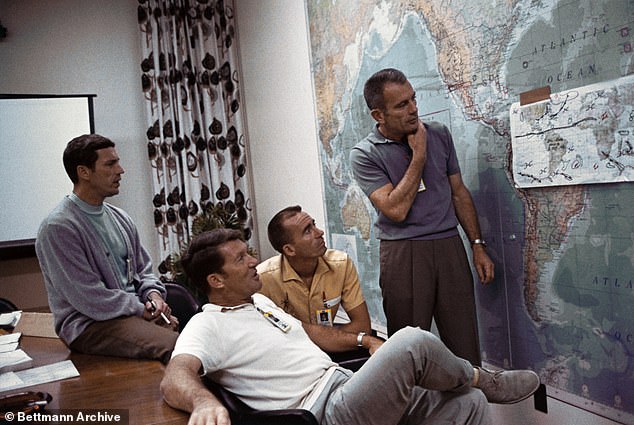 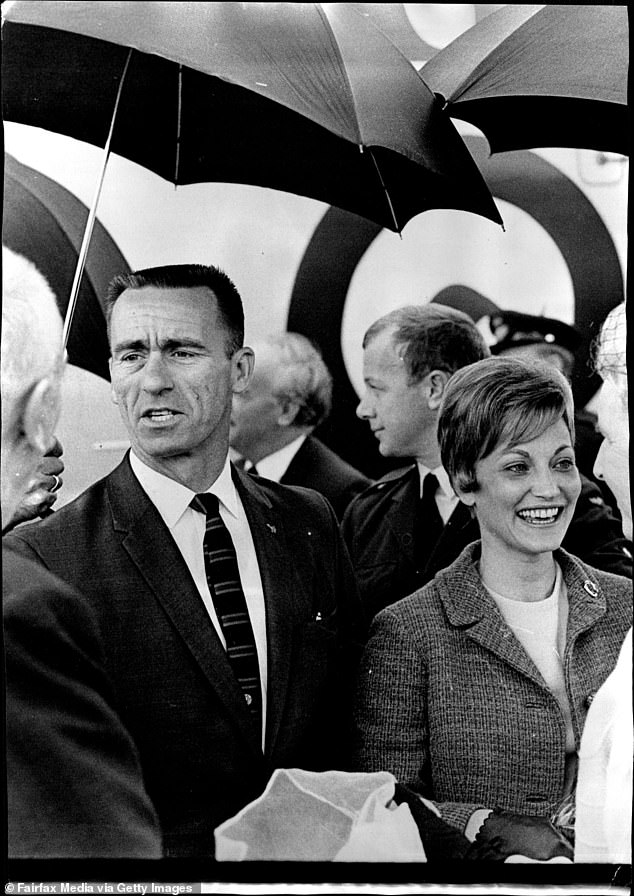 Cunningham arrives in Sydney with his wife, Loella, on May 6, 1969 – a couple of months before the success of Apollo 11 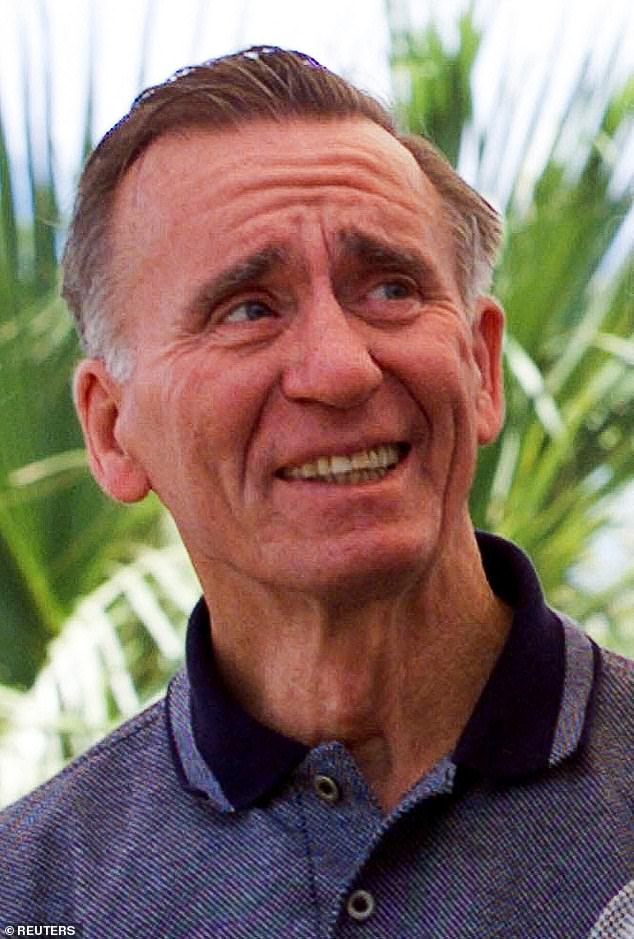 Here, Walter Cunningham attends a celebration of the Apollo 11 mission, which took humans to the moon for the first time, on the 30th anniversary of the flight, at the Kennedy Space Center in Cape Canaveral, Florida, July 17, 1999

Although Mr Cunningham never crewed another space mission after Apollo 7, he remained a proponent of space exploration.

‘I think that humans need to continue expanding and pushing out the levels at which they’re surviving in space,’ he said last year.

Mr Cunningham is survived by his wife Dot, his sister Cathy Cunningham, and his children Brian and Kimberly.

In a statement, the Cunningham family said: ‘We would like to express our immense pride in the life that he lived, and our deep gratitude for the man that he was – a patriot, an explorer, pilot, astronaut, husband, brother, and father.

‘The world has lost another true hero, and we will miss him dearly.’

He then completed a doctorate in physics with exception of thesis at the Advanced Management Program in the Harvard Graduate School of Business in 1974.

He joined the Navy in 1951 and served on active duty with the US Marine Corps, retiring with the rank of colonel. 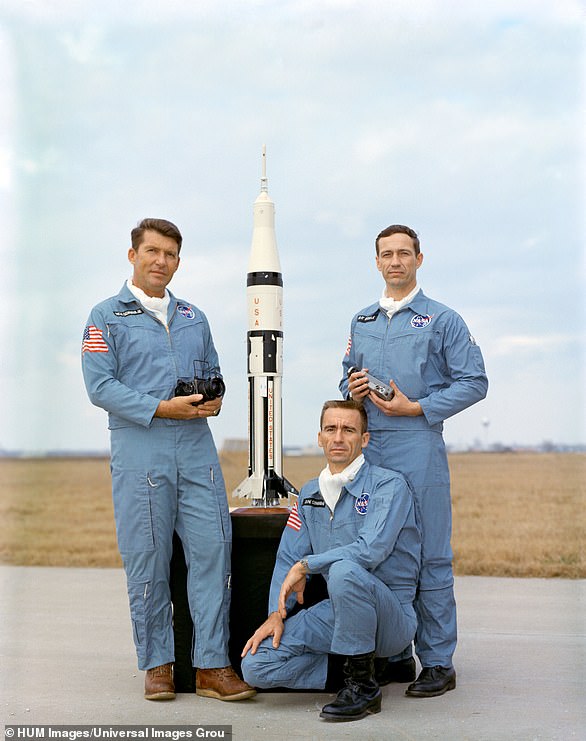 This is a portrait of the Apollo-Saturn 7 crew members. They are, left to right, astronauts Walter M. Schirra, commander; Walter Cunningham, lunar module pilot; and Donn F. Eisele

He flew 54 missions as a night fighter pilot in Korea.

He worked as a scientist for the Rand Corporation for three years. While with Rand, he worked on classified defense studies and problems related to the Earth’s magnetosphere.

Cunningham has accumulated more than 4,500 hours of flying time in 40 different aircraft, including more than 3,400 in jet aircraft.

Cunningham was selected as an astronaut in 1963 as part of NASA’s third astronaut class.

Prior to his assignment to the Apollo 7 crew, Cunningham was on the prime crew for Apollo 2 until it was cancelled and the backup lunar module pilot for Apollo 1. 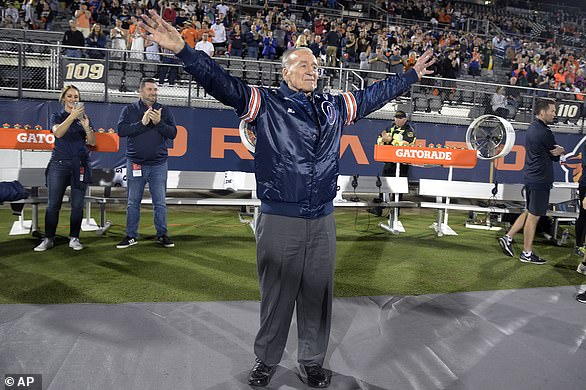 Walter Cunningham acknowledges the crowd before an Alliance of American Football game between the Orlando Apollos and the Atlanta Legend, Feb. 9, 2019, in Orlando

Cunningham was designated the lunar module pilot for the 11-day flight of Apollo 7, which launched on October 11, 1968 and was the first human flight test of the Apollo spacecraft.

With Walter Schirra and Donn Eisele, he tested maneuvers necessary for docking and lunar orbit rendezvous using the third stage of their Saturn IB launch vehicle.

The crew successfully completed eight tests, igniting the service module engine, measuring the accuracy of performance of all spacecraft systems, and providing the first live television transmission of onboard crew activities.

Cunningham’s last assignment at NASA Johnson was chief of the Skylab branch of the Flight Crew Directorate. 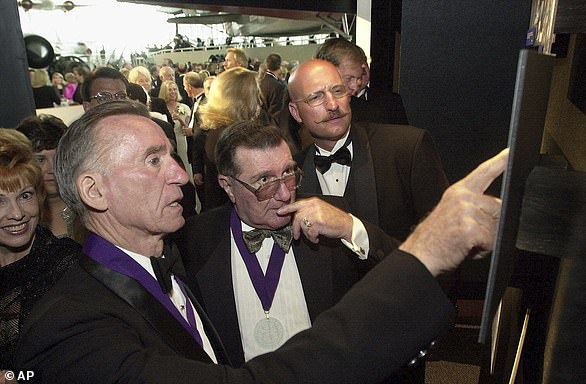 FILE – Apollo 7 astronaut Walter Cunningham, left, points to pictures of fellow astronaut the late Charles ‘Pete’ Conrad while speaking with Apollo 10 astronaut Dick Gordon, centre, and Andy Conrad, the son of Charles Conrad, at the opening of the Rendezvous in Space exhibit at the Museum of Flight in Seattle, Washington., July 22, 2000

In this capacity, he was responsible for the operational inputs for five major pieces of manned space hardware, two different launch vehicles and 56 major experiments that comprised the Skylab Program.

Cunningham retired from NASA in 1971 and would go on to lead multiple technical and financial organizations.

He also was a frequent keynote speaker and radio talk show host.

Cunningham and the Apollo 7 crew also earned an Emmy in the form of the National Academy of Television Arts and Sciences Special Trustee Award.