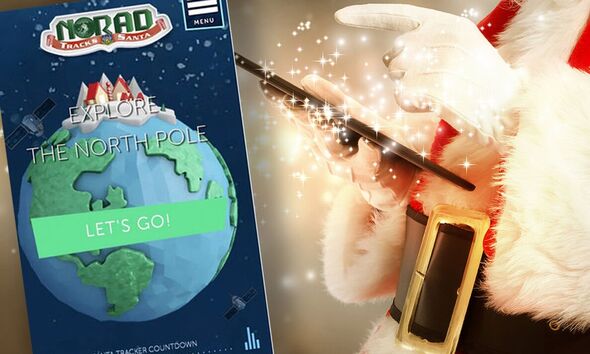 Santa has now officially started his long journey across the globe and there are some very simple ways to keep an eye on exactly where he is. Using the latest sleigh-tracking satellite technology, children can make sure they are tucked up in bed long before he arrives to deliver bags of presents. If you want to watch Santa and his team of reindeer make their trip around the planet here are some of the best apps for your smartphone and TV.

TRACK SANTA ON THE WEB

Google is back with more festive fun. The firm’s online Santa tracker not only shows you exactly where he is but also offers plenty of entertainment to stop the kids from getting bored whilst they wait. There are fun games such as Snowball Storm, Penguin Dash and Gift Slingshot plus you can get Santa ready for a selfie in the salon and create a festive band thanks to the Elf Jamband.

Other festive treats include Code Boogie which offers a way for children to learn some basic coding and there are ways to get creative using Santa’s Canvas.

The Google Santa tracker is totally free to use in all the most popular web browsers including Chrome and Safari.

You’ll find all the fun by tapping on the link below.

TRACK SANTA ON YOUR PHONE

To keep track of Santa you need some help from space. Luckily the very nice people at NORAD, (that’s the North American Aerospace Defence Command), hand over their state-of-the-art satellites to make sure millions can watch where the sleigh is heading next.

Incredibly, NORAD Tracks Santa has been in operation for over 60 years and is still one of the most popular ways of watching the reindeer whizz around the globe.

The tradition started back in 1955 when a local shop advertisement misprinted a phone number for children to dial should they want to reach Santa.

According to NORAD Director of Operations, Colonel Harry Shoup, received the first ‘Santa’ call and had his staff check radar data to see if there was any indication of Santa making his way south from the North Pole. Indeed there were signs of Santa, and children who called in were given an update on Santa’s position.

You can download the app on both Android and iPhone and, once installed, you’ll get a precise GPS location of his progress and how far away he is from your home.

TRACK SANTA ON YOUR TV

Anyone with Sky Q, Sky Glass or the Sky Stream box in their living can now see where Santa is on their TVs.

The satellite TV firm is back with a very simple way to keep a close watch on the journey.

All users have to do is grab their remote controls, tap the voice search button and say one of a number of phrases including “Where’s Santa?”; “Santa Tracker”; “Where’s Santa Tracker?”; “Where is Santa right now?”; “Follow Santa”; “Is Santa coming tonight?”

A full guide will then appear on the biggest screen in your home.