Women do more housework because they’re more likely to notice what needs to be done, study claims

When it comes to messy kitchen tops, unmade beds and dirty laundry, it can sometimes seem that men don’t notice a job needs doing.

Now scientists have an explanation for this cause of frustration for women up and down the country.

Experts from Cambridge University have suggested that men and women see different ‘possibilities for action’ while at home.

They said this view, called ‘affordance theory’, may offer an explanation as to why – in many cases – women take on more of the burden of housework and childcare. 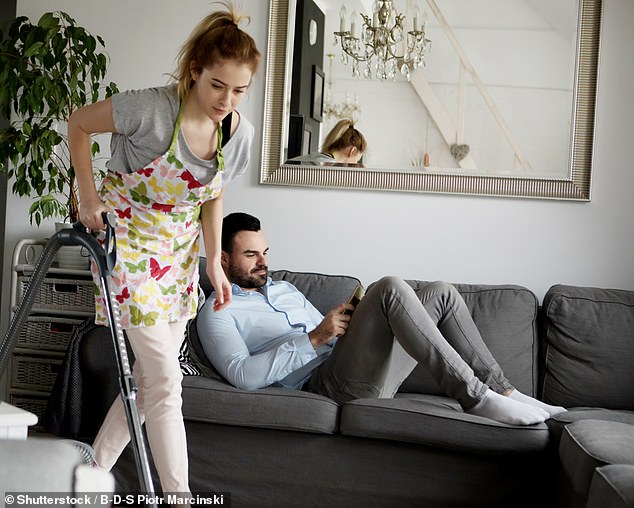 Women do more housework because they’re more likely to notice what needs to be done, philosophers say (stock image)

Working from home may unintentionally be forcing couples into a more ‘traditional’ lifestyle.

A new study of parents who do not regularly visit an office has shown that mums often end up doing more of the childcare, while the dads do less.

This is thought to be because the mothers use their flexible working arrangements to schedule in more of the household responsibilities.

However, the University of Essex and University of Kent researchers suggest that home-working fathers fear they may ‘lose their masculinity’ if they take on more routine tasks.

‘Jack, of course, sees that there are dishes in the sink, that the bananas are more brown than yellow, or that the refrigerator is empty.

‘But these perceptions do not ‘tug’ at him – they do not present the corresponding task as to be done.’

The team suggest women are more likely to see an action being ‘invited’ than men, possibly due to social conditioning.

Professor Paulina Sliwa explained that perceiving an affordance – or a ‘possibility for action’ – can trigger a neural process preparing you for physical action.

‘This can range from a slight urge to an overwhelming compulsion, but it often takes mental effort not to act on an affordance,’ she said.

‘Affordances can pull on your attention. Tasks may irritate the perceiver until done, or distract them from other plans.’

She said this puts women in a ‘catch-22’ situation, where there is either an imbalance in the amount of housework or childcare carried out, or an inequality between the amount of mental resources being used.

Dr Tom McClelland said: ‘Some skills are explicitly gendered, such as cleaning or grooming, and girls are expected to do more domestic chores than boys.

‘This trains their ways of seeing the domestic environment, to see a counter as ‘to be wiped’.’

The researchers said men should be encouraged to improve their sensitivity to noticing ‘possibilities for action’ at home.

‘A man might adopt a resolution to sweep for crumbs every time he waits for the kettle to boil, for example,’ Dr McClelland said. 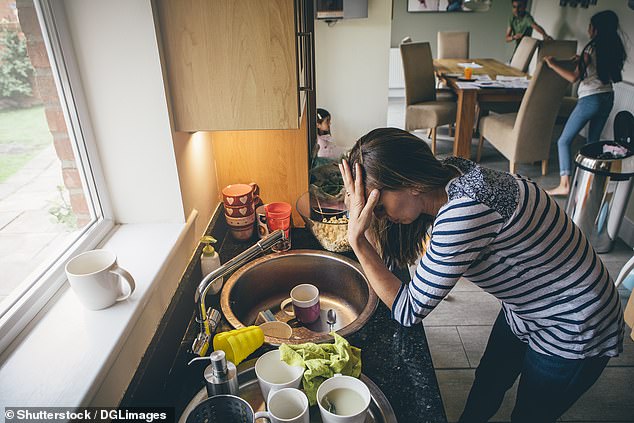 The team suggest women are more likely to see an action being ‘invited’ than men, possibly due to social conditioning (stock image)

‘Not only would this help them to do the tasks they don’t see, it would gradually retrain their perception so they start to see the affordance in the future.’

If you enjoyed this article:

Working from home leads to fathers doing LESS childcare and housework out of fear they may ‘lose their masculinity’, study finds

Women whose partners take on an equal share of housework have higher libidos, study shows

Dyson is secretly developing ROBOTS to carry out household chores

Whether it’s washing the dishes or doing the laundry, men are generally perceived to have a greater aversion to domestic chores than women.

But a new study suggests blokes can improve their sex life by taking more of a responsibility for the tasks that need doing around the home.

Researchers in Australia surveyed nearly 300 women in heterosexual relationships about their sex lives and who did the most household jobs.

The more equally chores were shared, the greater the women’s feelings of relationship satisfaction and, in turn, sexual desire.

The study authors say ‘sexual sparks fly’ when male partners take on a fair share of physical and mental loads.