California scientists announced a breakthrough that could commercialize nuclear fusion in a few decades, but a Vancouver-based company has a method that claims to power homes with the technology by the early 2030s.

The firm says it plans to have its first commercial power plant online by the early 2030s, but is targeting 2027 to demonstrate fusion on a power plant level. 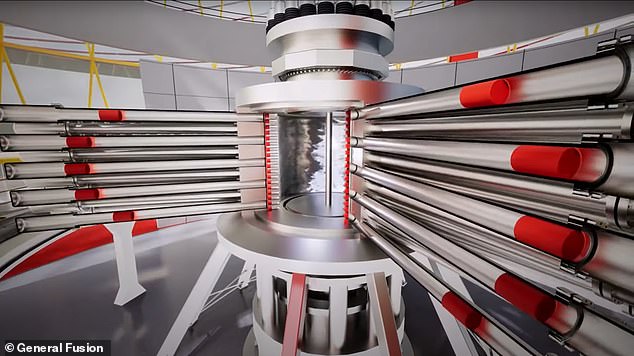 Scientists at the Lawrence Livermore National Laboratory’s National Ignition Facility (NIF) in California announced Monday that they had achieved ‘net energy gain’ by producing more energy in fusion than was used to activate it.

The experiment saw the high-energy lasers converge on a target about the size of a peppercorn, heating a capsule of hydrogen to more than 180 million degrees Fahrenheit and ‘briefly simulating the conditions of the sun,’ said the facility’s director, Dr Kim Budil.

‘I think it’s moving into the foreground — and probably with concerted effort and investment, a few decades of research on the underlying technologies could put us in a position to build a power plant,’ she added.

General Fusion, however, claims it will beat the scientists with its new method called Magnetized Target Fusion (MTF). 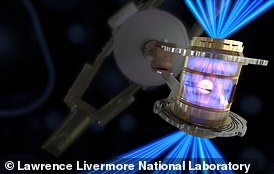 The US Department of Energy has announced an accomplishment in nuclear fusion that will go down in history – marking a decades-long quest to harness the same energy that powers the sun and stars.

MTF uses magnetic fields to slow down plasma losses and inertial compression to heat the plasma.

The unique process starts with injecting hydrogen plasma into a vessel lined with liquid metal.

Then, pistons are activated to compress the liquid metal around the plasma, squeezing and building pressure until the plasma reaches the optimal temperature for creating fusion.

Dr Michel Laberge, founder and Chief Science Officer for General Fusion, said in a statement: ‘In 2002, I founded General Fusion with the vision of creating a technology that would combat climate change and end the world’s reliance on fossil fuels for power.

‘To be successful, I knew I needed a practical method that overcame longstanding barriers to commercializing fusion. That’s why I chose Magnetized Target Fusion.

‘After 20 years – to see our core technologies proven out and ready to be put together in the fusion demonstration – it’s an incredible feeling.’

The firm claims to have the world’s largest and most powerful plasma injector, which allows it to generate plasma targets with confinement times exceeding predictions from accepted scaling laws and consistently achieves the conditions required for the company’s fusion demonstration.

Greg Twinney, CEO for General Fusion, said in a statement: ‘Commercializing fusion energy is within reach, and General Fusion is ready to deliver it to the grid by the 2030s. 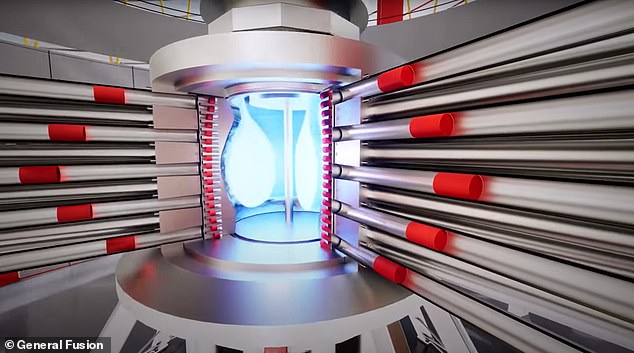 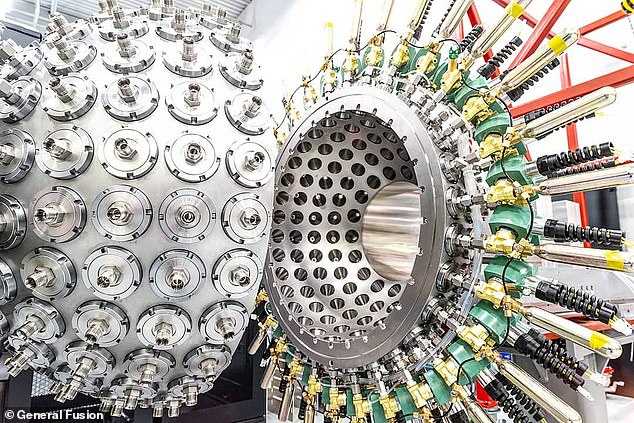 Nuclear fusion is the energy that powers Earth’s sun and all the stars in space – and has been the holy grail for scientists to achieve in a lab.

This is because nuclear fusion can rid the world of fossil fuels.

Nuclear fusion is the process by which two light atomic nuclei combine to form a single heavier one while releasing massive amounts of energy.

In the case of Earth’s sun and the stars in space, nuclei need to collide with each other at extremely high temperatures, more than ten million degrees Fahrenheit.

Once the nuclei come within a very close range of each other, the attractive nuclear force between them will outweigh the electrical repulsion and allow them to fuse.

For this to happen, the nuclei must be confined within a small space to increase the chances of collision. 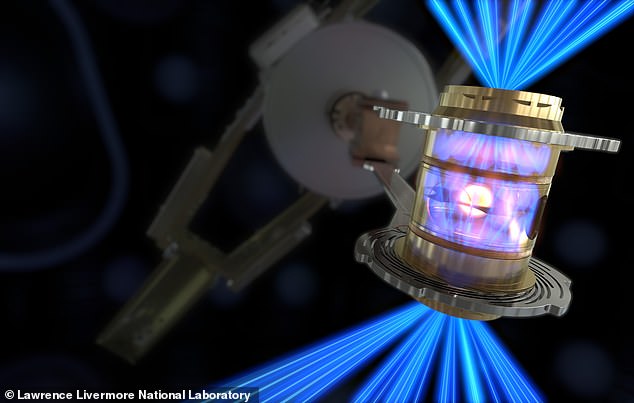 California scientists announced Monday that they had achieved ‘net energy gain’ by producing more energy in fusion than was used to activate it. This was done by zapping a small container of hydrogen with 192 lasers

The lasers used by the California scientists can create temperatures and pressures similar to those in the core of stars and giant planets and inside exploding nuclear weapons.

The team used 2.1 megajoules of energy to create the reaction conditions, replicating the sun’s power.

This resulted in an output of 3.15 megajoules – a gain of around 150 percent.

While Tuesday’s announcement is a step toward clean energy, the scientists are not blind to the work still ahead.

Budil said there are still ‘significant hurdles’ to overcome before the technology can be available commercially.