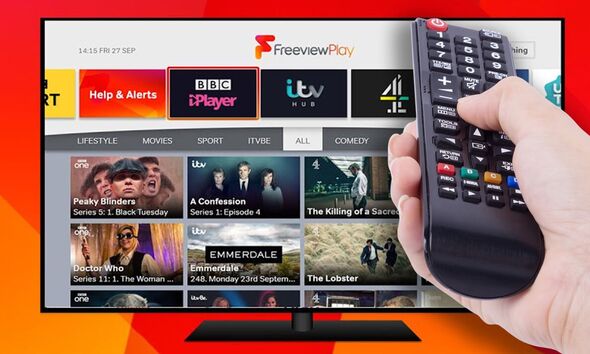 Homes that use Freeview for their nightly TV binge will now find thousands of hours of bonus content to watch thanks to a giant upgrade. The free-to-view service has just announced that its platform now offers a whopping 60,000 hours of shows, films and boxsets – that’s 20,000 more than at the start of the year. Of course, unlike services such as Sky or Netflix, Freeview has no expensive subscription plans or contracts to sign with users simply buying a compatible TV or set-top box to gain full access to content.

Thanks also to its online Freeview Play service, which launched in 2015, most shows can be watched on demand allowing users to binge whenever they like.

Freeview Play also continues to be updated and recently added the PBS America Player and the new ITVX service plus there’s now improved discovery features such as genre recommendations which make it easier to find the shows you want to watch.

With the cost of living crisis still gripping the nation, this big boost clearly can’t have come at a better time with Freeview revealing the news to celebrate turning 20.

“From 40,0000 hours of content in April 2022 to 60,000 hours today, Freeview Play’s offering just keeps getting stronger and stronger,” said Owen Jenkinson, Marketing Director at Freeview Play. “With more live channels, brand-new on-demand player PBS America, and the launch of ITVX, it’s been a great year for Freeview Play and we are so happy to be able to offer viewers so much fantastic content, completely free of charge”.

Along with dishing out more things to watch, there’s more good news with Freeview also offering some lucky customers the chance to bag a TV for free.

20 lucky Freeview users will get a giant television by simply following the official Instagram page – @freeviewtv – and guessing an iconic TV show from a short clip being shown on the social media network.

Those who working things out correctly will then be entered into the prize draw with one lucky person picked at random.

The gifts began on December 1, and will run until December 19 so there are plenty of chances of getting that shiny new gogglebox.

Anyone trying their luck on December 20 will also be in with the chance of bagging a gift worth £1,000 which includes that 50-inch telly plus some added goodies.

Key moments from Freeview over the past 20 years:

2002 • Freeview launches with 25 channels accessed via a set-top box.

2015 • Freeview Play launches, bringing the most popular free on demand services to millions of devices.