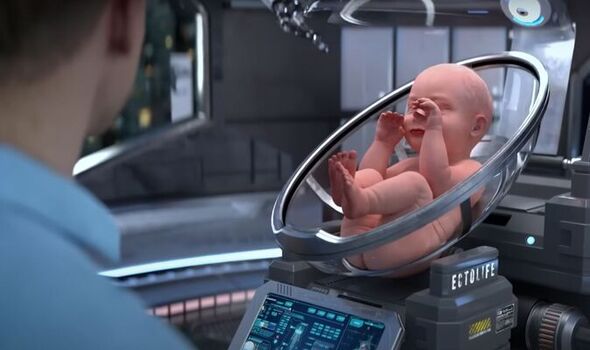 Hashem Al-Ghaili, a filmmaker and biotechnologist, has created a short video to start a conversation on how artificial wombs could be a “safe and pain-free alternative” for future generations to have children. The video shows the concept of an EctoLife Artificial Womb Facility, and claims such technology could be “reinventing evolution” by using pods to grow up to 30,000 babies a year.

The short film says the concept of an artificial womb-birthing pod is based on “50 years of groundbreaking scientific research conducted by researchers worldwide” and that the technology could be available to the public “just decades” from now.

The video shows viewers a tour of the facilities, which shows hundreds of babies in transparent pods as scientists check on the babies’ vitals.

It plays as if it is a real commercial for the Ectolife company advertising its services, and states: “Tired of waiting for a response from an adoption agency? Unable to find a suitable surrogate mother?

“Worried about pregnancy complications? Worry no more! Because EctoLife got you covered.”

Each facility is equipped with 75 labs, and each lab can “accommodate 400 growth pods or artificial wombs”, the film states.

The process would be by invitro fertilization and parents would simply press a button on the birthing pod at the end of the process to “easily remove” the baby from the growth pod.

The pods are meant to replicate a mother’s womb, but also include sensors that scan and monitor the baby’s well-being as it grows.

The fake company in the film offers a number of features, including speakers in the pod so parents can play music or even their own voice to the baby.

There is also a camera inside the pod to “improve the bonding experience” so parents can see in real-time how their child is doing.

The film claims such facilities would be the “perfect solution” to a number of issues such as infertility, miscarriage, and for women who have had their uteruses removed due to cancer or other complications.

It states artificial wombs would be “designed to help countries with severe population decline” and lists countries such as Japan, Bulgaria, and South Korea as examples.

The film also claims that parents who update to the “elite package” will be able to genetically engineer traits in their children, from choosing their hair colour to eliminating inherited diseases, to increasing their intelligence.

The majority of popular comments on the video, and other social media platforms praised the movie-making but seemed to be against the concept.

One commentator said they were “appalled” by the idea while another comment said it was “totally crazy” and another said it was “dystopian”.

A popular comment with over 400 likes on the video said: “Ah yes, man-made horror beyond my comprehension.”

On Instagram, someone else with almost 200 likes suggested: “How about we just make it easier for people to adopt the children that are always in and out of foster care instead of spending millions on this?”

Another user joked the idea was “how the matrix got started”.