Rapid grocery start-up Milkrun held talks with global transportation giant Uber about a strategic partnership in one of several moves it considered during a tumultuous year for loss-making delivery companies.

The closely watched outfit also had preliminary discussions with supermarket chain Coles and gig economy food delivery firm Deliveroo about potential ways to co-operate. Those talks did not result in any agreements, and Deliveroo pulled out of Australia last month. 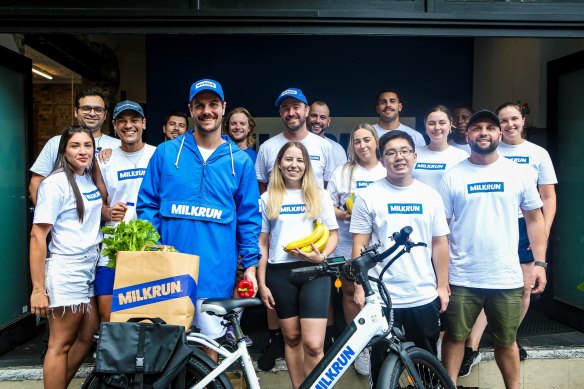 Milkrun founder Dany Milham (in blue jacket) faces having to run his business in tougher times.Credit:

Milkrun’s predicament has been a hot topic in Australia’s close-knit start-up scene, with widespread rumours swirling about a possible deal with Uber, the dominant player in food delivery. Multiple sources said the two companies held talks earlier this year, but cautioned that there is no guarantee that they will result in any formal agreements.

It is common for fledging firms to discuss partnerships or seek investment from larger rivals, and for larger firms to meet with smaller companies to better understand the market.

Company documents obtained by this masthead earlier this year showed Milkrun was bleeding cash, which it planned to stem by ditching ultrafast deliveries and reducing riders’ average hourly pay.

The food delivery sector has been hit by turmoil this year with investors increasingly unwilling to fund loss-making businesses as the economy sours. In recent months two of Milkrun’s rivals, Voly and Send, both ran out of money and ceased operating.

This masthead can also reveal that DoorDash, the US-based gig economy giant that launched a Milkrun competitor in Australia called DashMart last month, laid off some of the employees who worked on the initiative as part of a round of global job cuts.

“The positions do not affect any single team,” a DoorDash spokeswoman said. “While some of the affected employees are based in Australia, this does not affect our presence or commitment to DashMart in Australia overall.” 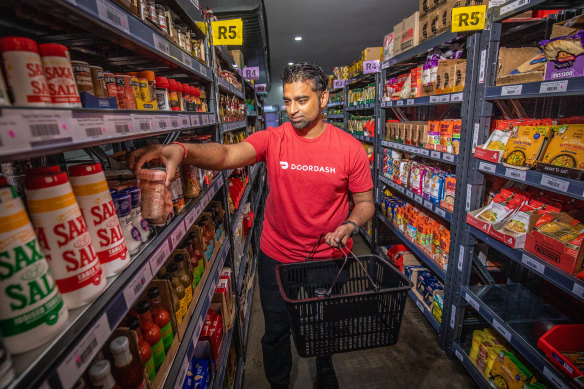 A worker at a DashMart store. Frontline staff were not affected by the layoffs.Credit:Scott McNaughton / The Age

Several industry sources said Milkrun had briefly held talks with Deliveroo and Coles about ways to potentially collaborate, including by getting Milkrun’s products on Deliveroo’s app. But its discussions with Uber were more substantial, the sources said.

In a wide-ranging interview in October, Uber’s global chief executive Dara Khosrowshahi was sceptical about the prospects of firms like Milkrun, which had sprung up on several continents only to flounder.

Uber already has a presence in the grocery delivery market via a partnership with Woolworths called Metro60.

But the company has used the Australian market as a breeding ground for global product initiatives. Earlier this year it acquired Australian start-up Car Next Door, which is now forming the backbone of an international expansion into vehicle sharing.

Milkrun is the best-funded local delivery start-up, and raised $75 million from a host of prominent backers in January. It used the money to build a network of mini-warehouses in Sydney and Melbourne, enter new product areas such as alcohol, and create a confident, irreverent brand in a distinct shade of blue.

Filings with the Australian Securities and Investments Commission indicate Milkrun has not raised any fresh equity since then.

Milkrun chief executive Dany Milham did not respond to requests for comment. In June Milham said the company was in a “comfortable” financial position, growing rapidly, and predicted some of its stores would soon be profitable.

Milkrun’s total headcount, according to figures from the professional social network LinkedIn, which relies on users to update their employment status and is therefore useful as a guide only, is down 6 per cent in the last six months. But Milkrun is still advertising for a handful of open roles.

Uber and Coles declined to comment. Deliveroo no longer has Australian spokespeople.

The Market Recap newsletter is a wrap of the day’s trading. Get it each weekday afternoon.