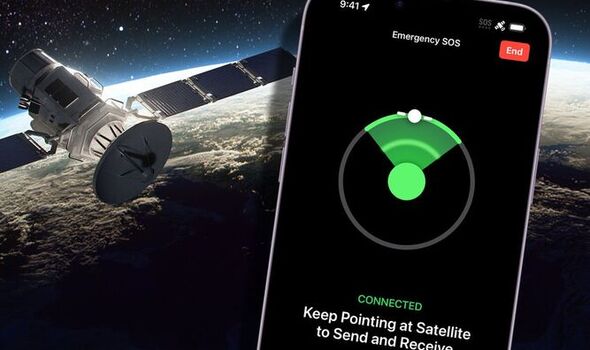 Anyone who has just treated themselves to an iPhone 14 or iPhone 14 Pro will now be able to try out a space-aged upgrade. When these latest call makers were revealed back in September, Apple promised that they would be able to connect to satellites that spin around the globe allowing owners to send emergency text messages even if there’s no network signal.

Now that life-saving upgrade is finally being switched on in the UK today so no matter where you are there will always be a connection. Express.co.uk has been lucky enough to give this feature a try ahead of its official launch and it’s not only seriously impressive but also ludicrously easy to use.

Once the iPhone loses its usual cellular connection, users will automatically see a satellite symbol appear on the top right of the display.

Should they then suddenly find themselves in need of help, the option to send an Emergency Text via Satellite will pop up on the screen.

For a message to be sent, the device has to be pointing right at a satellite but Apple has made finding them simple with users getting a radar-style icon on the screen that helps pinpoint a precious location. It’s almost like little like a fun game, with users needing to get the satellite icon to sit within a glowing green triangle on the display.

Considering these satellites are hundreds of miles above the globe this quick connection is mightily impressive with the whole process taking a matter of seconds.

Once linked, a short questionnaire then appears to help the user answer vital questions – such as what’s wrong and if anyone is injured – with a few simple taps.

This is instantly transmitted to a team of specialists who can gather details including location, medical data, altitude and even how much power is left in the iPhone. This data is then passed on to the correct emergency services to provide the necessary assistance. After the initial message is sent, users can continue to post updates via additional satellite texts.

Despite the distance they have to travel, during our tests, messages were all sent and received in a matter of seconds.

Along with this update being useful when an incident happens, those who regularly go off the beaten track will also now be able to send quick location data, via the Find My app, so friends and family know they are safe.

Once live, you simply head to Settings, then tap Emergency SOS and scroll down until you see the option to Try Demo. You’ll then be offered a step-by-step guide to help you get to grips with finding satellites and sending messages via them

“Emergency SOS via satellite will improve the situation for people who are in trouble and outside of cellular and Wi-Fi coverage, allowing them to reach emergency services and get help in emergency situations,” said Jan Tino Demel, the Expert Group for Control Center Technology and Emergency Calls Committee’s chairman. “The function can be used immediately without any adjustments to existing systems. With highly qualified, multilingual emergency specialists, Apple facilitates the transfer of emergency calls to the responsible rescue or police control centre. Without a doubt, this can save lives.”

Apple says the service will be free to use for the first two years with those wanting the feature after that period then being charged a fee.

There’s no word on how much it will cost but expect more details to emerge on pricing next year.

Along with the UK, the upgrade is also now available in Ireland, France and Germany.