‘A remarkable point in human history’: Experts say nuclear fusion could pave the way for UNLIMITED clean energy – as California scientists use the world’s biggest laser to replicate the reaction that powers the sun

It could help tackle climate change, speed up a trip to Mars, and relinquish Vladimir Putin’s vice-like energy grip on the West.

In short, nuclear fusion would change the world.

And that’s why scientists across the globe are rejoicing at news coming out of the US that the ‘holy grail’ of unlimited clean power is within touching distance.

For the first time ever, researchers are believed to have gained more energy out of a controlled nuclear fusion reaction than they put in. 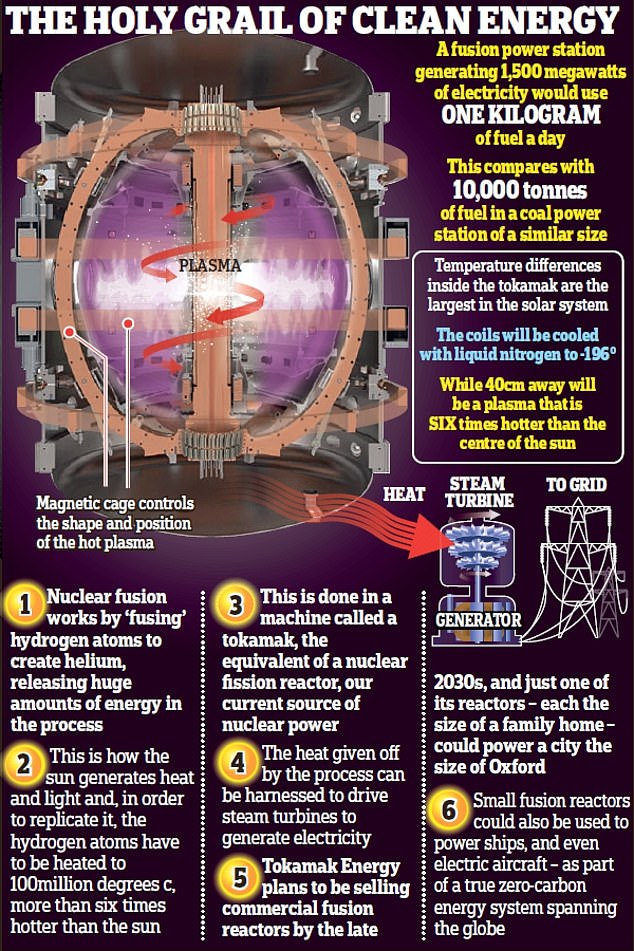 Excitement: Scientists across the globe are rejoicing at news coming out of the US that the ‘holy grail’ of unlimited clean power is within touching distance. For the first time ever, experts are believed to have gained more energy out of a controlled nuclear fusion reaction than they put in. Pictured is how a reactor works, based on one developed by UK firm Tokamak Energy 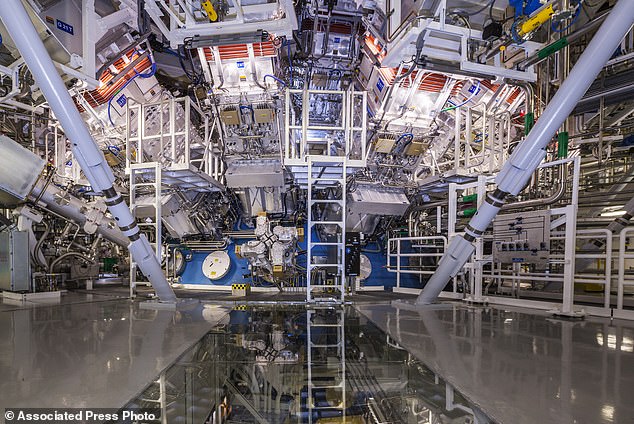 Scientists at the Lawrence Livermore National Laboratory in California (pictured) used 2.1 megajoules of energy to create the conditions for the reaction, which replicates the reaction that powers the sun sun, and from that they received 2.5 megajoules

Nuclear fusion is being looked to as a potentially limitless source of clean energy, created by the same core processes inside the sun.

Using intense heat, magnetic fields and pressure, the nuclei of lighter elements are fused together to create heavier elements, releasing energy in the process.

By containing this star-like process in specially designed reactors, engineers can fuse hydrogen atoms together to produce helium, harnessing the clean energy produced and potentially cutting dependency on fossil fuels.

In order for the reaction to take place, the super-heated gas – in a plasma state – is subjected to pressure, which essentially squeezes the atoms together and forced them to react.

According to the Financial Times, scientists in California used 2.1 megajoules of energy to create the conditions for the reaction, which replicates how the sun is powered, and from that they received 2.5 megajoules.

The laboratory behind the monumental milestone is yet to confirm its shock findings but the US government has teased a ‘major scientific breakthrough’ and called a press conference for tomorrow (Tuesday).

It has sparked huge excitement within the scientific community as experts eagerly await further details from the Lawrence Livermore National Laboratory in California.

One scientist described it as a ‘phenomenal breakthrough’ that has come ‘just when the planet needs it’, while another ‘heralded it as a remarkable point in human history’.

‘If confirmed, this result is a watershed moment for inertial fusion as a power generation technology,’ he told MailOnline.

However, Mr Hawker warned that despite the excitement over the potential of limitless clean energy, it ‘would not be a silver bullet for climate change’.

‘For the energy sector, there will not be an immediate impact, and it is important that deployment of renewables must continue,’ he added.

‘We need clean baseload power and this is what fusion can offer. It does not have the drawbacks of nuclear, no high-level or long-lived waste, no weapons grade material, no meltdown risk.’

Dr Mark Wenman, of Imperial College London, said: ‘So far despite 70 years of research no one has got more energy out of a fusion reaction than they have needed to put in. The record was around 70 per cent (i.e. a net loss of energy).

‘This new announcement by Lawrence Livermore, if proven to be true, therefore sets a remarkable point in human history, which in future could usher in an era of green, secure and essentially inexhaustible form of compact energy, without long-lived nuclear waste.

‘Of course this announcement is likely to be of more scientific significance than a practical one, but as a proof of concept should help more funding flow into nuclear fusion research bringing the time when we can connect a fusion plant to the grid that bit closer.’

Arthur Turrell, from the Department of Physics at Imperial College London, said: ‘This phenomenal breakthrough brings us tantalisingly close to a demonstration of “net energy gain” from fusion reactions — just when the planet needs it.

‘The team at the National Ignition Facility, and their partners around the world, deserve every plaudit for overcoming some of the most fearsome scientific and engineering challenges that humanity has ever taken on.

‘The extraordinary energy release achieved will embolden nuclear fusion efforts the world over, lending momentum to a trend that was already well under way.’

He wrote on Twitter: ‘This experimental result will electrify efforts to eventually power the planet with nuclear fusion — at a time when we’ve never needed a plentiful source of carbon-free energy more!’

The Lawrence Livermore National Laboratory confirmed that a successful experiment had recently taken place at its National Ignition Facility but said analysis of the results was ongoing.

Although it is far from being a commercial reactor, the development is still considered an important step for the field.

Professor Steven Rose, of Imperial College London, said: ‘This is the most significant advance in inertial fusion since its beginning in 1972.

‘What has been achieved has completely altered the fusion landscape and we can now look forward to using ignited plasmas for both scientific discovery and energy production.’ 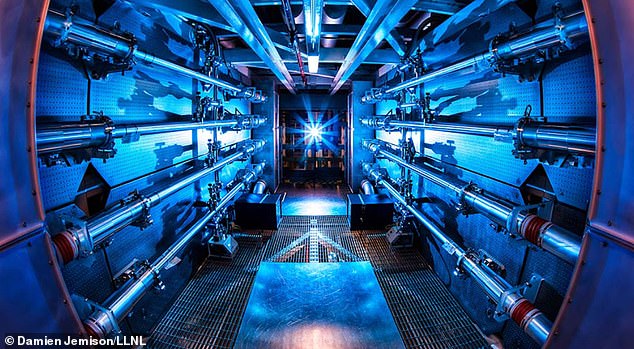 His colleague, Dr Brian Appelbe, added: ‘We have entered a regime we’ve previously never been in — this is uncharted territory in our understanding of plasma.’

Oliver Cameron, an executive at self-driving car company Cruise, was enthused by the idea of nuclear fusion energy and, following the huge excitement and popularity of newly-released chatbot ChatGPT, developments in artificial general intelligence (AGI).

‘It is becoming increasingly likely that we end this decade with both AGI and viable nuclear fusion,’ he tweeted.

Dr Aidan Crilly, Research Associate in the Centre for Inertial Fusion Studies at Imperial College London, was excited about what the achievement might mean for our understanding of the universe.

‘Reproducing the conditions at the centre of the sun will allow us to study states of matter we’ve never been able to create in the lab before, including those found in stars and supernovae,’ he said.

‘We could also gain insights into quantum states of matter and even conditions closer and closer to the beginning of the Big Bang — the hotter we get, the closer we get to the very first state of the Universe.’

Nuclear fusion power works by colliding heavy hydrogen atoms to form helium, releasing vast amounts of energy, mimicking the process that occurs naturally in the centre of stars like our sun, which burns at roughly 27million°F (15million°C).

Similar tests have been performed before, but the Livermore one is the first to generate more energy than was used to create the experiment — meaning scientists could theoretically harness nuclear fusion as an energy source. 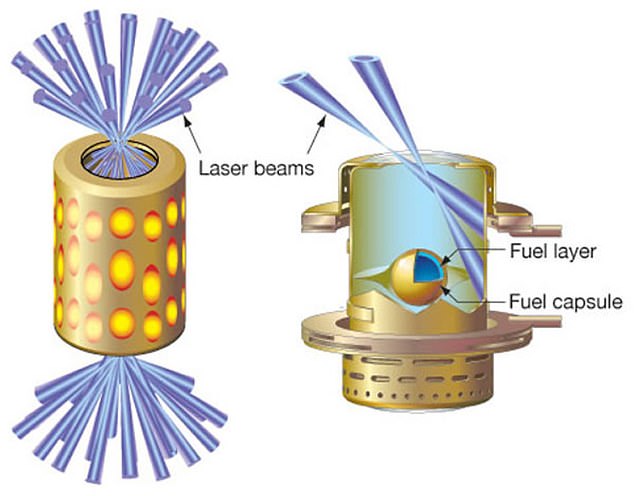 All of the energy of NIF’s 192 beams is directed inside a gold cylinder called a hohlraum, which is about the size of a dime. A tiny capsule inside the hohlraum contains atoms of deuterium (hydrogen with one neutron) and tritium (hydrogen with two neutrons) that fuel the ignition process

Using the world’s largest laser, consisting of 192 beams and temperatures more than three times hotter than the centre of the sun, the researchers coaxed fusion fuel for the first time to heat itself beyond the heat they zapped into it — achieving a net energy gain.

It could represent a groundbreaking moment in humankind’s move away from fossil fuels like oil and coal to completely clean energy sources that do not pollute the air, or scar landscapes with mining or pipelines.

The ultimate goal, still years away, is to generate power the way the sun generates heat, by pushing hydrogen atoms so close to each other that they combine into helium, which releases torrents of energy.

A single cupful of that substance could power an average-sized house for hundreds of years, with no carbon emissions.

That is why in a world with an ever-increasing demand for electricity and a deteriorating environment, fusion is considered the holy grail of energy.

It merges atomic nuclei to create massive amounts of energy — the opposite of the fission process used in atomic weapons and nuclear power plants, which splits them into fragments.

Unlike fission, fusion carries less risk of accidents or the theft of atomic material.

But achieving fusion has been seen as both extremely difficult and prohibitively expensive.

The majority of scientists believe fusion power stations are still decades away — but the technology’s potential is hard to ignore.

The $3.5billion (£2.8billion) National Ignition Facility was initially built with the intention of testing nuclear weapons by simulating explosions but its focus has now shifted to the advance of fusion energy research.

Researchers around the world have been working on the technology for decades, trying different approaches.

Thirty-five countries are collaborating on a project in Southern France called the International Thermonuclear Experimental Reactor that uses enormous magnets to control the superheated plasma. That is expected to begin operating in 2026.

Earlier experiments in the United States and United Kingdom succeeded in fusing atoms, but achieved no self-heating.

HOW A FUSION REACTOR WORKS

Fusion is the process by which a gas is heated up and separated into its constituent ions and electrons.

For fusion to occur, hydrogen atoms are placed under high heat and pressure until they fuse together.

The tokamak (artist’s impression) is the most developed magnetic confinement system and is the basis for the design of many modern fusion reactors. The purple at the center of the diagram shows the plasma inside

When deuterium and tritium nuclei – which can be found in hydrogen – fuse, they form a helium nucleus, a neutron and a lot of energy.

This is done by heating the fuel to temperatures in excess of 150 million°C and forming a hot plasma, a gaseous soup of subatomic particles.

Strong magnetic fields are used to keep the plasma away from the reactor’s walls, so that it doesn’t cool down and lose its energy potential.

These fields are produced by superconducting coils surrounding the vessel and by an electrical current driven through the plasma.

For energy production, plasma has to be confined for a sufficiently long period for fusion to occur.

When ions get hot enough, they can overcome their mutual repulsion and collide, fusing together.

When this happens, they release around one million times more energy than a chemical reaction and three to four times more than a conventional nuclear fission reactor.