Ireland is the real home of BEER! Scientists discover the elusive ancestor of yeast used for lager in a forest in Dublin

Scientists have discovered the ancestor of the yeast species necessary for the production of lager beer – in Ireland.

Saccharomyces eubayanus is a little-known species of yeast that gave birth to the yeast used today to brew lager, Saccharomyces pastorianus.

S. eubayanus was first found in the Patagonian Andes back in 2011, but experts have found it for the first time in the European wild, in Dublin woodland. 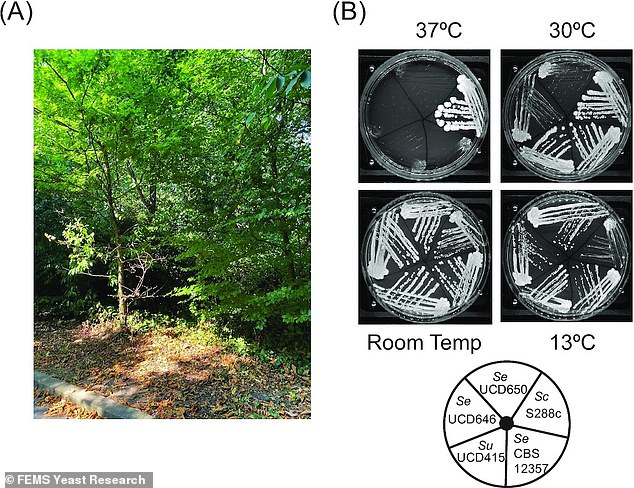 A species of yeast called S. eubayanus was first found in the Patagonian Andes back in 2011, but Irish experts have found it for the first time in the European wild, in Dublin woodland (left). The species (B) grows poorly at temperatures of 86°F (30°C) or higher and grow well at cooler temperatures (e.g. 55°F or 13°C), unlike ale yeast S. cerevisiae

All beers, by definition, are either an ale or a lager, depending on what type of yeast they use.

Lager is the most widely consumed and commercially available style of beer, and generally tend to be light-gold in colour (although jet black lagers do exist).

Ales, meanwhile, include styles like stouts (including the world-famous Guinness), bitters and barely wines.

Today, more than 90 per cent of beer produced worldwide is lager, not ale.

The new study was led by researchers at the School of Biomolecular and Biomedical Science at University College Dublin’s Conway Institute.

‘We’re hoping to find a commercial partner to brew with it so we can find out what it tastes like.’

All beers, by definition, are either an ale or a lager, depending on what type of yeast they use.

Until the Middle Ages, most beer brewing was associated with an ale yeast called Saccharomyces cerevisiae.

This is the same species of yeast that is still used today to make ale, as well as wine, whiskey, bread and more.

Lager brewing first emerged in the 13th century in Bavaria in southern Germany but became particularly common a couple of centuries later.

Because of this, brewers switched to using S. pastorianus because it could withstand colder temperatures – and the popularity of lager started to climb. 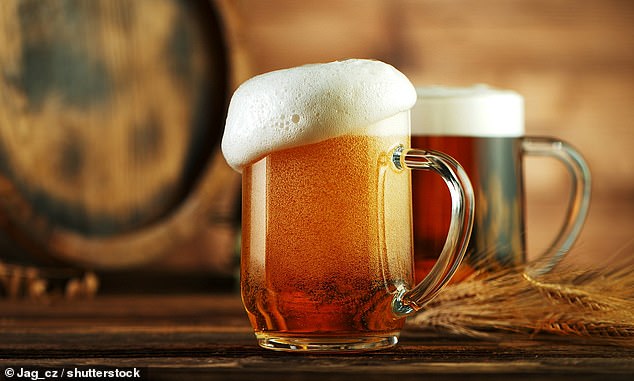 Around 90 per cent of beer made today is lager, not ale, and there is considerable interest in understanding the historical shift from ale to lager in Europe. Lagers on the market generally tend to be light-gold in colour (although jet black lagers do exist)

It’s already known that S. pastorianus is actually a hybrid of two parent yeasts, one of which is the older ale yeast S. cerevisiae.

Until 2011, the other parent yeast was debated, but that year another cold-tolerant species called S. eubayanus was discovered in Patagonia.

At the time, analysis revealed S. eubayanus was 99 per cent genetically identical to S. pastorianus – providing evidence that it’s the other of the two parents.

It was part of an undergraduate project to identify wild yeasts and sequence their genomes, although they weren’t looking specifically for S. eubayanus.

The samples came from soil on two sites on the campus, about 55 feet (17 metres) apart, collected in September 2021.

One soil sample was taken from under leaf litter from a sycamore tree, while the other was isolated from an area with oak, beech, and cherry laurel trees. 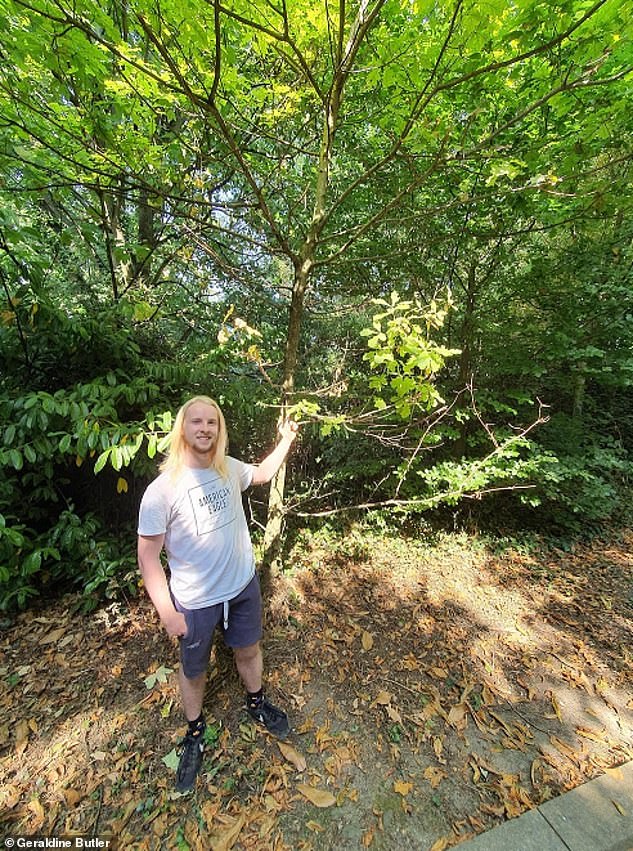 One soil sample was isolated from an area with oak, beech, and cherry laurel trees. Pictured, study author Stephen Allen stands in front of an oak tree at the location

Beer and brewing: A brief history

Brewing is one of the oldest human industries. It is believed the primitive cultures of Mesopotania could have been brewing malted barley scraps as far back as 10,000BC but there are no records of it.

The earliest proof of beer-drinking dates back to Northern China 9,000 years ago.

This ancient brew was made using hawthorn fruit, Chinese wild grapes, rice and honey, and is the oldest known fermented beverage in history – older even than wine.

Modern brewing developed in Europe, where, until the Middle Ages, most beer brewing was associated with an ale yeast (Saccharomyces cerevisiae).

Lager brewing first emerged in the 13th century in Bavaria in southern Germany but became particularly common a couple of centuries later.

Because of this, brewers switched to using S. pastorianus because it could withstand colder temperatures – and the popularity of lager started to climb.

According to the study, the genome sequences of these two isolates showed that they are related to the ancestral S. eubayanus strain that initially mated with S. cerevisiae to form lager yeast S. pastorianus.

The discovery of S. eubayanus in Ireland shows that this yeast is native to Europe and it seems likely that it has lived in other parts of the continent – such as Bavaria.

It could have been that there were natural populations of the yeast in southern Germany in the Middle Ages that spawned the first lager yeast.

However, S. eubayanus likely originated in Patagonia and ‘subsequently colonised the world’, according to the researchers.

‘S. eubayanus evolved in Patagonia where it adapted to cold and harsh conditions, and then spread to the rest of the world, probably in the postglacial period,’ they say.

The next step for the brewing industry is making a beer using S. eubayanus, which could have flavour profiles that beer drinkers wouldn’t find in an ale or a lager.

In the near future, trendy beer fans could be clamouring to local artisan breweries so they can try a beer brewed with S. eubayanus for the first time.

Homebrewers have already experimented S. eubayanus and there have been attempts to use it by Dutch brewing giant Heineken.

Back in 2017, Heineken created a S. eubayanus beer called H41, named after the latitude coordinate of the beech forest in Patagonia where the yeast was taken. 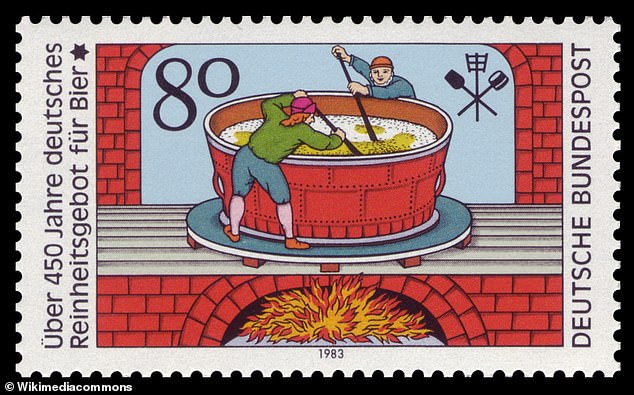 Beer purity laws in Bavaria in 1516 restricted brewing to the colder winter months to limit bacteria growth. Pictured, a stamp issued in 1983 celebrating the history of the so-called ‘Reinheitsgebot’, commemorating its 450th anniversary. While no longer actual law, the Reinheitsgebot is still regarded as an important tradition and for many brewers a guideline on how German beer ought to be made

It had a ‘full bodied taste, with spicy notes balanced by subtle hints of fruit’, Heineken said at the time.

According to one beer blogger who tasted it, it had a clear golden colour and poured like a Heineken with a ‘nice white head’.

But it had a ‘musty’ odour, a ‘medium-bodied mouthfeel’ and a fruity and slightly spicy flavour.

S. eubayanus could produce several organic compounds and enzymes that have a ‘decisive impact’ on beer’s characteristics, according to the Dublin team.

‘These novel Irish-derived strains have therefore the potential to confer unique taste profiles of interest to artisan brewing companies,’ they conclude.

The study has been published today in the journal FEMS Yeast Research.

Germans have taken their love of beer to the next level with a new detailed study of the unique molecules in ales and lagers from around the world.

Scientists in Munich used advanced mass spectrometry techniques on 467 popular beers from Europe, the US and more.

Around 80 per cent of the ‘tens of thousands’ of molecules they discovered aren’t yet described in chemical databases, they said.

Their analysis takes only 10 minutes to detect thousands of metabolites per beer, making it a powerful new method for quality control.

‘Beer is an example of enormous chemical complexity,’ said study author Professor Philippe Schmitt-Kopplin at the Technical University of Munich.

‘Thanks to recent improvements in in analytical chemistry, comparable in power to the ongoing revolution in the technology of video displays with ever-increasing resolution, we can reveal this complexity in unprecedented detail.’

Their state-of-the-art mass spectrometry method could be used for quality control in the food industry – such as identifying any dubious ingredients in beer that violate its Vorläufiges Biergesetz (Provisional Beer Law) of 1993.

Vorläufiges Biergesetz was an revision of Germany’s hallowed, 500-year-old Purity Law, known as the Reinheitsgebot.

The decree, originally imposed by the southern state of Bavaria on April 23, 1516, stated ‘no ingredients other than barley, hops and water are to be used’ in making beer – although Germans later realised the importance of beer’s fourth key ingredient, yeast.

Nowadays, beverages that are sold as beer are open to a large number of brewing types and raw materials, the researchers point out, which could lead to adulterations.

For the analysis, published in Frontiers in Chemistry, the researchers used 467 beer types – which had been brewed in the US, Latin America, Europe, Africa and east Asia – including lagers, craft and abbey beers, top-fermented beers and Belgian gueuzes.

DI-FTICR-MS can predict chemical formulas for the metabolite ions in beers, while UPLC-ToF-MS uses chromatography to predict their exact molecular structure.

They found about 7,700 ions with unique masses and formulas, including lipids, peptides, nucleotides, phenolics, organic acids, phosphates and carbohydrates – of which around 80 per cent aren’t yet described in chemical databases.

Because each formula may in some cases cover up to 25 different molecular structures, this translates into tens of thousands of unique metabolites.

‘Here we reveal an enormous chemical diversity across beers, with tens of thousands of unique molecules,’ said first author Stefan Pieczonka, a PhD student at the Technical University of Munich.

‘We show that this diversity originates in the variety of raw materials, processing, and fermentation.’

The beers’ molecular complexity is amplified by the so-called ‘Maillard reaction’ between amino acids and sugars.

The Maillard reaction is what gives bread, steaks and toasted marshmallow their toasty or sweet malty flavor.

‘This complex reaction network is an exciting focus of our research, given its importance for food quality, flavor, and also the development of novel bioactive molecules of interest for health, said Pieczonka.