The adorable, and heartbreaking, moment an orphaned wombat sucks its thumb while being rocked to sleep has been shared by an Australian sanctuary that rescued the animal.

While the cause of the mother’s death is unknown, Two Songs Sancutary staff suggests the animal was likely hit by a car, shot by farmers or killed by a hunter – these rare the typical causes of death.

The baby wombat, named Summa, was brought to the facility weighing just a little more than one pound, but the video shows her plump and calm as she is rocked to sleep.

This Southern Hairy-nosed wombat is a critically endangered species throughout the continent due to habitat destruction, illegal culling and Sarcoptic mange, which can kill up to 90 percent of the affected population.

Two Songs Sanctuary is a haven for orphaned wombats, usually found alive inside the mother’s pouch, and the animals stay at the facility for the rest of their lives. 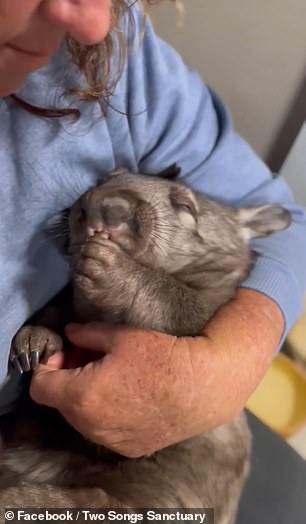 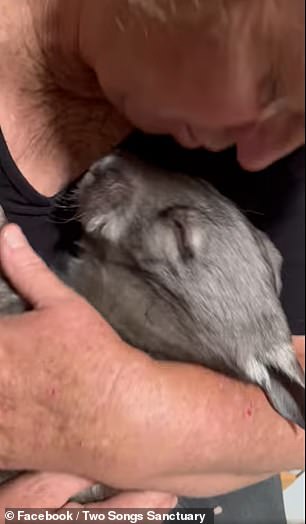 An orphaned baby wombat is in the care of Australia’s Two Songs Sanctuary after her mother was killed. The staff shared a video of the baby, named Summa, sucking her thumb and being cuddled

It is unknown when Summa arrived at the facility, but staff said three other female baby wombats welcomed her.

The four spend their time playing and cuddling with staff.

Linda Davies, of the TwoSongsSanctuary, told Newsweek: ‘Wombat joeys seem to have the world against them. Farmers destroy wombats as they believe they are a pest and do not want to share the land with the indigenous species.

‘Wombats dig large burrows for shelter and dig under fences also to get to a variety of food. Farmers also plough in the wombats’ burrows and wombats can be left to die, unable to escape.’

Wombats are short-legged, muscular quadrupedal marsupials that are native to Australia.

The Hairy-nosed Wombat is a stout and robust animal, growing a little more than two feet long and weighing up to 70 pounds.

It features a silky, gray-tan colored coat with whitish patches beneath the eyes and its teeth will grow throughout its entire life.

This is likely to be an adaptation to the harsh and abrasive vegetation that they feed on.

While they look like cute balls of fur, these animals are known to charge at humans if startled, clawing and biting the person.

Another interesting fact about wombats is that their feces is shaped like a cube, which some speculated was due to it likely having a square sphincter. 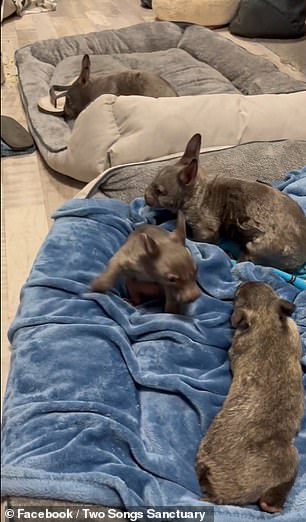 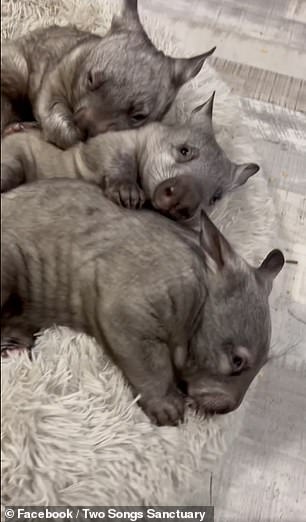 Staff said Summa has three sisters to play with. The Sanctuary shared adorable images of the other three orphaned wombats cuddling each other

Scientists recently found that the cube forms much higher in the wombat’s intestines.

The combination of feces drying out in the distal colon and muscle contractions forms the poo’s regular size and corners.

Davis also told Newsweek that wombats are hunted for food by aboriginal tribes.

However, the mange is a significant culprit in the population decrease.

Wombats in Tasmania are plagued by the infectious disease where a mite slowly eats the wombat over several months.

And some become so tormented that they have scratched themselves to death.