Why ARE colds more common in winter? Scientists discover an immune response inside the nose is suppressed when the temperature drops

It is well known that colds and flus are more common in colder months, although why this is has long been a matter of scientific debate.

Now, researchers claim to have finally solved the conundrum – and it’s to do with a previously unidentified immune response inside the nose.

According to the experts, this evolved immune response fights off viruses responsible for infections – but it’s suppressed by colder temperatures.

Their research challenges the theory that winter illnesses are more common simply because people are stuck indoors. 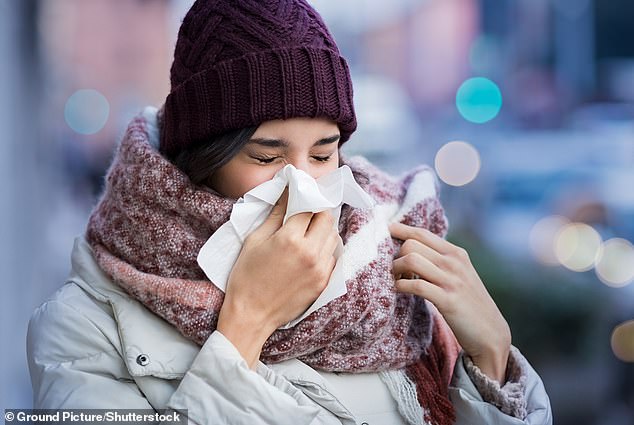 The research was led by researchers at Mass Eye and Ear hospital and Northeastern University in Boston, Massachusetts.

Cold weather and flu: Prior theories

– People are indoors more often, allowing viruses to pass more easily from one person to another

‘There’s never been a convincing reason why you have this very clear increase in viral infectivity in the cold months,’ said study author Dr Benjamin Bleier at Mass Eye and Ear.

‘Conventionally, it was thought that cold and flu season occurred in cooler months because people are stuck indoors more where airborne viruses could spread more easily.

‘Our study however points to a biological root cause for the seasonal variation in upper respiratory viral infections we see each year, most recently demonstrated throughout the Covid-19 pandemic.’

Dr Bleier and colleagues previously uncovered an innate immune response triggered when bacteria is inhaled through the nose.

Cells in the front of the nose detect the bacteria and then release billions of tiny fluid-filled sacs called extracellular vesicles (or EVs, known previously as exosomes) into the mucus to surround and attack the bacteria.

‘It’s akin to if you kick a hornets’ nest, and all the hornets come out and attack,’ said Dr Bleier.

The sacs also shuttle protective antibacterial proteins through the mucus from the front of the nose to the back of it along the airway, which then protects other cells against the bacteria before it gets too far into the body. 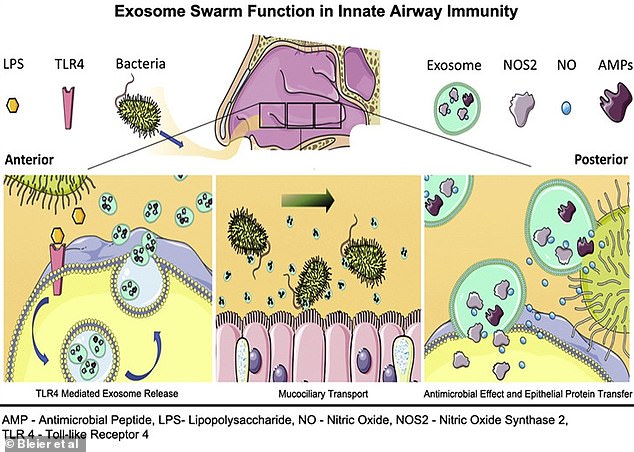 A 2018 study led by Dr Bleier uncovered an innate immune response triggered when bacteria is inhaled through the nose. It found that cells in the front of the nose detected the bacteria and then released billions of tiny fluid-filled sacs called extracellular vesicles (or EVs, known previously as exosomes) into the mucus to surround and attack the bacteria

For the new study, the researchers wanted to see if this immune response was also triggered by viruses inhaled through the nose.

Viruses are the source of common upper respiratory infections, including sinusitis, pharyngitis and the common cold.

Researchers also wanted to see whether the temperature of the air diminishes the antiviral immune response, in an attempt to explain why we become especially susceptible to colds in winter.

The team analysed how cells and samples collected from the noses of patients undergoing surgery and healthy volunteers responded to three viruses – a single coronavirus and two rhinoviruses that cause the common cold, typical of the winter flu season.

They found each virus triggered an EV swarm response from nasal cells, albeit using a signalling pathway different from the one used to fight off bacteria.

Researchers also discovered a mechanism at play in the response against the viruses, under normal body-heat conditions.

Upon their release, the EVs acted as decoys to which the virus would bind instead of the nasal cells.

Next, the team tested how colder temperatures affected this response, to simulate the drop to frosty winter conditions.

Healthy people from a room temperature environment were exposed to 39.9°F (4.4°C) temperatures for 15 minutes, so the temperature inside the nose fell by about 9°F (5°C).

Researchers then applied this reduction in temperature to the nasal tissue samples and saw that the immune response was not as strong.

The quantity of EVs put out by the nasal cells decreased by nearly 42 per cent and the antiviral proteins in the EVs were also impaired.

The findings, to be published in The Journal of Allergy and Clinical Immunology, could lead to treatments drawn from the body’s own defense mechanism.

For example, a nasal spray could be designed to increase the number of EVs in the nose, which could help fight pathogens ranging from Covid to the common cold.

The researchers hope to replicate the findings with other diseases in the future, including SARS-CoV-2, the virus that causes Covid.

It’s been under our noses all along! Study finds a never-before-seen nasal defence system against germs that releases billions of tiny bug-killing sacs

A never-before-seen defence system against germs that enter the nose was uncovered by scientists in 2018.

Cells in the nostrils release billions of tiny bug-killing sacs into mucus when they sense dangerous bacteria have been inhaled.

Not only do these sacs, called exosomes, kill bacteria, they also warn surrounding cells to protect themselves against invading pathogens.

Researchers at the Massachusetts Eye and Ear Teaching Hospital made the discovery.

To determine the exact role of exosomes, they analysed nasal tissue in the lab, as well as in patients who were undergoing surgery on their noses.

Results showed within five minutes of cells in the nose being exposed to potentially-dangerous bacteria, the number of exosomes released into the mucus doubled.

Speaking of exosomes, sinus surgeon and lead author Dr Benjamin Bleier told New Scientist: ‘They are as powerful at killing bacteria as an antibiotic.’

But not all exosomes destroy bacteria. Many move to the back of the nose where they fuse with other cells to warn them of invading pathogens.

They then deposit proteins and some of their genetic material into these cells so they too are armed against dangerous bacteria, the study found.

This may explain another discovery by the scientists, who also found tiny hairs in the nostrils sweep pathogens higher up into the nose rather than pushing them out.

Once the cells at the back of the nose have been made aware of this dangerous bacteria, the pathogens can then be swallowed and destroyed by the gut, according to Dr Bleier.

‘We have demonstrated in a live patient that the immune system reaches outside of the body, and actually goes and attacks pathogens before they get into the body, he said.

‘It is the only example of this I know of.’

The researchers plan to investigate how exosomes fuse to cells in the hope of using this process to deliver drugs more effectively.

Exosomes, which were discovered in 1983, have previously been linked to a person’s overall health, including their risk of cancer.

This comes after research released earlier this month suggested llamas may hold the key to a long-lasting flu vaccine.

Laboratory tests carried out by the pharmaceutical giant Janssen, Beerse, revealed a protein produced by the fluffy animals, as well as camels, fought off the virus in mice.