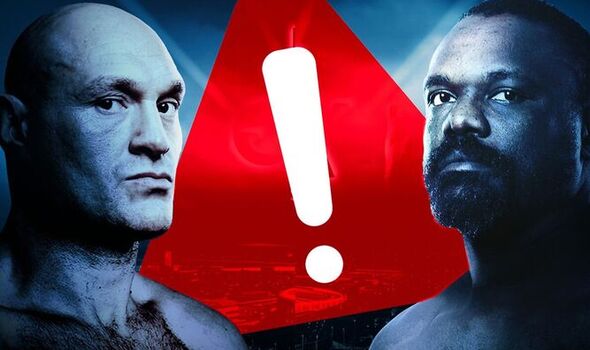 The last big boxing bout of the year will take place under the bright lights of North London tonight with Tyson Fury defending his title against arch-rival Derek Chisora. “Expect carnage on Saturday. We’re going to put on an absolutely brilliant fight,” boasted Fury during the pre-fight weigh-in.  It’s set to be another classic clash of the heavyweights and those not lucky enough to grab a ringside seat at the Tottenham Hotspur Stadium will be looking for ways to tune in on their TVs.

BT Sport has rights to all the action but to watch the bout fans will need to fork out £26.99 via the firm’s pay-per-view service. Clearly, that’s not cheap but before anyone starts attempting to look for free live streams on the web it’s worth knowing the latest warnings.

With so many people trying to watch Fury v Chisora, it won’t have gone unnoticed by cyber criminals who will now be trying to cash in by offering free ways to watch via the internet.

However, many of the websites that offer instant access to premium content are often brimming with issues that can leave those who access them with malware on their PCs or becoming the victim of ID theft.

A recent survey performed by FACT revealed that almost half of respondents who illegally stream in the UK say they or someone they know has been a victim of scams or data loss as a result.

Along with the high chance of being attacked by scams and malware, it’s also worth noting that streaming, downloading or sharing unauthorised TV content, film or sports content is a crime.

Speaking ahead of tonight’s clash Kieron Sharp, CEO, FACT said: “As anticipation grows ahead of the boxing match between the return of Tyson Fury and Derek Chisora, fans should be aware that if they choose to watch it illegitimately, not only are they breaking the law which may lead to prosecution, but they could also be exposing themselves to harm.

“Our recent study found that illegal streaming sites are rife with inappropriate content, exposing 41% of those who use them to such images. They also put viewers at risk of fraud, identity theft, and other cybercrime, with almost half (49%) of respondents who illegally stream in the UK say they or someone they know have been a victim of these crimes as a result.

“As part of the ongoing crackdown against piracy, illegal streams are brought down expeditiously during pay-per-view events, leaving viewers disappointed at having missed the sporting action.

“We want fans to enjoy what will be a huge night of boxing in the safest way possible and the only way to do that is via legal means.”

Although £26.95 clearly isn’t cheap, if you want a safe experience that isn’t going to leave you with any nasty surprises it could be a price worth paying.

As we mentioned earlier, the fight will be broadcast around 9.30pm tonight on BT Sport but Sky and Virgin Media customers can also tune in via their set-top devices.

Those that don’t have any of these services in their house can also simply log in via BT’s website.