Satellite footage has revealed the huge plume of lava, ash and toxic gases released after the world’s largest active volcano erupted for the first time in nearly 40 years.

Officials say the lava flow is mostly contained within the summit but the US Geological Service (USGS) warned the situation could change rapidly.

The volcano’s alert level has been upgraded to the highest classification and residents have been placed on alert amid fears of falling ash. 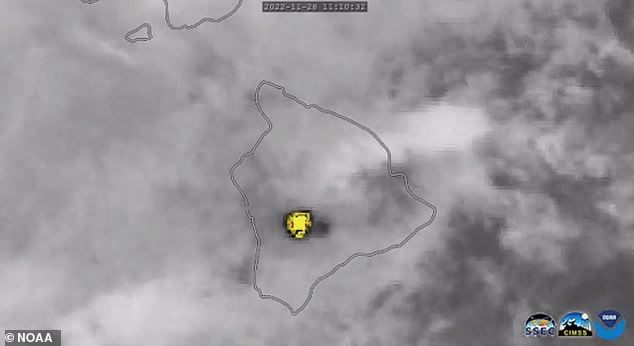 Eruption: Satellite footage has revealed the huge plume of lava, ash and toxic gases released after the world’s largest active volcano erupted for the first time in nearly 40 years

Satellites operated by the National Oceanographic and Atmospheric Administration (NOAA) observed the eruption from overhead at the weekend, with one animated image revealing both the heat signature of the eruption and a large plume of gas spreading to the northeast of Hawaii.

‘This imagery shows the heat signature and the sulfur dioxide released from the #volcano’s summit caldera, Moku‘āweoweo.’

It followed a series of warnings that an eruption was possible after more than a dozen earthquakes in the area. 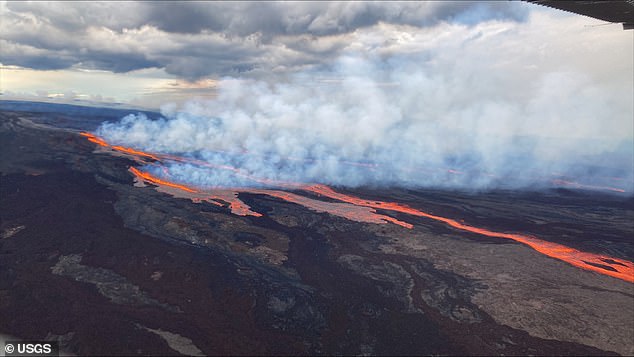 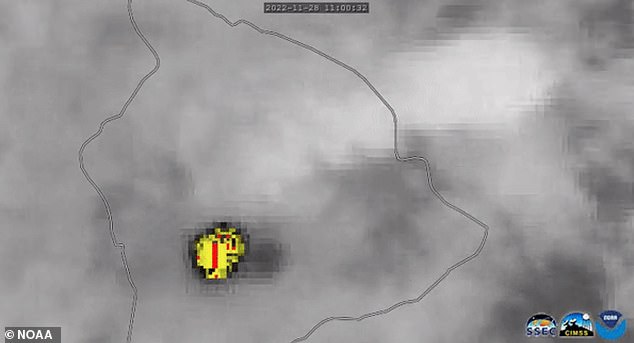 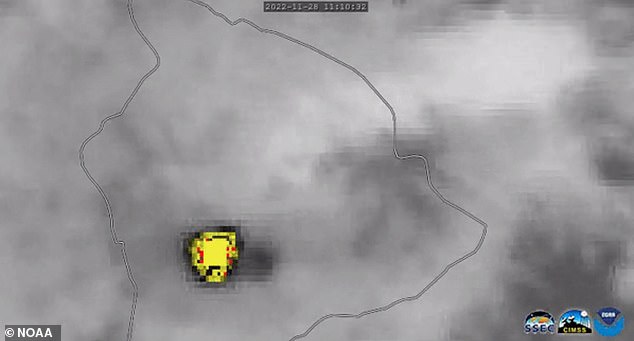 The eruption comes as native Hawaiians celebrate Lā Kūʻokoʻa, a former national holiday commemorating the signing of the Anglo-Franco Proclamation of 1843, which officially recognised the Kingdom of Hawaii’s independence and sovereignty from Great Britain and France.

The volcano’s lava rivers have historically flowed into different communities including Hilo, which has 45,248 residents, and Kukio — a billionaire’s paradise which has blossomed over the last 38 years and now counts some of the world’s richest people among residents. 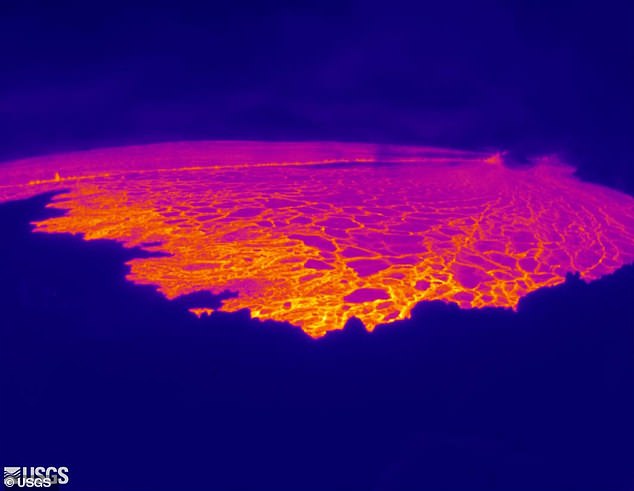 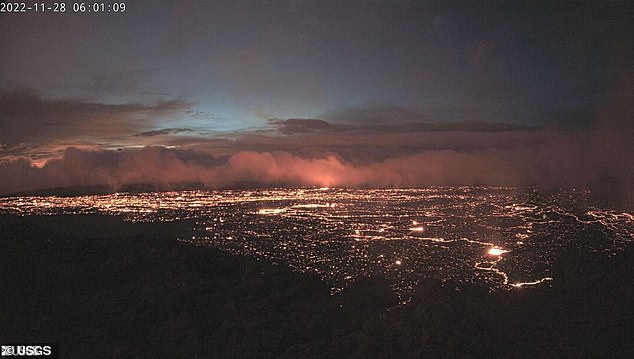 Smoke filled the air in Kona, Hawaii on Monday as daylight broke through and the Mauna Loa volcano continued to erupt

According to the USGS, Mauna Loa has erupted 33 times since 1843. Its previous eruption occurred in 1984 and sent lava flows within 5 miles of Hilo.

‘Based on past events, the early stages of a Mauna Loa eruption can be very dynamic and the location and advance of lava flows can change rapidly,’ the USGS said.

Mauna Loa is one of five volcanoes that together make up the Big Island of Hawaii, which is the southernmost island in the Hawaiian archipelago.

At 13,679 feet above the Pacific Ocean, it is not the tallest (that title goes to Mauna Kea) but it is the largest and makes up about half of the island’s land mass.

It sits immediately north of Kilauea volcano, which is currently erupting from its summit crater. 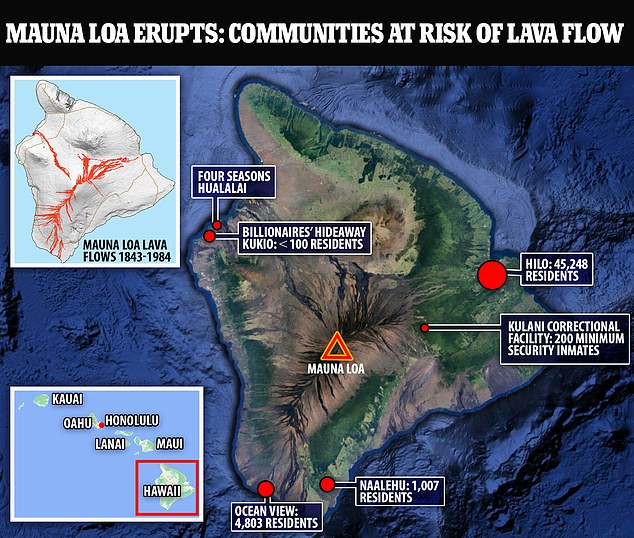 Historically, the volcano’s lava rivers have flowed into different communities including Hilo, which has 45,248 residents, and Kukio – a billionaire’s paradise which has blossomed over the last 38 years and now counts some of the world’s richest people among residents

Kilauea is well-known for a 2018 eruption that destroyed 700 homes and sent rivers of lava spreading across farms and into the ocean.

Some of Mauna Loa’s slopes are much steeper than Kilauea’s so when it erupts, its lava can flow much faster. During a 1950 eruption, the mountain’s lava traveled 15 miles to the ocean in less than three hours.

The Big Island is mostly rural and is home to cattle ranches, coffee farms and beach resorts.

It is about 200 miles (320km) south of Hawaii’s most populous island, Oahu, where the state capital Honolulu and beach resort Waikiki are both located.

WHAT IS MAUNA LOA AND WHY IS IT ERUPTING?

It is one of five volcanoes that form the Island of Hawaii in the Pacific Ocean that make up the US state of Hawaii.

The volcano started to erupt late Sunday night, according to the US Geological Survey (USGS), for the first time since 1984.

Early Monday (November 28), lava flows were contained within the summit area and weren’t threatening nearby communities.

USGS does not believe there is any risk of magma fall, but an ash fall advisory has been issued and some residents have begun to voluntarily evacuate.

The eruption remains confined within the basin at the top of the volcano, called the caldera.

WHY IS MAUNA LOA ERUPTING?

Mauna Loa has had magma sitting under the surface since the last eruption in 1984. USGS has said Mauna Loa is expanding as more magma accumulates beneath the surface.

Geologists had recorded an increase in the number of earthquakes in the Mauna Loa region between August and October.

‘Mauna Loa is considered active, even when lava is not coming out of the ground. This is because there is a magma supply, that could erupt.’

Volcanoes erupt because of the way heat moves beneath Earth’s surface. Heat is conveyed from the planet’s interior to its surface largely by convection – the transfer of heat by movement of a heated fluid.

In this case, the fluid is magma – molten or partially molten rock – which is formed by the partial melting of Earth’s mantle and crust.

The magma rises, and, in the last step in this heat-releasing process, erupts at the surface through volcanoes.

Mauna Loa erupts a hot lava that turns into a rock named basalt when it cools.

‘The Hawaiian Islands have been formed because there is a “hotspot” deep in the Earth, supplying material from the mantle that is hotter and therefore less dense than the surrounding material,’ said Dr Johnson.

‘This less dense material rises through the mantle and breaks through the crust as volcanoes. The same hotspot supplies heat for all of the volcanoes in Hawaii.

‘In the crust of the Earth, pockets of magma accumulate (sometimes called magma reservoirs or “chambers”).

‘Some pockets of magma move quickly up to the surface to erupt, and some remain in the crust for decades without erupting.’

HAS MAUNA LOA ERUPTED BEFORE?

Mauna Loa has erupted 33 times since 1843, according to USGS – but this latest eruption marks the end of the longest eruptive pause in its recorded history.

The most recent eruption, in 1984, lasted 22 days and produced lava flows that reached to within about four miles (7km) of Hilo, a city that’s home to about 44,000 people today.

The volcano has produced large, voluminous flows of basalt that have reached the ocean eight times since 1868.

This new eruption is currently confined to the summit, and there is no indication that magma is moving into rift zones – areas where the volcano is rifting or splitting apart.

Mauna Loa is the much larger neighbour to Kilauea volcano, which erupted in a residential neighbourhood and destroyed 700 homes in 2018.

But some of Mauna Loa’s slopes are much steeper than Kilauea’s, so when it erupts, its lava can flow much faster.

During a 1950 eruption, Mauna Loa’s erupted lava travelled 15 miles (24 kilometres) to the ocean in less than three hours.

The enormous size of Mauna Loa may allow it to store more magma, leading to larger lava flows when an eruption occurs.

Hawaii’s volcanoes are called shield volcanoes because successive lava flows over hundreds of thousands of years build broad mountains that resemble the shape of a warrior’s shield.

Shield volcanos are also found in California and Idaho as well as Iceland and the Galapagos Islands. Alaska’s Wrangell-St. Elias National Park has eight shield volcanoes including Mount Wrangell.