How walking in a winter wonderland can help you to love your FIGURE: Simply spending time in snowy landscapes can boost body appreciation, study finds

With December just around the corner, many of us will be looking forward to some snow to help get that festive feeling.

But snowy landscapes could have another benefit, particularly if a relative feels inclined to comment on your figure around the Christmas dinner table.

A new study from Anglia Ruskin University in Cambridge has found that spending time in the snow can make you feel better about your body.

It is thought this is because it helps distract your brain from negative thoughts about how your body looks, and forces you to appreciate how it moves instead. 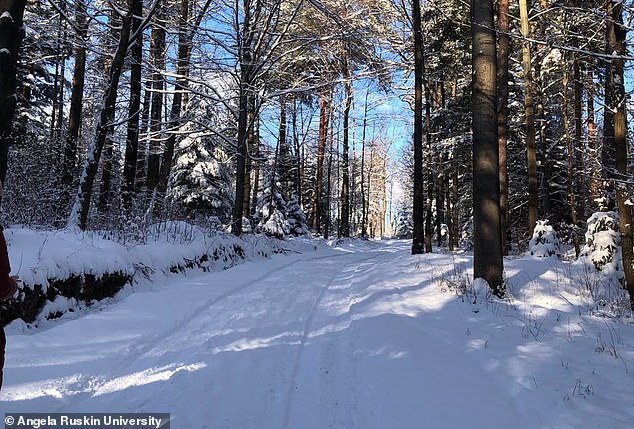 For the study,  87 female volunteers were recruited to go walking in the snow-covered Cygański Las woodland in Poland (pictured) for an average of 40 minutes

Senior author Professor Viren Swami said: ‘Natural environments help to restrict negative appearance-related thoughts and shift attention away from an aesthetic view of the body and toward greater appreciation of the body’s functionality.

‘Positive body image is important not only in its own right, but has other beneficial effects, including more positive psychological wellbeing.’

Previous research from Professor Swami has shown that green spaces, like parks and forests, and ‘blue environments’, like by the sea, can boost body appreciation.

The new study, published this month in the International Journal of Environmental Research and Public Health, aimed to see if ‘white spaces’ could have a similar benefit.

Professor Swami’s team recruited 87 female volunteers to go walking in the snow-covered Cygański Las woodland in Poland for an average of 40 minutes.

Before they did this, the women took surveys that assessed their body appreciation in a score out of five, as well as how connected they felt to nature and self-compassion. 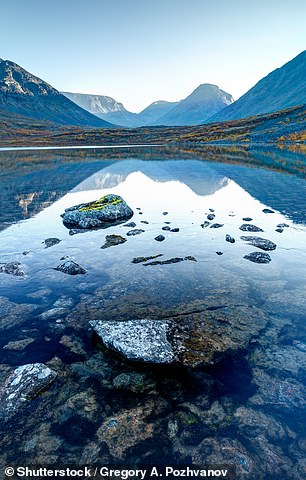 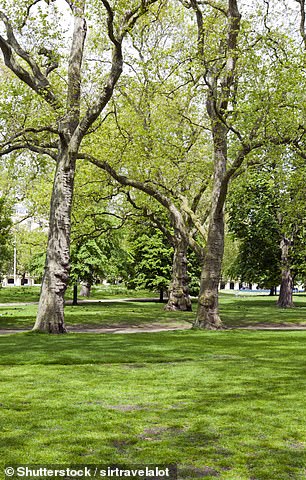 Previous research from Professor Swami has shown that spending time in green spaces, like parks and forests, and ‘blue environments’, like by the sea, help to improve body image (stock images)

Social media use is linked to body image concerns and a greater risk of young adults developing eating issues, a 2016 study found.

University of Pittsburgh School of Medicine experts found that all demographic groups were equally affected by the link between social media and eating and body image concerns.

Lead author Jaime E. Sidani said: ‘Social media combines many of the visual aspects of traditional media with the opportunity for social media users to interact and propagate stereotypes that can lead to eating and body image concerns.’

After taking the walk, they re-took the body appreciation survey.

Results revealed that their body appreciation score had increased by an average of 0.29.

In their paper, the researchers wrote: ‘Natural environments have the capacity to restore depleted psychological resources.’

Plus, given that the volunteers were walking, this may have allowed them to ‘focus more explicitly on a sense of gratitude for what their bodies allowed them to accomplish.’

The study also found that those who scored higher in self-compassion saw a greater increase in body appreciation after their walk.

The researchers, supported by academics from the Medical University of Silesia, say that these people may have ‘dispositional characteristics’ that allow them to benefit more from the natural environment.

They wrote: ‘The deliberation without attention that occurs in natural environments may allow individuals who are high in self-compassion to calm their minds or reach a state of relaxation more quickly, which in turn may lead to larger effects on state body image.’

The walk may help them recognise that ‘everyone has imperfections’ and encourage them to ‘show kindness and acceptance towards their bodies’, which may come more naturally to those high in self-compassion. 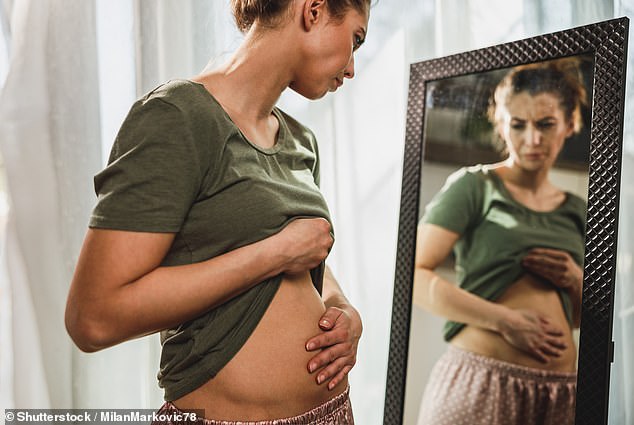 It is thought that a walk in nature helps distract your brain from negative thoughts about how your body looks, and forces you to appreciate how it moves instead (stock image)

Lead author Dr Kamila Czepczor-Bernat said: ‘A body of evidence now exists showing that nature exposure – living close to, frequenting, or engaging with environments such as forests and parks – is associated with a range of physical and psychological wellbeing benefits.’

The researchers claim this is the first study to link spending time in snowy landscapes, either alone or in a group, improve how you feel about your body.

Professor Swami concluded: ‘Our findings demonstrate the importance of ensuring that everyone can access restorative natural environments, which may be a cost-effective way of promoting healthier body image, and highlight that there are significant benefits of being outside in nature, whatever the weather.’

If you’re struggling to love your body, a new study suggests you’ll be happy with it eventually.

Researchers assessed the body satisfaction of around 15,000 men and women in New Zealand over the course of six years.

They found body satisfaction increased across the lifespan for both men and women, but women specifically started to love their body around the age of 60 and men between the ages of 59 and 64.

It’s possible that a newfound appreciation for how we look around the 60-mark coincides with our health becoming more important than our looks – for both men and women.