Takeaway giant Menulog has axed jobs at its Sydney head office as global cost-cutting in the food delivery sector, a market darling during the era of COVID-19 lockdowns, gathers pace.

Menulog, part of the Amsterdam-headquartered company Just Eat Takeaway.com, confirmed on Thursday there had been local redundancies. The move follows rival service Deliveroo pulling out of Australia earlier this month, putting 150 people out of work, and Voly, a local start-up that did rapid grocery deliveries, formally calling in administrators on November 21. 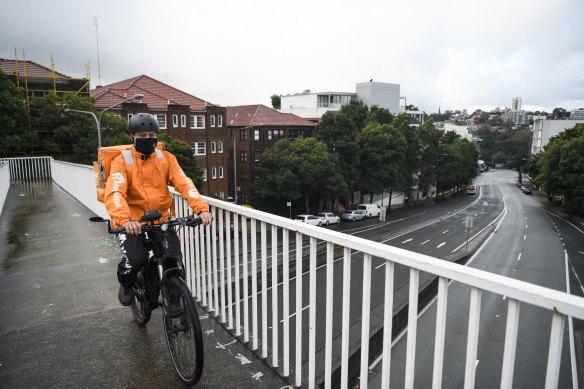 Menulog has made redundancies at its Australian head office as part of a round of global cost-cutting.Credit:Rhett Wyman

A Menulog spokeswoman would not disclose how many jobs were eliminated, but said a “small number of roles” were made redundant as part of a global restructure of Just Eat Takeaway’s customer operations team.

“Over time, due to factors like growth, natural attrition and technology improvements, there has been a gradual skew towards the number of management and support roles in the team,” the spokeswoman said in a written statement.

“To ensure we are operating as efficiently as possible, we have taken the difficult decision to reduce the number of those management and support roles.”

She said affected staff would be given support to find other jobs and “generous” redundancy provisions above legal requirements. The spokeswoman also emphasised the company’s commitment to Australia, saying its 16-year tenure gave it a strong brand and scale.

“We have the scale to continue to maintain a strong position in the market and to run a sustainable business,” she said.

Several industry sources, who were not authorised to speak publicly by their employers, described Uber as a clear leader in the food delivery market, with many times the revenue of its rivals, followed by DoorDash.

Deliveroo trailed Menulog in market share, at 8 per cent and 20 per cent respectively, according to data for this year from delivery management software company Deliverect. The size of Asian food-focused services Fantuan and HungryPanda is unclear.

The share price of Just Eat Takeaway.com has plummeted over the past two years, falling about 80 per cent from highs above €100 in October 2020 to about €20 ($31) this week as investors draw back from long-term bets on technology-enabled businesses and prioritise profitability. The company has told the market it expects to make a profit this full year despite falling orders globally, in large part by cutting costs.

Menulog was founded in Australia in 2006 as a way of ordering from restaurants online. It was bought by Just Eat in 2015 and began doing its own food deliveries via couriers who work as independent contractors. Last year, it broke with the industry, which has been fiercely protective of the model that is efficient and flexible but also means riders do not have a minimum wage, and started to employ some riders directly. But the small trial has suffered setbacks, including the industrial tribunal rejecting Menulog’s attempt to create new pay rules for the industry.