NASA’s James Webb could help search for alien life: Telescope reveals molecules and clouds in an exoplanet’s atmosphere that could be used to determine if a distant world harbors life

NASA’s James Webb Space Telescope (JWST) could be a significant player in the search for alien life after it successfully revealed the makeup of an exoplanet’s atmosphere in never before seen detail.

JWST’s powerful instruments captured atoms and molecules, along with signs of active chemistry and clouds – features Hubble and Spitzer were unable to detect when they observed the planet and those that hold evidence of signs of life.

Astronomers used WASP-39b, a hot Saturn 700 light-years away from Earth, to test the telescope’s capabilities, and the telescope used its infrared capabilities to pick up colors chemical fingerprints that cannot be detected in visible light.

The new insights, deemed a ‘game changer,’ could reveal how this exoplanet formed out of the disk of gas and dust surrounding the parent star in its younger years. 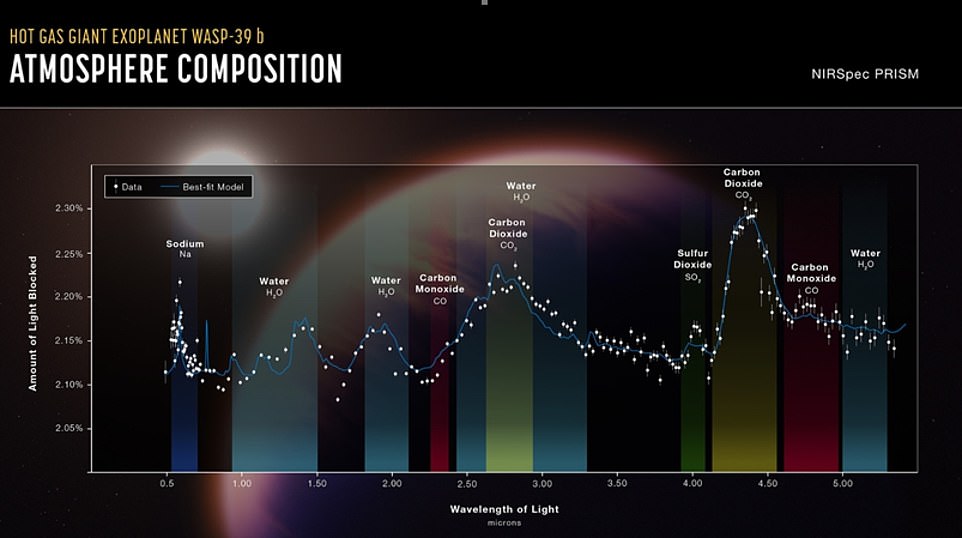 The atmospheric composition of the hot gas giant exoplanet WASP-39 b has been revealed by NASA’s James Webb Space Telescope. This graphic shows the elements the telescope detected

Natalie Batalha, an astronomer at the University of California, Santa Cruz, who contributed to and helped coordinate the new research, said in a statement: ‘We observed the exoplanet with multiple instruments that, together, provide a broad swath of the infrared spectrum and a panoply of chemical fingerprints inaccessible until [this mission].

WASP-39b is orbiting a host star that is eight times closer than Mercury is to our sun, which astronomers believe should bring a deeper understanding of how these processes affect the diversity of planets observed in the galaxy.

To uncover the exoplanet’s secrets, JWST tracked the planet as it passed in front of its star, allowing some of its light to filter through its atmosphere.

‘Different types of chemicals in the atmosphere absorb different colors of the starlight spectrum, so the missing colors tell astronomers which molecules are present,’ NASA shared in Tuesday’s announcement. 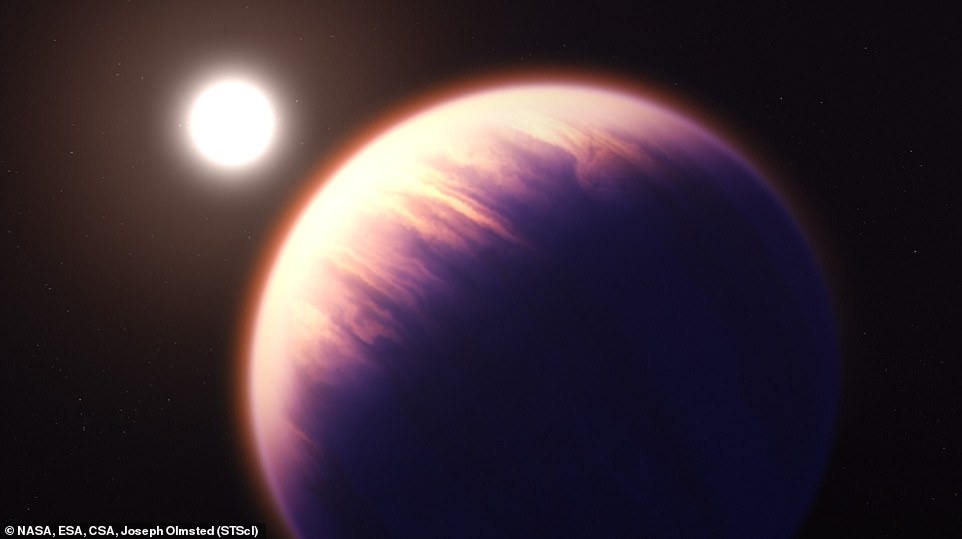 ‘By viewing the universe in infrared light, Webb can pick up chemical fingerprints that can’t be detected in visible light.’

The telescope also detected a range of elements, including sodium (Na), potassium (K) and water vapor (H20) in the exoplanet’s atmosphere.

These confirm what was previously captured by space and ground-based telescope observations, but JWST found additional fingerprints of water at these longer wavelengths that have not been seen before.

Carbon dioxide was also found in the new data, which was detected at higher resolutions, providing twice as much as previously observed.

And while carbon monoxide was detected, astronomers did not identify methane (CH4) and hydrogen sulfide (H2S) in the data.

Hannah Wakeford, an astrophysicist at the University of Bristol in the United Kingdom who investigates exoplanet atmospheres, said in a statement: ‘We had predicted what [the telescope] would show us, but it was more precise, more diverse, and more beautiful than I actually believed it would be.’

Having such a complete roster of chemical ingredients in an exoplanet atmosphere also gives scientists a glimpse of the abundance of different elements about each other, such as carbon-to-oxygen or potassium-to-oxygen ratios.

That, in turn, provides insight into how this planet – and perhaps others – formed out of the disk of gas and dust surrounding the parent star in its younger years.

WASP-39 b’s chemical inventory suggests a history of smashups and mergers of smaller bodies called planetesimals to create an eventual goliath of a planet.

Kazumasa Ohno, a UC Santa Cruz exoplanet researcher who worked on Webb data, said in a statement: ‘The abundance of sulfur [relative to] hydrogen indicated that the planet presumably experienced significant accretion of planetesimals that can deliver [these ingredients] to the atmosphere.

‘The data also indicates that oxygen is a lot more abundant than the carbon in the atmosphere. This potentially indicates that WASP-39 b originally formed far away from the central star.’