Look up tonight! Leonid Meteor Shower will peak this evening with up to 10 shooting stars flying overhead every hour

If you’re a fan of stargazing, make sure you have an eye to the skies this evening.

The Leonid meteor shower is set to peak tonight, providing you with the perfect opportunity to spot a shooting star.

The Leonids, which are described as ‘fast’ and ‘bright’ by the Royal Museums Greenwich, will peak between midnight and dawn.

For those hoping to watch the meteor shower, this event is rife with shooting stars, with 10 soaring overhead every hour.

However, the Met Office predicts that today’s rainy weather will continue well into the evening, which could make viewing conditions tricky for many Brits. 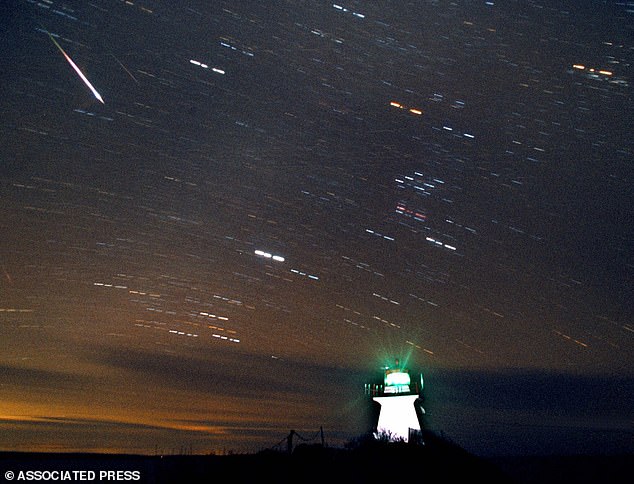 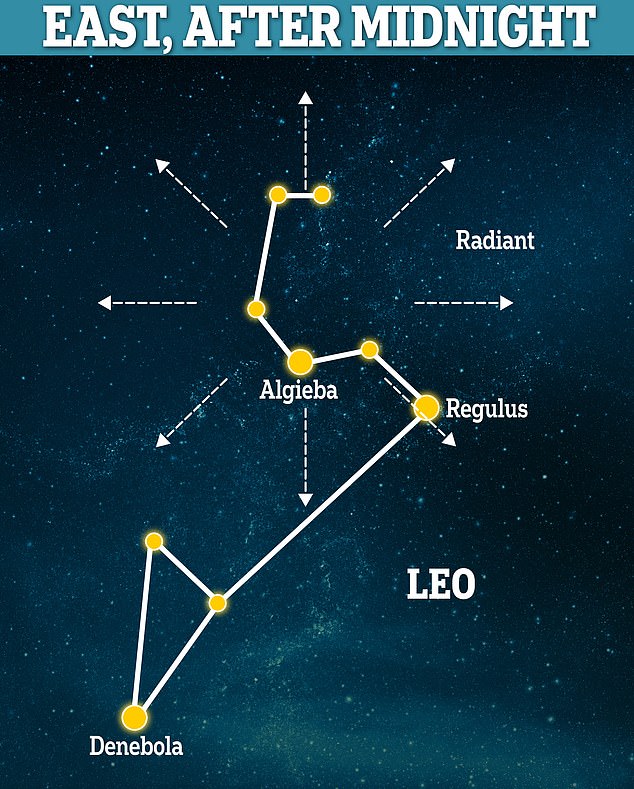 For example, if Earth passes through the tail of a comet, much of the debris burns up in the atmosphere, forming a meteor shower

What is the Leonid meteor shower?

The Leonid meteor shower caused by debris from Comet Tempel-Tuttle, which revolves around the Sun every 33 years.

As it passes through the cosmos, this comet leaves behind a trail of space debris, like dust and gas.

When this debris falls into the Earth’s atmosphere, it falls to Earth at speeds of up to 156,586mph (70 kilometres per second).

At such speeds, the debris burns up, creating dazzling streaks of light we refer to as shooting stars.

The Leonid is named as such because its ‘radiant’ – the point from where the meteors appear to originate – is at the head or ‘sickle’ of the constellation Leo.

While the shower can be seen every year, the Leonids are responsible for producing one of the greatest meteor showers in recorded history.

On November 17. 1966, the Leonids produced a historic meteor shower event of 40 shooting stars per second during a 15 minute span.

How can I watch the Leonid meteor shower?

The best way to watch a meteor shower is to find a location that is away from street lights and other sources of light pollution.

The meteors will be visible in all parts of the sky, so it is best to find a wide open space.

However, astronomers suggest that viewers should look towards the Eastern half of the sky, where the Leonids will appear to be shooting in all directions.

The Royal Museums Greenwich said: ‘Hunting for meteors, like the rest of astronomy, is a waiting game, so it’s best to bring a comfy chair to sit on and to wrap up warm as you could be outside for a while.

‘They can be seen with the naked eye so there’s no need for binoculars or a telescope, though you will need to allow your eyes to adjust to the dark.

‘However, if you miss the peak, the shower continues at a reduced rate for several days either side, so there should be plenty of chances to see the display.’

Where can I see the Leonid meteor shower?

For most parts of the world, the Leonids can be seen rising between 23:00 and midnight.

However, the shooting stars will not be visible during the early evening hours, as the source of the meteors will be far below the horizon.

As we approach midnight, some Leonid activity may be visible shooting upwards from the Eastern horizon.

Meanwhile, the best views of this display are expected to occur during the last two hours before dawn.

The American Meteor Society says: ‘Luckily, the Leonid meteors may be seen in both hemispheres but the northern hemisphere is favoured by the source being located higher in the sky and a longer night this time of year.’

Unfortunately for Brits, the Met Office warns that much of the northern and northeastern areas of the UK will see rains continue tonight, which could affect visibility.

However, the south and east have been handed hope, with predictions that it should be clearer tonight.

Speaking to MailOnline, the MET office said: ‘With low pressure influencing our weather across the UK, there is lot of cloud that will prevent much of the UK seeing the meteor shower.

‘The best chance across the UK is in the South and West where there could be cloud breaks overnight.’

When is the next meteor shower?

If you miss the peaks of the Leonids, do not worry, because you can still see them streak through the sky at a reduced intensity in the days following.

Alternatively, you could plan ahead for the Geminid meteor shower, which will be last major one of the year.

The meteors from this event can generally be relied upon for a incredible spectacle, as they are very bright, moderately fast, and are unusual in being multi-coloured.

These meteors are mainly white, some yellow and a few green, red and blue, and are partly created due to the presence of trace amounts of metals like sodium and calcium.

This year, astronomers note that the Geminid meteor shower will peak on 14-15 December.

WHY DO METEORS MAKE A SOUND?

Meteors are fragments of space rock that enter the Earth’s atmosphere and burn up as a result of the friction created when they pass through, appearing as bright streaks of light in the sky.

As well as light, this friction also creates sound, with some meteors creating a ‘sonic boom’ as they break the sound barrier, in a similar way to a fast-moving aircraft.

Since meteors can be over a hundred kilometres in altitude, and their sound waves travel much slower than the light they generate, the sonic boom is often not heard until many minutes after the flash is seen.

The boom will also only be loud enough to hear from Earth if the meteor is particularly large, enters the stratosphere below an altitude of about 30 miles (50 km) and explodes as a bolide, or fireball.

As well as the boom, some stargazers claim to have heard hissing and buzzing sounds at the same time as a meteor is seen.

This is because meteors also give off very low frequency radio waves, which travel at the speed of light.

These are inaudible, but can cause physical objects on the Earth’s surface to vibrate and produce a sound, which our ears may interpret as hissing. 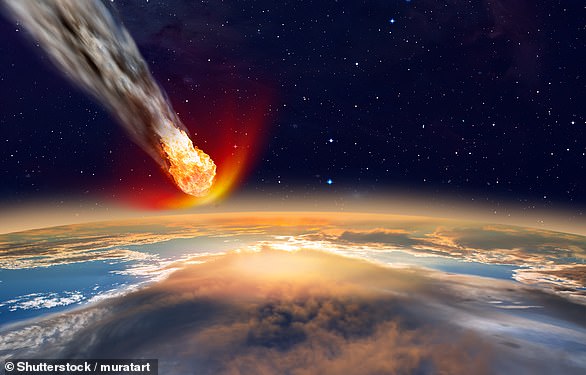 Sometimes, stargazers are able to hear a meteor as it creates a ‘sonic boom’, in a similar way that a fast-moving aircraft does (stock image)