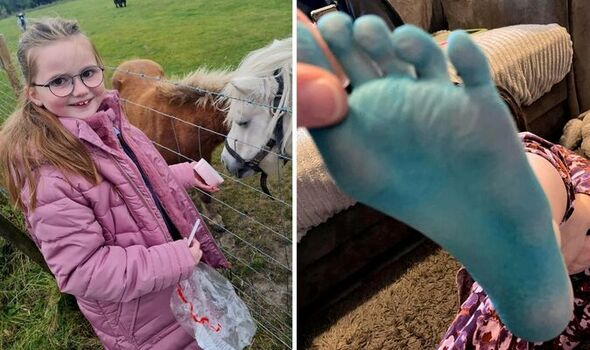 An unfortunate schoolgirl was left “looking like a Smurf” after spilling food colouring and staining her foot, much to the amusement of her family and friends.

Delilah Dolton was doing arts and crafts at school last Friday, November 4, when she dropped dye in her welly.

The open bottle filled her welly up to her ankle with food colouring, and despite the quick work of her teacher, the nine-year-old was left with a stained left foot, which has still not washed off almost a week later.

Mum Laura Dolton, from Manchester, laughed when she first heard about the harmless accident.

But she is now stumped for ideas on how to get rid of the bright blue colouring.

The 33-year-old said: “Since they went back to school in September, Delilah’s class have been having [arts and crafts] every week.

“They were making fireworks ahead of Bonfire Night, and one of the steps included the use of blue food colouring.

“Someone knocked the table, and a bottle fell into the gap between her leg and her welly – which is ever so slightly too big for her.

“Delilah went to the teachers, who put two paper towels down her welly to soak up the dye, but her foot was still wet when she got home.

“She then took her welly off, and her foot was bright blue, prompting her brother to immediately start calling her Smurf foot!

“I couldn’t help but laugh at the situation, and I was able to wash the food colouring off her welly in the shower.

“But after an hour and a half of scrubbing Delilah’s foot in the bath later that night, I had barely made a dent on her stained skin.

“Her foot is still blue, and my son is convinced she’s turning into a Smurf!”

Laura was stumped for ideas on how to dissolve the food colouring, so she turned to a Facebook group for help – posting photos of Delilah’s blue foot.

Her post has since gone viral, racking up over 8,000 likes and hundreds of comments from fellow parents amused by the unlikely accident.

And, Delilah says she also finds the situation funny, and is not largely concerned about her blue foot.

The youngster said: “At first when it fell in my welly, I panicked. But when I got home and took my welly and sock off, I couldn’t stop laughing.”