The VR headset designed to KILL you: Oculus creator develops a terrifying device that ‘instantly destroys your brain’ if you die in a virtual game

The founder of Meta’s Oculus platform might have trouble finding volunteers who will try his latest creation – a VR headset that can literally kill you.

NerveGear, created by 30-year-old Oculus founder Palmer Luckey, instantly ‘destroys the brain’ of the user when they die in a virtual game.

It looks like a normal headset apart from the three terrifying ‘explosive charge modules’ that are pointed at the user’s skull.

When the user dies virtually during gameplay, the modules fire at their head, killing them instantly at the same time.

Luckey admitted the device is not quite finished, although he may have trouble getting clearance to use it even when it is. 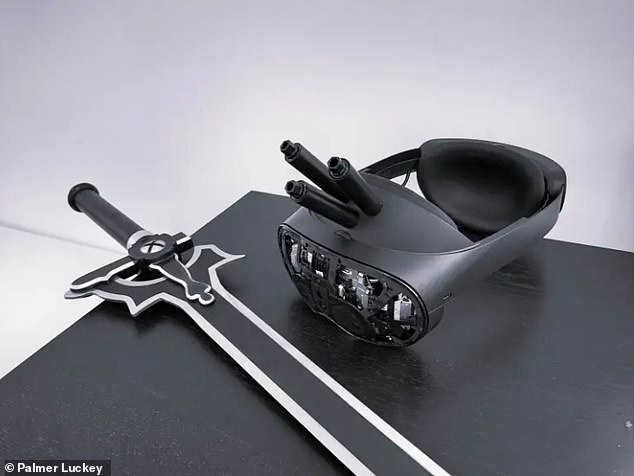 NerveGear instantly ‘destroys the brain’ of the user when they die in a virtual game, thanks to three terrifying ‘explosive charge modules’ that are pointed at the user’s skull

NerveGear is an unfinished device created by US tech entrepreneur Palmer Luckey.

When the user dies virtually during gameplay, the modules fire at their head, killing them instantly.

Luckey, who sold his firm Oculus to Meta for $3 billion in 2014 at the age of 21, described the ‘incredible’ device in a blog post.

‘The idea of tying your real life to your virtual avatar has always fascinated me – you instantly raise the stakes to the maximum level and force people to fundamentally rethink how they interact with the virtual world and the players inside it,’ he says.

‘Pumped up graphics might make a game look more real, but only the threat of serious consequences can make a game feel real to you and every other person in the game.

‘This is an area of videogame mechanics that has never been explored, despite the long history of real-world sports revolving around similar stakes.’

The device was inspired by Sword Art Online, an anime series featuring a VR game of the same name, accessible with a helmet called NerveGear, which stimulates the user’s five senses via their brain.

In the series, players can experience and control their in-game characters with their minds while wearing NerveGear.

But when 10,000 players log into the game online for the first time, they discover that they are unable to log out – and that removing their helmet would be fatal.

‘Gamers were trapped by a mad scientist inside a death game that could only be escaped through completion,’ Luckey explains.

‘If their hit points dropped to zero, their brain would be bombarded by extraordinarily powerful microwaves, supposedly killing the user.

‘The same would happen if anyone in the real world tampered with their NerveGear, the virtual reality head-mounted-display.’

In the game, NerveGear contained a microwave emitter that could be overdriven to lethal levels, but Luckey has used an alternative – explosive charge modules.

These are tied to a a sensor that can detect light, including when the screen flashes red at a specific frequency to indicate virtual death.

‘When an appropriate game-over screen is displayed, the charges fire, instantly destroying the brain of the user,’ Luckey says.

Luckey, who has an estimated net worth of $1.4 billion, claims the device is still in development, as he has so far ‘only figured out the half that kills you’.

‘The perfect-VR half of the equation is still many years out,’ he says. 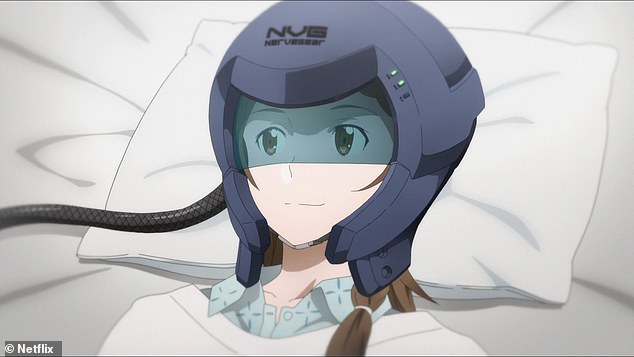 The device was inspired by Sword Art Online, an anime series featuring a VR game of the same name, accessible with a helmet called NerveGear, which stimulates the user’s five senses via their brain

Luckey also called NerveGear ‘a piece of office art’ and a ‘thought-provoking reminder of unexplored avenues in game design’.

‘It is also, as far as I know, the first non-fiction example of a VR device that can actually kill the user,’ he adds. ‘It won’t be the last.’

Luckey, a video game enthusiast and now owner of defense contractor Anduril Industries, began Oculus when he was just 15, working on prototypes in his parents’ garage.

He started developing head-mounted VR displays when he was still in school, and was in college when he created the first prototype of a consumer-priced VR headset called the Oculus Rift, although he eventually left to work on the project full time.

Luckey left Meta (then known as Facebook) back in 2017, three years after Oculus was taken over by Mark Zuckerberg’s company.

The young entrepreneur later told CNBC he ‘got fired’ from Facebook ‘for no reason at all’, although he said the fact he gave $10,000 to a pro-Trump group might have had ‘something to do with it’.

The £1,499 headset, aimed at architects, engineers and designers, among others, boasts new features that are meant to improve users’ perception of actually being in the presence of others.

It is 40 per cent thinner than the Quest 2 due to new pancake lenses that also delivers 75 per cent more contrast and includes new self-tracking controllers that ‘work like an extension of your hand’.

Quest Pro was touted by Zuckerberg as a ‘gamechanger’ for bringing the metaverse to life.

Zuckerberg, who co-founded Facebook in his dormitory room at Harvard University in 2004, has described the metaverse as an ’embodied internet’.

Within years, Facebook users will be able to use the platform not on their phones or computers, but by donning a headset.