Discovery that rewrites Italy’s history: More than two dozen bronze statues are unearthed after being perfectly preserved in Mediterranean mud for over 2,000 years – dig changes understanding of how ancient Italians transitioned into the Roman Empire

More than two dozen beautifully preserved bronze statues fashioned 2,000 years ago have been pulled from ancient thermal baths in Tuscany, Italy in a new discovery that ‘will rewrite history’ about the transition from the Etruscan civilization to the Roman Empire.

Some of the bronzes are entire human-like figures of deities, while others are of individual body parts and organs which would have been offered up as votive offerings to the gods for intervention for medical cures via the thermal waters, the ministry said in a statement.

The trove of artifacts suggests that while the Etruscans and Romans were entangled in conflict between the second century BC and first century AD, the groups living in this area prayed together to deities in the sacred sanctuary.

This, according to archaeologists, is the conclusion because the statues, including depictions of Apollo and Igea, the ancient Greek god and goddess of health, bear both Etruscan and Latin inscriptions.

The new Italian Minister of Culture, Gennaro Sangiuliano, describes them as ‘an exceptional discovery for Italy’ and ‘immense and unique treasures.’ 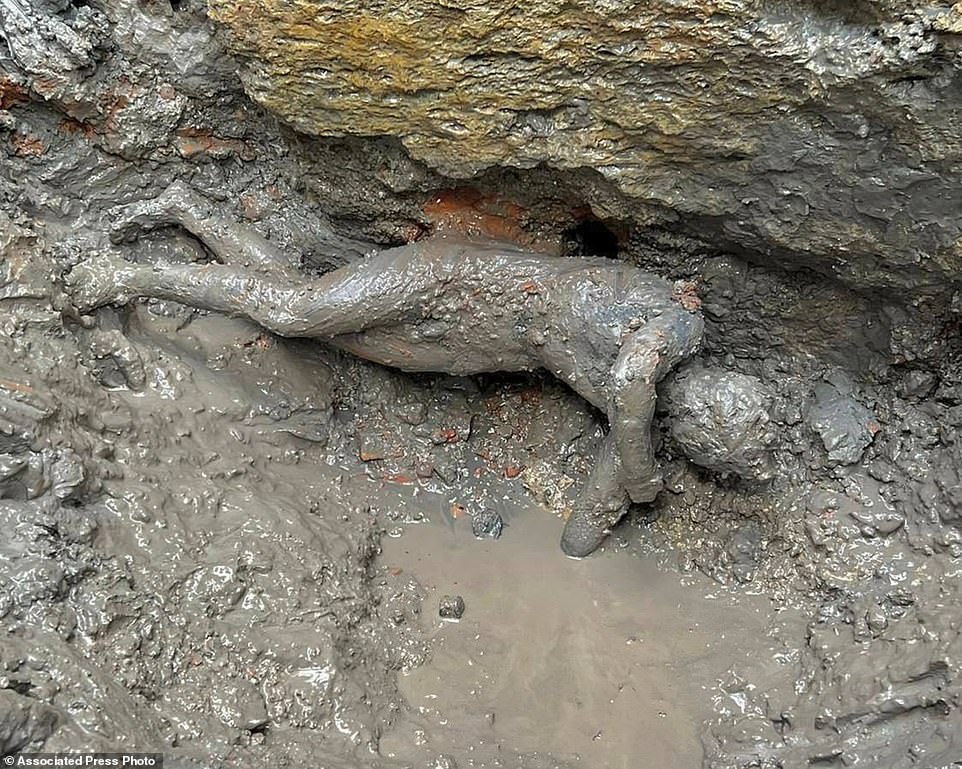 Most of the Etruscan civilization migrated to Italy from Libya and what is now Turkey about 2,500 years ago – nearly 500 years before the Roman Empire gave rise.

While in Italy, Etruscans controlled most of northern and southern regions by becoming a trading power in the Mediterranean.

They started to lose their foothold once the Greeks took control of Sicily, which was shortly followed by the Roman Empire in 27 BC that began to spread across the nation.

The Roman Empire began to take Etruscan cities one, by one, while also destroying any evidence that it existed – it is very rare to find artifacts from the Etruscan civilization.

However, not all was war between the two, as the recent discovery shows the groups once lived in harmony. 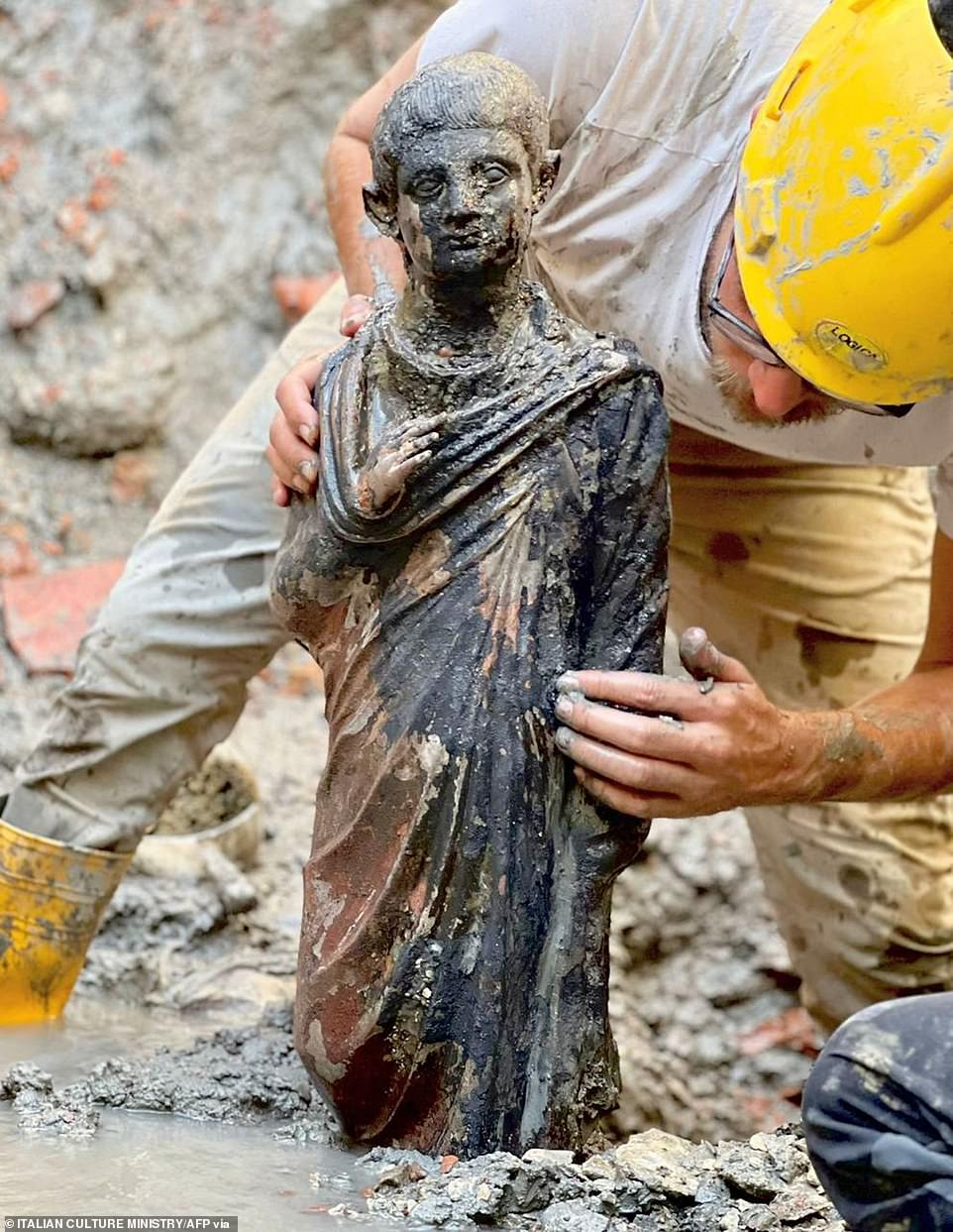 The statues are beautifully preserved thanks to being encased in mud for more than 2,000 years. They include both Etruscan and Latin inscriptions, suggesting the groups did live in harmony although their civilizations were at war 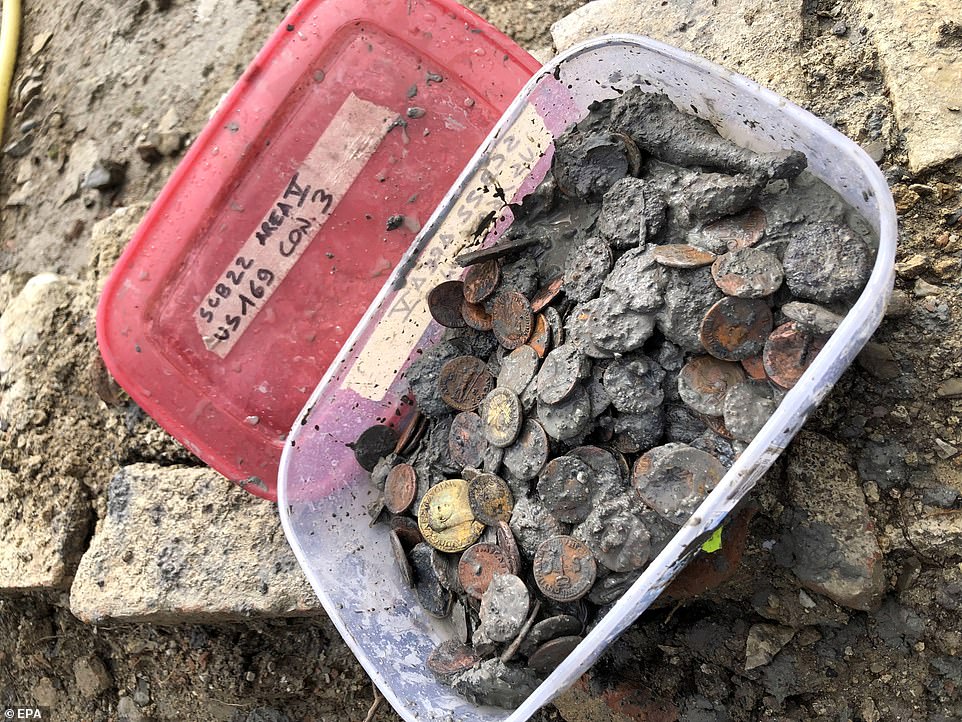 Archaeologists pulled the figurines and 6,000 coins from the mud, which kept the ancient items in a perfect state of conservation. Etruscans migrated to Italy from Libya centuries before the rise of the Roman Empire 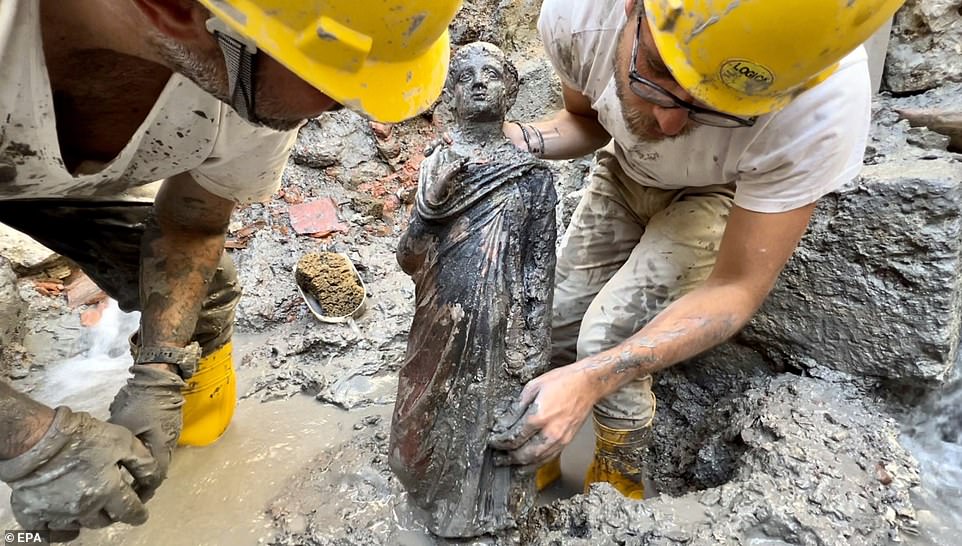 The Etruscans lived on the Italian peninsula about 2,500 years ago, before the peak of the Roman Empire, and not much is known about their culture except that they were a trading power in the Mediterranean because it flourished with minerals 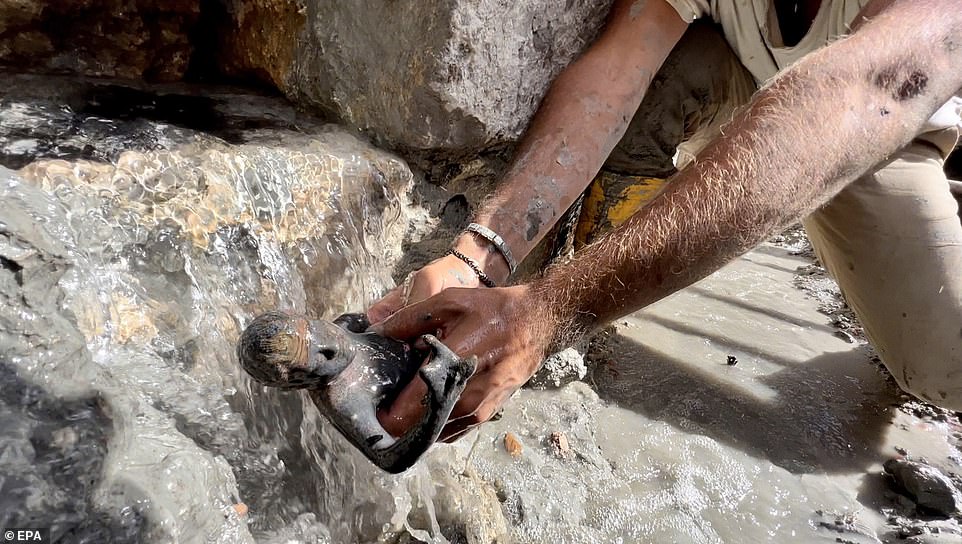 The discovery is being hailed as a sensational find, noting the statues, depicting Hygieia, Apollo and other Greco-Roman divinities, used to adorn a sanctuary before they were immersed in thermal waters, in a sort of ritual, ‘probably around the first century AD’

The statues, part of excavations that started in 2019, were discovered in San Casciano dei Bagni, a hilltop town in the Siena province, about 100 miles north of Rome.

Jacopo Tabolli, who coordinated the dig for the University for Foreigners in Siena, said the discovery was significant because it sheds new light on the end of the Etruscan civilization and the expansion of the Roman Empire.

‘While there were social and civil wars being fought outside the sanctuary … inside the sanctuary the great elite Etruscan and Roman families prayed together in a context of peace surrounded by conflict,’ Tabolli said.

‘This possibility to rewrite the relationship and dialectic between the Etruscan and Romans is an exceptional opportunity.’

He also noted that the sanctuary was active from the third century BC until the fifth century AD.

The sacred area was then abandoned as Christianity began to take hold, which led to the statues being submerged in the water and the pools were closed off with massive pillars and stones.

The find represents the largest deposit of bronzes from this era in Italy and it is also the longest surviving antiquities from the period are primarily in terracotta, the ministry said.

‘It’s a discovery that will rewrite history,’ Tabolli said in a statement, noting its shows when the Etruscans were being assimilated into Roman society, following centuries of prolonged territorial warfare.

Massimo Osanna, a top culture ministry official, called it one of the most remarkable discoveries ‘in the history of the ancient Mediterranean’ and the most important since the Riace Bronzes, a giant pair of ancient Greek warriors, were pulled from the sea off the toe of Italy in 1972. 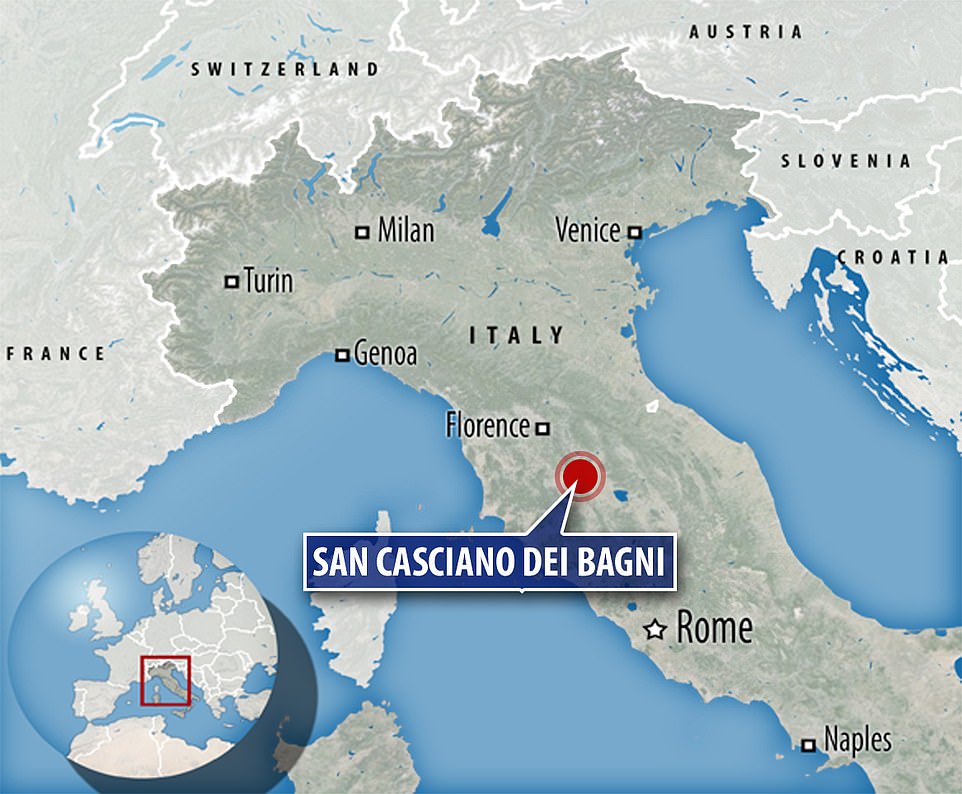 The statues were discovered in San Casciano dei Bagni, a hilltop town in the Siena province, about 100 miles north of Rome 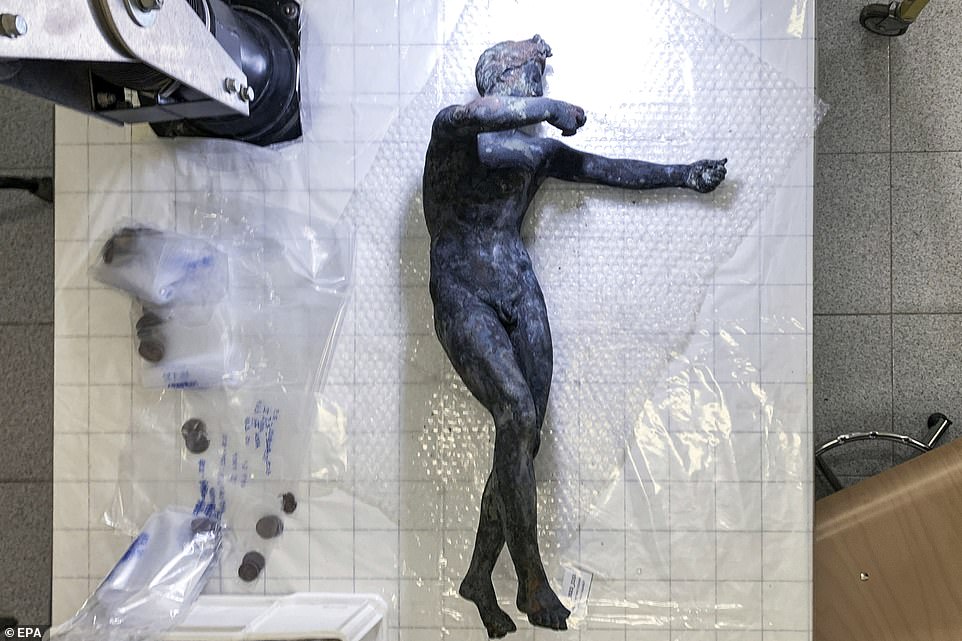 Many of the statues are still intact, holding on to the details that were used to create them more than 2,000 years ago 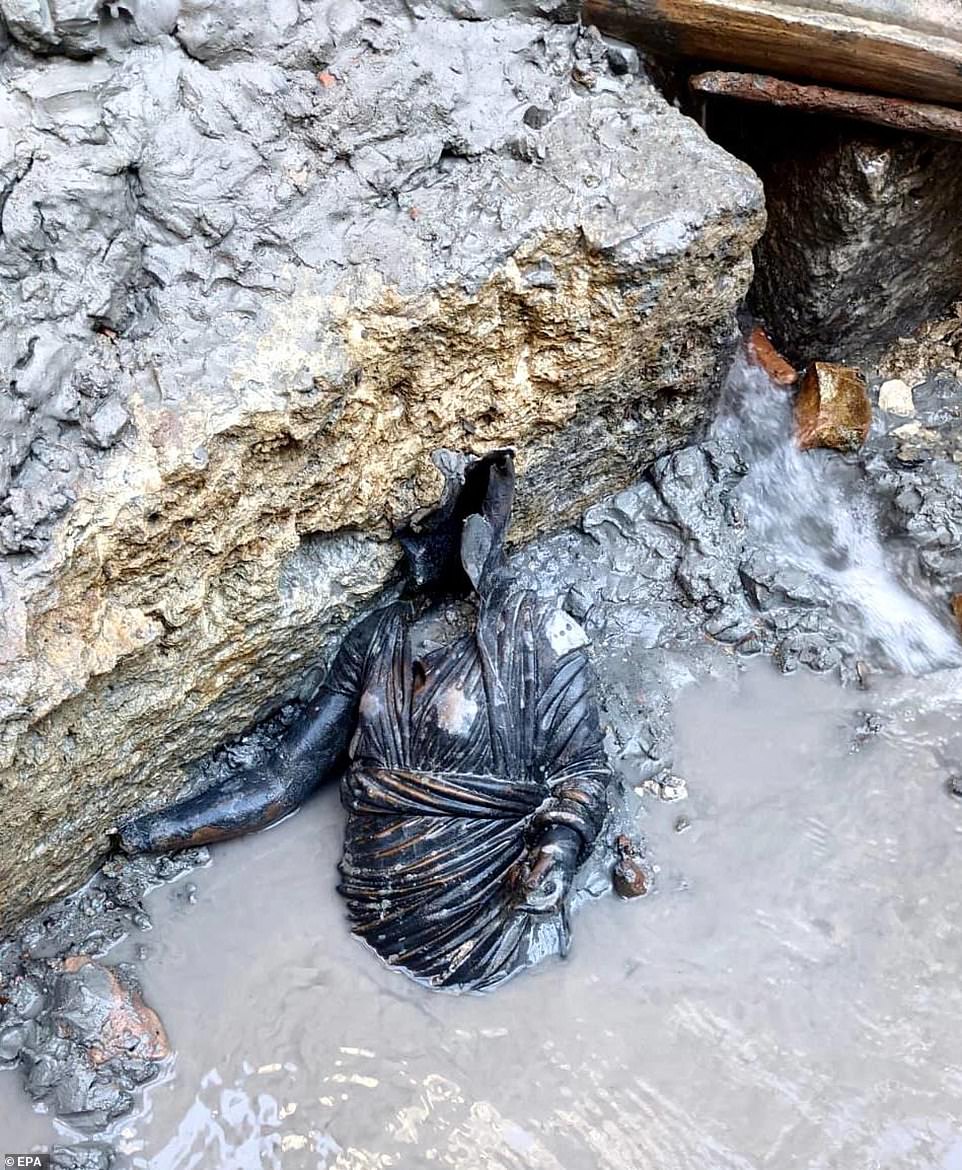 The statues were given as offerings to gods in rituals and both civilizations were pray together at the site, and at the same time 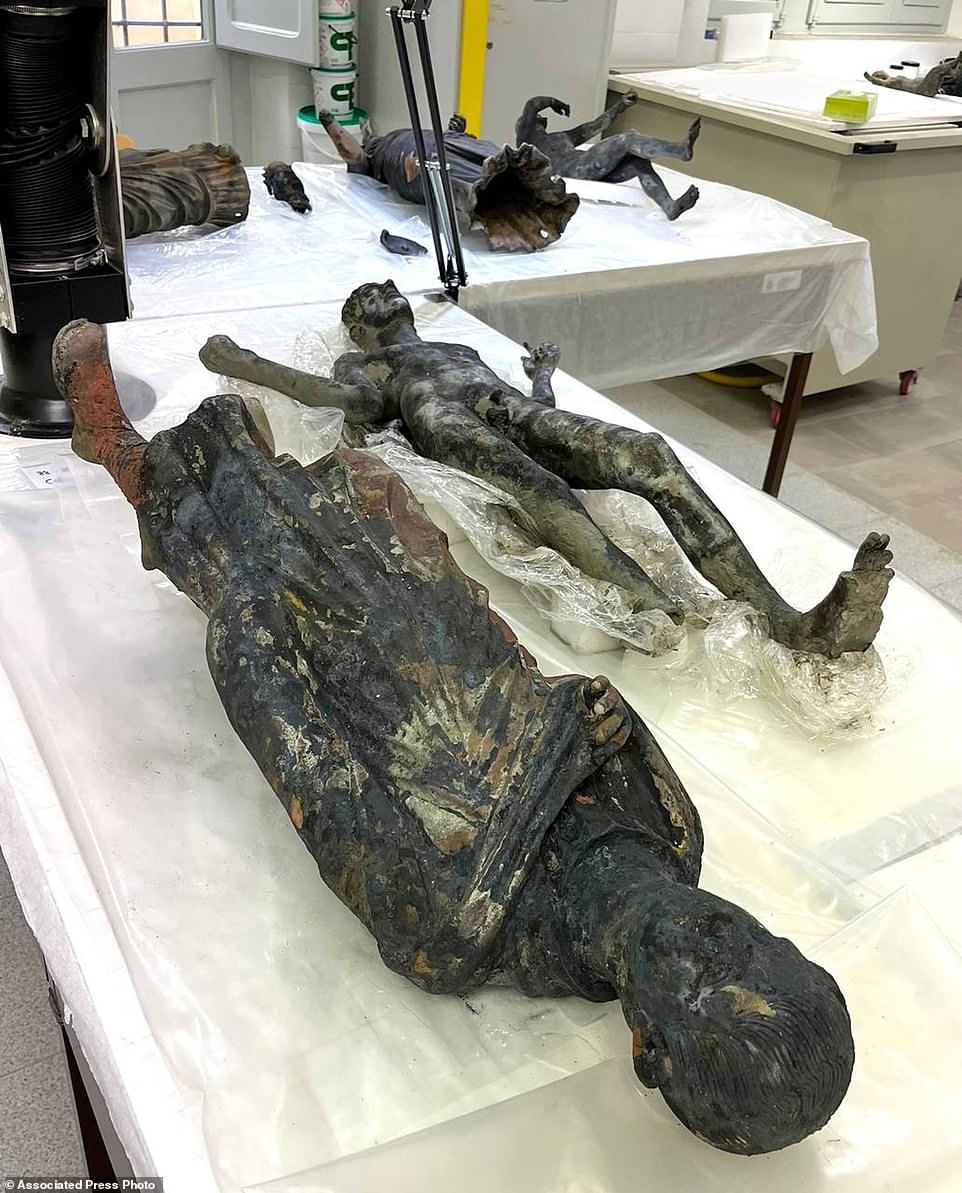 The archaeologist said his team had recovered 24 large statues, plus several smaller statuettes, and noted that it was unusual for them to be made out of bronze, rather than terracotta

It was an ‘era of great conflicts’ and ‘cultural osmosis’, in which the Great Bath sanctuary of San Casciano represented a ‘unique multicultural and multilingual haven of peace, surrounded by political instability and war,’ the ministry said.

The statues were covered by almost 6,000 bronze, silver and gold coins, and San Casciano’s hot muddy waters helped to preserve them ‘almost like as on the day they were immersed,’ Tabolli said.

The archaeologist said his team had recovered 24 large statues, plus several smaller statuettes, and noted that it was unusual for them to be made out of bronze, rather than terracotta.

The statues including etchings of what the experts believe are the names of powerful local families, who may have paid to have the artifacts commissioned. 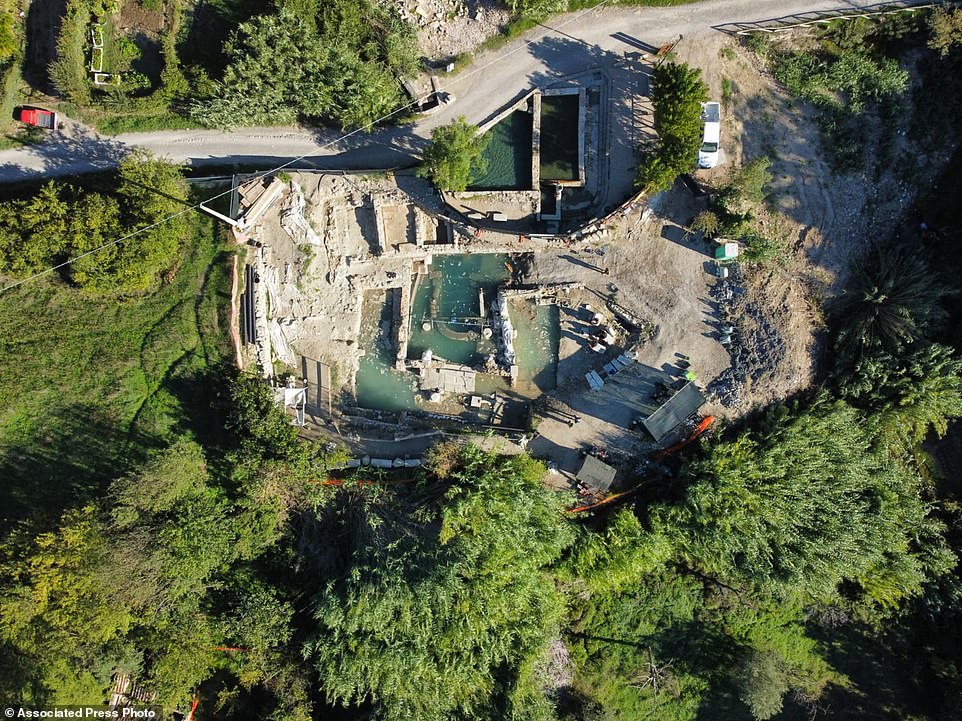 It was an ‘era of great conflicts’ and ‘cultural osmosis’, in which the Great Bath sanctuary of San Casciano represented a ‘unique multicultural and multilingual haven of peace, surrounded by political instability and war 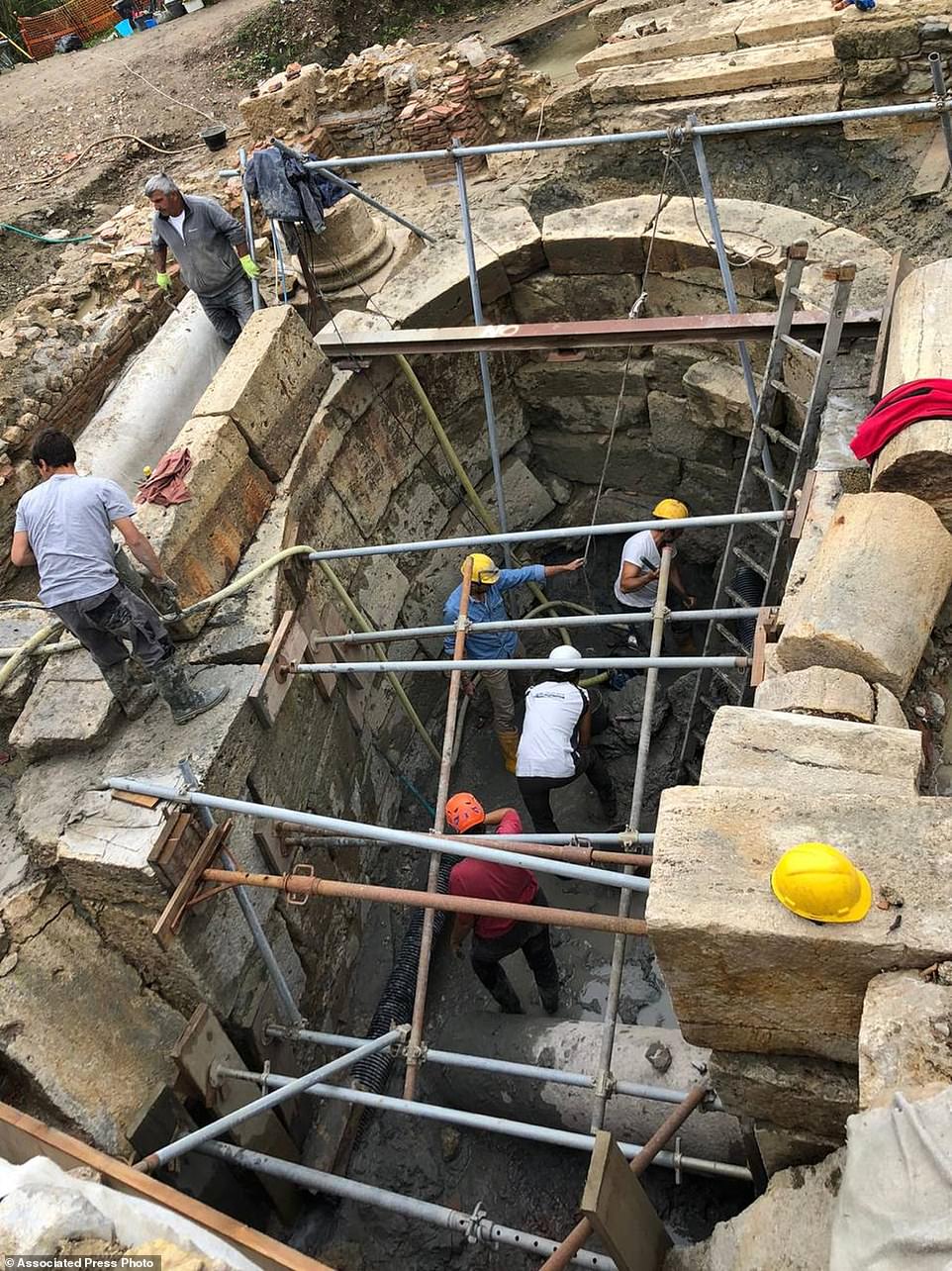 Archaeologists work at the site of the discovery of two dozen well-preserved bronze statues from an ancient Tuscan thermal spring in San Casciano dei Bagni, central Italy. The sacred area was then abandoned as Christianity began to take hold, which led to the statues being submerged in the water and the pools were closed off with massive pillars and stones

In 2016, researchers uncovered a 2,500-year-old sandstone tablet at the Poggio Colla site in northern Etruria, northeast of modern-day Florence.

They believe the slab, weighing around 500 pounds, is a rare example of an Etruscan sacred text, with at least 70 legible letters and punctuation marks, and possibly the name of a god or goddess.

Archaeologist Professor Gregory Warden, principal investigator of the Mugello Valley Archaeological Project, said in a statement: ‘This is probably going to be a sacred text, and will be remarkable for telling us about the early belief system of a lost culture that is fundamental to western traditions.

Most Etruscan discoveries are typically grave and funeral objects, for example.

The slab weighs around 500lbs and it is nearly four feet tall by more than two feet wide.

It has at least 70 legible letters and punctuation marks, said Professor Warden, main sponsor of the project.

It is likely to contain words in the lost language that have never been seen before.

The slab was discovered in the foundations of a monumental temple where it had been buried for more than 2,500 years.

Scholars in the field predict the stele, the name given to this kind of tablet, will provide a huge amount of new knowledge about the lost culture of the Etruscans.

Who were the Etruscans who once controlled Italy before the Roman Empire? 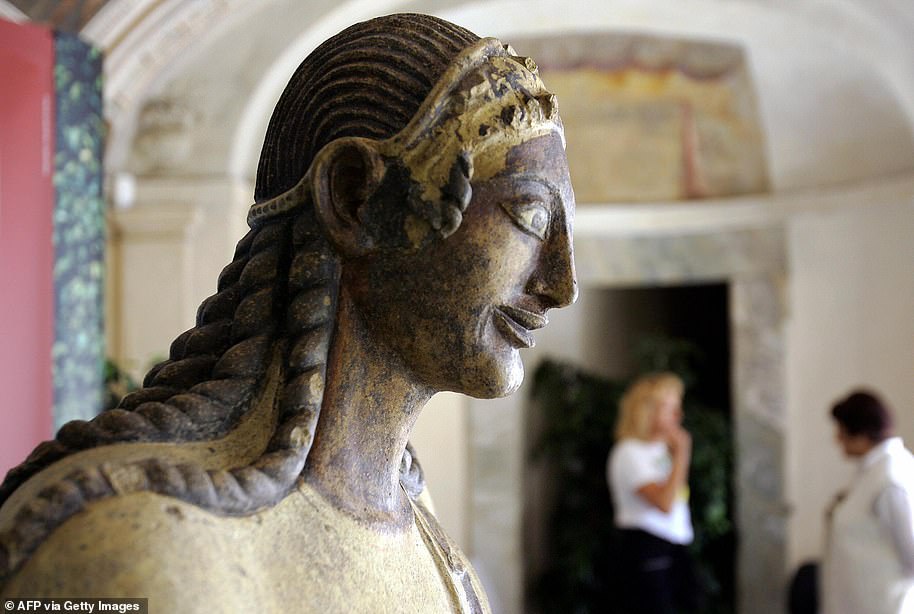 The Apollo of Veio,  a masterpiece of Etruscan art dating to the sixth century BC

The Etruscan civilization lived in ancient Italy in the area corresponding roughly to Tuscany, western Umbria, and northern Lazio.

Early Etruscan inscriptions date back to 700 BC, and the civilisation was assimilated into the Roman Republic in the late 4th century BC.

They once ruled Rome and influenced Romans on everything including religion, government, art and architecture.

Considered one of the most religious people of the ancient world, religion spread throughout Etruscan life, and ruling magistrates also exercised religious authority.

Etruscans were a highly cultured people, but very little of their writing has been preserved, mostly just short funerary inscriptions with names and titles, said archaeologist Professor Ingrid Edlund-Berry from The University of Texas at Austin.

‘So any text, especially a longer one, is an exciting addition to our knowledge,’ said Edlund-Berry, an expert in the civilisation.

‘It is very interesting that the stele was found within the walls of the buildings at the site, thus suggesting that it was re-used, and that it represents an early phase at the site.’