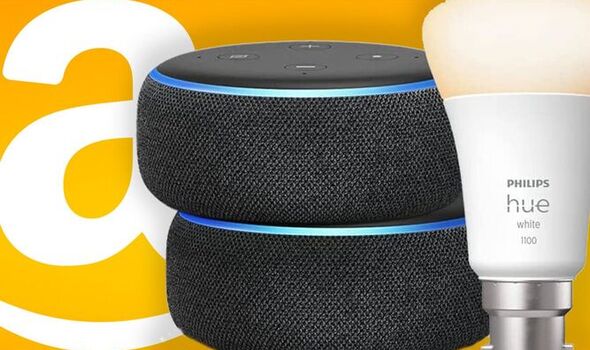 There’s a very tempting bundle from Amazon which offers customers the chance to bag two Echo Dot speakers and Philips Hue smart lightbulb for just £34.98 – that’s a whopping 65 percent saving and basically means you’re getting a top-rated Dot and energy-saving bulb for free. If you head to Amazon’s website you’ll find the Echo Dot (3rd Gen) is usually priced at £39.99.

You can pick up an Echo Dot bundle for just £34.98 in the latest Amazon sale. This deal includes two Dot speakers and a smart bulb with this package usually costing almost £100!

This new Amazon deal is one to check out as it offers two speakers and that smart light for the same price as one Echo.

Along with saving you money at the checkout, the Philips Hue bulb can also cut down on electricity usage thanks to its smart features which include being able to set it to automatically turn off at night.

It can also be fully controlled via Alexa voice commands which means you can light up a room just with your voice.

If this deal sounds enticing then we’ve got full details below:

For those wanting a more visual experience from their smart speaker, Amazon has also launched another money-saving offer that includes two Echo Show 5 devices plus a Hue bulb for just £72.98.

This bundle usually costs £169.97 so there’s a whopping 57 percent saving to be made. If you weren’t already aware, the Echo Show 5 features a XX-inch screen which can show family photos, timers and what the weather is going to be like.

A camera also helps you make video calls and there are some decent rear-facing speakers which will fill a room with sound. Amazon normally sells the Echo Show 5 for £74.99 so, once again, there’s a massive saving to be made if you opt for this bundle instead.

If this deal sounds enticing then we’ve got full details below:

These incredible deals aren’t even part of Amazon’s Black Friday sale with the online retailer not yet unleashing its bargains.

Expect more news on its next sale in the coming weeks with Black Friday taking place on November 25 this year.

Want to know more about all the best upcoming deals? Check out our full Black Friday 2022 guide with early deals, top tips and how to spot a bargain.

Some stores including Argos, Currys and Virgin Media have also already started their Black Friday discounts and you can find full details about their offers below.

What is Black Friday

Black Friday was started in the United States as a way for retailers to drum-up extra sales ahead of the holidays. The one-day sales event would see millions of people queue up outside high street shops to secure the best Black Friday deals, dubbed “doorbusters”. Held on the first Friday after the Thanksgiving celebrations, Black Friday is no longer confined to the shores of the United States – it has become a global phenomenon.