Fast fashion is ‘choking Africa in dead white people’s clothes’: Mountains of garments promised to be reused by brands like H&M and Zara are instead flooding waterways of Ghana

Parts of Africa are drowning in millions of used garments the fast fashion industry ships over each year – even though big names like H&M and Zara have made pledges to recycle the used clothing.

H&M, a major offender in the industry, produces three billion garments a year alone and only recycles about 10 percent of them – the rest is shipped to places like Accra, the capital of Ghana, where there are heaps of used clothing flooding waterways.

The fast fashion industry, which includes Zara that is less than 50 percent environmentally sustainable, churns out a total of 100 billion a year and recycles just one percent, Bloomberg reports.

Dozens of African countries had hope the import of what Gahanna refers to as obroni wawu, or dead White people’s clothes, would be banned because the influx is too overwhelming for communities to sustain and the quality is too poor the clothes cannot be worn. 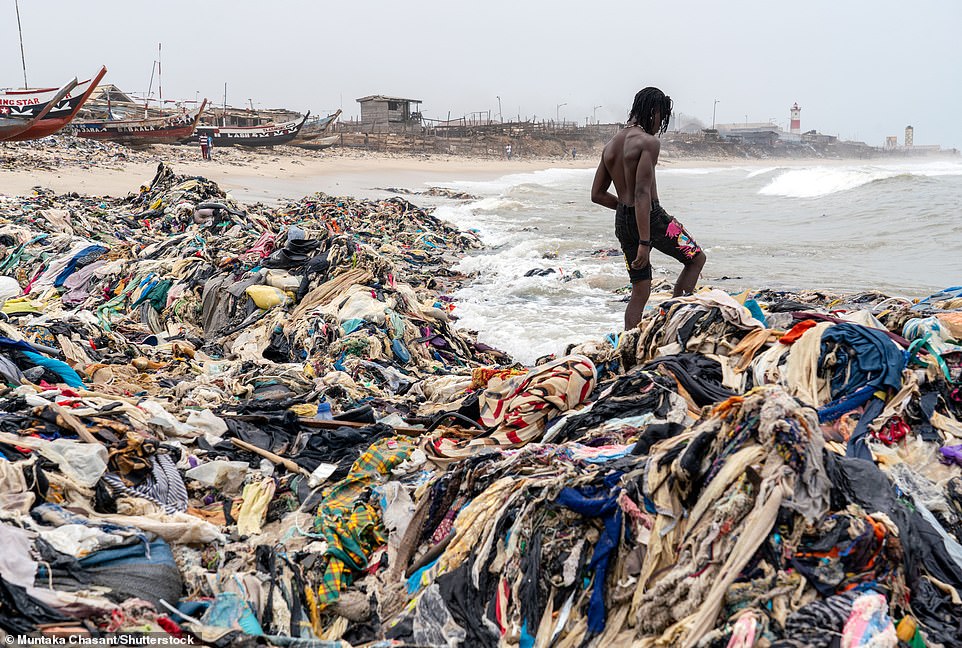 Parts of Africa are drowning in millions of used garments the fast fashion industry ships over each year. Pictured is a fishing community of Jamestown in Accra, where the beaches are covered with discarded secondhand clothes

The problem companies face with their ‘sustainable’ clothing programs is the time and money that goes into repurposing, and the easiest solution for them is to simply send them somewhere else.

A bank located in Accra that stands 65 feet tall was not formed by Mother Nature, but was made by layers of discarded clothing dumped on top of each other.

According to ABC, more than 15 million used garments make their way into the city from the UK, Europe, North American and Australia.

At least 40 percent are poor quality, making them worthless, and are sent straight to landfills that are spilling over into populated areas. 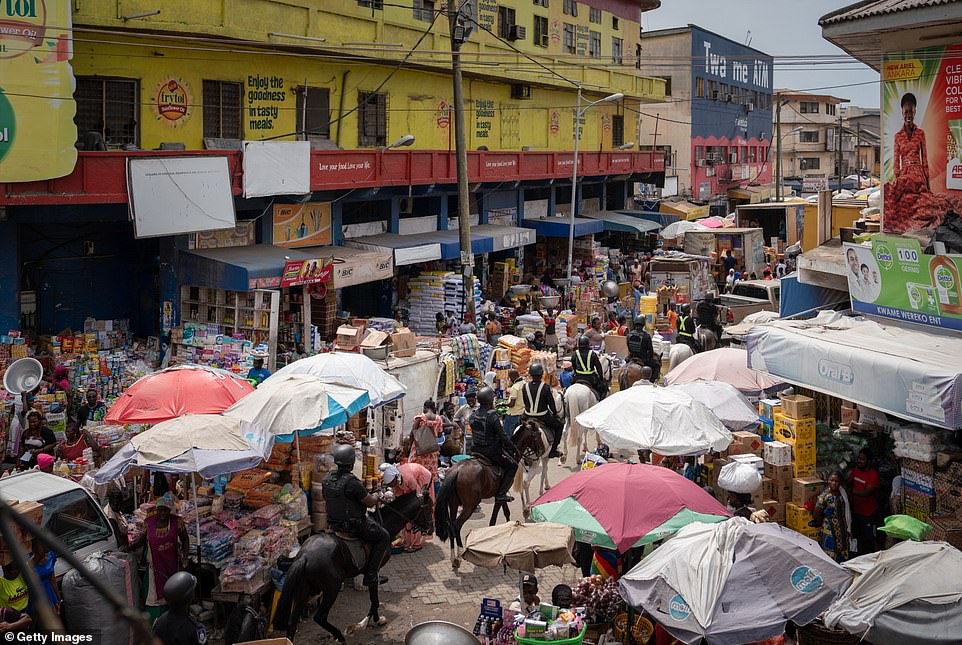 The streets of Ghana are being flooded with the secondhand garments 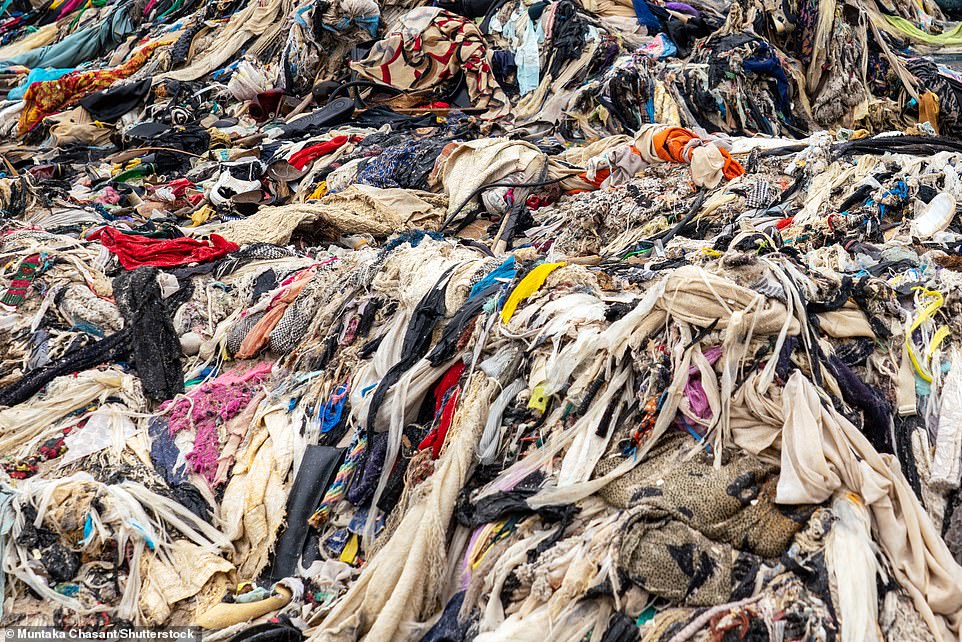 H&M, a major offender in the industry, produces three billion garments a year alone and only recycles about 10 percent of them – the rest is shipped to places like Accra 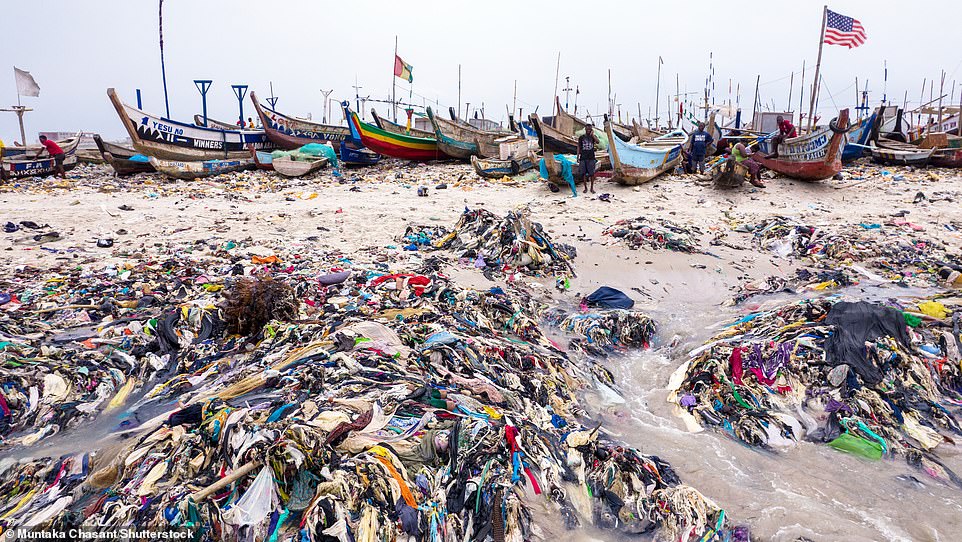 Dozens of African countries had hope the import of what Gahanna refers to as obroni wawu, or dead White people’s clothes

More than 100 billion garments are produced worldwide each year and 85 percent of them are either tossed into a landfill or incinerated.

The average American reportedly throws away 70 pounds of clothing and other textiles each year.

H&M became the first global fashion retailer to launch a garment collecting program in all its stores across the globe in 2013.

The company setup recycling boxes for customers to drop off their clothes – regardless of the brand.

Since starting the program, H&M has collected more than 141,000 tons, more than three million pounds, of textiles global. 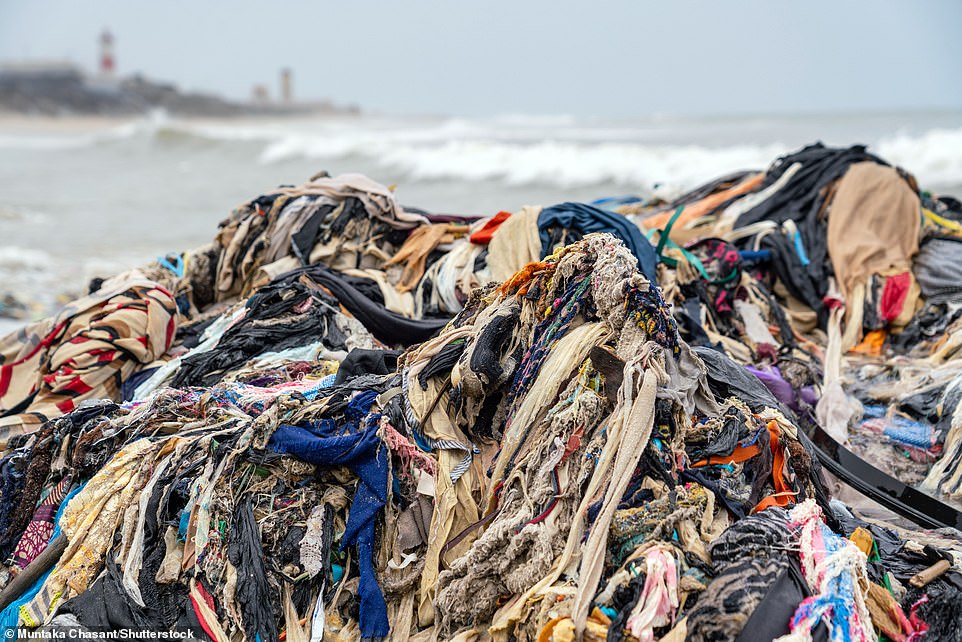 The influx of cheap clothing is also hurting the domestic textile industry in Africa, as these companies cannot compete in price.

‘But now there’s this new form of colonialism… they want to bring their products this way, so they cannot allow us [to make our own].’

A ban on the import of clothes was petitioned by several members of the East Africa Community (EAC) in 2015 – the group had hoped to put a stop to the mayhem by 2019.

According to The Stern Opportunity, the group was ‘bullied’ into retracting their petition by the US that allegedly said it would take back initiatives in the African Growth and Opportunity Act.

This act is a trading program that gives countries in sub-Saharan Africa preferential access to U.S. markets, allowing them to export products tariff-free.

The reason for the US pushing back is if they lost the ability to export clothing, at least 40,000 jobs in America would be eliminated and 150,000 not-for-profit jobs would be ‘negatively impacted.

However, the US is likely more worried that fast fashion companies might leave the US because they would not be able to ship to developing countries.

And in the past five years, the nation’s worn clothing industry sits at a $662 million yearly value.