Major glaciers in the Dolomites, Yosemite, Yellowstone and Kilimanjaro will DISAPPEAR by 2050 due to global warming, report warns

Some of the world’s most famous glaciers will disappear by 2050 due to global warming, whatever the temperature rise scenario, according to a UNESCO report.

This includes the Dolomites in Italy, the Yosemite and Yellowstone parks in the United States and Mount Kilimanjaro in Tanzania.

UNESCO monitors some 18,600 glaciers across 50 of its World Heritage sites and said that a third of those are set to disappear by 2050.

While the rest can be saved by keeping global temperature rise below 1.5°C (2.7°F) relative to pre-industrial levels, in a business-as-usual emissions scenario, about 50 per cent of these World Heritage glaciers could almost entirely disappear by 2100. 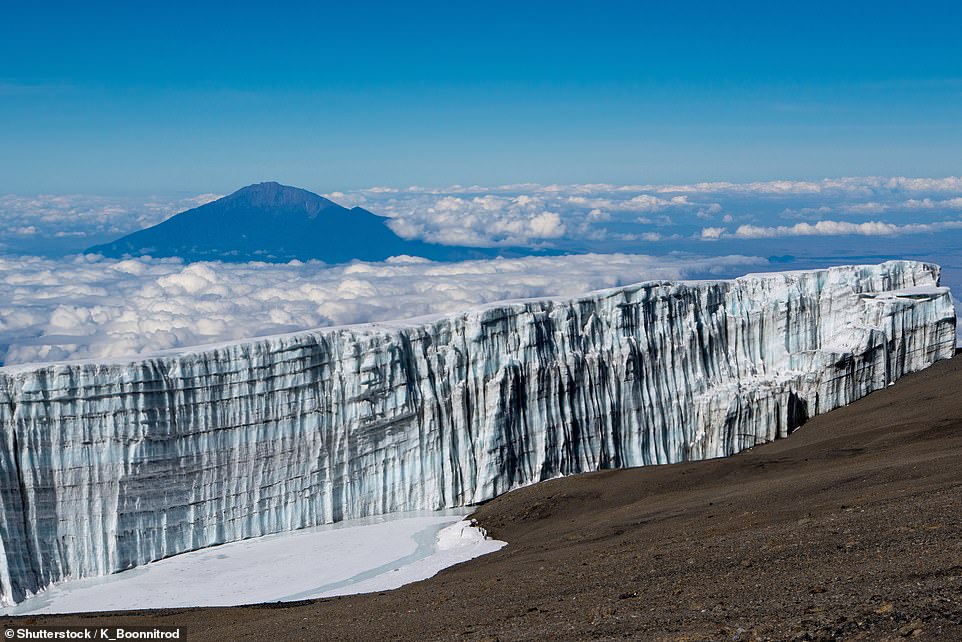 Some of the world’s most famous glaciers will disappear by 2050 due to global warming, whatever the temperature rise scenario, according to a UNESCO report. Pictured: the glacier at the top of Mount Kilimanjaro 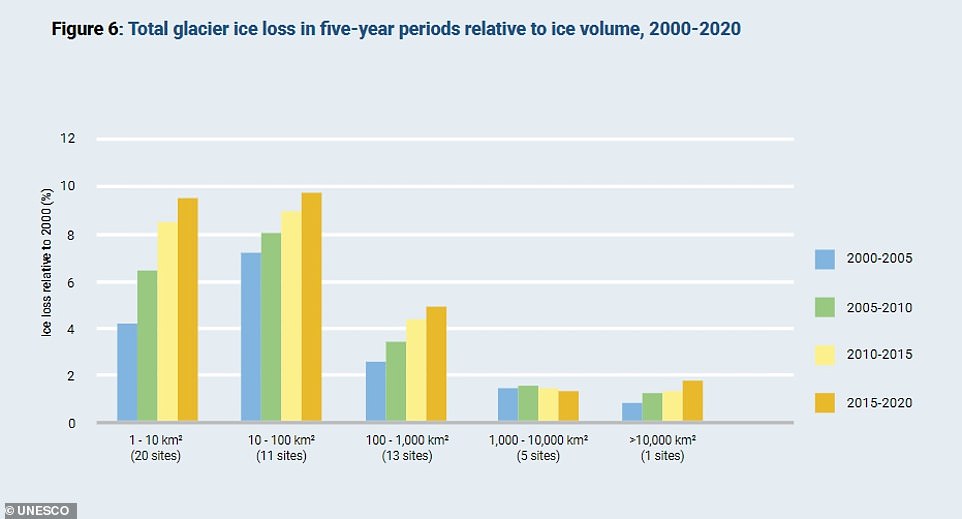 UNESCO monitors some 18,600 glaciers across 50 of its World Heritage sites and said that a third of those are set to disappear by 2050

Which glaciers are at risk?

The 50 World Heritage sites in the report are home to about 10 per cent of the Earth’s glaciers.

But the report warns that these glaciers have been retreating at an accelerated rate since 2000 due to carbon dioxide (CO2) emissions, which are warming temperatures.

Together, the glaciers are losing 58 billion tons of ice every year – the equivalent of the combined annual water use of France and Spain.

What’s more, they are responsible for nearly five per cent of observed global sea-level rise.

Worryingly, the report concludes that glaciers in a third of the 50 sites will disappear by 2050 – regardless of efforts to limit temperature increases.

In Africa, this includes all glaciers in World Heritage sites, including Kilimanjaro National Park and Mount Kenya.

In Asia, glaciers in Three Parallel Rivers of Yunnan Protected Areas and those in Western Tian-Shan are at risk.

And in Europe, glaciers in Pyrenees Mont Perdu and The Dolomites are very likely to disappear by 2050.

But there is hope.

UNESCO says it’s still possible to save the glaciers in the remaining two thirds of sites, if global temperature rise is kept below 1.5°C (2.7°F).

Audrey Azoulay, UNESCO’s Director-General, said: ‘This report is a call to action.

‘Only a rapid reduction in our CO2 emissions levels can save glaciers and the exceptional biodiversity that depends on them.

‘COP27 will have a crucial role to help find solutions to this issue.

‘UNESCO is determined to support states in pursuing this goal.’

Alongside reducing carbon emissions, UNESCO is calling for the creation of an international fund to monitor and preserve glaciers.

This fund could be used to implement early warning and disaster risk reduction measures.

According to UNESCO, half of the world’s population depends on glaciers as their water source, either directly or indirectly.

It adds that glaciers are also ‘pillars of biodiversity’ and feed into many ecosystems.

‘When glaciers melt rapidly, millions of people face water scarcity and the increased risk of natural disasters such as flooding, and millions more may be displaced by the resulting rise in sea levels,’ said IUCN Director General Dr Bruno Oberle.

‘This study highlights the urgent need to cut greenhouse gas emissions and invest in Nature-based Solutions, which can help mitigate climate change and allow people to better adapt to its impacts.’ 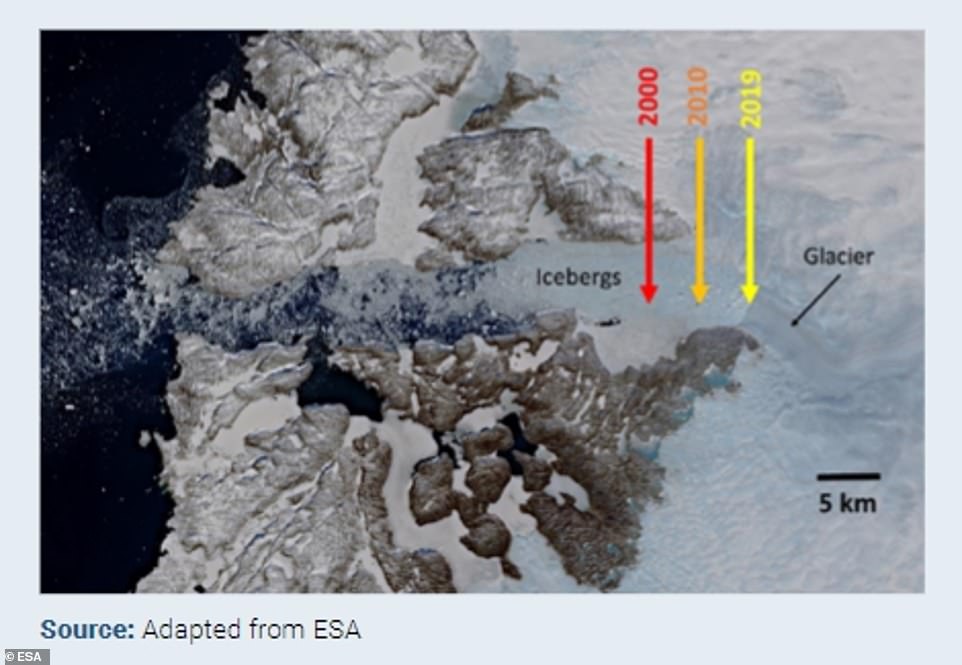 Copernicus Sentinel-2 image from 2019 of the Jakobshavn Isbrae Glacier in Ilulissat Icefjord in Denmark. The red arrow shows the glacier’s terminus position in 2000, the orange arrow the 2010 position and the yellow arros the 2019 position 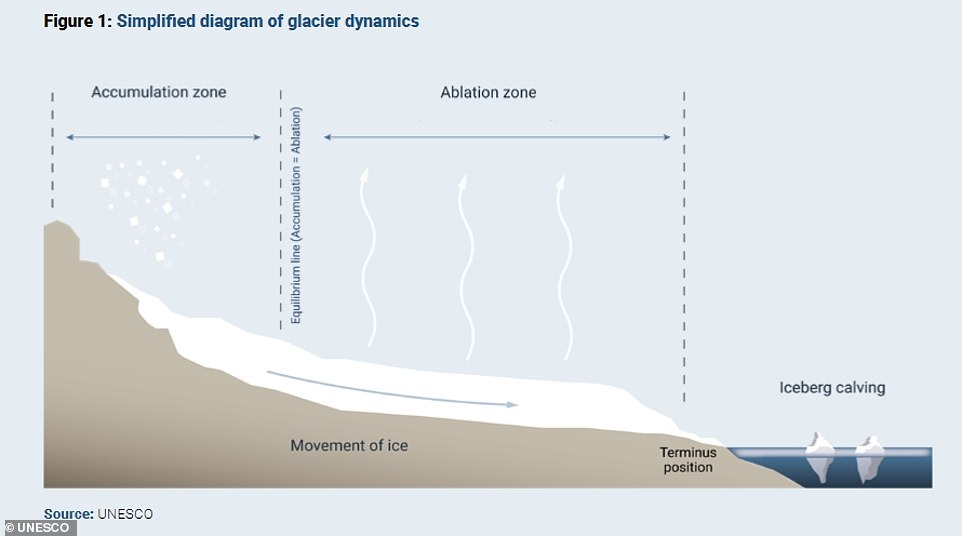 Worryingly, the report concludes that glaciers in a third of the 50 sites will disappear by 2050 – regardless of efforts to limit temperature increases. Pictured: a simplified diagram of glacier dynamics

UNESCO’s report comes shortly after the World Meteorological Organization’s ‘State of the Climate in Europe’ report warned that temperatures in Europe have increased by more than twice the global average over the past 30 years.

This rise of about 1.3°F (0.5°C) per decade is the largest of any continent in the world, and has contributed to melting ice sheets and rising sea levels.

WMO Secretary-General Professor Petteri Taalas said: ‘Europe presents a live picture of a warming world and reminds us that even well prepared societies are not safe from impacts of extreme weather events.

‘This year, like 2021, large parts of Europe have been affected by extensive heatwaves and drought, fuelling wildfires.

The three ice sheets that cover the continent contain around 70 per cent of our planet’s fresh water – and these are all to warming air and oceans.

If all the ice sheets were to melt due to global warming, Antarctica would raise global sea levels by at least 183ft (56m).

Given their size, even small losses in the ice sheets could have global consequences.

In addition to rising sea levels, meltwater would slow down the world’s ocean circulation, while changing wind belts may affect the climate in the southern hemisphere.

In February 2018, Nasa revealed El Niño events cause the Antarctic ice shelf to melt by up to ten inches (25 centimetres) every year.

El Niño and La Niña are separate events that alter the water temperature of the Pacific ocean.

In March 2018, it was revealed that more of a giant France-sized glacier in Antarctica is floating on the ocean than previously thought.

This has raised fears it could melt faster as the climate warms and have a dramatic impact on rising sea-levels.