Not so bird-brained after all! Clever Eurasian jays pass the famous ‘marshmallow test’ by choosing to wait for a mealworm later rather than eat a piece of bread immediately

They say the early bird gets the worm, but it turns out Eurasian jays are willing to wait to get a better one.

A study has found that jays can pass the famous ‘marshmallow test’ by resisting temptation to get a delayed, but better food reward.

Researchers from the University of Cambridge presented 10 birds with bread and cheese, both immediately available, and a mealworm on display behind a perspex screen.

Mealworms are a common favourite of the jays, and the screen was lowered to allow them to take the snack after a time delay.

All the birds in the experiment quickly learned it was better to wait for the worm, but some could wait much longer than others, and they also scored higher in intelligence tests.

‘It’s just mind-boggling that some jays can wait so long for their favourite food,’ said Dr Alex Schnell, the study’s first author. 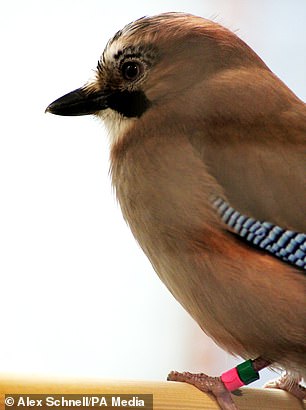 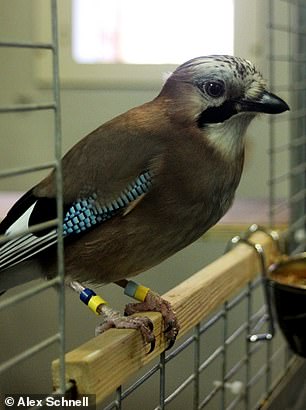 Top of the class was ‘JayLo’ (left), who ignored a piece of cheese and waited five-and-a-half minutes for a mealworm. One of the worst performers, ‘Homer’ (right), could only wait a maximum of 20 seconds for a better snack

WHAT IS THE MARSHMALLOW TEST?

The original marshmallow test was conducted by researchers led by Professor Walter Mischel, then at Stanford University, in the 1960s.

It is regarded as one of the most successful behavioural experiments.

He put a marshmallow in front of children aged three to five and said they could eat it when he left the room.

But if they could wait for 20 minutes to have it, he said he would give them a second marshmallow.

He found that around a third of his subjects would grab the sweet immediately, a third would wait for his return to claim two marshmallows and the rest would try to wait but give up at varying times.

It wasn’t until 14 years later, when his earliest subjects were leaving school, that the psychologist began to confirm a correlation between the test results and success in life.

The children who took the sweet straight away turned into teenagers who lacked self-esteem and experienced difficult relations with their peers, it was found.

Those who waited for a second marshmallow turned out to be more socially competent, self-assertive and academically successful.

The boys and girls who waited even scored an average of 210 points more in their school exams than those who didn’t.

Jays are members of the corvid family, often nicknamed the ‘feathered apes’ because they rival non-human primates in their cognitive abilities.

Corvids hide their food to save it for later, delaying immediate gratification to plan for future meals.

Jays are also particularly vulnerable to having their caches of food stolen by other birds, and this self-control enables them to wait for the right moment to hide it without being seen or heard.

The researchers think these factors may have driven the evolution of self-control in these birds.

To investigate its extent, they designed an experiment, published in Philosophical Transactions of the Royal Society B, inspired by the 1972 Stanford ‘Marshmallow test’.

In this, children were offered a choice between one marshmallow immediately or two if they waited for a period of time, with the cleverest kids choosing to wait.

For the jays, this involved deciding whether to eat bread and cheese straight away, or to wait for the mealworm.

While mealworms are known to be favourite, bread and cheese come second, although individuals vary in their preference for one over the other.

A range of delay times were tested before the mealworm was made available, if the bird had resisted the temptation to eat the bread or cheese.

These ranged from five seconds to five-and-a-half minutes and, while all the birds chose to wait for the worm, the lengths of time they did varied between individuals.

Top of the class was JayLo, who ignored a piece of cheese and waited five-and-a-half minutes for a mealworm.

Dr Schnell said: ‘In multiple trials, I sat there watching JayLo ignore a piece of cheese for over five minutes – I was getting bored, but she was just patiently waiting for the worm.’

The worst performers, Dolci and Homer, could only wait a maximum of 20 seconds.

The jays looked away from the bread or cheese when it was presented to them, as if to distract themselves from temptation.

Similar behaviour has been seen in chimpanzees and human children.

The researchers also presented the jays with five cognitive tasks that are commonly used to measure general intelligence.

The birds that performed better in these tasks also managed to wait longer for the mealworm reward, suggesting that self-control is linked to intelligence in jays.

‘The birds’ performance varied across individuals – some did really well in all the tasks and others were mediocre,’ said Dr Schnell.

‘What was most interesting was that if a bird was good at one of the tasks, it was good at all of them – which suggests that a general intelligence factor underlies their performance.’ 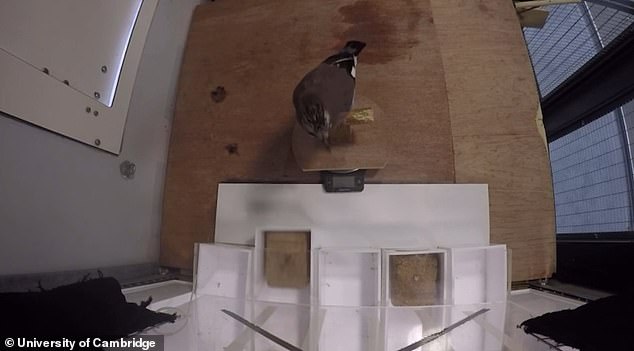 Researchers from the University of Cambridge presented 10 birds with bread and cheese, both immediately available, and a mealworm on display behind a perspex screen. Pictured: JayLo ignores the cheese in the right box, and waits for the worm in the left box – which only becomes available after a delay

A similar link between intelligence and self-control has been observed in children taking the marshmallow test.

In a third experiment, the jays were presented with cheese or bread along with the worm, where the latter was visible but always out of reach.

The jays always ate the immediately available bread or cheese, but the length of time they waited first varied depending on which one they were presented with.

They held out for less time if they were offered their preferred snack out of bread or cheese, showing that they only delay gratification when it is warranted.

The authors of the report said this is the first evidence of a link between self-control and intelligence in birds.

It has previously been shown in humans and chimpanzees – animals that form social bonds – but these results show it also persists across distantly related animal groups.

Researchers at the University of Cambridge performed three variations of magic tricks on six Eurasian jays (Garrulus glandarius), as well as 80 human volunteers.

Overall, the bird species was better able to suss two of the three tricks than humans were, the experts found – although humans and jays performed about the same on the third trick.

Until this study, little had been known about how non-human animals perceive ‘intricate techniques of deception’ involved in magic tricks, the authors say.

They believe studying animal reactions to tricks can unlock secrets about how their brains function.