Giant 15-foot-tall T-rex skeleton weighing more than 3,000 pounds discovered in the United States is heading to auction in Hong Kong: Experts slam the big-money bone trade as ‘harmful to science’

Paleontologists are condemning the big-money bone trade once again, as a 15-foot-tall Tyrannosaurus rex skeleton is set to be sold at auction to the highest bidder in Hong Kong next month;.

The dinosaur, initially unearthed in the US, went on display at the Victoria Theatre & Concert Hall in Singapore Friday ahead of the sale that does not yet have an estimate bid, according to Christie’s Asia Pacific.

The T-rex, which weighs more than 3,000 pounds, is part of the new trend for prehistoric auction lots that has some experts concerned about the damages being done to science – once the remains are scooped up by a private owner they are forever lost to science.

Thomas Carr, a paleontologist from the US, described such sales as being ‘unquestionably harmful to science’ even if the skeletons had been studied before being sold.

‘A secure, permanent collection ensures that the observations that a scientist makes of a fossil can be tested and replicated -and a commercially held fossil has no such assurance,’ Carr said.

These sales were typically bankrolled by museums that would either purchase the specimens outright or send a collector to do their bidding for them but in recent years, the artifacts have become valued as pieces of art for the rich and museums cannot compete with the high prices. 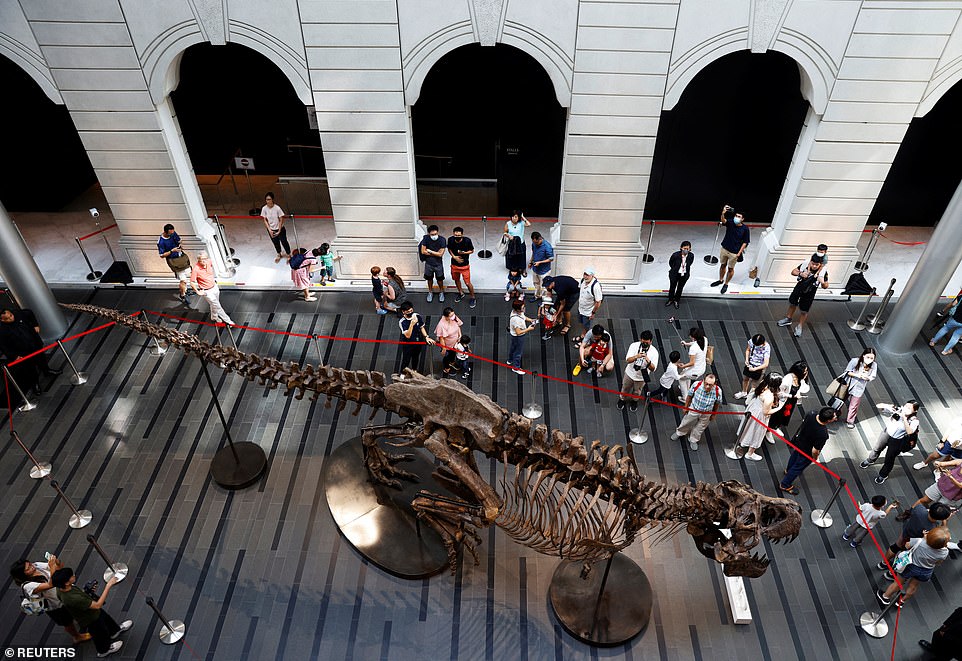 A massive 15-foot-tall T-rex went on display in Singapore Friday. It will spend three days at the Victoria Theatre & Concert Hall and then head to Hong Kong where it will be sold off to the highest bidder 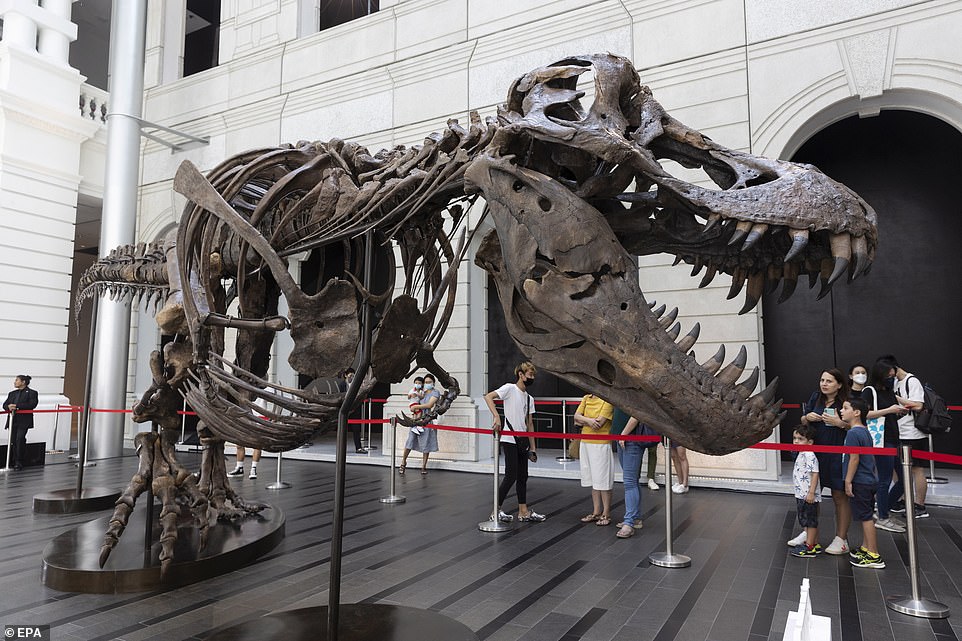 The adult male dinosaur, which measures 12 feet long and weighs 3,086 pounds, was excavated from private land in the Hells Creek Formation in Montana in the United States in 2020 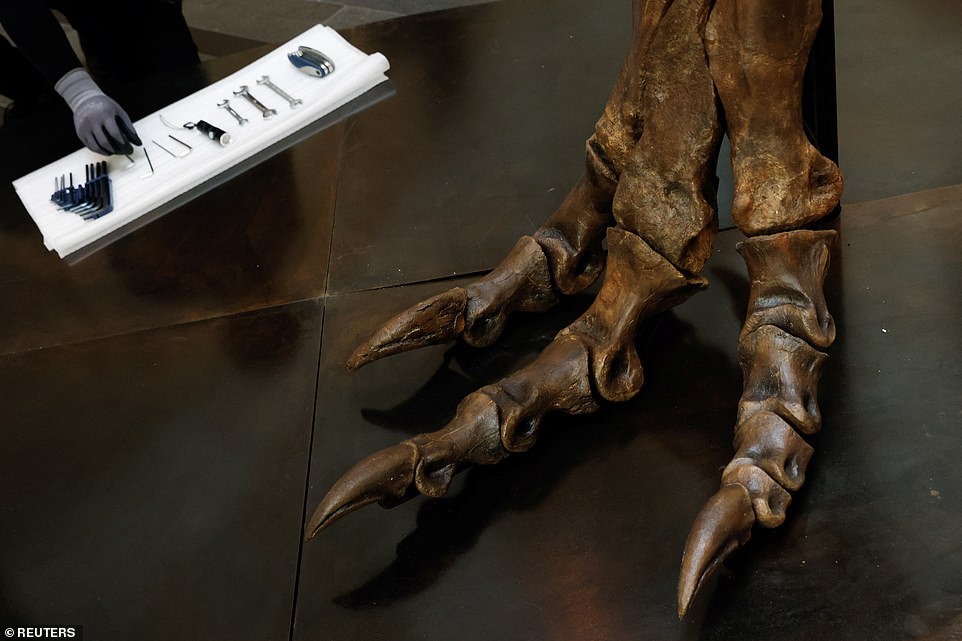 Approximately 80 bones are the original and the rest was reconstructed. Crew members worked for days assembling the massive creature that is now on display

The T-rex, named ‘Shen’, the Chinese word for god, is composed of 80 original bones – the missing bones were reconstructed.

The adult male dinosaur, which measures 12 feet long and weighs 3,086 pounds, was excavated from private land in the Hells Creek Formation in Montana in the United States in 2020.

And it is believed to have lived 66 million to 68 million years ago.

The massive skeleton is currently on display in Singapore where thousands of people are visiting to snap images of the prehistoric beast. 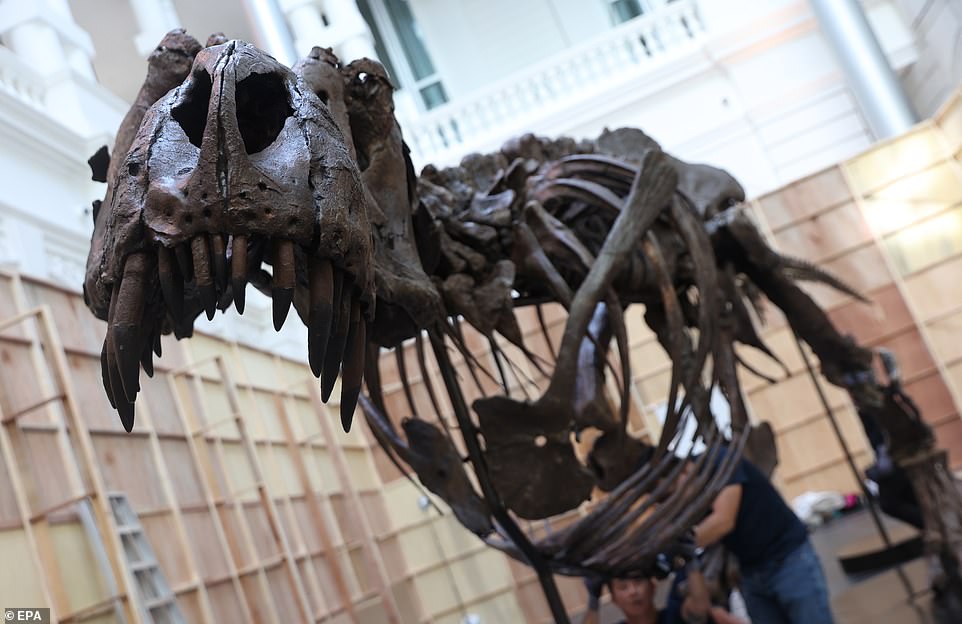 The display in Singapore is part of a pre-auction display. Picture is the dinosaur while it was being assembled 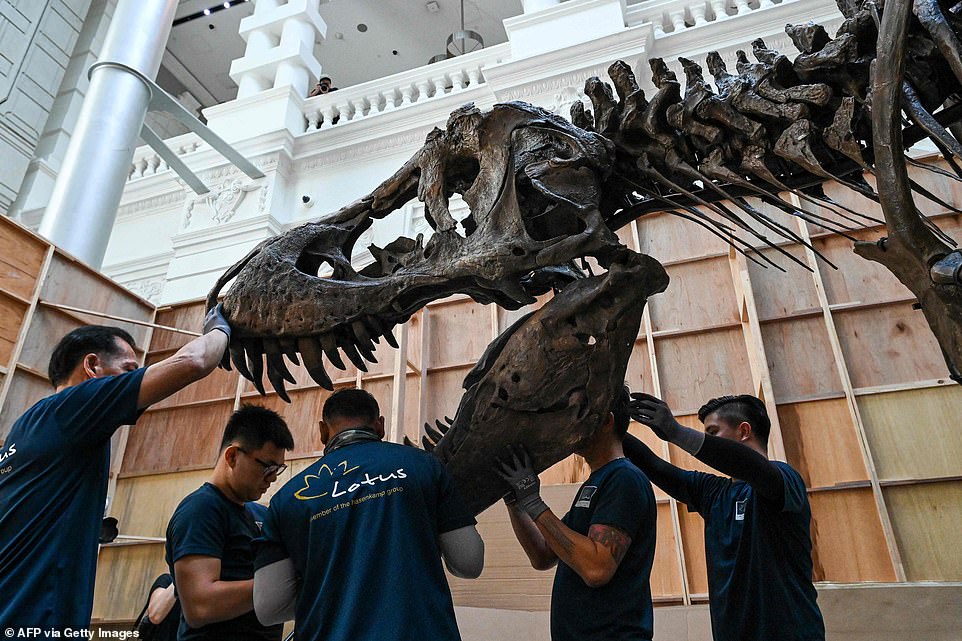 The T-rex, which weighs more than 3,000 pounds, is part of the new trend for prehistoric auction lots that has some experts concerned about the damages being done to science 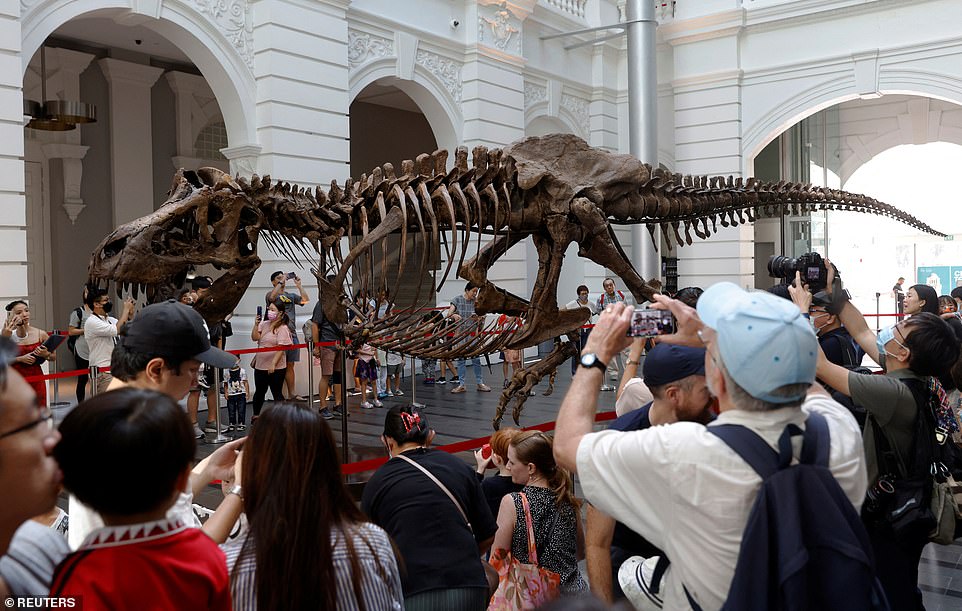 2. Deinonychus nicknamed Hector: Sold at New York Christie’s for $12.4 million in May 2022

‘I’ve never seen a real-life fossil before… It makes me feel in awe because it’s quite majestic,’ said Lauren Lim, 33, who went to view the exhibit.

Dinosaur enthusiast Richard Chan, 37, said he was reliving his childhood.

‘I collect a lot of Jurassic Park T-Rex figurines so it’s really cool to see an actual one,’ said Chan.

When Shen is sold, it will be the first auction of a T-Rex fossil in Asia, according to Christie’s.

While spectators are thrilled to see the dinosaur, paleontologists are mourning its journey through Asia.

Steve Brusatte, a paleontologist at the University of Edinburgh, told AFP: ‘It’s a sad thing that dinosaurs are becoming collectible toys for the oligarch class, and I can only hope this fad ends soon.’

Francis Belin, president at Christie’s Asia Pacific, said they hoped that exceptional objects ended up in institutions so they could be seen by the public.

A guide price was not provided for Shen, nor the identity of the seller, but Belin said a previous T-Rex skeleton ‘Stan’ fetched $31.8 million at a sale in New York in 2020.

Shen’s upcoming sale brings up memories of another dinosaur auction that made headlines over the summer – the $6.1 million sale of a 10-foot-tall Gorgosaurus skeleton at Sotheby’s auction house in New York.

Paleontologists also sounded the alarm about how the loss hurts the scientific community.

Speaking with DailyMail.com in August, Carr said: ‘[Sales like this] are like the last copy of a book being thrown into the fire – when the skeleton was purchased by a private collector, it no longer exists to scientists anymore. Image all we know about humanity is just you and me. Clearly, that is not enough information to know about everyone.’ 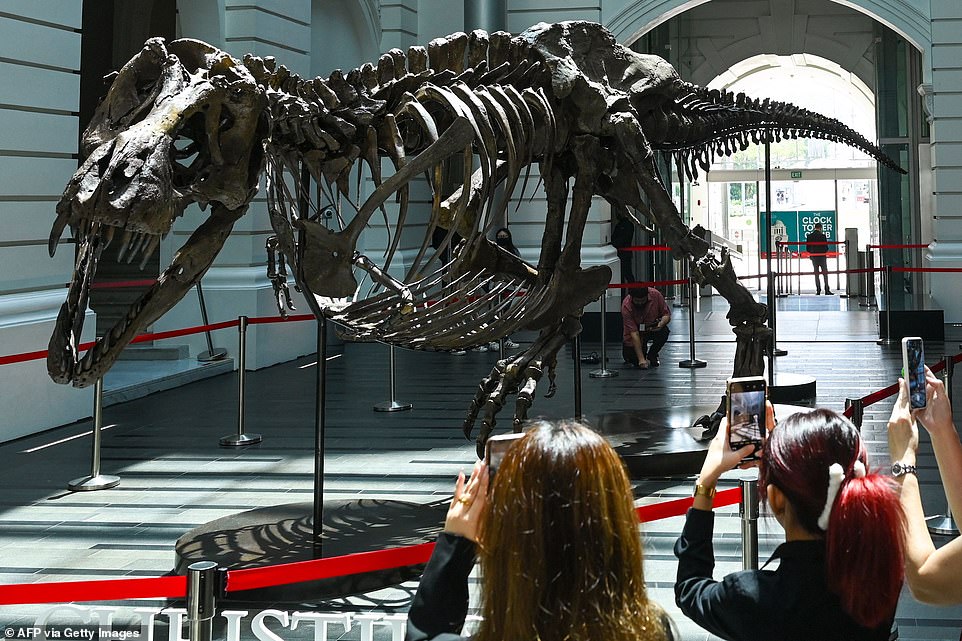 While spectators are thrilled to see the dinosaur, paleontologists are mourning its journey through Asia 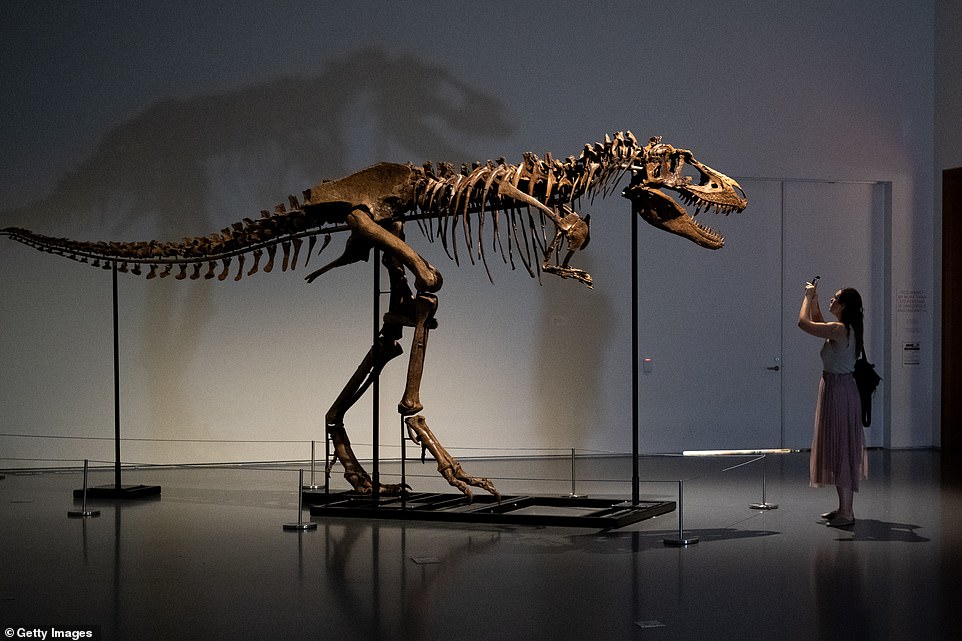 The T-rex’s upcoming sale brings up memories of another dinosaur auction that made headlines over the summer – the $6.1 million sale of a 10-foot-tall Gorgosaurus skeleton (pictured) at Sotheby’s auction house in New York

Carr said dinosaur fossils need to be placed somewhere, such as the Museum of Natural History in New York City, that is accessible to the scientific community, experts say, otherwise they are deemed lost to the world.

Auction houses, however, say there is no evidence that sales to private collectors hurts science.

Sotheby’s Senior Vice President Cassandra Hatton told DailyMail.com: ‘The great museums of the world all began as private collections, and indeed the very concept of a museum was born from the early modern tradition of cabinets of curiosity.

‘These specimens have survived for millions of years, and will be around for millions more; while there is a chance they may not be available for study immediately following the sale, they surely will be at some point in the future.

‘Private collectors and research institutions can benefit from each other in ways that are essential to the long-term preservation of fossil specimens and to raise awareness, as well as educate the public about dinosaurs.’

SUE: THE T. REX THAT STARTED IT ALL

The market for dinosaur bones heated up after a T. rex nicknamed Sue sold at auction for $8.4 million in 1997. It was the first ever dinosaur to be showcased at Sotheby’s.

Although Sue was purchased by the Chicago-based Field Museum, the hefty price tag opened the floodgates for auction and was enough to encourage the public to search for fossilized remains and sell them for top dollar amounts.

Sue was found on August 12, 1990 on the Cheyenne River Sioux reservation in South Dakota that was owned by Maurice Williams.

Larson paid Williams $5,000 to take the T. rex, but Larson began to receive sizable offers for the T.rex shortly after it was pulled from the ground. After hearing this, Williams said he gave the scientists permission to search the property, but not take anything they found.

Federal agents seized Sue in 1992 on the grounds that government permission had not been granted for the removal of the fossil from federal lands and a year later, Sue was given to Williams who brought it to auction.

Sue was put up for sale in Sotheby’s art auction in 1997 and nine bidders went head-to-head for the dinosaur. And after eight minutes, it was Chicago’s Field Museum of Natural History that won. 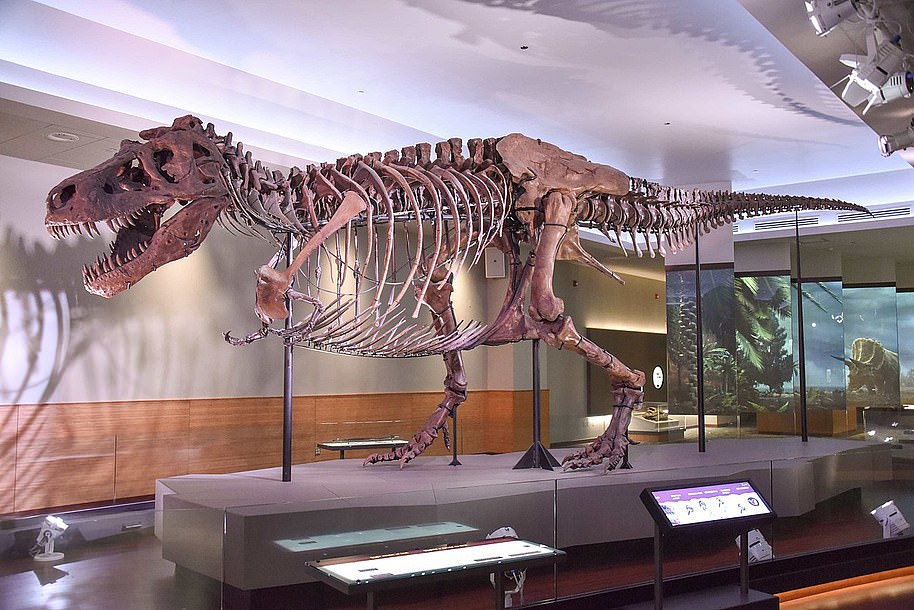 Auctioning of dinosaurs began when Sue (pictured), a T.rex, was sold for $8.4 million. Although it was obtained by a museum, the big dollar sign encouraged the public to find prehistoric remains and sell them to the highest bidder

BIG JOHN: THE MOST EXPENSIVE TRICERATOPS EVER SOLD

Discovered by Walter Stein in 2014 when he was exploring a ranch in Perkins County, South Dakota, this specimen was sent to an auction house in France where it was bought for a whopping $7.7 million to an anonymous private collector from the U.S.

The massive skeleton is 60 percent complete. Its skull is 75 percent intact.

Big John is one of more than 100 known triceratops fossils, which is one of the most commonly found in North America. This specimen was also found to have a wound on its frill, the area around the neck, that was likely made by a rival dinosaur’s horn.

Before the auction, Big John was taken to Italy, where study co-researcher Flavio Bacchia, of the fossil restoration company Zoic, prepared the specimen. 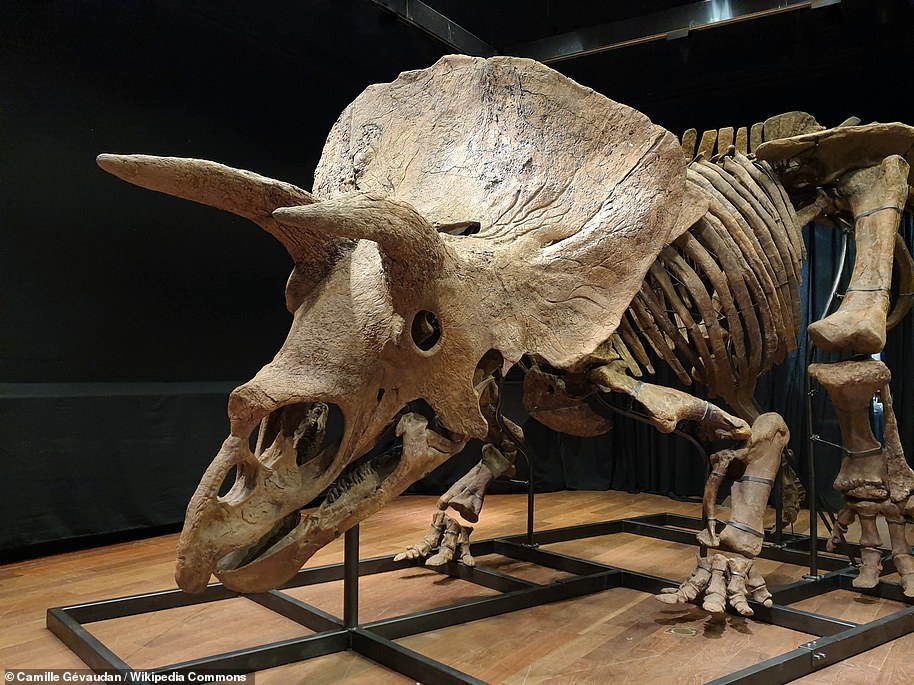 Big John was found by Walter Stein in 2014 while he was exploring a ranch in Perkins County, South Dakota. This specimen was also sent to an auction house in France where it was bought for a whopping $7.7 million to an anonymous private collector from the US. No one knows where Big John is to this day

STAN: A RECORD-BREAKING $31.8MILLION SALE  – BEFORE REAPPEARING IN THE U.A.E

Stan was discovered in South Dakota in 1987 and named after the amateur paleontologist who came across the remains, Stan Sacrison.

The remains were initially thought to be of a triceratops, but a further analysis in 1992 showed its true identity as a T.rex.

The skeleton includes 188 bones, making it 70 percent complete. However, its skull is the most complete and preserved found to date.

The skeleton vanished from the public eye when an anonymous bidder paid the record-breaking amount.

Nearly two years later it was found that Stan traveled from New York to Abu Dhabi where it resides at a new natural history museum in the United Arab Emirates. 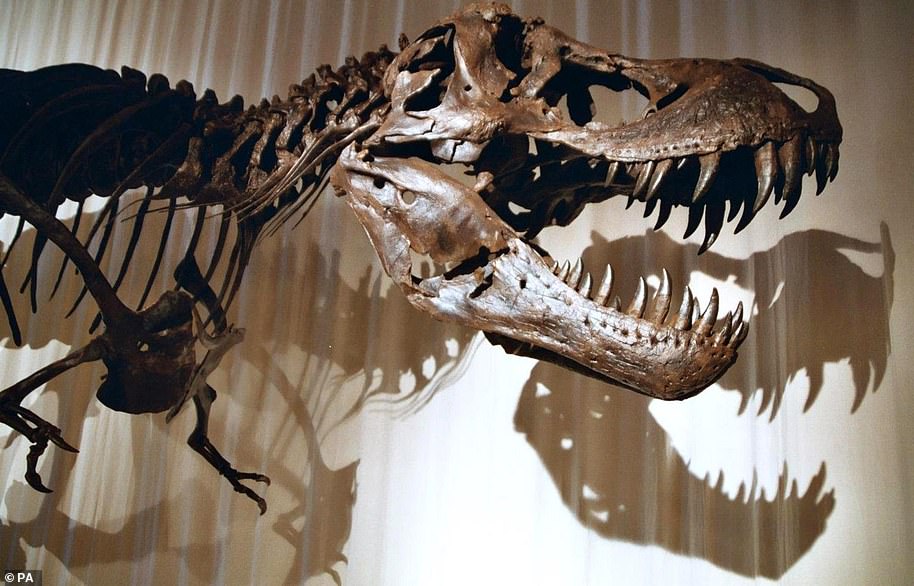 Stan, another T.rex, was sold for $3.18 million in 2007. One and a half years later it was found that Stan traveled from New York to Abu Dhabi where it resides at a new natural history museum in the United Arab Emirates for all to marvel at its wonders. Stan’s happy ending, however, is not typical of a lot of dinosaur remains discovered in US soil