How does YOUR city stack up? Experts reveal the UK cities benefiting the most from 5G – with Glasgow, Cardiff and Sheffield topping the list

It was touted as one of the next big digital revolutions when it launched in the UK back in 2019.

But three years later, how many Britons are actually benefiting from 5G?

New research by Uswitch has revealed the proportion of people in UK cities that regularly use the service, and those that rarely connect.

The results show that Glasgow, Cardiff and Sheffield have the highest proportion of people using 5G, while people in Brighton, Norwich and Southampton still rely on older connections. 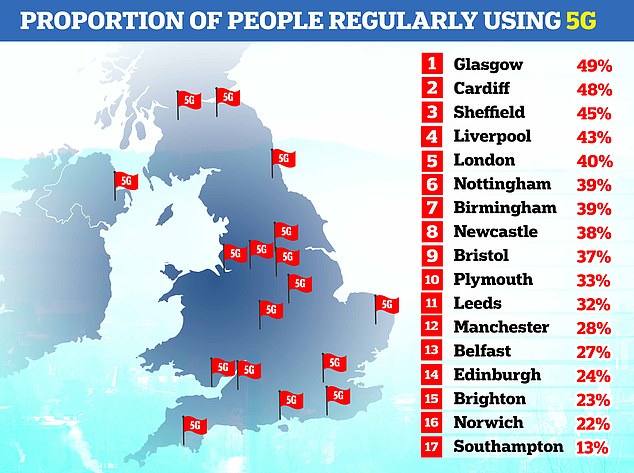 Glasgow, Cardiff and Sheffield have the highest proportion of people using 5G, while people in Brighton, Norwich and Southampton still rely on older connections 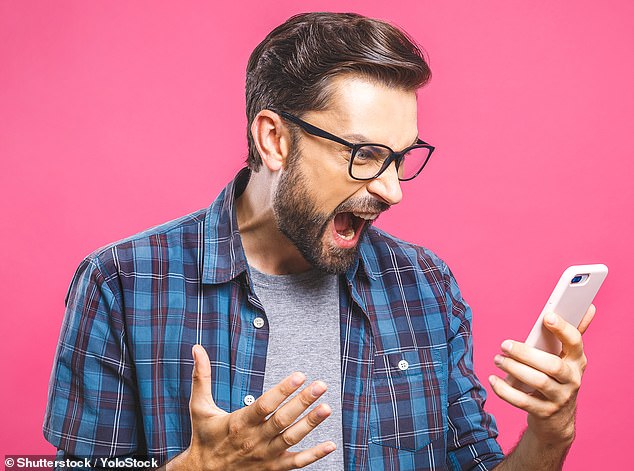 New research by Uswitch has revealed the proportion of people in UK cities that regularly use the service, and those that rarely connect (stock image)

5G is a next-generation network technology developed to replace 4G as the main way we access the internet on our smartphones.

On paper, 5G can deliver a top speed of 20Gbps, allowing you to download a 25GB UltraHD movie in seconds.

But research from Uswitch.com has found that one in six mobile users feel the power of 5G technology had been overstated.

In a survey of 2,000 UK adults, the site found that less than half said they had seen noticeable speed or reliability improvements since upgrading.

The study also noted a connectivity divide between urban and rural areas.

Seventeen per cent of those in the countryside said they had never been able to connect to a 5G network – three times as many as those in cities.

It found that some parts of the UK were struggling for signal beyond just 5G – in Yorkshire, only 48 per cent of residents said they receive a reliable 4G service, and 14 per cent said they often had to use a 2G network, which dates back to the 1990s.

Mobile networks have begun announcing plans to phase out their older networks in order to free up space for more 4G and 5G services in the years to come.

Ernest Doku, telecoms expert at Uswitch.com, said it was important to note that 5G had only begun being introduced in the last three years, and therefore needed more time to reshape the country’s connectivity landscape.

‘After the promise of 5G delivering ultrafast speeds to our mobiles, it’s no wonder that many consumers still don’t understand what the fuss is about when compared to their everyday experiences,’ he said.

‘But it’s important to remember 5G was first trialled in the UK just three years ago, so this technology is really still in its infancy.

‘We’re still only scratching the surface of what it can do.

‘When the technology reaches its potential – and more importantly is readily available to all – it won’t just change the speed of our mobile data, but how we live our lives.

‘With multiple concurrent users in the home becoming commonplace due to our new hybrid normal, and the rise of plug-and-play mobile broadband as a viable alternative to fixed line services, 5G could well play a pivotal role in connecting our homes in ways we may have never imagined.’

EXPLAINED: THE EVOLUTION OF MOBILE BROADBAND UP TO 5G

The evolution of the G system started in 1980 with the invention of the mobile phone which allowed for analogue data to be transmitted via phone calls.

Digital came into play in 1991 with 2G and SMS and MMS capabilities were launched.

Since then, the capabilities and carrying capacity for the mobile network has increased massively.

More data can be transferred from one point to another via the mobile network quicker than ever.

5G is expected to be 100 times faster than the currently used 4G.

Whilst the jump from 3G to 4G was most beneficial for mobile browsing and working, the step to 5G will be so fast they become almost real-time.

That means mobile operations will be just as fast as office-based internet connections.

Potential uses for 5g include:

5G is expected to be so quick and efficient it is possible it could start the end of wired connections.

By the end of 2020, industry estimates claim 50 billion devices will be connected to 5G.

The evolution of from 1G to 5G. The predicted speed of 5G is more than 1Gbps – 1,000 times greater than the existing speed of 4G and could be implemented in laptops of the future