Harvard neuroscientist is condemned for stitching infant monkeys’ eyes shut to study vision disorders: Public calls for university to close the lab due to ‘unethical and cruel’ practices

A Harvard neuroscientist has been condemned by the public for research that involved ripping newborn monkeys from their mothers and stitching their eyelids shut in the name of studying vision disorders.

The work, conducted in 2016 and 2020, was part of Margaret Livingstone’s work that she said builds on Nobel Prize winning science, which ‘helped save millions of children from vision loss.’

Scientists, animal rights activates and the public are calling the practices ‘unethical and cruel’ and are demanding Livingstone’s studies to be removed from accredited journals and lab at Harvard University close.

Livingstone declined to comment on the matter when asked by DailyMail.com, but shared a public statement where she denounces the attacks, highlighting that her lab has ‘not performed eyelid closures since the two isolated cases in 2016’ – she also states that the method ‘remains routine protocol across research labs that study vision disorders.’

University of St. Andrews primatologist Catherine Hobaiter, who told Science.org that she is horrified by the methods, sent a letter to the Proceedings of the National Academy of Sciences (PNAS) signed by more than 250 animal behavior researchers, grad students, and postdocs, asking it to retract Livingstone’s most recent publication titled ‘Triggers for mother love.’ 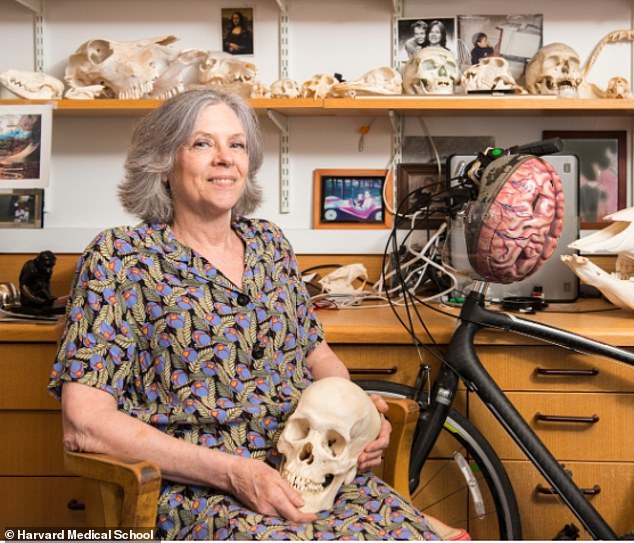 The work, conducted in 2016 and 2020, was part of Margaret Livingstone’s work that she said builds on Nobel Prize winning science, which ‘helped save millions of children from vision loss’

However, this work involved stitching close the eyelids of newborn monkeys for a year, which were also taken from their mothers immediately after birth

The studies brought back memories of the infant monkey Britches that was rescued from the University of California, Riverside in 1985.

The monkey was removed with 700 animals in an overnight raid, but members of the Animal Liberation Front found Britches had a sonar device attached to his head that released a high-pitched screech every few minutes and bandages were wrapped around his eyes.

When the bandages were removed, the animal advocates found his eyes had been sewn shut.

Katherine Roe, a former experimental psychologist who studied brain development in children and who now serves as the chief of science advancement and outreach at PETA, sent letters to Harvard and two NIH agencies.

Roe believes the harm being done to the animals ‘outweighs any potential benefits to human or animal health.’

The letter continues to highlight Livingstone’s methods that include conducting surgeries on infants ‘so that head posts can be affixed to their skulls or eye coils3 and/or multiple intracranial electrode arrays can be implanted.

‘For multiple experiments, their heads are immobilized using helmets, chin straps, and bite bars, and in some experiments the monkeys are killed and dissected.’ 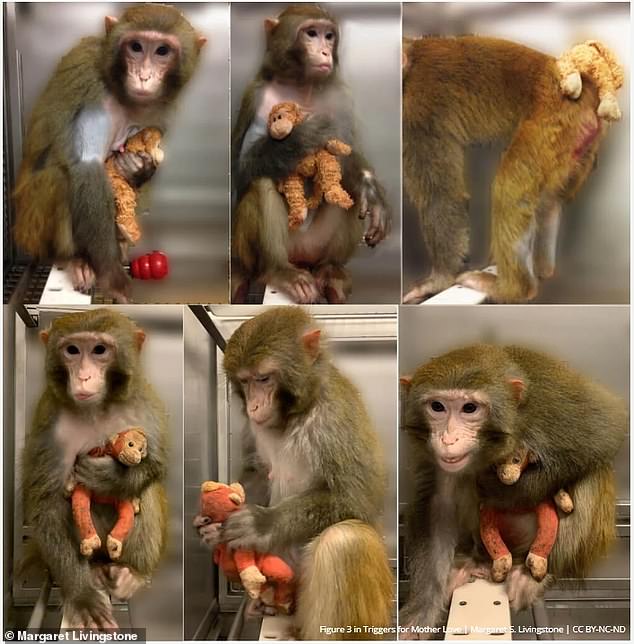 The 2020 study observed how a mother monkey reacts to having her newborn monkey taken away right after birth. Researches give the mother a stuffed monkey, to which they said calmed her down

Twitter users are also in an uproar after hearing the news about the practices, with some  urging Harvard to close Livingston’s lab

In Livingstone’s statement, however, she notes that in 2016 they ‘performed two reversible eyelid-closure procedures in macaques using dissolvable sutures, as described in the peer-reviewed literature.

‘This procedure is also performed in human children and infants with certain eye tumors or to treat invasive eye infections.

‘Pediatric surgeons give these children anesthesia and pain-relief medications.

‘We did the same with our infant macaques to ensure they do not experience pain.’

She also brings up the fact that the 2016 work builds upon Nobel Prize winners science that ‘has been described as a quantum leap in our understanding of how the brain ‘sees.’

Livingstone’s 2019 study ‘Body map proto-organization in newborn macaques’ reads: ‘Two of the hand-reared monkeys (M5 and M6) were raised under conditions of visual form deprivation via eyelid suturing for the first year.

‘Experiments were conducted in these 2 monkeys after eyelid reopening.’

This study and the 2020 paper have also sparked outrage on Twitter, with many users calling for Livingstone’s lab at Harvard to be closed.