Have you ever wondered what the Earth’s magnetic field would sound like? The result may not be music to your ears.

Scientists at the Technical University of Denmark took magnetic signals measured by a European Space Agency (ESA) satellite and converted them into sound.

The result is a rumbling, jangling, crackling noise that wouldn’t be out of place in a horror movie soundtrack.

The researchers used the satellite data in this way to remind listeners about the magnetic field that continues to protect life on Earth from cosmic radiation.

Musician and project supporter Klaus Nielsen said: ‘The team used data from ESA’s Swarm satellites, as well as other sources, and used these magnetic signals to manipulate and control a sonic representation of the core field.

‘The rumbling of Earth’s magnetic field is accompanied by a representation of a geomagnetic storm that resulted from a solar flare on 3 November 2011, and indeed it sounds pretty scary.’ 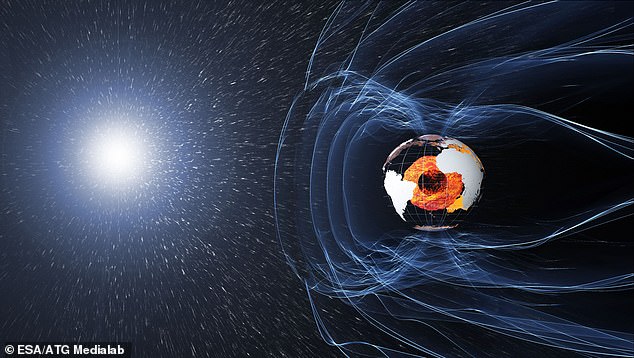 The magnetic field and electric currents in and around Earth generate complex forces that have immeasurable impact on every day life. The field can be thought of as a huge bubble, protecting us from cosmic radiation and charged particles that bombard Earth in solar winds

WHAT IS EARTH’S MAGNETIC FIELD AND HOW DOES IT PROTECT US?

Earth’s magnetic field is a layer of electrical charge that surrounds our planet.

The field protects life on our planet because it deflects charged particles fired from the sun known as ‘solar wind’.

Without this protective layer, these particles would likely strip away the Ozone layer, our only line of defence against harmful UV radiation.

Earth’s magnetic field (blue) is a layer of electrical charge that surrounds our planet. The field protects life on our planet because it deflects charged particles fired from the sun (orange) known as ‘solar wind’ (artist’s impression)

Scientists believe the Earth’s core is responsible for creating its magnetic field.

As molten iron in the Earth’s outer core escapes it creates convection currents.

These currents generate electric currents which create the magnetic field in a natural process known as a geodynamo.

The Earth’s magnetic field is largely generated by the superheated, swirling liquid iron that makes up our planet’s outer core, 1,900 miles (3,000 km) below our feet.

As heat escapes from the inner core, the iron moves around in convection currents, and the motion generates powerful electrical currents.

The rotation of Earth on its axis causes these electric currents to form a magnetic field which extends around the planet and stretches out into space.

As well as allowing compasses to work, the magnetic field protects us from bombardment of cosmic radiation and charged particles carried by solar winds.

The magnetic field can actually attract some of these charged particles, causing them to collide with the atoms in the upper atmosphere, like oxygen and nitrogen.

When they do this, some of the energy in the collisions is transformed into the green-blue light – known as the aurora borealis, or Northern Lights.

This is the only visual representation of the magnetic field we can experience, but otherwise it is invisible and does not make a sound.

The ESA’s trio of Swarm satellites were launched in 2013 from the Plesetsk Cosmodrome in Russia, and are currently being used to understand exactly how our magnetic field is generated.

They do this by measuring the magnetic signals that stem from the Earth’s core, mantle, crust and oceans, as well as from the ionosphere and magnetosphere.

The Swarm mission is also looking into the impacts of space weather on our atmosphere.

Researchers in Denmark collected the data from the Swarm satellites and translated it into sound waves, making our magnetic field audible for the very first time.

The audio clip is accompanied by the sound of a solar storm.

Mr Nielsen said: ‘We have set it up so that each speaker represents a different location on Earth and demonstrates how our magnetic field has fluctuated over the last 100,000 years.

‘The project has certainly been a rewarding exercise in bringing art and science together.’

In 2019, astronomers recorded the eerie warbling ‘song’ sung by the Earth’s magnetic field when hit by a storm of charged particles sent from the sun.

The result was a sonic version of the aurora borealis light show, which can be seen near the poles when charged particles interact with the Earth’s atmosphere.

ESA experts analysed the magnetic waves produced as these ‘solar winds’ buffet the Earth, and turned the results into audible frequencies.

Data for the study was collected by the ESA’s Cluster II mission, which placed four identical spacecraft, flying in formation, in the Earth’s so-called magnetosphere.

The psychedelic song was identified after the team sent the spacecraft through the ‘foreshock’ region of the magnetic field.

This region faces the Sun and is the first part to be impacted by incoming solar storms.

Normally, the constant flow of charged particles that makes up the solar wind causes the foreshock to emit simple magnetic waves that — when converted into audio waves — sound something like a single, low musical note.

But when a solar storm strikes the Earth, the impact of it against the magnetic field’s foreshock causes this ‘music’ to rise in pitch — and become far more complex.

However, the last one took place about 780,000 years ago, causing many scientists to fear a flip could be imminent.

If a magnetic flip does happen, some experts claim if could render some parts of Earth ‘uninhabitable’ by knocking out power grids.

Researchers from Lund University have pieced together data on Earth’s geomagnetic field strength stretching back 9,000 years and say there’s no evidence a reversal is on the cards.