Are YOU guilty of ‘wish-cycling’? Nearly a FIFTH of items households try to recycle end up in landfill because they’re placed in the wrong bin, study reveals

Recycling is a great way of doing your bit for the environment and helping to protect Earth’s precious resources.

However, a new study has revealed that our desire to be sustainable may be doing more harm than good, as 17 per cent of items sent for recycling have to be thrown away.

According to waste company Biffa, this is because Brits are guilty of ‘wish-cycling’ – assuming that contaminated items will be recycled if put in the recycling bin.

Toothpaste tubes, disposable coffee cups, juice cartons and greasy pizza boxes are some of the most common items that are incorrectly recycled.

While non-recyclables can be picked out in the separation process, contamination from food or liquids can mean that potential recycling is sent to landfill.

David Heaton, a business director at Biffa, said: ‘Contamination happens when items are disposed of in the wrong bins or haven’t been rinsed before being recycled.

‘It’s important that people understand what should go in the recycling bin and how to “pre-cycle” beforehand (to rinse a tub or tray if it’s got food on it, for example) so we can recycle as much material as possible.

‘Should the alarming trajectory we’re seeing continue, contamination rates could reach nearly one quarter of all recycling by 2030 without legislative intervention.

‘It means recyclable resources are lost and cannot be reused.’ 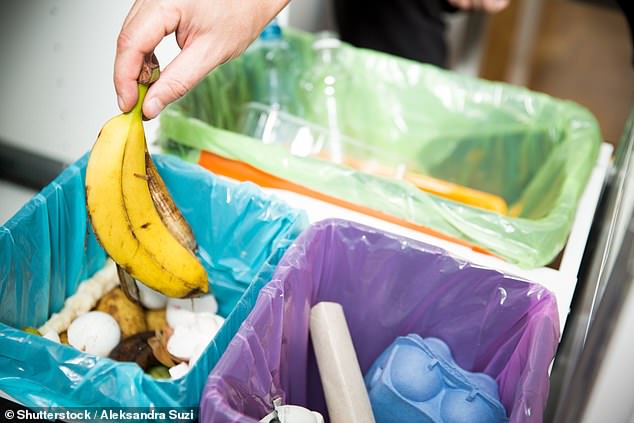 According to waste company Biffa, Brits are guilty of ‘wish-cycling’ – assuming that contaminated items will be recycled if put in the recycling bin (stock image)

COMMONLY ‘WISH-CYCLED’ ITEMS THAT SHOULD GO IN GENERAL WASTE

It is easy to think that, when throwing away old packaging, the more that goes in the recycling the better.

However, contamination from leftovers or other non-recyclables can result in recyclable items that have been put in the correct bin going to landfill.

Even if the unclean item is able to be removed before this eventuality, its contamination makes it less recyclable or recoverable.

A recent survey by waste reduction charity WRAP revealed that over four in five people recycle items they shouldn’t.

Experts at Biffa analysed the amounts of non-target and non-recyclable materials that entered UK material recycling facilities between 2016 and 2020.

This shows that, even as people are becoming more eco-conscious, wish-cycling is increasing both in households and businesses in England and Wales.

The study also found the majority of these contaminants were non-recyclable materials, where the items either are unable to be recycled or are too contaminated with other materials.

These make up 10.4 per cent of contaminants, while recyclable items that have been placed in the wrong bin accounted for 6.5 per cent of them.

The Biffa experts say that one of the best ways to prevent contamination of recycling is to rinse recyclable waste before putting it in the bin.

They suggest cutting off the top of old pizza boxes and only recycling that part to avoid contamination from the grease.

Checking the on-packaging recycling label’, or OPRL, to check it can actually be recycled is also a step many of us are guilty of skipping.

When it comes to plastics, Biffa also recommends checking the resin code, the number in the plastic triangle, to know whether it should go in the recycling bin.

Larger items, like electronics, furniture and batteries, can also be recycled but often cannot go in household recycling bins as they need specialist separating. While non-recyclables can be picked out in the separation process, contamination from food or liquids can mean that potential recycling is sent to landfill (stock image)

These will need to be taken to recycling centres or sustainable waste management companies to be properly disposed of and prevent contamination.

‘It’s vital as a nation that we get better at effective ‘pre-cycling’ – sorting waste correctly before collection – to reduce contamination rates,’ added Mr Heaton.

Campaigners have argued that packaging labels and differing standards across local councils cause confusion as to what can and cannot be recycled.

Government legislation is coming that will implement consistent kerbside collections and also make producers responsible for the cost of managing packaging waste.

However, this has been repeatedly delayed and is not due to come in until 2024.

While greater education on recycling labels and bins would help, Mr Heaton said that ‘without these changes in legislation, recycling and contamination rates are unlikely to improve.’

How many recycling symbols could you identify? 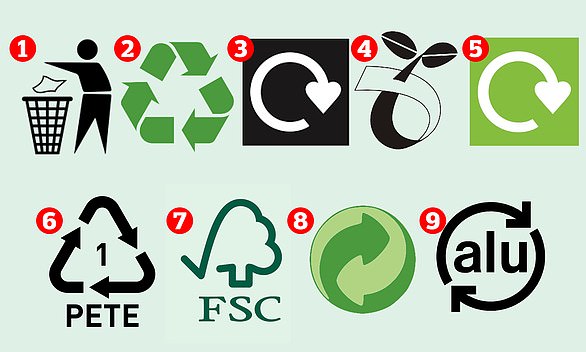 1. The ‘Tidy man’ – Reminder to properly dispose of waste in a bin.

2. Mobius loop – This means that products are capable of being recycled, but it does not mean it has been recycled before.

3. Check locally – This item is recycled by 20-75 per cent of local authorities in the UK, so you should check with your local council.

4. Compostable – Place this item in with your garden waste bin.

5. Widely recycled – This item is recycled by more than 75 per cent of local authorities. There may be conditions for it to be recycled, like rinsing the packaging out, or remove the sleeve or lid.

6. Plastics – This tells you what kind of plastic a product is made from, to help you understand how to recycle it. e.g. PET – short for Polyethylene Terephthalate. This is widely recycled.

7. Forest Stewardship Council – This product has been made from wood and sourced from a responsibly-managed forest.

9. Aluminium – This product is created from recyclable aluminium – this may be a drinks can, deodorant can, or foil.