Feeling down? Fake a smile! Forcing your cheeks to form a grin really does make you feel happier, study reveals

When you’re feeling a bit down, grinning might be the last thing on your mind.

But could faking a smile actually make you feel better?

The question has been part of a long-standing debate among psychology researchers about whether pulling facial expressions can influence our emotions – an idea known as the facial feedback hypothesis.

Now, new research has found strong evidence it does. 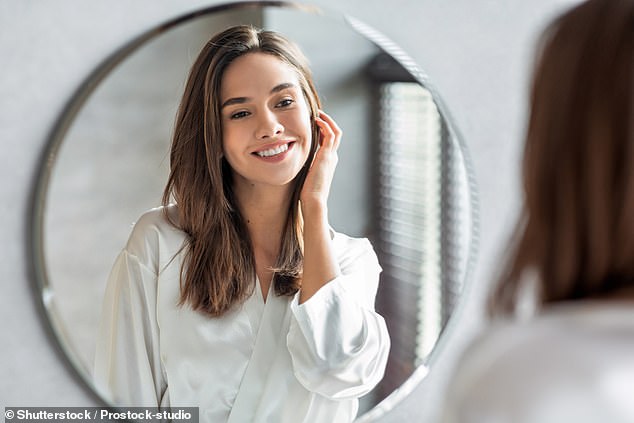 When you’re feeling a bit down, grinning might be the last thing on your mind. But could faking a smile actually make you feel better? (stock image)

Want to get your children to eat their broccoli? SMILE!

Good news for parents sick of imploring their child, with increasing desperation, to eat their greens – experts have a life hack to make dinnertime less exasperating.

The key is to smile, as children may eat twice as many vegetables if they first see adults enjoying eating the same, experts led from Aston University have concluded.

The finding could help kids to develop more of a taste for less popular vegetables like raw broccoli and generally facilitate healthier eating in children.

A global team of researchers, led by a scientist from Stanford University in California, collected data from 3,878 participants from 19 countries.

A third of participants were directed to hold a pen in their mouth, a third were asked to mimic facial expressions seen in photos of smiling actors, and the final third were given instructions to move the corners of their lips towards their ears and lift their cheeks using only the muscles in their face.

In each group, half the participants performed the task while looking at cheerful images of puppies, kittens, flowers, and fireworks, and the other half simply saw a blank screen.

They also saw these same types of images while directed to use a neutral facial expression.

In order to disguise the goal of the trial, the researchers mixed in several other small physical tasks and asked participants to solve simple math problems.

After each task, participants rated how happy they were feeling.

Analysis of the data revealed a noticeable increase in happiness from participants mimicking smiling photographs or pulling their mouth toward their ears.

While the effect was relatively small, it was similar to the increase in happiness that participants felt when looking at the cheerful images with a neutral expression.

However, there wasn’t a strong mood change in participants using the pen-in-mouth technique – possibly because this may not be actually creating an expression that closely resembles smiling, the researchers said.

Lead author Nicholas Coles said: ‘We experience emotion so often that we forget to marvel at just how incredible this ability is. But without emotion, there’s no pain or pleasure, no suffering or bliss, and no tragedy and glory in the human condition.

‘This research tells us something fundamentally important about how this emotional experience works.

Writing in the journal Nature Human Behaviour, the team said: ‘Data from 3,878 participants spanning 19 countries indicated that a facial mimicry and voluntary facial action could both amplify and initiate feelings of happiness.’

Scientists have found that projecting positive energy and smiling can improve athletic performance.

Researchers from Ulster University found that grinning can reduce an athlete’s perceived effort, or how hard they feel they are working, making the sport easier for them.