The Black Death is STILL having an impact today: Genes that protected people against the devastating bubonic plague 700 years ago now increase your risk of Crohn’s disease and rheumatoid arthritis, study reveals

Genes that protected people against the Black Death 700 years ago now increase your risk of Crohn’s disease and rheumatoid arthritis, a new study has revealed.

Scientists looked at DNA extracted from the teeth of people who died before, during and after the devastating bubonic plague, which swept through Europe, Asia and Africa from 1346 to 1353.

Their results revealed that a gene variant called ERAP2 was protective against the plague in the Middle Ages.

But today, it is linked with increased susceptibility to autoimmune diseases – a ‘balancing act’ upon which evolution plays with our genome. 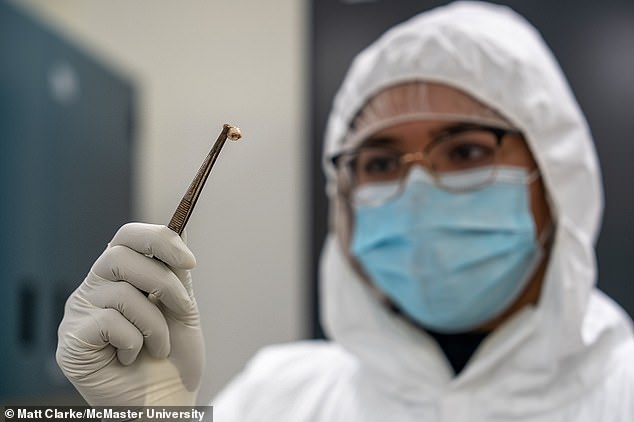 Using DNA extracted from teeth of people who died before, during and after the Black Death pandemic, researchers were able to identify genetic differences that dictated who survived and who died from the virus 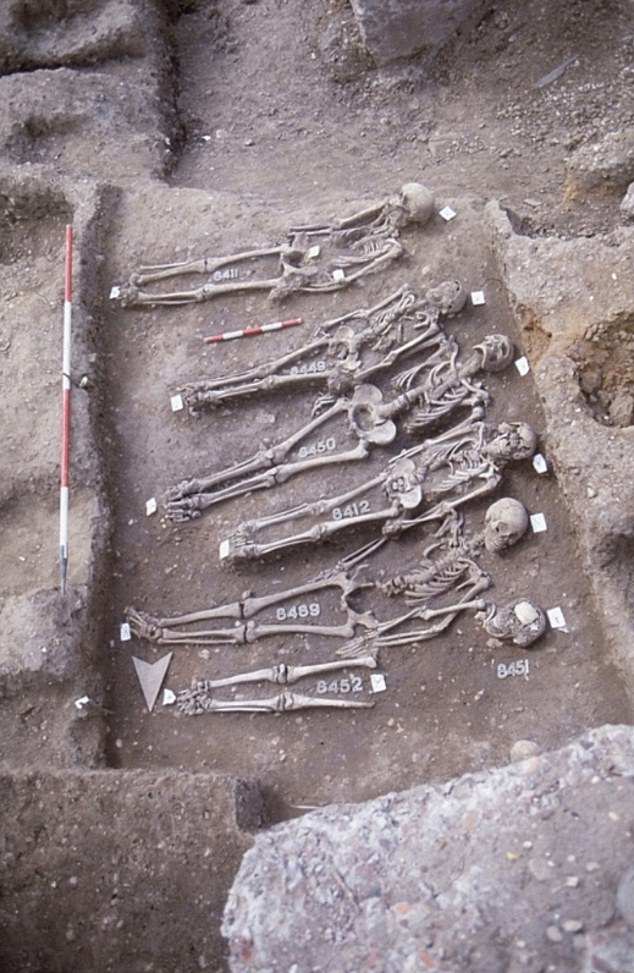 More than 500 ancient DNA samples were extracted and screened from the remains of individuals who had died before the plague, died from it or survived it. Pictured, East Smithfield plague pits 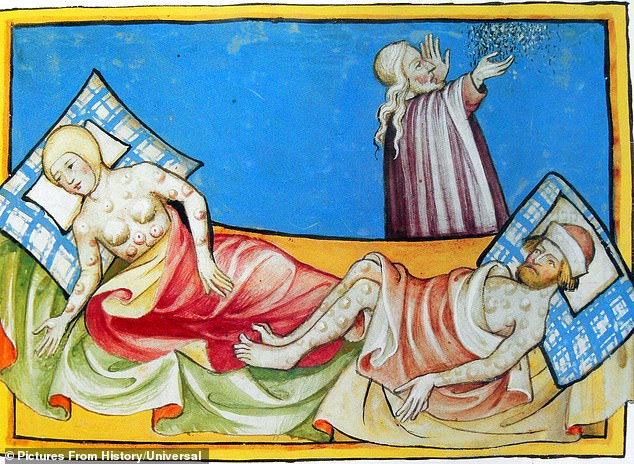 Pictured, a depiction of plague victims during the Black Death. The devastating bubonic plague pandemic ravaged Europe from 1346 to 1353

The Black Death pandemic devastated Europe between 1347 and 1351, but also killed people in North Africa and Western Asia.

This pandemic took a proportionately greater toll of life than any other known epidemic or war up to that time.

The Black Death is believed to have been the result of plague caused by infection with the bacterium Yersinia pestis.

Most scientists think that this bacterium was first passed from infected rodents to humans through the bite of fleas.

Modern genetic analysis shows that the strain of Y. pestis introduced during the Black Death is the ancestor to all existing Y. pestis strains known to cause disease in humans.

So the origin of modern plague epidemics lies in the medieval period.

‘This is, to my knowledge, the first demonstration that indeed, the Black Death was an important selective pressure to the evolution of the human immune system,’ said study author Professor Luis Barreiro at the University of Chicago.

‘There is a lot of talk about how pathogens have shaped human evolution, so being able to formally demonstrate which pathways and genes have been targeted really helps us understand what allowed humans to adapt and exist today.’

The Black Death, which plagued Europe, West Asia and North Africa, is the most infamous pandemic in history.

Historians have estimated that up to 50 per cent of Europe’s population died during the pandemic – possibly around 25 million people.

Ancient DNA research has already identified a bacteria called Yersinia pestis (a parasite of its host, the rat flea) as the Black Death’s cause.

Europeans living at the time of the Black Death were initially very vulnerable because they’d had no recent exposure to Yersinia pestis.

For this study, the team focused on a 100-year window before, during and after the Black Death, said to have reached London in the autumn of 1348.

More than 500 ancient DNA samples were extracted and screened from the remains of individuals who had died before the plague, died from it or survived it.

Some samples were taken from London, including individuals buried in the East Smithfield plague pits used for mass burials in 1348-9.

Additional samples were taken from remains buried in five other locations across Denmark.

A gene is a short section of DNA, the long molecule that contains unique genetic code.

Genes are the instructions for making the proteins our bodies are built of – from the keratin in hair and fingernails to the antibody proteins that fight infection.

Most genes code for specific proteins, or segments of proteins, which have differing functions within the body.

The research team focused on one gene with a particularly strong association to susceptibility, called ERAP2.

Individuals who possessed two identical copies of the ERAP2 gene survived the plague at a much higher rate than those with the opposing set of copies, the researchers found.

Having these two indentical copies allowed the individuals to produce functional proteins – molecules that help the immune system recognise an infection.

According to the scientists, these copies allowed for ‘more efficient neutralisation of Y. pestis by immune cells’.

The presence of this variant would have made a person about 40 per cent more likely to survive the Black Death, compared with those who did not have it.

It also meant those who survived the Black Death were able to pass on this genetic variant to their children, helping them to survive subsequent waves of the pandemic.

However, while the gene variant was protective against the plague in the Middle Ages, today it is linked with increased susceptibility to autoimmune diseases – a ‘balancing act’ upon which evolution plays with our genome. 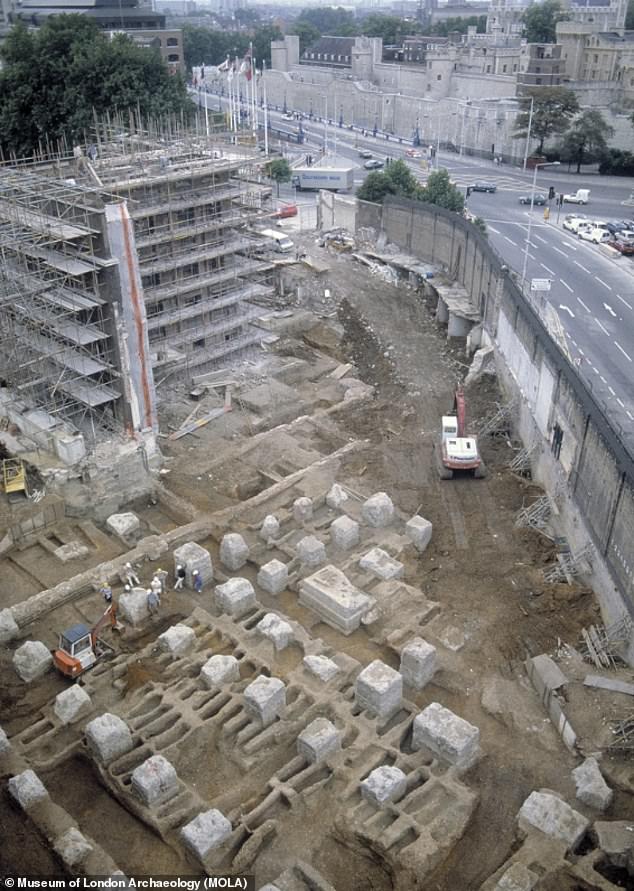 Pictured is the excavated East Smithfield grave pits in east London, with the Tower of London in the background

Study author Hendrik Poinar at McMaster University in Hamilton described the ‘good’ ERAP2 copies as ‘like a pair of scissors’.

‘If you have both copies of the gene and they are good – you’re able to cut up pathogens really well,’ he told MailOnline.

‘You present their bits and pieces to immune cells which can muster a great response, and you defeat the enemy. 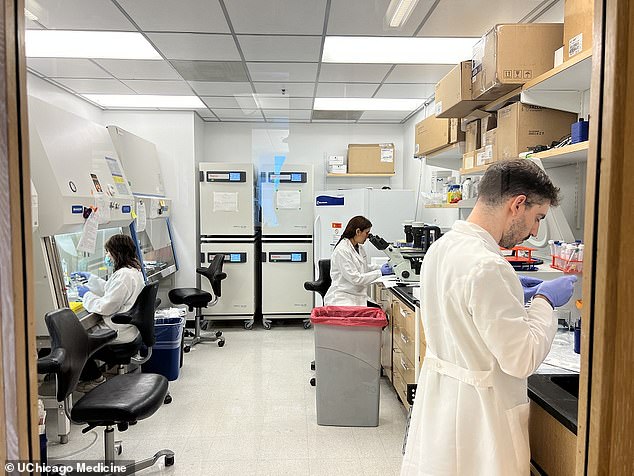 For the study, the research team focused on one gene with a particularly strong association to susceptibility, called ERAP2. Pictured, embers of the Barreiro Lab in Chicago conduct cell culture experiments

‘Now, those genes that your ancestors gave you because they survived the Black Death were primed for a time when infectious disease was a major and common threat.

‘Today we don’t have those, so those hyperactive scissors see your own system and attack it instead.’

Future research will scale the project to examine the entire genome, not just a selected set of immune related genes.

The team also hopes to explore genetic variants that affect susceptibility to bacteria in modern humans and compare them to these ancient DNA samples to determine if those variants were also a result of natural selection.

BLACK DEATH DID NOT IMPACT ALL REGIONS EQUALLY, STUDY CLAIMS

The Black Death did not impact Europe equally, a recent study suggests.

Based on clues from pollen, experts have found the plague had little effect in some parts of the continent despite killing huge numbers in other regions.

There were signs of sharp agricultural declines in Scandinavia, France, southwestern Germany, Greece and central Italy during the time of the bubonic plague, which the academics argued was suggestive of high mortality rates.

Meanwhile, no interruptions were spotted across parts of Central and Eastern Europe and in Ireland and Iberia – implying the opposite.

Researchers admit they don’t know why there was such a big difference across the continent.

However, they say multiple factors may have made parts of the continent more prone to the plague than others.