‘Time to drop Netflix!’: Streaming giant’s plan to charge £4.99 a month for its new ad-supported tier that forces subscribers to watch adverts in the MIDDLE of movies is branded ‘disgusting’ by users

Netflix subscribers are fuming after the streaming giant announced its new ad-supported tier will cost £4.99 per month, and will show adverts during films and TV shows.

Users took to Twitter to voice their displeasure about the new tier, called ‘Basic with Ads’, and the prospect of having to endure ads midway through their favourite content.

Twitter user @thilirocks said: ‘Time to drop Netflix! Imagine an ad appearing in the middle of a movie! What nonesense!’ [sic]

And @honeyvercetti said: ‘As if you’re not making enough money!!!!’

Netflix said there will be ‘a plan for every fan’ and stressed that none of the existing tiers are getting ads.

‘Enjoy your Netflix experience exactly as it is today? Great! Nothing about the way you watch Netflix is going to change,’ it said.

Netflix announced earlier in the year that it would introduce adverts, but official details of the new tier were only revealed on Thursday.

In an online video briefing, Netflix also provided a glimpse of what the experience of seeing ads on Netflix will be like.

‘As if you’re not making enough money’: Users took to Twitter to voice their displeasure about the new Netflix tier

Twitter user @thilirocks said: ‘Time to drop Netflix! Imagine an ad appearing in the middle of a movie! What nonesense! 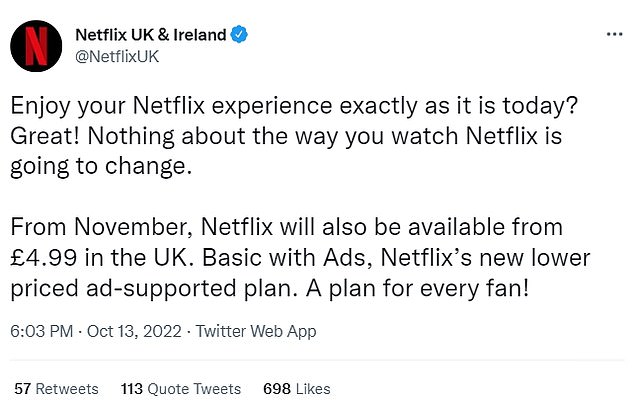 Netflix said there will be ‘a plan for every fan’ and stressed that not all tiers are getting ads. Netflix currently has three subscription tiers – Basic, Standard and Premium – none of which have adverts.

@Jessicasparkelz said: Netflix was being ‘absolutely disgusting’ and had become too big for their boots

Basic with Adverts, which launches in the UK on November 3, will show an average of four to five minutes of adverts per hour, with each advert 15 or 30 seconds in length.

The ads will play before and even during content, which could infuriate viewers if they interrupt a particularly dramatic or suspenseful moment in the show.

And @pvrekhs said: ‘the whole point of netflix is there being no ads who wanted this.’

Netflix currently has three subscription tiers – Basic, Standard and Premium – none of which have adverts.

The streaming giant said none of these tiers will change due to the launch of the new ad-supported tier, although some users seemed unconvinced.

Twitter user @chrisg_199 asked: ‘How long before the ads slowly creep into the higher priced plans?’

And @IamgemmaWright said: ‘I’d rather pay 11 quid and stay ad-free.’

Since its inception 15 years ago, Netflix has refused to include commercials in any of its offerings, but that has all changed this year.

In April, Netflix announced it would abandon its resistance to ads after disclosing it had lost 200,000 subscribers during the first three months of the year.

Paolo Pescatore, analyst at PP Foresight, told MailOnline that the move to offer an ad service was ‘not part of the company’s script’, but added that it just gives consumers more options to choose from.

‘Adding an ad tier helps Netflix diversify its business model further, offering something for everyone which should resonate with a broad range of users,’ he said.

‘The move is as much as about retaining users as well as signing up new ones.’

A cheaper tier could help entice users who are on a budget, and in turn help Netflix reverse the recent fall in subscriber numbers.

Basic with Adverts will cost £4.99 a month in the UK and will launch on November 3 at 4pm, according to the streaming giant (file photo)

According to Pescatore, the shift towards streaming will negatively impact ‘linear TV’ networks and free-to-air broadcasters who rely on ads as the main revenue source.

Linear TV refers to the traditional form of watching TV, where we tune into different channels that run throughout the day.

‘Make no mistake, this is a significant move that takes Netflix in direct competition with free-to-air broadcasters around the world,’ Pescatore said.

BASIC WITH ADS: PRICE AND RELEASE DATES BY COUNTRY

Note: All prices are per month

‘However, by offering the new “Basic with Adverts” plan, they’re showing that they’ve taken onboard customer feedback,’ Phillips said.

‘After losing 200,000 subscribers between January and March this year, the company has been forced to alter their business model.

We’re living in economically challenging times; people are feeling the pinch and subscription services which don’t provide value are at risk of being cancelled.

By bringing about these new changes, Netflix are giving their customers more options and encouraging them to stay.’

Ernest Doku, streaming and TV expert at Uswitch.com, said the cheaper subscription option ‘could prove popular for many’.

‘Falling Netflix subscriber numbers in recent months have shown that the nation’s streaming habits are not immune to the cost-of-living crisis,’ he said.

‘The £4.99 monthly cost is £2 cheaper than the current most basic package, and better than half the price of the standard subscription – which could be attractive for new customers.’

Jake Moore, tech expert and security advisor at ESET, pointed out that other steaming services offer their platforms with ads for free, such as Spotify and YouTube.

He also said that Netflix will ‘inevitably attempt to increase this lower tier price in the future’, following on from price hikes of its various tiers in the past.

‘With the cost of living crisis, adverts may be a small price to pay in order to still watch your favourite shows,’ Moore said.

‘But as history shows us, Netflix will inevitably attempt to increase this lower tier price in the future.’ 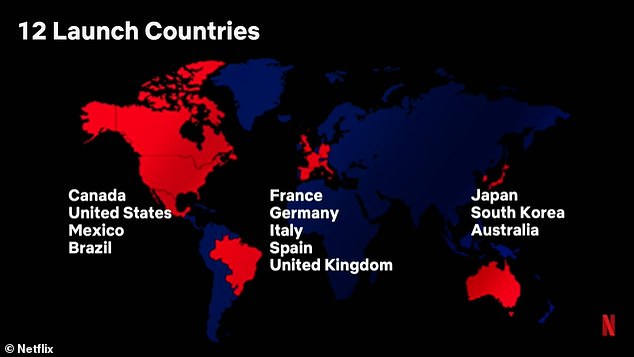 Basic with Ads is launching in 12 different countries from next month, including the UK and the US

Research at multimedia company Bitmovin suggests that users would rather pay a bit of extra money to not have to endure ads.

‘Our recent research suggests that in a paid subscription model, the majority (58 per cent, rising to 67 per cent in those aged 18-35) would rather pay that little bit extra to remove ads,’ said Stefan Lederer, Bitmovin’s CEO.

‘Most viewers (60 per cent) are happy to tolerate ads when it comes to free streaming services, however it seems if paying for a subscription, no matter the cost, they expect ad-free content.’

Basic with Ads also includes a couple of restrictions compared to the paid version of Netflix – firstly, it won’t offer users the ability to download films and TV shows.

Secondly, some films and TV series won’t be available due to licensing restrictions, which Netflix said it is currently working on lifting.

A lot of the details about Netflix’s new tier were revealed before yesterday’s official announcement – including the restriction on downloads and a reduction on the amount of content available.

Netflix also previously revealed it’s been working with Microsoft, its ‘technology and sales partner’, on implementing the new tier.

Netflix said adverts will be targeted by country and genre, such as action, drama, romance and sci-fi, to ‘help advertisers reach the right audience’.

Advertisers will also be able to prevent their adverts from appearing on content that might be inconsistent with their brand, such as sex, nudity or graphic violence.

Netflix had originally said it would launch adverts in 2023, but it’s brought the launch date forward, allegedly due to dwindling subscriber numbers.

Industry insiders suspected Netflix wanted to introduce ads before streaming rival Disney+ releases its own ad-supported tier in the US on December 8.

In the US, Disney+ currently costs $7.99 per month, but this will be the price of the new ad-supported tier when it arrives. 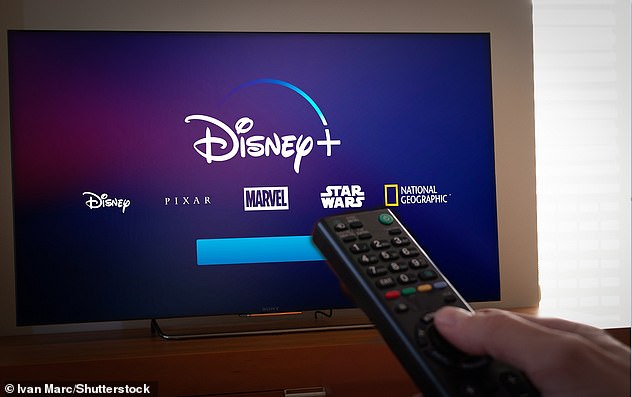 Netflix’s streaming rival Disney+ is also introducing an ad-supported subscription tier later in 2022, although similarly the price is not yet known

As Disney+ is £7.99 a month in the UK, it’s believed that the UK price will similarly go up by £3 a month when the new ad tier arrives, likely next year.

‘Netflix isn’t the only streamer making this move, with the ad-supported Disney+ Basic due to arrive in December, and others likely to follow,’ said Doku.

‘The whole industry is engaged in a battle for viewers, and content quality alone is no longer enough to keep subscribers.’

Prices correct as of October 2022