The world’s largest digital camera, which will capture the widest ever images of the universe, has been officially been unveiled by scientists.

The 3,200-megapixel camera – powerful enough to spot a golf ball from 15 miles away – is around the size of a small SUV, while its lens alone has a diameter of over five feet.

Once finished, it will take digital images of the entire visible southern sky every few nights from the Rubin Observatory, atop a mountain in Chile called Cerro Pachon.

It will produce a wide, deep and fast survey of the night sky, cataloguing the largest number of stars and galaxies ever observed. 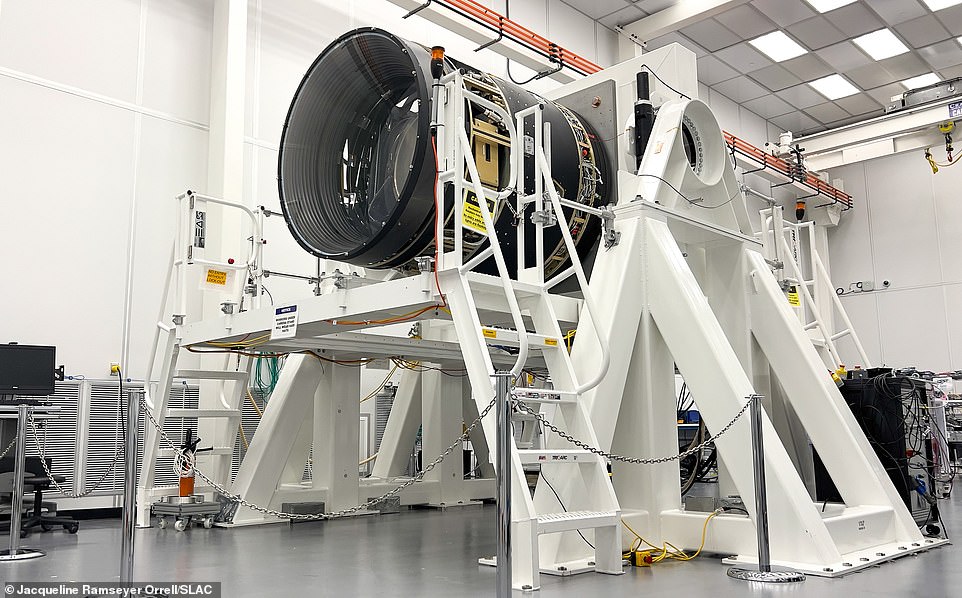 The world’s largest camera with a five-foot lens and a 3,200-megapixel camera has been unveiled ahead of starting operations next year 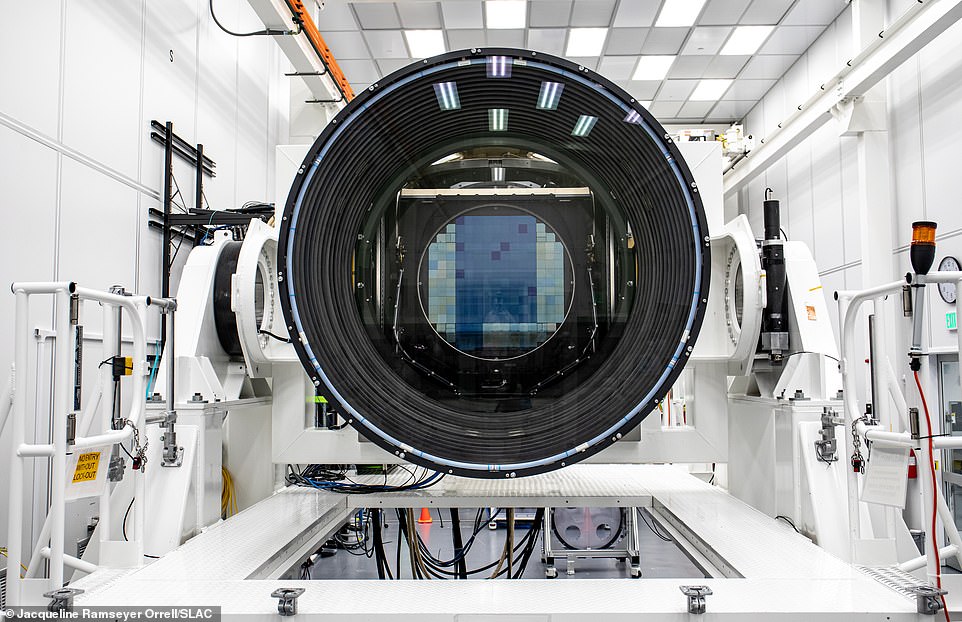 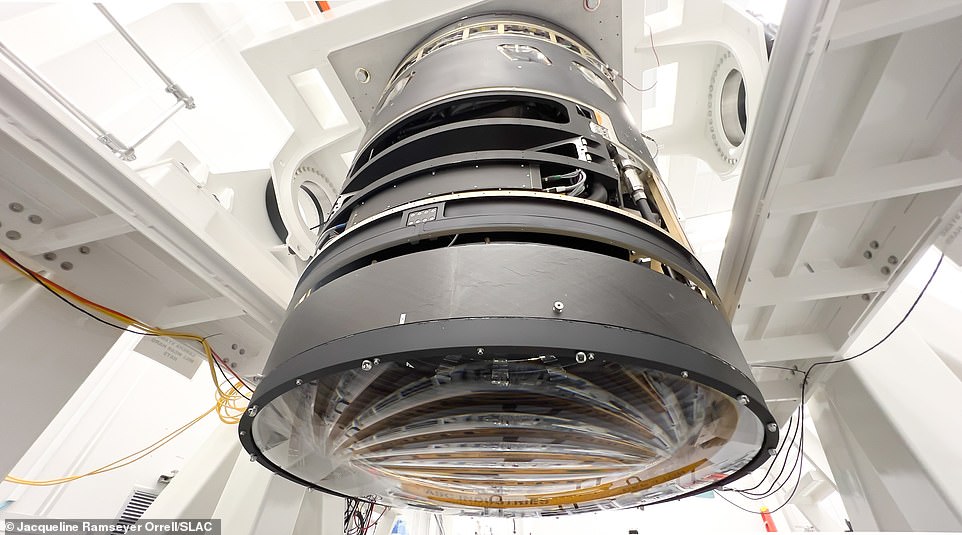 Once finished, it will take digital images of the entire visible southern sky every few nights from the Rubin Observatory, atop a mountain in Chile

Although the camera isn’t fully complete yet, all of its mechanical components are now together.

SLAC invited photographers to the clean room at SLAC National Accelerator Laboratory where the camera is positioned to see the huge ‘photogenic structure’ for the first time.

‘The Rubin Observatory LSST Camera is the largest digital camera ever constructed,’ the camera’s website says.

Visitors to SLC were able to see the impressive focal plane – which contains 189 sensors known as CCDs – through the camera’s lenses. Each CCD packs more pixels than a single iPhone.

The focal plane on this camera is similar to the imaging sensor of a digital consumer camera or the camera in a smartphone.

It captures light emitted from or reflected by an object and converts it into electrical signals that are used to produce a digital image.

However, this focal plane is more than two feet wide and contains 189 individual sensors that collectively produce 3,200-megapixel images.

Two feet is enormous compared to the 1.4-inch-wide imaging sensor of a full-frame consumer camera, and large enough to capture a portion of the sky about the size of 40 full moons, or spot a golf ball in an image from 15 miles away.

On completion, imaging sensors in the camera should be able to spot objects 100 million times dimmer than those visible to the naked eye – a sensitivity that would let humans see a candle from thousands of miles away.

Before the end of the year, the camera will undergo one final modification – the installation of an updated refrigeration system.

At that point the camera will be complete and ready for final testing before it ships to Chile in May of 2023 and becomes fully operational the following year. 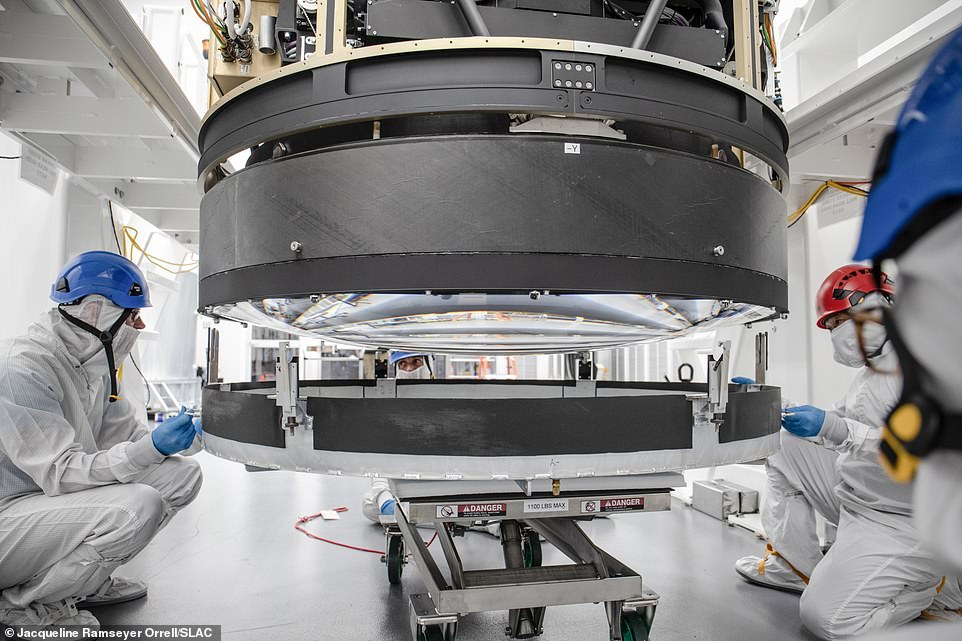 The telescope will be equipped with a 3,200-megapixel camera – a powerful instrument that would require 1500 high-definition screens to display just one of its images 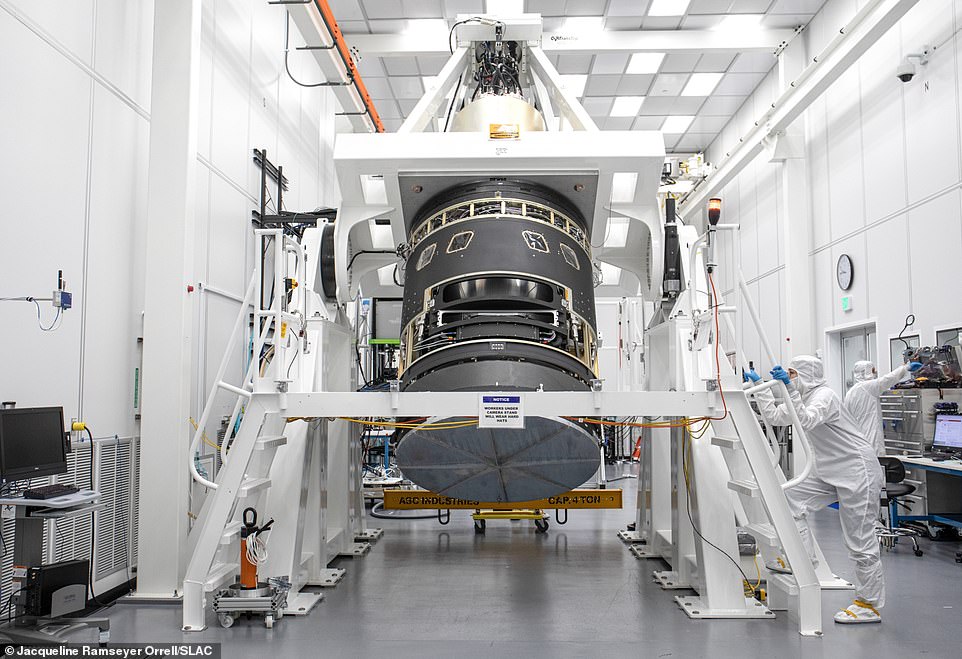 Following the installation of an updated refrigeration system, the camera will be complete and ready for final testing before it ships to Chile in May of 2023 and becomes fully operational the following year

Using LSST, the Rubin Observatory will create the largest astronomical movie of all time and shed light on some of the biggest mysteries of the universe, including dark matter and dark energy.

‘This achievement is among the most significant of the entire Rubin Observatory Project,’ Steven Kahn, SLAC’s director of the observatory, previously said.

‘The completion of the LSST Camera focal plane and its successful tests is a huge victory by the camera team that will enable Rubin Observatory to deliver next-generation astronomical science.’

RUBIN OBSERVATORY WILL PRODUCE THE WIDEST IMAGES OF THE UNIVERSE 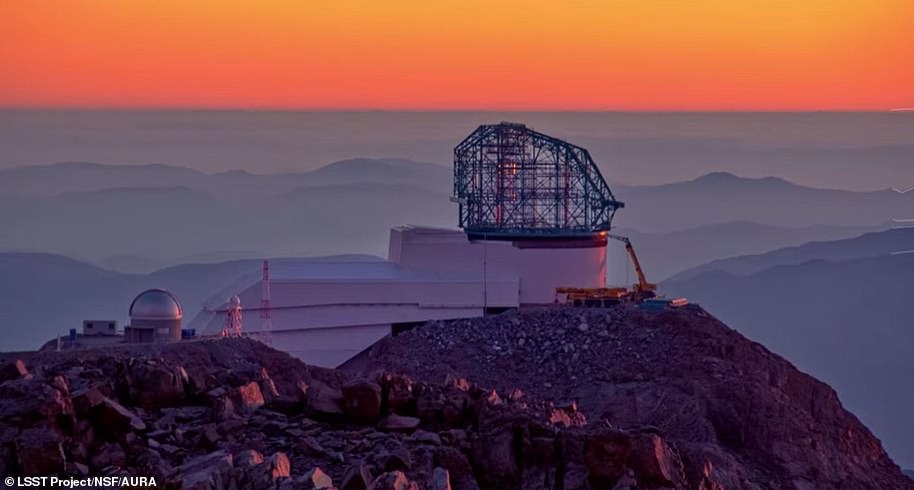 The observatroy will sit atop Cerro Pachón in Chile at nearly 8,700 feet in altitude, where observing conditions are optimal

The goal of the Vera C. Rubin Observatory project is to conduct the 10-year Legacy Survey of Space and Time (LSST).

LSST will deliver a 500 petabyte set of images and data products that will address some of the most pressing questions about the structure and evolution of the universe and the objects in it.

It aims to conduct a deep survey over an enormous area of sky, with a frequency that enables images of every part of the visible sky to be obtained every few nights.

It will continue in this mode for 10 years to achieve ‘astronomical catalogues’ thousands of times larger than have ever previously been compiled.

The focal plane is large enough to capture a portion of the sky about the size of 40 full moons.