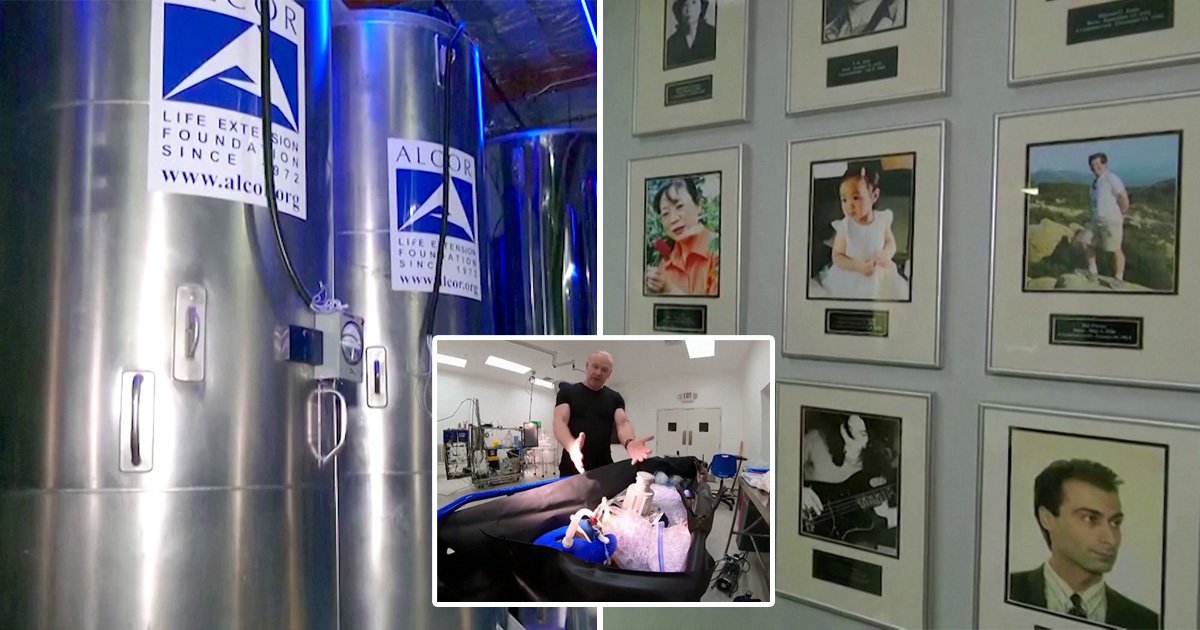 For some people in Arizona, time and death is ‘on pause’.

Inside tanks filled with liquid nitrogen are the bodies and heads of 199 humans who opted to be cryopreserved with the hopes of being revived in the future.

Many of the patients – as Alcor Life Extension Foundation calls them – are people who were terminally ill with cancer, ALS or other diseases with no cure in the present day.

One of the patients is Matheryn Naovaratpong, the youngest person to be cryogenically frozen.

Alcor’s former CEO, Max More, pointed to a picture of the girl as reporters were given a tour of the facility.

‘A little girl from Thailand who had brain cancer. Both her parents were doctors and she had multiple brain surgeries and nothing worked, unfortunately. So they contacted us,’ More explained.

Naovaratpong’s case is one of only a few at Alcor that is public. Another with a terminal disease is Hal Finney, who passed away from ALS. Finney is well-known in the cryptocurrency community for being the recipient of the first Bitcoin transaction.

When it comes to famous figures, Paris Hilton has reportedly signed up for cryopreservation. America’s Got Talent, Simon Coldwell, had publicly announced his membership in 2011 but later opted out.

Rumors about Walt Disney being frozen have circulated for decades, but that was debunked by his own family.

Legendary baseball player, Ted Williams, who died in 2002 is currently one of Alcor’s frozen patients.

More says he thinks of cryonics as an extension of emergency medicine.

‘We come at the stage where doctors today have given up. Today’s medicine and technology is not sufficient to keep you going. But we’re saying instead of just disposing of the patient, give them to us.

‘We’re going to stabilize them, stop them getting worse, and hold them for as long as it takes for technology to catch up and allow them to come back to life and continue living,’ he said.

Natasha Vita-More, futurist and author, is married to Max Moore, and also one of the company’s 1,392 living members. The couple met in 1992 during a futurist event in Los Angeles and discovered both were members of the company.

Vita-More is signed up to be ‘neurosuspended’, meaning only her brain will be cryopreserved.

Best case scenario, Vita-More says, is that patients who were frozen, will meet in the future with other family members or pets who were also preserved. ‘And the destination would be the future where a person who had a cancer or ALS or some other type of injury or disease is revived,’ she said.

‘The disease or injury cured or fixed, and the person has a new body cloned or a whole body prosthetic or their body reanimated and meet up with their friends again.’

But there are skeptics in the medical world.

Doctor Arthur Caplan, director of the Division of Medical Ethics and professor of Bioethics at the New York University Grossman School of Medicine in New York City, reckons the idea is far-fetched.

‘The only group that you really see getting excited about the possibility are people who are sort of, people who specialize in studying the distant future or people who have a stake in wanting you to pay the money to do it,’ he said in a Zoom interview with news agency Reuters.

Cryonics is based on anticipation and in the hope that one day science will be advanced enough for the restoration of cryopreserved humans. Alcor does not make any promises or guarantees, but that hasn’t stopped people from giving the company their money.

Alcor says that the vast majority of its members don’t have that money, so they use life insurance equal to that amount, making Alcor the beneficiary of the policy.