Microsoft has heralded a ‘new era’ of computing with the launch of new devices in its touchscreen Surface range.

The Redmond, Washington-based tech giant has revealed the £1,099 Surface Pro 9, a 2-in-1 detachable with the ‘power of a laptop and the flexibility of a tablet’.

All three devices run Windows 11 and are compatible with the Surface Slim Pen 2, the firm’s stylus for drawing and jotting notes.

Microsoft has said the new devices take Windows ‘into the next era of computing’, but an analyst claims the products only show ‘incremental’ updates. 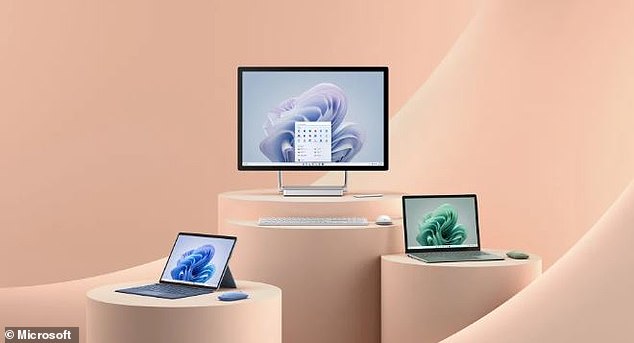 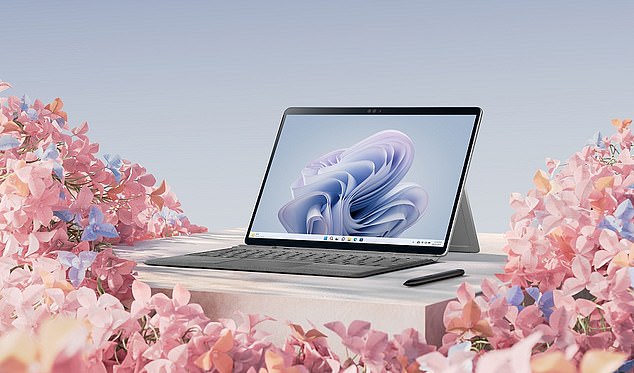 ‘Today, we shared our vision for the next era of the Windows PC,’ said Panay, who is often considered the ‘father’ of the Surface brand.

‘The next wave of computing is here. We continue to look forward to what you’ll achieve with these amazing products.’

Surface Pro 9 is the latest Surface Pro, the tech company’s family of flagship 2-in-1 hybrid devices.

Like its predecessors, Surface Pro 9 has a tablet screen and stand that comes with a detachable keyboard, and so it can be used as either a tablet or a laptop.

It features a 13-inch display with high-grade aluminum casing in a new set of metallic colours.

Microsoft says it’s the most powerful Pro ever, combining ‘the power and flexibility of a tablet with the performance of a laptop’.

The firm also touted the device’s high refresh rate – how many times per second the display is able to draw a new image.

Surface Pro 9 has a refresh rate of 120Hz – meaning it is refreshing an image 120 times per second.

‘With incredible levels of quality, performance and versatility, the edge-to-edge display on Surface Pro 9 is stunning,’ Panay said.

The device works with the Surface Slim Pen 2, which is sold separately, so users can take notes on the display ‘like writing with pen and paper’.

‘A Surface display is more than a sheet of glass. It’s a canvas, a journal, a notepad, an editing bay and a cinema screen,’ said Panay.

‘It’s a vibrant sheet of pixels that transforms into the combination of experiences that keep you informed, productive, entertained and connected.

Microsoft also announced the Surface Laptop 5, which is released on October 25 and starts from £999 – making it the cheapest of the new devices.

Surface Laptop 5 is 50 per cent more powerful than its predecessor thanks to a new Intel processor.

The ‘super-lightweight’ device also comes with ‘all-day battery life’, although the firm admitted battery life varies ‘significantly’ based on usage, network, signal strength and other factors. 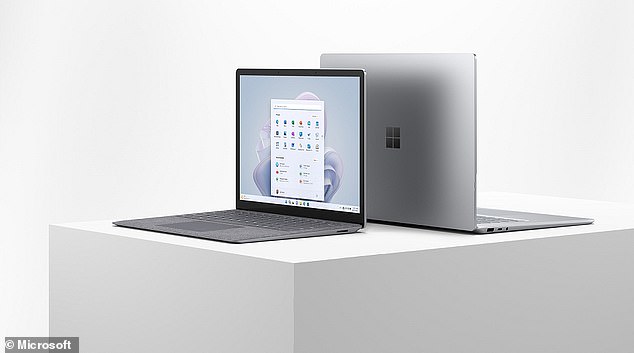 Microsoft says: ‘Surface Laptop 5 is sleek and elegant, providing all-day battery life as our customers have come to appreciate and expect’

The device’s processing power has been designed for multi-tasking – in other words, having several applications open at once.

‘From the effortless opening and fast log-in with Windows Hello, to the touchscreen, precision touchpad and perfect typing experience, Surface Laptop 5 offers the craftsmanship, comfort and capabilities to jump in and produce your best work,’ Panay said.

Lastly, the Surface 2+, an updated version of the Surface Studio 2 released four years ago, costs a whopping £4,699 and is released on November 1.

The large-screen desktop is designed to be used like an artist’s canvas and can be folded down into a range of angles to draw and work on.

Microsoft said it gives creators ‘a large canvas to express yourself at any angle’.

In addition, Microsoft confirmed that a new set of Adaptive Accessories to help those with a disability more easily use their PC will go on sale this autumn. 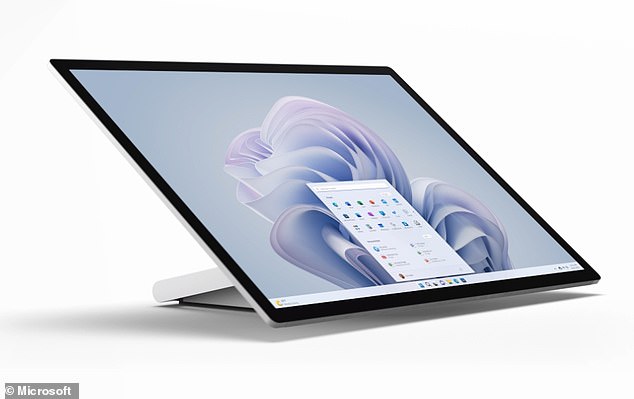 The accessories have been designed for those who may have difficulty using a traditional keyboard and mouse.

Commenting on the new range of devices, industry expert Ben Wood, chief analyst at CCS Insight, said: ‘Compared to previous years this is a relatively incremental update to Microsoft’s Surface line of products.

‘This appears to reflect a wider trend in 2023 where tech companies are taking existing products and making small improvements to keep the product line fresh.

‘There’s nothing wrong with that, but it reflects the slowing innovation curve when it comes to PCs, smartphones and other consumer electronics devices.’

During the event to unveil the new devices, the US firm also announced two new apps that are powered by artificial intelligence (AI).

Microsoft Designer uses various AI – including a text-to-image system called DALL-E – to generate designs and images as a user needs them for whatever content they want to create.

‘This is an amazing example of the power of cloud-based AI and what it means expressed through an application,’ he said.

‘Designer helps you create from your own content or ideas and makes it easy to design social media posts, invitations, and much more, fast.

‘It also automatically helps you get a variety of unique images and designs that are generated just for you. I’m so excited for this app, it’s going to be a game changer for me personally.’

Meanwhile, a new Image Creator app, which will enable users to generate their own images by entering a description into an AI-powered app, is to be integrated into Microsoft’s Bing search engine and Edge web browser.

Outpainting allows the system to imagine what’s outside the frame of famous paintings such as Girl with The Pearl Earring, Mona Lisa and Dogs Playing Poker.

As users have shown, it can do this with any kind of image, such as the man on the Quaker Oats logo and the cover of the Beatles album ‘Abbey Road’.

DALL-E relies on artificial neural networks (ANNs), which simulate the way the brain works in order to learn and create an image from text.

DALL-E already enables changes within a generated or uploaded image – a capability known as Inpainting.

It is able to automatically fill in details, such as shadows, when an object is added, or even tweak the background to match, if an object is moved or removed.

DALL-E can also produce a completely new image from a text description, such as ‘an armchair in the shape of an avocado’ or ‘a cross-section view of a walnut’.