Memory like a goldfish? Maybe that’s not such a bad thing after all! Study shows goldfish can accurately estimate distance to keep track of how far they’ve swum

Goldfish may not have bad memories after all, as they can keep track of how far they have swum.

Scientists trained goldfish to swim 70 centimetres, then stop when someone waved over their tank.

When the waving was taken away, the goldfish still remembered to swim almost the exact same distance – 74cm on average – for a tasty bloodworm snack.

They simply used a stripy pattern on their tank to judge how far they had travelled, the study found, rather as they might use rocks, algae and submerged branches in nature.

Researchers worked out the goldfish were using the stripes because, when the stripes were placed closer together, the fish got confused over the distance. Scientists trained goldfish to swim 70 centimetres, then stop when someone waved over their tank. When the waving was taken away, the goldfish still remembered to swim almost the exact same distance – 74cm on average – for a tasty bloodworm snack (stock image) 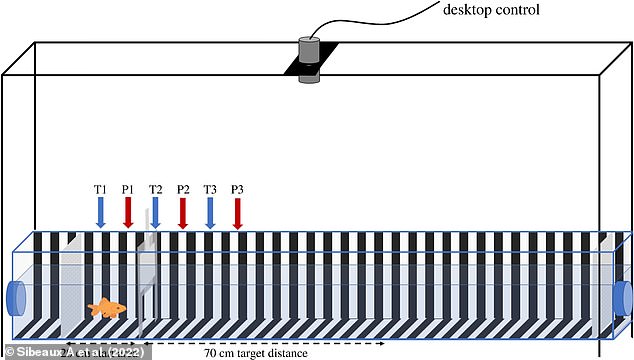 Experimental set-up to test distance estimation in the goldfish. Black and white striped panels covered the tank walls and floor providing optic flow information. The fish was placed in a movable start area with a sliding door. Once the door opened, it was trained to swim until the experimenter waved above the tank at the 70 cm target distance and then to return to the start area to receive a food reward

Scientists created a tank with 2cm-wide black and white vertical stripes along the walls and base.

Nine goldfish were trained to swim along the tank for 70cm, and then return to their starting position when someone waved over them, using a food reward.

The researchers then stopped doing the gestures, and tested the fish using different backgrounds to see if they could still remember the 70cm swimming distance.

These backgrounds were 1cm-wide vertical stripes, 2cm-wide horizontal stripes and a checked pattern.

Each fish made the journey 45 times for each background, and was recorded on video.

Dr Adelaide Sibeaux, who led the study from the University of Oxford, said: ‘Forgetful people say they have a mind like a goldfish, but that’s not fair.

‘Goldfish are clearly not stupid at all, as they have a good memory for distance based on the flow of objects passing by as they swim, like stripes on their tanks.

‘Even when I left for a week for Christmas, and came back to restart the study, they knew how to do it.’

The goldfish, named G1 to G9 in the study, but given names like Coco and Bubble by researchers, were trained using food rewards when they successfully swam 70 centimetres.

But they swam only 47cm on average when the stripes on their tank were switched for stripes closer together, suggesting the fish had used the visual background to work out distance.

Some goldfish may also use the number of times they move their fins while swimming to judge distance, based on results from five of the fish.

The tiny fish have previously been found to be able to ‘count’ numbers of objects, so could theoretically keep track of their fin movements too.

However goldfish do not use the time of a journey to judge their distance, the study suggests.

The time it took the goldfish to cover the distance each time was very inconsistent.

Time may be a poor strategy for navigation in goldfish because, in the wild, they frequently get delayed mid-journey by socialising, mating or trying to find food. 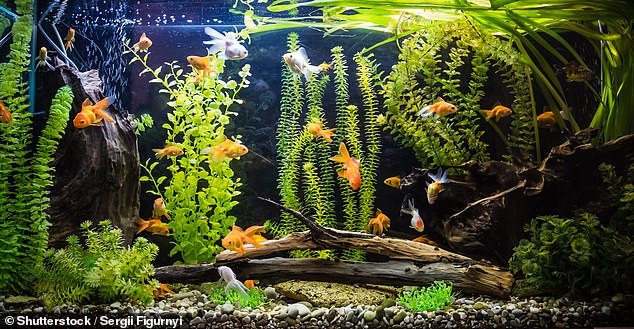 The fish swam only 47cm on average when the stripes on their tank were switched for stripes closer together, suggesting they had used the background to work out distance (stock image) 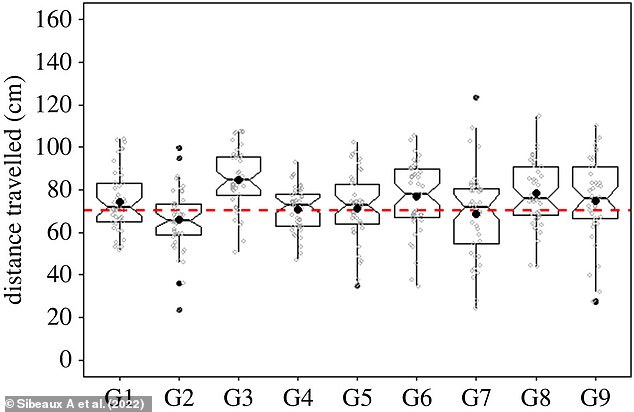 It may be important for fish to understand distance, so they can find home after a foraging trip, or remember where to go for shelter when being chased by a predator.

Now experts know more about how goldfish judge distance, they will try to work out if fish, like humans and other mammals, have ‘grid’ and ‘place’ cells in their brain to help them navigate.

That will reveal when in the tree of life, before or after mammals split apart from fish, this internal brain map evolved.

The study, published in the journal Proceedings of the Royal Society B: Biological Sciences, did not find all fish were great at judging their distance however.

Bubble managed to swim almost 85cm on average, rather than the required 70cm.

Dr Sibeaux said: ‘I was so impressed that the goldfish managed to achieve 74cm on average, which is so close to the target.

‘But maybe Bubble, like some people, is just less good at navigating, and I sympathise, because I often get lost.’

Goldfish have been trained to ‘drive’ a robotic tank around a room.

Scientists in Israel constructed a ‘fish operated vehicle’ consisting of a water-filled tank, a camera and a computer on top of a set of wheels.

In tests, the onboard camera and computer were able to detect the fish’s position in real time and activate the vehicle motors to move the vehicle in the same direction.

Six goldfish were successfully trained to use the bizarre device and managed to find their way around the small room towards a food reward.

The results suggest that fish can adjust their navigation skills ‘to a wholly different terrestrial environment’, according to the researchers.