Heatwaves ‘beyond human limits’ will make entire regions of the world uninhabitable within decades – sparking ‘large-scale suffering and loss of life’, UN warns

Heatwaves will become so extreme in certain regions of the world within decades that human life there will be unsustainable, a new study has warned.

Extreme temperatures are predicted to ‘exceed human physiological and social limits’ in the Sahel, the Horn of Africa and south and southwest Asia.

The report was released by the United Nations and Red Cross, and said these events will trigger ‘large-scale suffering and loss of life’ in these areas.

The authors said that aggressive steps need to be taken immediately to avoid potentially recurrent heat disasters and the worst of the consequences.

‘There are clear limits beyond which people exposed to extreme heat and humidity cannot survive,’ the report said.

‘There are also likely to be levels of extreme heat beyond which societies may find it practically impossible to deliver effective adaptation for all.’ 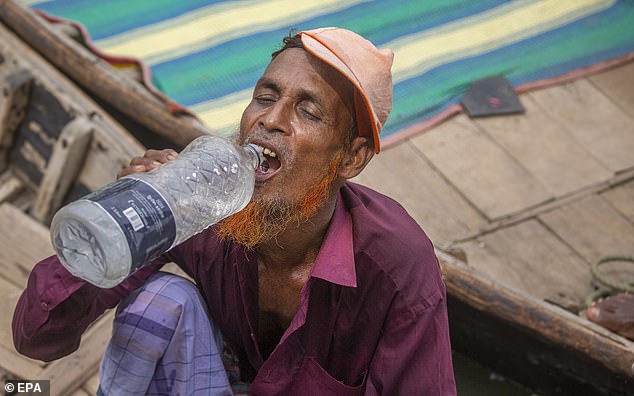 The combined effects of ageing, warming and urbanisation are likely to cause a significant increase in the number of at-risk people in the developing countries, according to the report. Bangladesh, for example, experienced as much as a 20 per cent increase in deaths on heat wave days compared with an average day. Pictured: A boat man drinks from a water bottle during a hot day in Dhaka, Bangladesh this April 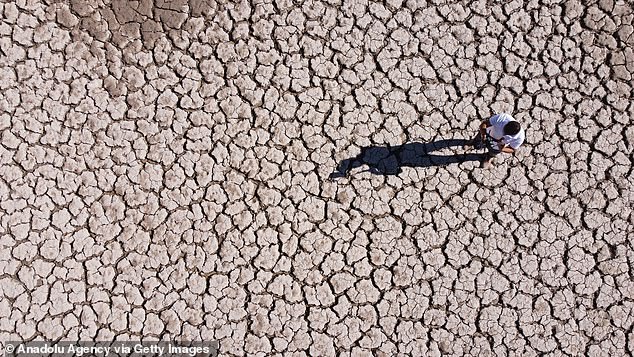 Heatwaves will become so extreme in certain regions of the world within decades that human life there will be unsustainable, a new study has warned. Pictured: An aerial view of the Zernek Dam in Van, Turkey last month, that had almost dried up due to the heat

Projected change in suitability for human habitation in 2070 with warming of between 2°C and 2.5°C above pre-industrial levels, based on temperatures and precipitation levels

Research by the Met Office Hadley Centre claims that temperatures seen this summer in the UK will be an ‘average summer’ by 2035.

This is even if countries meet climate commitments agreed under the 2015 Paris Agreement.

The research looked at how rapidly temperatures are changing across Europe and tracked observed mean summer temperatures since 1850 against model predictions.

It also found an average summer in central Europe by 2100 will be over 4°C hotter than it was in the pre-industrial era.

The authors added: ‘Projected future death rates from extreme heat are staggeringly high – comparable in magnitude by the end of the century to all cancers or all infectious diseases – and staggeringly unequal.

‘On current trajectories, heatwaves could meet and exceed these physiological and social limits in the coming decades, including in regions such as the Sahel and south and southwest Asia.’

The report, titled Extreme Heat: Preparing for the Heatwaves of the Future, has been released ahead of next month’s UN’s COP27 climate change summit in Egypt.

It was put together by the UN’s Office for the Coordination of Humanitarian Affairs (OCHA) and the International Federation of Red Cross and Red Crescent Societies (IFRC).

According to their calculations, 38 heat waves accounted for the deaths of more than 70,000 people worldwide from 2010 to 2019.

This figure reportedly makes up more than one-sixth of the more than 410,000 deaths from disasters linked to extreme weather and climate over the same span.

However, this is still likely an underestimate of the real toll, which is in addition to the fallout on lives and livelihoods.

The authors noted that heatwaves just this year in countries like Somalia, Pakistan and even the USA foreshadow a future with deadlier, more frequent and more intense heat-related humanitarian emergencies.

Many scientists agree that heatwaves have become more frequent because of human-induced climate change.

The combined effects of ageing, warming and urbanisation are likely to cause a significant increase in the number of at-risk people in the developing countries, according to the report.

Bangladesh, for example, experienced as much as a 20 per cent increase in deaths on heat wave days compared with an average day

Agricultural workers, children, the elderly and pregnant and breastfeeding women are at higher risk of illness and death, the report claimed.

‘As the climate crisis goes unchecked, extreme weather events, such as heatwaves and floods, are hitting the most vulnerable people the hardest,’ said UN humanitarian chief Martin Griffiths.

‘Nowhere is the impact more brutally felt than in countries already reeling from hunger, conflict and poverty.’ 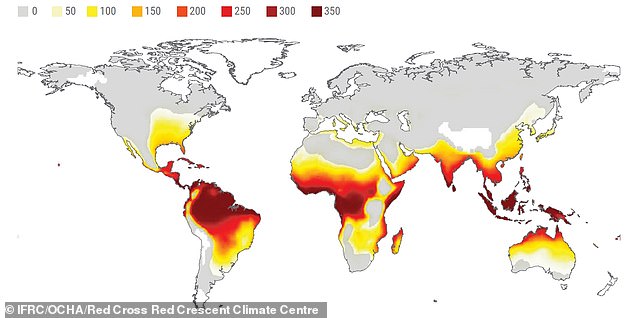 The report was released by the United Nations and Red Cross, and said extreme heat events will trigger ‘large-scale suffering and loss of life’ in certain areas. Pictured: Map showing the number of days projected to exceed potentially deadly heat levels per year by 2100 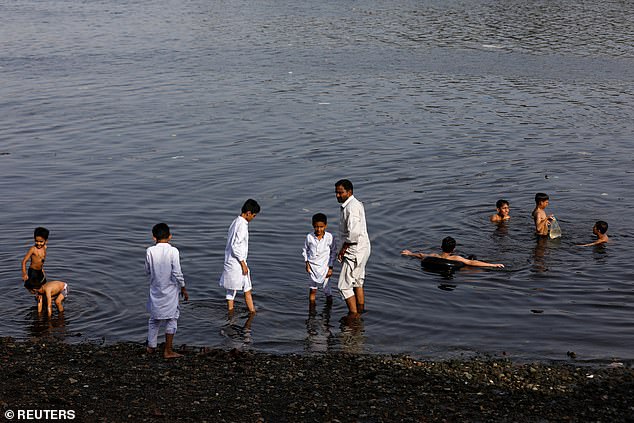 Agricultural workers, children, the elderly and pregnant and breastfeeding women are at higher risk of illness and death from extreme heat, the report claimed. Pictured: Swimmers pictured in Karachi, Pakistan during a period of extreme heat this April

To conclude the report, the authors outline five main steps to help combat the impacts of extreme heatwaves.

These include providing early information to help people and authorities react in time, and finding new ways of financing local-level action.

This relies on better coordination between humanitarian groups, development organisations and weather experts.

IFRC Secretary-General Jagan Chapagain said he will urge world leaders at COP27 to invest in climate adaptation and mitigation in at-risk regions.

He said: ‘If communities are prepared to anticipate climate risks and equipped to take action, we will prevent extreme weather events from becoming humanitarian disasters.’

This summer’s droughts in the Northern Hemisphere were made at least 20 TIMES more likely by climate change, study finds

Climate change made the droughts endured in the Northern Hemisphere this year up to 20 times more likely, a study has found.

Greenhouse gas emissions were found to have played a key role in one of the hottest summers ever recorded in Europe, which completely dried out the soils.

Climate scientists with the World Weather Attribution group collected soil moisture level data in June, July and August 2022 across a large area of our hemisphere.

They detected a moisture deficit, and quantified it by analysing weather data and computer simulations to compare today’s climate with that of the 1800s.

Their findings revealed that drought can be expected in the Northern Hemisphere around once in 20 years in today’s climate, which has been warmed 1.2°C by emissions.

Plus, if humans had not warmed the planet, droughts would only have been expected around once in 400 years or less.