Why you shouldn’t sit in front of a bare wall in a video interview: Woke AI that claims to help firms improve diversity when hiring new employees discriminates against candidates for their home decor, study finds

While most job interviews were once face-to-face affairs, during the Covid-19 pandemic there was a surge in the number of interviews taking place online.

Amid this rise, many companies started using AI tools to sift through candidates before they were interviewed by a human.

These tools are marketed as unbiased against gender and ethnicity, with developers claiming they can help to improve diversity in the workplace.

However, a new study has warned that using AI in hiring is little better than ‘automated pseudoscience’.

Researchers from the University of Cambridge found that. during video interviews, AI tools tend to favour people sitting in front of bookshelves, people wearing headscarves, and those without glasses. 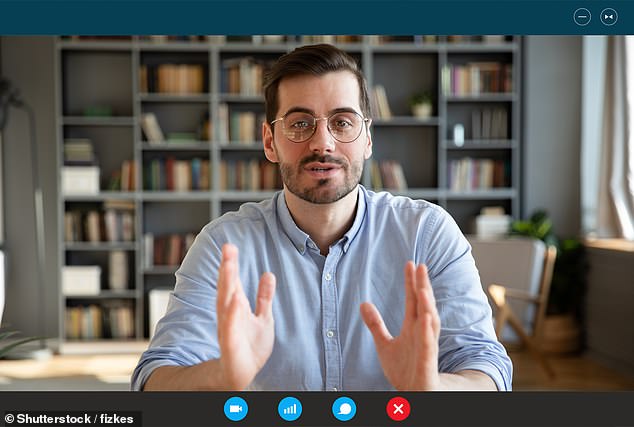 Researchers from the University of Cambridge found that during video interviews, AI tools tend to favour people sitting in front of bookshelves (stock image)

How to impress AI recruitment tools

1. Ditch the glasses – people are seen as more conscientious without specs

2. Wear a headscarf – you’ll be seen as less neurotic

‘All too often, the hiring process is oblique and confusing,’ said Euan Ong, one of the researchers on the study.

‘These tools are trained to predict personality based on common patterns in images of people they’ve previously seen, and often end up finding spurious correlations between personality and apparently unrelated properties of the image, like brightness.’

Many firms use AI tools to analyse candidates in video interviews, with technology now able to assess vocabulary, speech patterns and even micro-expressions.

A 2020 study of 500 organisations in five countries found 24 per cent of businesses have implemented AI for recruitment purposes, while 56 per cent of hiring managers planned to adopt it in the next year.

Meanwhile, another poll conducted in April 2020 found that 86 per cent of organisations were incorporating new virtual technology into hiring practices.

‘This trend was in already in place as the pandemic began, and the accelerated shift to online working caused by COVID-19 is likely to see greater deployment of AI tools by HR departments in future,’ said co-author Dr Kerry Mackereth.

While advocates for the technology claim it’s a way to reduce biases against gender and diversity, researchers from the University of Cambridge claim it’s a dangerous example of ‘technosolutionism’.

This is turning to technology to provide quick fixes for deep-rooted discrimination issues that require changes to company culture. 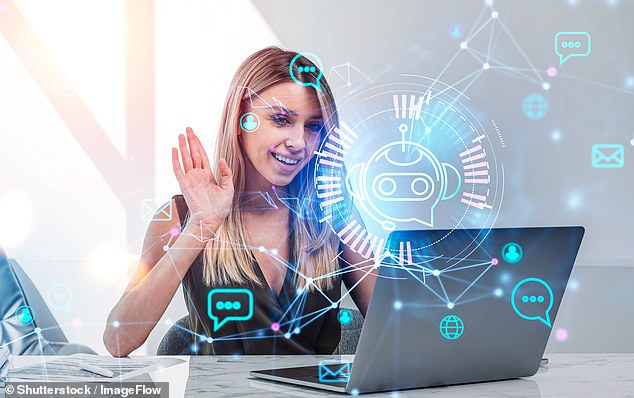 Many firms now use AI tools to analyse candidates in video interviews, with technology now able to assess vocabulary, speech patterns and even micro-expressions (stock image)

Lawyers could have electronic chips implanted in their BRAINS

Electronic brain implants could allow lawyers to quickly scan years of background material and cut costs in the future, a new report claims.

The report from The Law Society sets out the way the profession could change for employees and clients as a result of advances in neurotechnology.

It suggests that a lawyer with the chip implanted in his or her brain could potentially scan documentation in a fraction of the time, reducing the need for large teams of legal researchers.

‘Some lawyers might try to gain an advantage over competitors and try to stay ahead of increasingly capable AI systems by using neurotechnology to improve their workplace performance,’ wrote Dr Allan McCay, the author of the report.

As part of the study, the researchers built an AI tool modelled on the technology, which is designed to assess the ‘Big Five’ personality traits – openness, conscientiousness, extroversion, agreeableness and neuroticism.

By feeding the AI images of different faces in front of different backgrounds, the researchers were able to demonstrate how arbitrary changes could give radically different personality readings.

For example, people were rated as more conscientious when they were sitting in front of a bookcase or art than against a bare wall.

The findings suggest that using AI to narrow candidate pools may ultimately increase uniformity, rather than diversity in the workplace.

It also means that people with the right training and background could ‘win over the algorithms’ without actually having the desired characteristics.

‘We are concerned that some vendors are wrapping “snake oil” products in a shiny package and selling them to unsuspecting customers,’ said co-author Dr Eleanor Drage.

‘By claiming that racism, sexism and other forms of discrimination can be stripped away from the hiring process using artificial intelligence, these companies reduce race and gender down to insignificant data points, rather than systems of power that shape how we move through the world.’

Based on the findings, the researchers are calling on the developers of these AI recruitment tools to be more open about how they actually work.

‘While companies may not be acting in bad faith, there is little accountability for how these products are built or tested,’ Dr Drage added.

‘As such, this technology, and the way it is marketed, could end up as dangerous sources of misinformation about how recruitment can be “de-biased” and made fairer.’