NASA combined X-ray data from its Chandra X-Ray Observatory with infrared data from the James Webb Space Telescope to create gorgeous new composite images that it released today – showcasing the capabilities of both instruments.

The space agency’s James Webb, which released its first images to worldwide acclaim in July, was always meant to work in partnership with NASA’s other telescopes and observatories – whether on the ground or in space.

The newly released images depict Webb’s earliest observations, including Stephens Quintet, the Cartwheel Galaxy, SMACS 0723..3-7327 and the Cosmic Cliffs of the Carina Nebula.

NASA’s Chandra was specially designed to capture X-ray emissions from extremely hot areas of the universe. With the combined data from Chandra, higher-energy process can be seen that aren’t visible in the James Webb’s infrared view.

The James Webb’s primary mirror intercepts red and infrared light traveling through space and reflects it onto a smaller secondary mirror. The secondary mirror then directs the light into the scientific instruments where it is recorded. 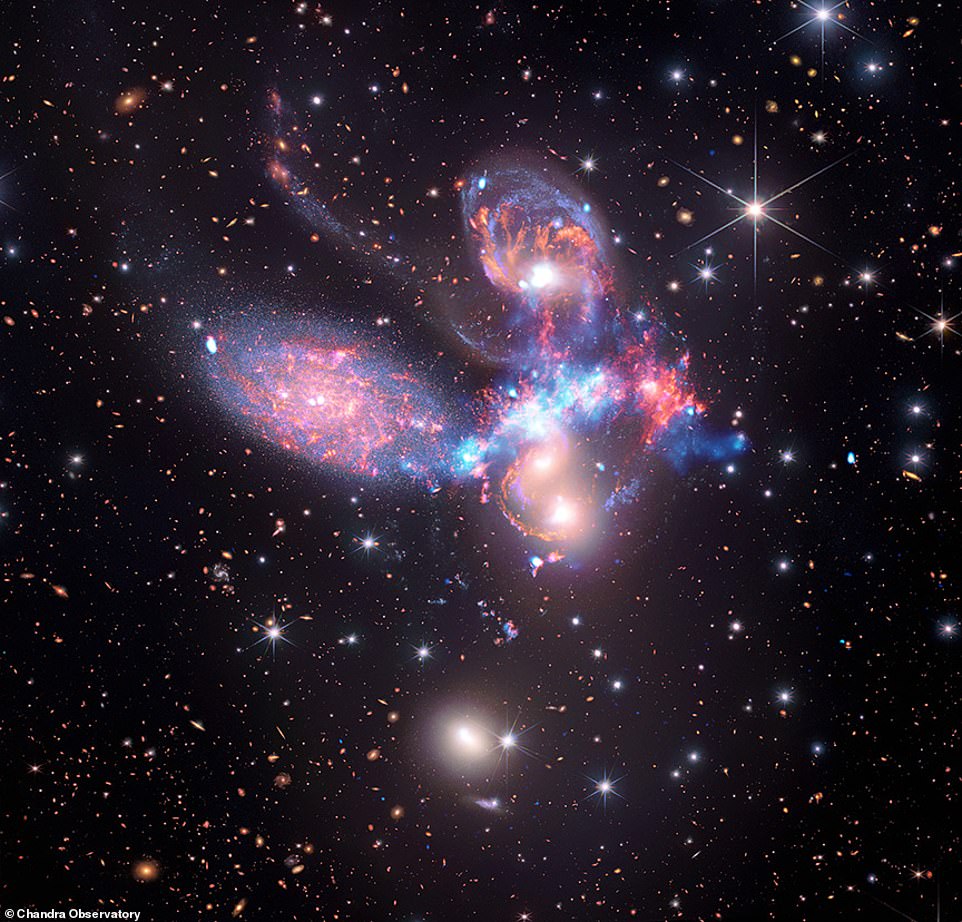 The four galaxies within Stephan’s Quintet are undergoing an intricate dance choreographed by gravity.

‘The Webb image (red, orange, yellow, green, blue) of this object features never-seen-before details of the results of these interactions, including sweeping tails of gas and bursts of star formation,’ NASA explains.

‘The Chandra data (light blue) of this system has uncovered a shock wave that heats gas to tens of millions of degrees, as one of the galaxies passes through the others at speeds of around 2 million miles per hour.’ 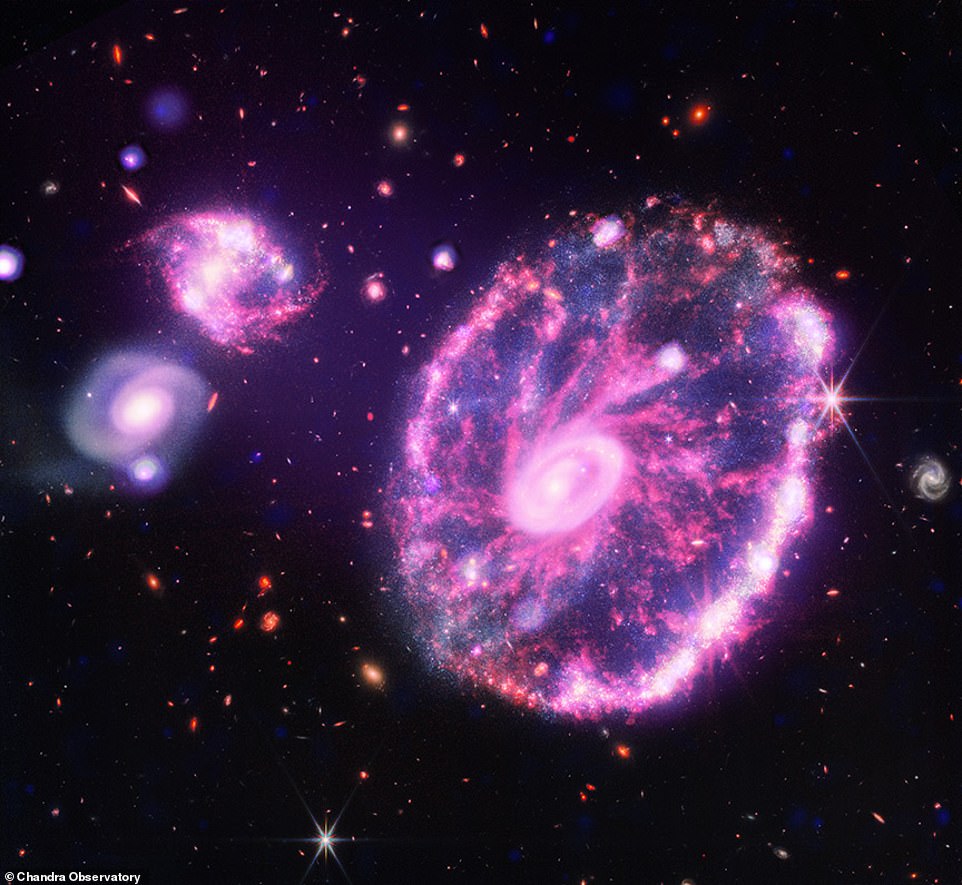 The Cartwheel galaxy gets its shape from a collision with another smaller galaxy about 100 million years ago.

‘When this smaller galaxy punched through the Cartwheel, it triggered star formation that appears around an outer ring and elsewhere throughout the galaxy,’ NASA states in a blog post.

Webb’s infrared view (red, orange, yellow, green, blue) shows the Cartwheel galaxy plus two smaller companion galaxies — which are not part of the collision — against a backdrop of many more distant galactic cousins. 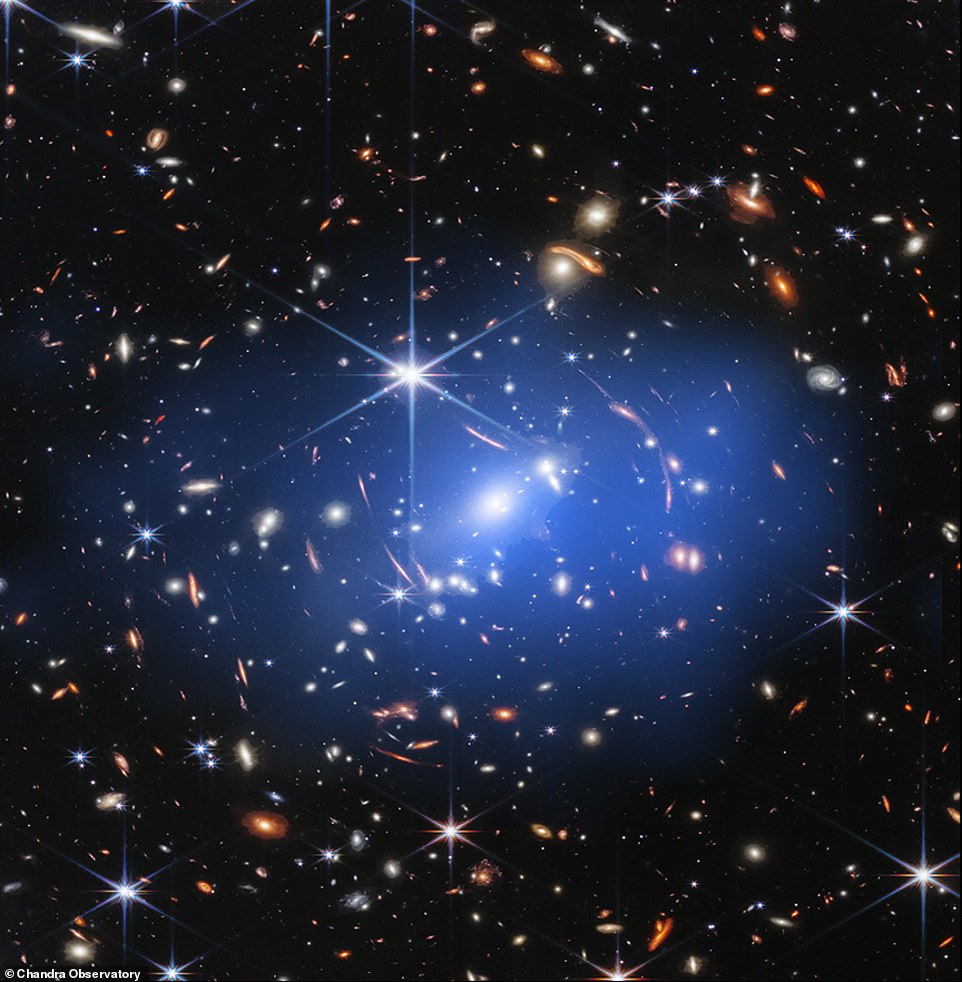 Webb data shows the galaxy cluster SMACS J0723, which is located about 4.2 billion light-years away, containing hundreds of individual galaxies

Webb data shows the galaxy cluster SMACS J0723, which is located about 4.2 billion light-years away, containing hundreds of individual galaxies.

‘Galaxy clusters, however, contain far more than their galaxies alone. As some of the largest structures in the universe, they are filled with vast reservoirs of superheated gas that is seen only in X-ray light,’ NASA notes.

‘In this image, the Chandra data (blue) reveals gas with temperatures of tens of millions of degrees, possessing a total mass of about 100 trillion times that of the Sun, several times higher than the mass of all the galaxies in the cluster. Invisible dark matter makes up an even larger fraction of the total mass in the cluster,’ the space agency explains. 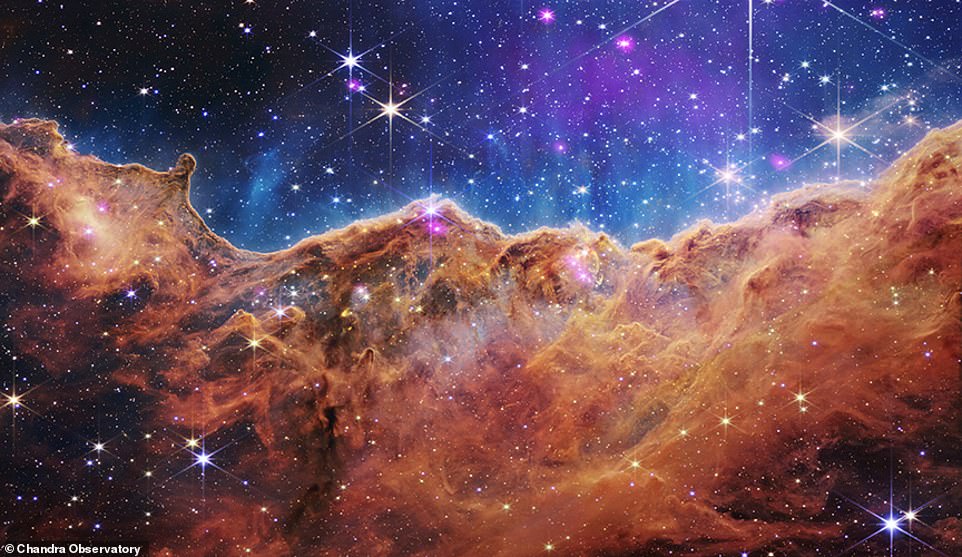 NGC 3324, The Cosmic Cliffs of the Carina Nebula

These are mostly stars located in the outer region of a star cluster in the Carina Nebula with ages between 1 and 2 million years old, which is very young in stellar terms.

Young stars are much brighter in X-rays than old stars, making X-ray studies an ideal way to distinguish stars in the Carina Nebula from the many stars of different ages from our Milky Way galaxy along our line of sight to the nebula.

The diffuse X-ray emission in the top half of the image likely comes from hot gas from the three hottest, most massive stars in the star cluster. They are all outside the field of view of the Webb image. The Webb image uses the following colors: red, orange, yellow, green, cyan, and blue.

The Chandra orbits above Earth at an altitude of 86,500 miles (139,000 km) and the Smithsonian’s Astrophysical Observatory in Cambridge, Massachusetts hosts the center that operates the satellite, processes the data and distributes it to scientists worldwide for analysis.

NASA’s James Webb began transmitting its first image this summer and is expected to provide scientists with many years of discoveries regarding the earliest moments of our universe – just after the Big Bang.