Stress can make people focus more on their spouse’s bad habits – even married couples who are still in the ‘honeymoon period’ of their relationship, study finds

Researchers say this applies even to married couples still in the ‘honeymoon’ period of their relationship.

Past studies have shown that stressful life circumstances can affect how couples interact, but this new one shows that someone experiencing stress is more likely to notice their spouse’s negative behaviour.

Researchers now believe that stress could affect which actions partners notice in the first place.

The negative actions included a spouse breaking a promise, showing anger or impatience, or criticising their partner. 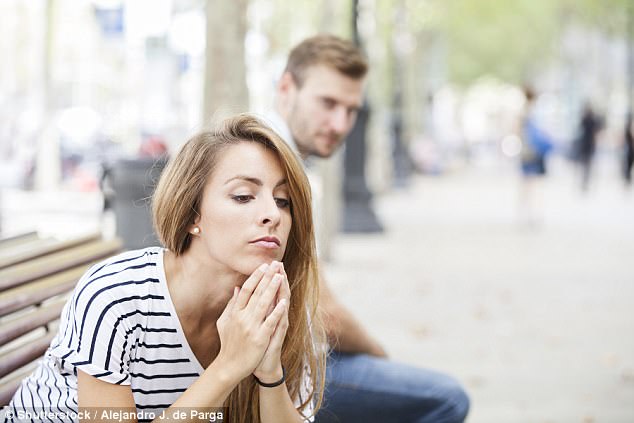 WHAT ARE THE BAD HABITS THAT PEOPLE FOCUS ON IN THEIR PARTNERS?

The negative aspects of a person’s behaviour that people focused on in their lover included:

– A spouse breaking a promise

Study lead author Dr Lisa Neff, of the University of Texas, said: ‘We found that individuals who reported experiencing more stressful life events outside of their relationship, such as problems at work, were especially likely to notice if their partner behaved in an inconsiderate manner.’

The research team asked 79 heterosexual newlywed couples to complete a short survey each night for 10 days, in which they documented both their own and their partner’s behaviour.

Before the study period began, participants completed a questionnaire in which they shared details of stressful events in their life.

Dr Neff said that studying newlyweds drives home the significance of the results, because couples are especially likely to focus on each other’s positive behaviour and overlook negative actions during the ‘honeymoon period’.

‘For many people, the past few years have been difficult — and the stress of the pandemic continues to linger,’ she said.

‘If stress focuses individuals’ attention toward their partner’s more inconsiderate behaviours, this is likely to take a toll on the relationship.’

The researchers found that a single stressful day was not enough to make someone focus on their partner’s negative behaviour, but a longer accumulation of stressful life circumstances could cause a shift in their attention.

While it is possible that being aware of the effects of stress could allow couples to correct their behaviour and limit harm to their relationship, Dr Neff believes this can only be speculated until it is studied further.

She said future research would do well to expand the study beyond the honeymoon phase.

‘One direction would be to examine if the harmful effects of stress might be even stronger among couples no longer in the newlywed phase of their relationships,’ Dr Neff added.

‘But the fact that we found these effects in a sample of newlyweds speaks to how impactful the effects of stress can be.’

The study has been published in the journal Social Psychological and Personality Science.

THE BRAIN IN LOVE

The frontal cortex, vital to judgement, shuts down when we fall in love. MRI scans show this de-activation occurs only when someone is shown a photo of the person they adore, causing them to suspend all criticism or doubt.

Semir Zeki, professor of neuro-aesthetics at University College London, said: ‘When you look at someone you are passionate about, some areas of the brain become active,’ he says. ‘But a large part is de-activated, the part that plays a role in judgement.’

Prof Zeki believes the brain may behave in this way for ‘higher biological purposes’ – it makes reproduction more likely.

If judgement is suspended, the most unlikely pair can get together and reproduce. Someone in love will still be capable of making other major decisions in their lives, from striking a business deal to choosing a new mortgage.

And this sanity makes it harder for friends to convince them ‘they have taken leave of their senses’ when it comes to an ill-advised affair.

Brain scans have also shown the area of the brain that controls fear, and another region involved in negative emotions, close down, explaining why people feel so happy with the world – and unafraid of what might go wrong – when they fall head over heels.