Tintagel Castle is at risk of tumbling into the SEA: Cornwall fortress where King Arthur was conceived could be lost forever as rising seas speed up erosion of the cliffs on which it is built

A castle in Cornwall famous for being the place of King Arthur’s conception is at risk of tumbling into the sea.

According to English Heritage, sea levels are now rising at their fastest rate for nearly three millenia and are increasing the pace of coastal erosion to ‘alarming’ levels.

This is likely the result of climate change and means Tintagel Castle and other coastal sites are at risk of being lost forever.

English Heritage has now launched a multimillion-pound fundraising appeal to fund works to halt the damage and preserve them for future generations.

Director of estates Rob Woodside said: ‘Erosion along England’s coastline is nothing new but the rate of land loss that we have seen over the past few years is alarming, and some scenarios indicate that sea levels could increase by up to a metre by the end of the century.’ 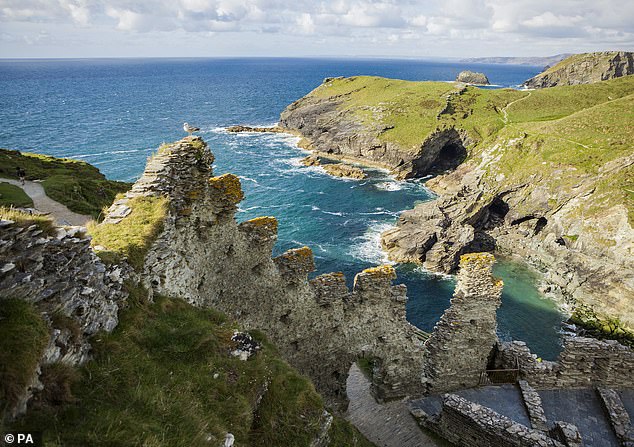 According to English Heritage, sea levels are now rising at their fastest rate for nearly three millenia and is increasing the pace of coastal erosion to ‘alarming’ levels. As a result, Tintagel Castle (pictured) and other sites the charity manages are at risk of being lost forever 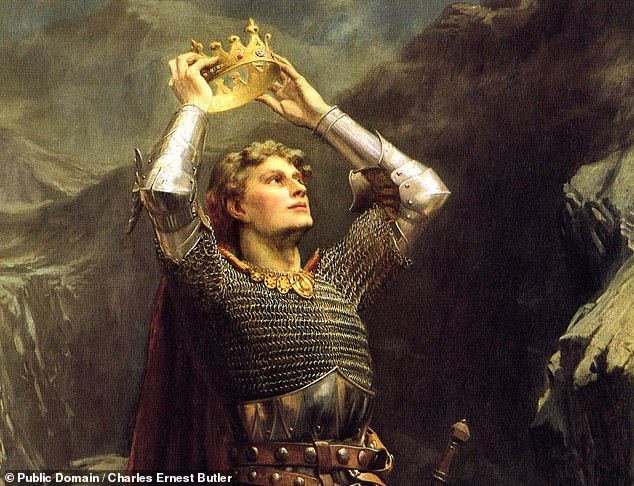 Tintagel Castle has been inhabited since the late Roman period, but it was not until the 12th century that chronicler Geoffrey of Monmoth claimed it was where King Arthur (pictured in artist’s impression) was conceived

THE LEGEND OF KING ARTHUR AT TINTAGEL

Chronicler Geoffrey of Monmoth claimed that King Arthur was conceived at Tintagel Castle.

He wrote the the ancient king of Britain, Uther Pendragon, was driven mad with lust for Ygerna, the wife of one of his barons, Gorlois of Cornwall.

Gorlois prudently removed his wife to an impregnable stronghold on the coast, the castle of Tintagel, but then rather less prudently withdrew to another fortress nearby.

The pursuing Uther and his men inspected Ygerna’s refuge and realise that no ordinary attack can succeed, as the castle was surrounded by the sea and there was only one small entry point that soldiers could guard.

At this point in the story, the ‘prophet’ Merlin proposed a supernatural remedy: by means of a magic potion, he transformed Uther into the exact likeness of Ygerna’s absent husband.

The ruse was entirely successful – the guards of Tintagel allowed him into the castle, and Ygerna took him into her bed.

He continued: ‘To give this some context, last century sea levels rose by 14cm along the southern coast of England.

‘Climate change is accelerating the issues faced by our coastal heritage and creating huge challenges for organisations like English Heritage seeking to protect it.

‘Rising sea levels and more regular storms pose a real risk to the future of many of our sites.’

Tintagel Castle has been inhabited since the late Roman period, but it was not until the 12th century that chronicler Geoffrey of Monmoth claimed it was where King Arthur was conceived.

His mythological account of the history of the kings of Britain – Historia Regum Britanniae – thus cemented the site’s place in the national imagination.

Passages in Monmouth’s book depict how Arthur was conceived at the castle by Uther Pendragon, King of Britain.

The king allegedly used magic potion to turn into the Duke Gorlois of Cornwall in order to seduce his wife, Queen Ygerna.

It is thought this racy legend inspired Richard, Earl of Cornwall, to start building a castle there in the 1230s.

English Heritage said the site has always battled with erosion, with parts of the castle already falling into the sea by the 14th century.

But it said recently parts of the cliff directly in front of the visitors centre had been lost, affecting the viewing area and the coastal path.

It is hoping to raise £40,000 to repair this and the damage caused by last winter’s storms.

Other castles considered to be among the most vulnerable to coastal erosion include Bayard’s Cove Fort near Dartmouth in Devon, which was built in Tudor times to defend the entrance to the Dart Estuary.

Tintagel Castle is situated on a terrace cut from the rocky river bank, making it vulnerable to flooding, English Heritage said.

On the island of St Mary’s in the Isles of Scilly, the Garrison Walls are also at risk.

The walls, which were built to strengthen the island’s defences after the attempted invasion by the Spanish Armada, have ‘pinch points’ which take the full force of the tide and make them vulnerable to erosion.

Hurst Castle in Hampshire, an artillery fortress built by Henry VIII, saw a huge section of the 18th century east wing collapse in February 2021 after the sea undercut its foundations.

English Heritage said work to stabilise the damaged section has been completed, but warned the sea walls around the original Tudor fort are also in urgent need of repair at an estimated cost of £160,000. 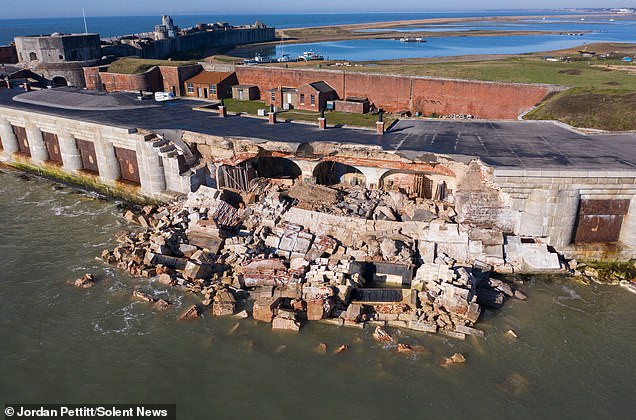 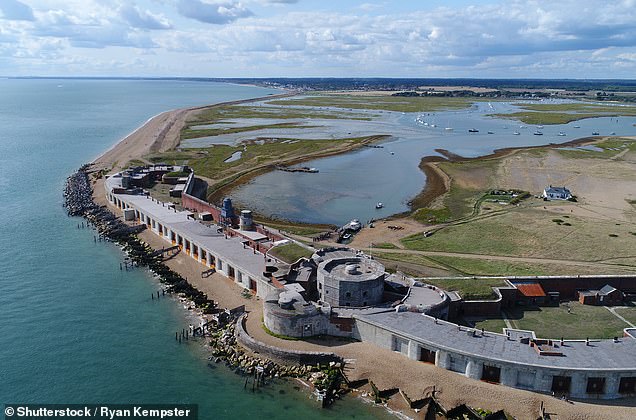 Hurst Castle in Hampshire, an artillery fortress built by Henry VIII, saw a huge section of the 18th century east wing collapse in February 2021 after the sea undercut its foundations. Pictured before (right) and after (left) the collapse of the east wing

Just down the coast, Calshot Castle – another of Henry VIII’s fortifications – is battling erosion, but its low lying site also puts it at risk from flooding as sea levels rise.

In Cumbria, 14th-century Piel Castle stands on a rapidly eroding low-lying island around half a mile from the coast of Morecambe Bay.

Built to guard Barrow-in-Furness against pirates and Scots raiders, swathes of the surrounding island have already been lost, while some of the castle fell into the sea in the 19th century.

In recent years, English Heritage said the sea banks and modern gabion sea defences, loose stones shaped into blocks by wire cages, had been undermined by coastal erosion, costing at least £25,000 to repair.

Mr Woodside said: ‘Hundreds of heritage sites in the UK and around the world are increasingly at risk.

‘If these coastal properties are to survive the coming decades, we will need to strengthen their walls and build sea defences to protect them.

‘It is for this reason that we are launching a public appeal to raise funds for this vital conservation work.’ 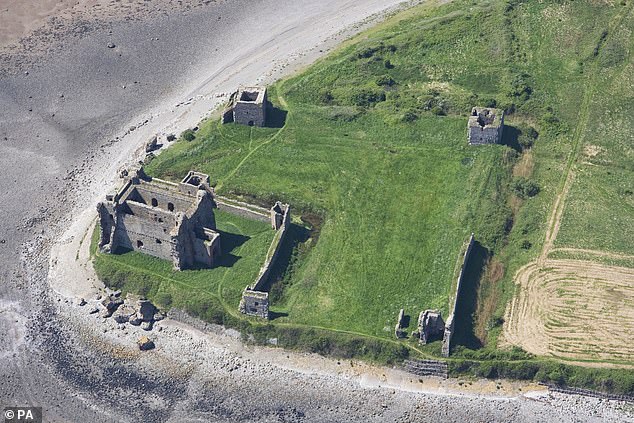 In Cumbria, 14th-century Piel Castle (pictured) stands on a rapidly eroding low-lying island around half a mile from the coast of Morecambe Bay. Built to guard Barrow-in-Furness against pirates and Scots raiders, swathes of the surrounding island have already been lost, while some of the castle fell into the sea in the 19th century

What is coastal erosion? How tides and geology mean some areas are far more at risk of being washed away

The occurrence of coastal erosion is dependent upon the balance between the resistance, or erodibility, of the coastline and the strength, or erosivity, of the waves and tides affecting the area.

These conditions are, in turn, reliant upon a number of factors, including topography, the composition and structure of the geological formations exposed at the coast, the state of man-made coastal defences, local currents and tidal range, wave climate (as characterised by wave height, period, direction and fetch), groundwater, sediment supply, and relative sea level.

Consequently, rates of coastal erosion and accretion are very variable at regional, national and international scales.

Coastal erosion typically results in a landward retreat of the coastline. This can increase the risk of coastal flooding and result in loss of land and damage to buildings, infrastructure and agricultural land.

Sudden coastal erosion events, particularly those in the vicinity of coastal cliffs, may directly endanger the lives of people. The movement of salt-water into freshwater areas (saline intrusion) can occur during coastal flooding and can impact upon the biodiversity of previously freshwater or terrestrial ecosystems.